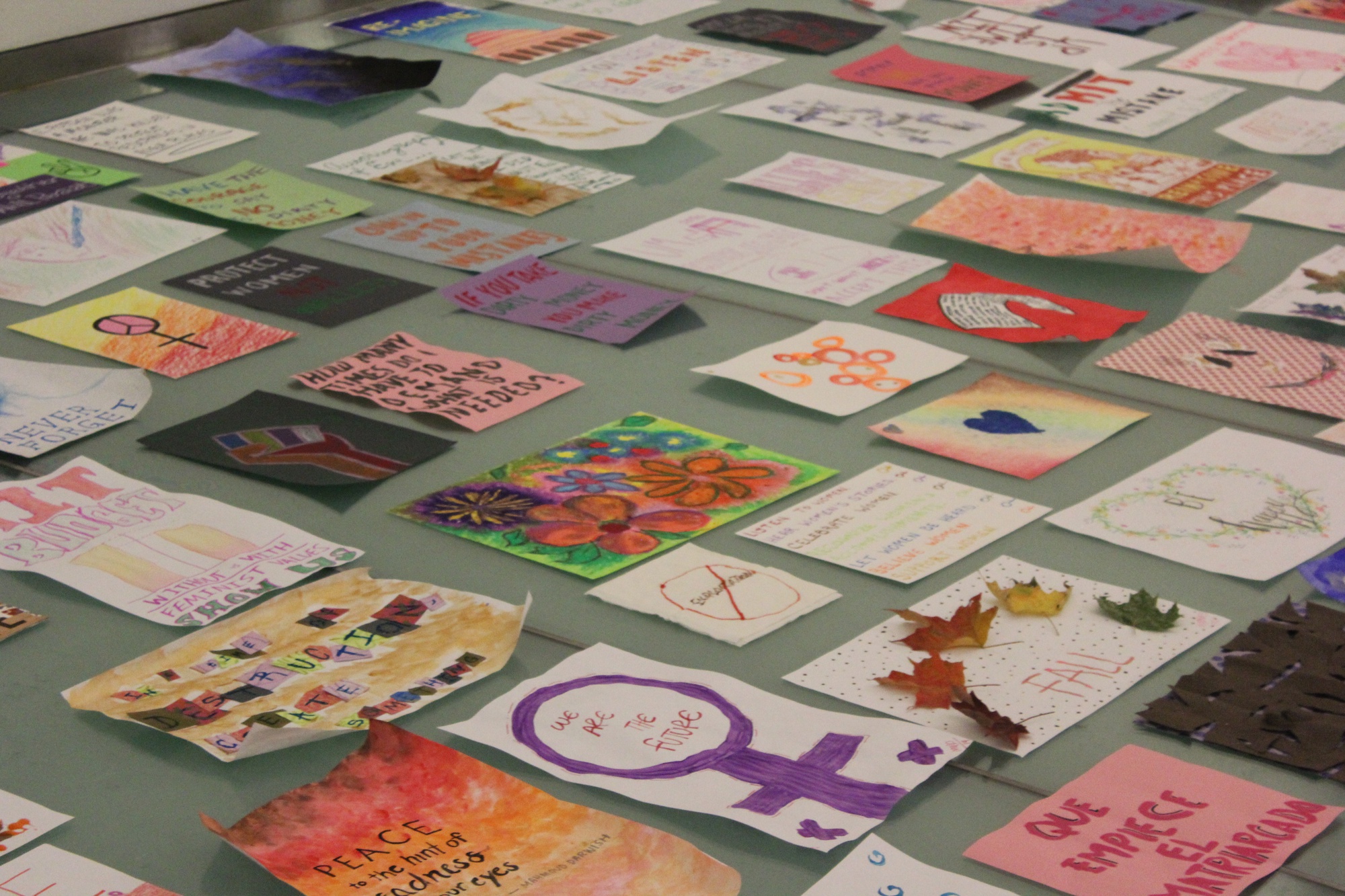 Posters represent the attendees' visions for MIT's future. They will be hung around the MIT Media Lab and MIT's campus. By Courtesy of Cynthia Hua
Advertisement
Advertisement

On Friday, Oct. 18, Media Lab students and staff hosted an event at the Lab called “Reimagine This Place” in response to the recent revelations. Members of the MIT community were invited to make posters that represented their vision for MIT’s future — and the world’s future.
By Malaika K. Tapper

On Sept. 7, Joichi Ito resigned as the director of the MIT Media Lab after revelations that he had accepted more than $7.5 million in donations directed or bestowed by Jeffery Epstein and had deliberately anonymized these contributions, referring to Epstein in emails as “he who must not be named” and “Voldemort.” The leaked emails also revealed that complicity went beyond the Media Lab — members of MIT senior administration, including President L. Rafael Reif, were aware of these gifts, knew Epstein was categorized as a ‘disqualified’ donor in M.I.T.’s official donor database, and helped to conceal Epstein’s identity.

These revelations shook MIT’s campus. Yet many people interviewed for this article agreed that there has been a dearth of channels to voice dissent or process emotions about the controversy. On Friday, Oct. 18, Media Lab students and staff hosted an event at the Lab called “Reimagine This Place” in response to the recent revelations. Members of the MIT community were invited to make posters that represented their vision for MIT’s future — and the world’s future. The signs will be hung on walls around both the Lab and the campus. Donations and proceeds from the event’s refreshments will go to the United Nations Trust Fund for Victims of Human Trafficking.

The event was held on the sixth floor of the Media Lab: an angular, gaping white space. A woman with dangly pink earrings bearing the words “We Resist” chatted with a bartender. Lo-fi beats played in the background. Friends arrived in groups of two and three, mingled, and then settled down at one of the many white tables, each laden with art supplies — one table had colored pencils, one pastels, another watercolors. On one side of the room, the glass wall gave way to the sun setting red over the Charles. A screen dominated the other side of the room. It played a slideshow of images from feminist history. The Women’s March, a sea of pussy hats, and a feminist protest from 1975 flashed across the screen.

Cynthia X. Hua, the head organizer, took a pause from running the event to reflect. “I did hope it would have a more positive vibe,” she said. “[I hope] that it can help people channel their anger and frustration with maybe thinking about how things can be better… because a lot of the recent events.” She paused. “It’s been difficult.”

“Reimagine This Place” joins a long list of MIT student responses to the Epstein case.

In the wake of the revelations, Rodrigo Ochigame, a former researcher at the Media Lab whose work involved artificial intelligence, said two questions loom: “A conversation around institutional complicity with sexual violence, and one around the moral and political implications of corporate, military, and philanthropic sponsorship.”

Ochigame left his position at the Media Lab on Aug. 15, the same day Ito announced his initial apology for taking money from Epstein. But Ochigame’s moral and political objections to the Media Lab’s funding had been building for a long time. In recent years, the Institute has faced controversy regarding their financial ties to the Koch Brothers and Saudi Arabia.

While at the Lab, Ochigame observed first-hand the “intimate and cozy relationship between elite academia and the corporate lobby.”

“I have come to learn,” he said, “that the ethics of AI is a discourse largely promoted by — the MIT-Harvard initiative that I worked for was fueled by — a Silicon Valley lobby seeking to avoid restrictive legal regulations of controversial technologies like facial recognition.”

The MIT Media Lab declined to comment on any of Ochigame’s concerns mentioned in this piece.

With corporate, military, and philanthropic contributions to academic institutions come ethical complications for research agendas. However subtle, donors wield influence over scientists, over the very questions they seek to answer. “It's about who gets picked. What kinds of ideas are 'interesting’?” Ochigame said. “The researcher is still very much responsive to what they think corporate and philanthropic sponsors want to see.”

For Ochigame, the Epstein revelations were the breaking point.

Ochigame is the lead organizer of a campaign called Democratize MIT, whose demands include the creation of a democratically elected committee including students and staff with binding power to determine policy for ethical fundraising at MIT, including the power to veto specific donors and gifts.

Lilly T. Chin is a graduate student at MIT who is also involved with Democratize MIT. Chin was working at a lab adjacent to the Media Lab as the Epstein revelations became public. On Oct. 1, she published an ‘oral history’ of the turmoil, which was widely circulated online. 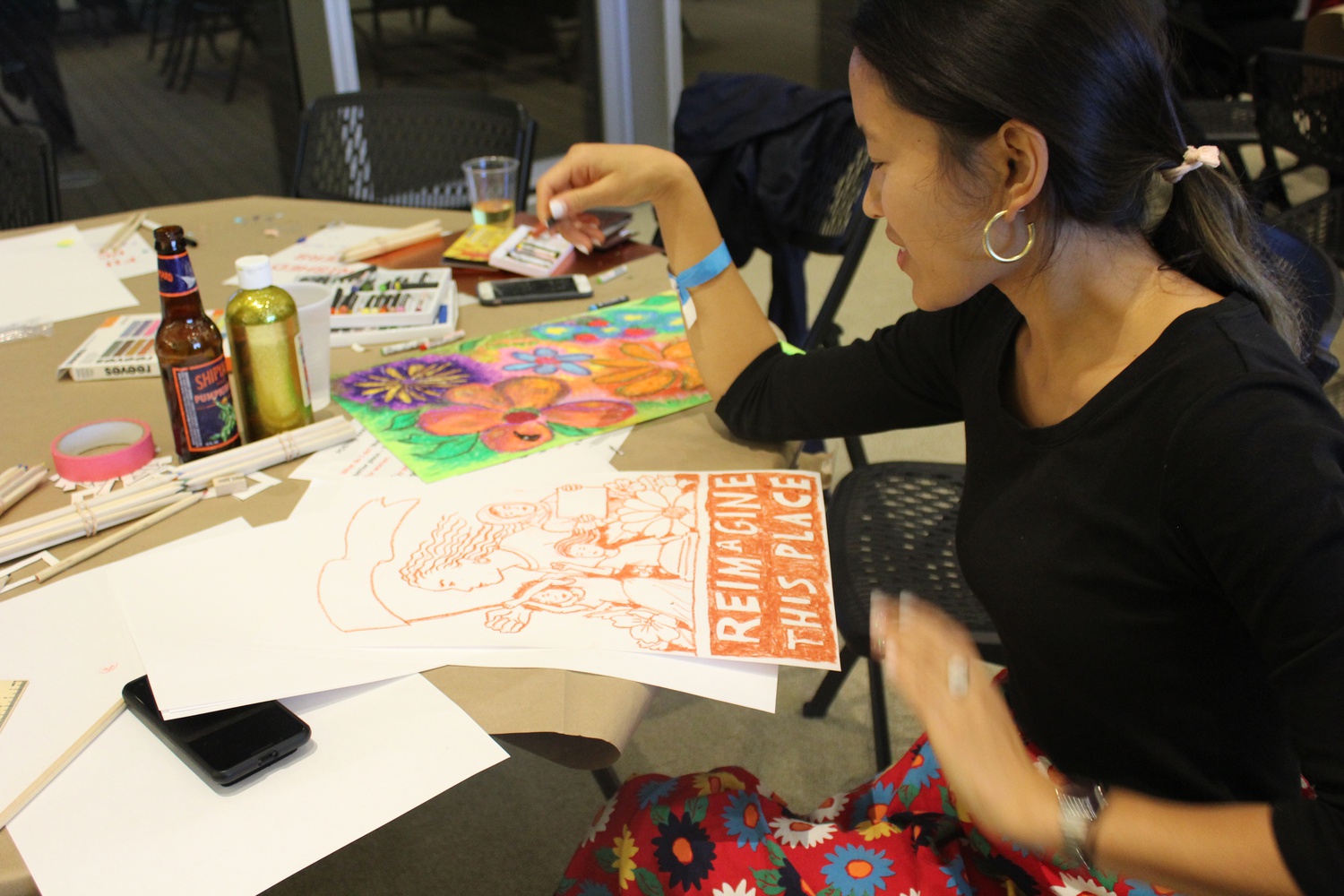 "Reimagine This Place", an event organized by the MIT Media Lab students and staff, is an art-based fundraiser in response to the recent revelations of MIT’s ties to Jeffrey Epstein that attempts to "reimagine this place," referring to both MIT and the larger world. By Courtesy of Cynthia Hua

Like Ochigame, Chin saw the Epstein revelations as “just last straw moments” in a deeper structural tangle of sexism and opacity in funding.

“You could blame federal funding going down so that you have to go to these private donors and then keep them happy. You can blame structuralized misogyny, to the point where you can invite a convicted pedophile [Epstein] to campus while simultaneously saying that you're trying to improve reporting policies,” Chin explained.

Dan D. M. Calacci, a researcher at MIT Media Lab who helped organize “Reimagine This Place,” said that both of these problems are “tied up in the same sort of structural issue, which is the male assumption of power in places like universities.”

“We organizers felt that the administration is considerably more receptive to demands on [sexual violence], for example increased resources for Violence Prevention and Response, which are very important demands, but won't cost the administration much,” Ochigame claimed.

Improving practices for addressing sexual misconduct would not pose an existential threat to MIT, while a structural reorganization of the Institute’s funding policies might.

“One of my lab mates described this as, like, a delayed Me Too Movement for the Academy,” Chin said.

If the Epstein case at MIT represents a version of #MeToo, it is not the #MeToo of accountability for individual instances of misconduct. Rather, it is a structural reckoning with the way misogyny operates at the top administrative level of academic institutions, how misogyny is allowed by the absence of systematic accountability in the acceptance of financial contributions.

Hua sees the Epstein case as an issue of women’s equality — beyond ethical checks on and transparency in the Institute's funding. “It’s reflective of a much larger problem. It's not something that changing funding policies will fix. I think we have to change the way money works in our society and the way society looks at women.”

“Reimagine This Place” was a grassroots event; however, Hua said she worked with an employee at MIT’s Press Office. “Reimagine this Place” is currently the only student-organized event featured on the Media Lab webpage.

The event took place in the Media Lab itself — the belly of the beast. “It's responding to things that happened here, so it should happen here,” Hua said.

“Clearly, the institution is much more receptive and supportive of initiatives that don't link the Epstein case to the broader structural problem,” Ochigame said. From his perspective, MIT is willing to take steps to address misogyny and sexual violence, but not as it pertains to the institution’s cash flow. Chin referred to this as “catharsis without action.”

“I’m not shy about saying [“Reimagine This Place”] is a direct response about that kind of systemic problem,” Calacci said. “We are raising money and in direct response keeping it in people’s minds, giving people space to reflect and think on what both of these things mean.”

“Reimagine This Place” left it up to its attendees to decide whether they saw this #MeToo Movement as one connected with the university’s donation policies or not. As the night wore on, the music bumped, and a little boy in a NASA suit arrived. One person made a poster that declared “Stop Selling out Students;” another read, “How do we know MIT professors were not on that island?” Several posters announced, “The Future is Female.”