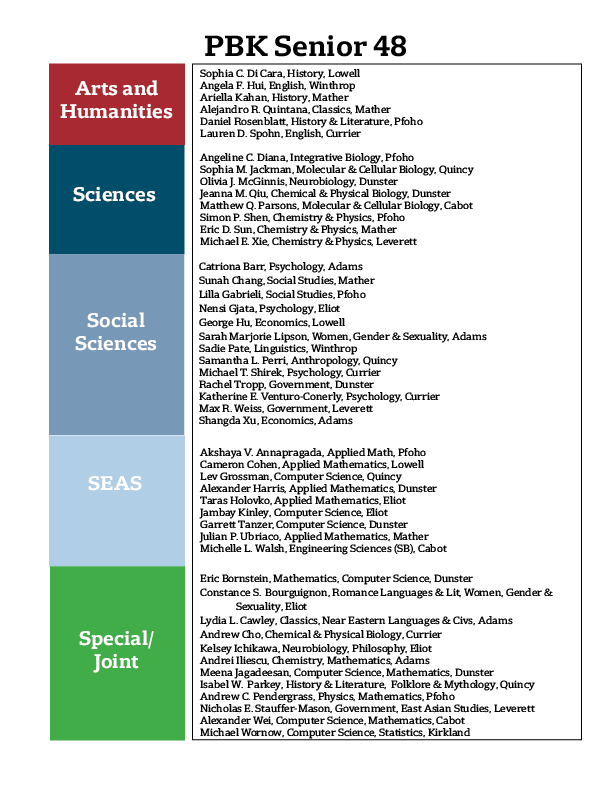 Election indicates that an “undergraduate's course of study is distinguished by excellence, reach, originality, and rigor,” according to the Harvard College Phi Beta Kappa website. Committees of Harvard faculty and staff who are themselves members of Phi Beta Kappa evaluate prospective candidates.

Five of this year’s “Senior 48” concentrate in Applied Math, followed by four students each in both Psychology and Computer Science.

The process for selecting the new inductees started approximately a month ago, when the Alpha Iota chapter president invited students with high GPAs to apply. Three evaluating committees — Humanities, Natural Sciences, Social Sciences — are formed which then pare down the list of candidates using their academic records and letters of recommendation.

“I got the invitation to apply a few weeks earlier,” Molecular and Cellular Biology concentrator Sophia M. Jackman ’20 said. “It was super exciting to be invited to apply to begin with and then it felt incredible to have actually gotten it.”

Social Studies concentrator Lilla B. Gabrieli ’20 said her professors “flagged that this might be something on the horizon.” Her thesis adviser later wrote her a letter of recommendation.

Many learned of their induction early in the day Nov. 4.

“I found out when I first checked my email the morning it was released,” Government concentrator Rachel F. Tropp ’20 said. “I was on my way to class. It was really exciting.”

Nicholas E. Stauffer-Mason ’20, a joint concentrator in Government and East Asian Studies, wrote in an email that he discovered his induction after completing a tutoring session at the Writing Center.

“The first thing I did was call my grandmother, who was Phi Beta Kappa at DePauw and has always pushed me to do my best academically,” Stauffer-Mason said.

The selection committee looks for students who have exhibited both “depth of study and breadth of intellectual interest,” according to the College’s PBK website.

Several of the new inductees said they have pursued studies in a variety of fields and that the honor affirmed their academic choices.

Michael T. Shirek ’20 — a Psychology concentrator pursuing a secondary in Germanic and Scandinavian Studies — said he hopes to seek a career in film and found the honor to be validating.

“Sometimes it feels like people don’t really want to take me seriously because it doesn't really sound like I’m working towards anything,” Shirek said. “This is a validation of what I’ve done so far for me — that what I’ve done has been worth it.”

Similarly, Studies of Women, Gender, and Sexuality concentrator Sarah M. Lipson ’19-’20 said she has wide-varying interests. Lipson, who is conducting thesis research based in psychology as a pre-med, said she found her academic interests “a little bit tough making everything fit.”

Lipson said she is honored and appreciative to be inducted into PBK.

“I think it’s a nice recognition of all the hard work I’ve put in, and I do hope it recognizes the diversity of experiences I’ve had in the academic sphere,” Lipson said. “At the same time, I also feel aware that this is only one way for that to be recognized.”

“I try to balance an appreciation for the recognition and an understanding of all the other fantastic people and experiences that happen at Harvard," she added.

A complete list of the members of the Class of 2020 elected to the “Senior 48” is below: