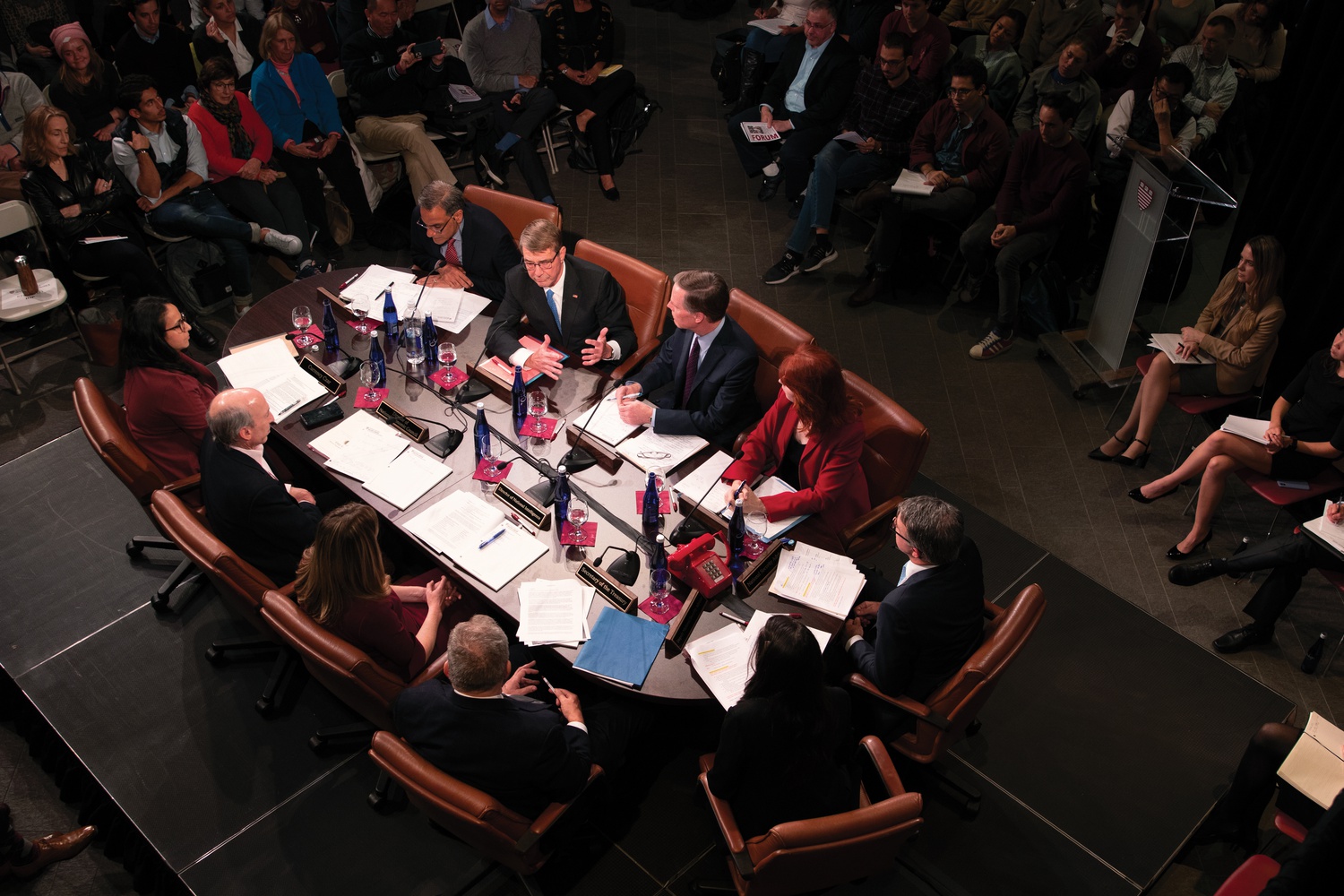 Former U.S. Secretary of Defense Ash Carter describes strategic security considerations that must be taken into account in a crisis during a national security simulation at the IOP Tuesday evening. By Amy Y. Li
By Virginia L. Ma, Crimson Staff Writer

The simulation took place two years into the future on November 19, 2021. In the scenario, China has hypothetically unveiled a new currency known as the digital yuan and spread this currency to Southeastern Asian countries.

During the simulation, the mock cabinet members, including the National Security Advisor, Secretary of Defense, and Vice President, reacted to breaking news of new North Korean missile tests. The North Korean government evaded economic sanctions levied on them by using the available digital currency to develop the missiles, according to a mock breaking news alert at the beginning of the event.

“We’ll conclude by seeing what our interests are at stake here and trying to come up with options for the President so that we can give her a holistic strategy,” Rosenbach said.

Kennedy School students created the simulation. The students also formulated policy briefs and prepared the participants throughout the week ahead of the event.

Transformed into a mock situation room, the usual stage at the forum was replaced by a long table with the American flag and seal in the background. The principal cabinet members sat around the table during the scenario to re-enact a typical National Security Council meeting.

After more than an hour of debate amongst the experts, the group concluded on a set of recommendations to deliver to the president. Their plan called on the U.S. president to create a line of communication with the Chinese president to prevent the North Korean government from advancing missile development.

“We’re going to talk about new avenues for cooperation...to have them help us stop the North Koreans from using the digital yuan,” Rosenbach said. “Make sure they understand that if there’s a threat to the United States from the North Korean missile program and they have been part of that, knowing of or otherwise, that carries grave strategic consequences for our relationship.”

The group also proposed creating a new digital currency for the United States to rival the hypothetical digital yuan.

Audience members said the unorthodox format of the forum was a draw for them.

Ronald J. Kornish II ’87 said that while he came to see what the situation room re-enactment would look like, what resonated most was the purpose behind the simulation.

“They do these exercises at the Kennedy School to forecast what might happen in the future, and they do it all for the students,” Kornish said. “That’s why people come to learn, that’s why people come back, who’ve taught here. They come back to be on these panels and to make the world a better place.”