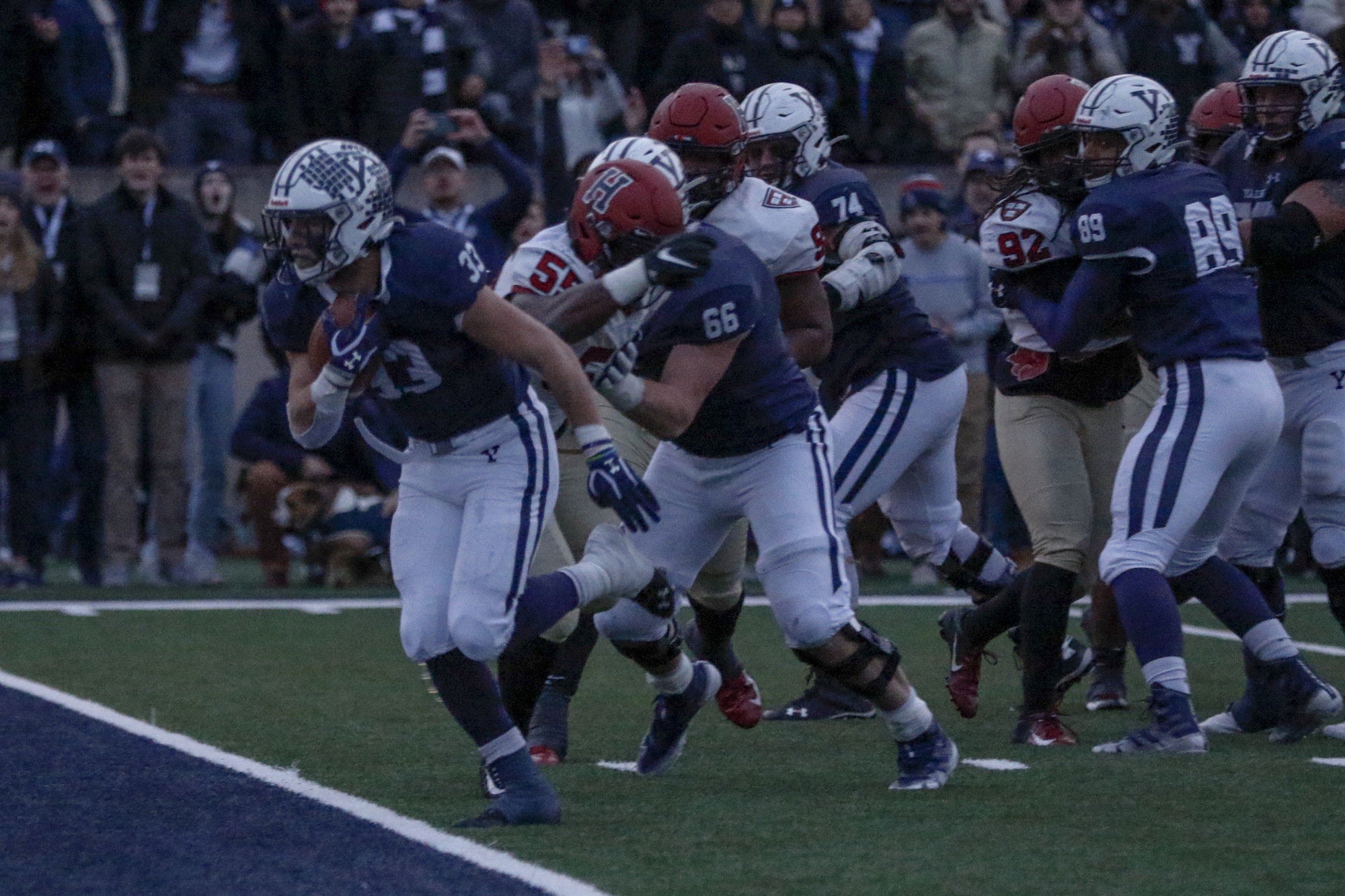 In double overtime, Yale running back Zane Dudek walks into the end zone for the team's winning score. Unequipped with lights, the Yale Bowl descended into darkness Saturday afternoon towards the conclusion of the long contest. By Timothy R. O'Meara
By Cade Palmer, Crimson Staff Writer

NEW HAVEN, Conn. — In a double-overtime thriller, Yale defeated Harvard in the 136th rendition of The Game, 50-43. With the victory, the Bulldogs claim a half-share of the Ivy League title, sharing the honor with Dartmouth. En route to earn the victory, Yale (9-1, 6-1 Ivy) overcame a 19-point deficit, with 17 consecutive points in the fourth quarter alone.

With 1:28 to play, the Bulldogs recovered an onside kick down only seven points, setting up a game-tying drive. Yale quarterback Kurt Rawlings, the division leader in passing efficiency, touchdowns, yardage, and average yards per game, led the Bulldogs to an Ivy League championship on Saturday afternoon.

He threw two passes for 15 and 14 yards to Mason Tipton and Reed Klubnick, respectively, before rushing for 13 himself. With only 18 seconds to play, the senior found JP Shohfi at the one, who fell into the endzone. With the PAT from Sam Tuckerman, Yale tied the contest at 36.

“We don’t really focus on the scoreboard,” Rawlings said. “I mean knowing how much time is left is important. I just tell them, ‘guys, enjoy these last moments enjoy the moments in the game, just take it all in and have fun, do your job and just have fun.’ Win or lose, I love playing the game with these guys.”

The Crimson (4-6, 2-4) received the ensuing kick and kneeled to send the contest into overtime.

As overtime began, light was scarce and the athletes were competing in near darkness. Fans held up their phones with the flashlights on, seemingly to try and brighten the field. The game ran late due to the return from halftime being delayed as a result of divestment protests.

A group of Harvard students stormed the field, unraveling signs calling for Harvard and Yale’s divestment from fossil fuels. After about an hour, the protestors were finally escorted from the turf. As security led people off individually, the crowd booed and chanted, “Get them off the field.”

“You just deal with the circumstances that you have and just deal with it,” Harvard coach Tim Murphy said. “You don’t make a big issue with your team, it just is what it is.”

Rawlings was quick to answer, hitting Shohfi on the Crimson four. Shohfi managed to land one toe on the green turf before flying out of bounds. One play later, Rawlings landed a strike on the slanting Caden Herring, equalizing the contest at 43.

Having defended first, the Bulldogs started with the ball in the second round of overtime. The second play from scrimmage, Rawlings sprinted right and caught an escaping Shohfi, who had slipped behind his coverage man. The completion went for 19 yards and set up a four yard touchdown run from running back Zane Dudek. 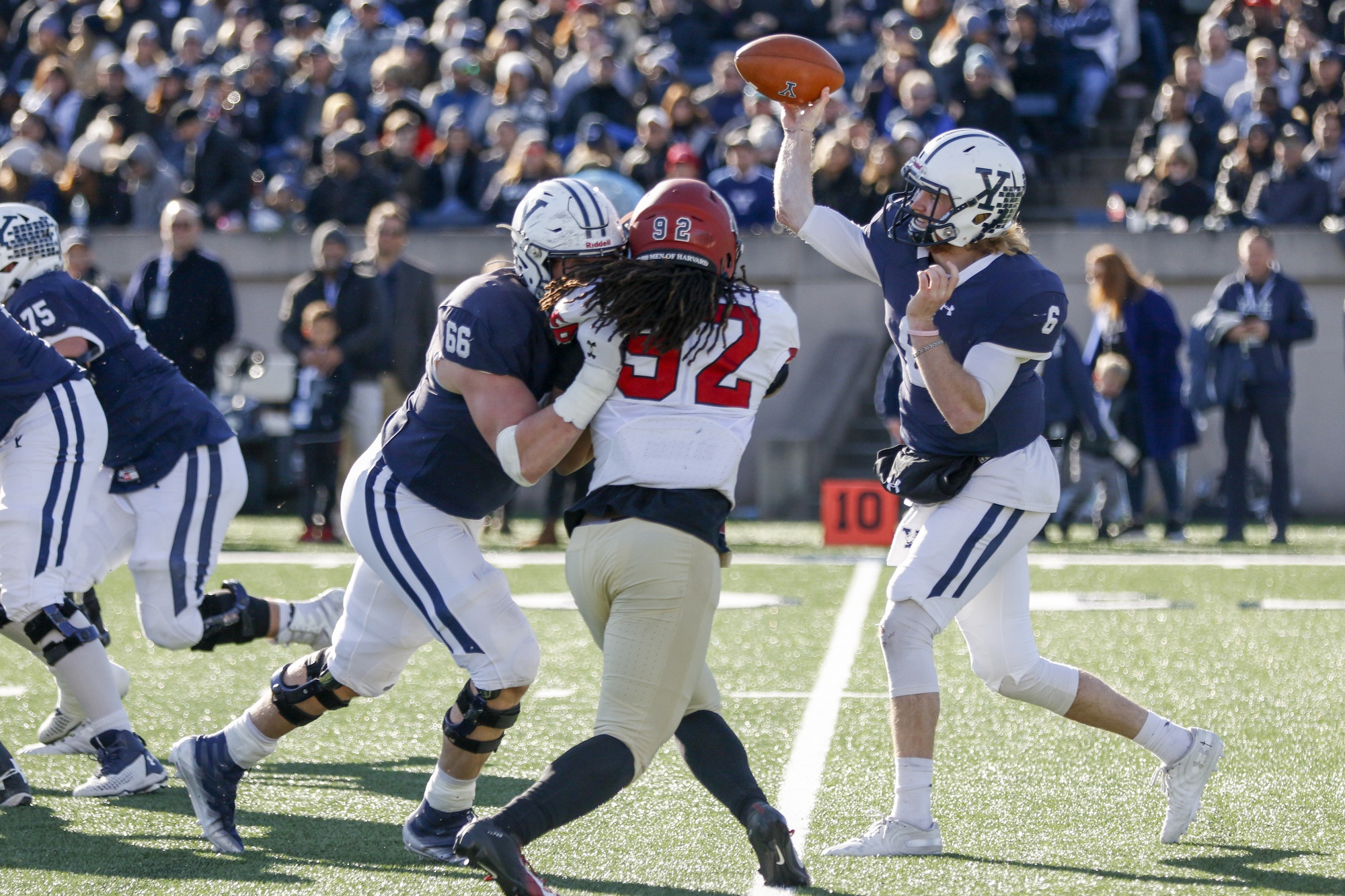 Yale quarterback Kurt Rawlings led the victorious team's offensive production Saturday afternoon. The veteran logged 417 yards and three touchdowns through the air, while also leading the team in rushing with 62 yards and a touchdown on sprints. By Timothy R. O'Meara

That four-yard sprint would ice the game, as Harvard’s ensuing drive resulted in a turnover on downs. For the final play of the contest, Smith went to wide out BJ Watson on a screen pass. Watson made some defenders miss in his four yard trudge up the field, but landed two yards short of the first down marker. The home crowd erupted and leaked over short walls of the stadium, encircling the victorious team.

“I think these three guys right here are the three greatest to ever play at Yale,” said Yale coach Tony Reno gesturing to Rawlings, Klubnick, and Shohfi. “There are a lot of greats, but in my opinion, in my era, they’re three of the greats. If we put the ball in the quarterback’s hands and let these two go again, good things are going to happen.”

The 50-43 final score represents the highest scoring contest between the teams ever. The only other time the two squads played into extra time was in 2005, when the Crimson completed a triple-overtime victory at the Yale Bowl.

Rawlings, in his final contest as a Bulldog, dominated the team’s offensive performance. He threw for 417 yards and three touchdowns. The veteran also led the team in rushing with 62 yards on the turf and additional touchdown.

Coming into the contest, the Bulldogs had all the momentum. On the heels of five straight wins, and Dartmouth’s loss last week to Cornell, all Yale needed to secure a share of the Ancient Eight crown was a win over the Crimson.

Harvard, on the contrary, entered on the cusp of a four-game skid. Playing for nothing but pride, the Crimson team registered its third most rushing yards ever, carried by a career performance from freshman Aidan Borguet. The first-year finished with four touchdowns on 10 attempts, logging 264 yards. By his fourth score, Borguet was averaging 40.3 yards a give.

As Harvard started the second half, leading 15-3, the offense stuttered and went two plays for only four yards. On the third snap, Smith went to the middle of the field. His pass to Watson was knocked down as Kyle Ellis climbed up Watson’s back in an attempt to knock down the throw. A delayed pass interference flag on Ellis saved the Crimson’s errant drive, resetting the downs and pushing the team 15 more yards up field.

Two plays later, Borguet was given the end-around to the left. Outstepping two Bulldog defenders who knipped at his ankles, Borguet found the corner and subsequently shot upfield. As several more defenders attempted to push the back out of bounds, Borguet kept his feet, tip-toeing down the visiting sideline and sprinting past the scrambling defenders into the endzone, a 59 yard run.

Two Bulldog scores later, on only his fifth run of the game, Borguet was dished the ball and simply outran the defense. Taking the end around to the right, Borguet sprinted 60 yards down the sideline to the Bulldog endzone. At this point, Borguet was averaging 35 yards a give.

Between the two Borguet touchdowns, Yale was quick to reverse the momentum back in its favor. A three-play drive falling one yard short of the fourth down led to a Bulldog punt. As freshman receiver Gavin Sharkey flagged down the ball, he mishandled it, giving possession back to the Bulldogs at the visitors’ 30.

Rawlings tossed a wheel route to Klubnick, who managed to battle his way to the Harvard four-yard line. From there, Dudek made quick work of the short field, sprinting in untouched for the score.

The Crimson failed to get anything going on offense and sent the ball back to Yale after three attempts at a first down. On the Bulldogs’ third down, Rawlings went to his favorite receiver, finding Klubnick again on the left sideline. The play-caller perfectly placed the pass just over the arm of the Harvard defender and Klubnick notched 40 yards on the toss. 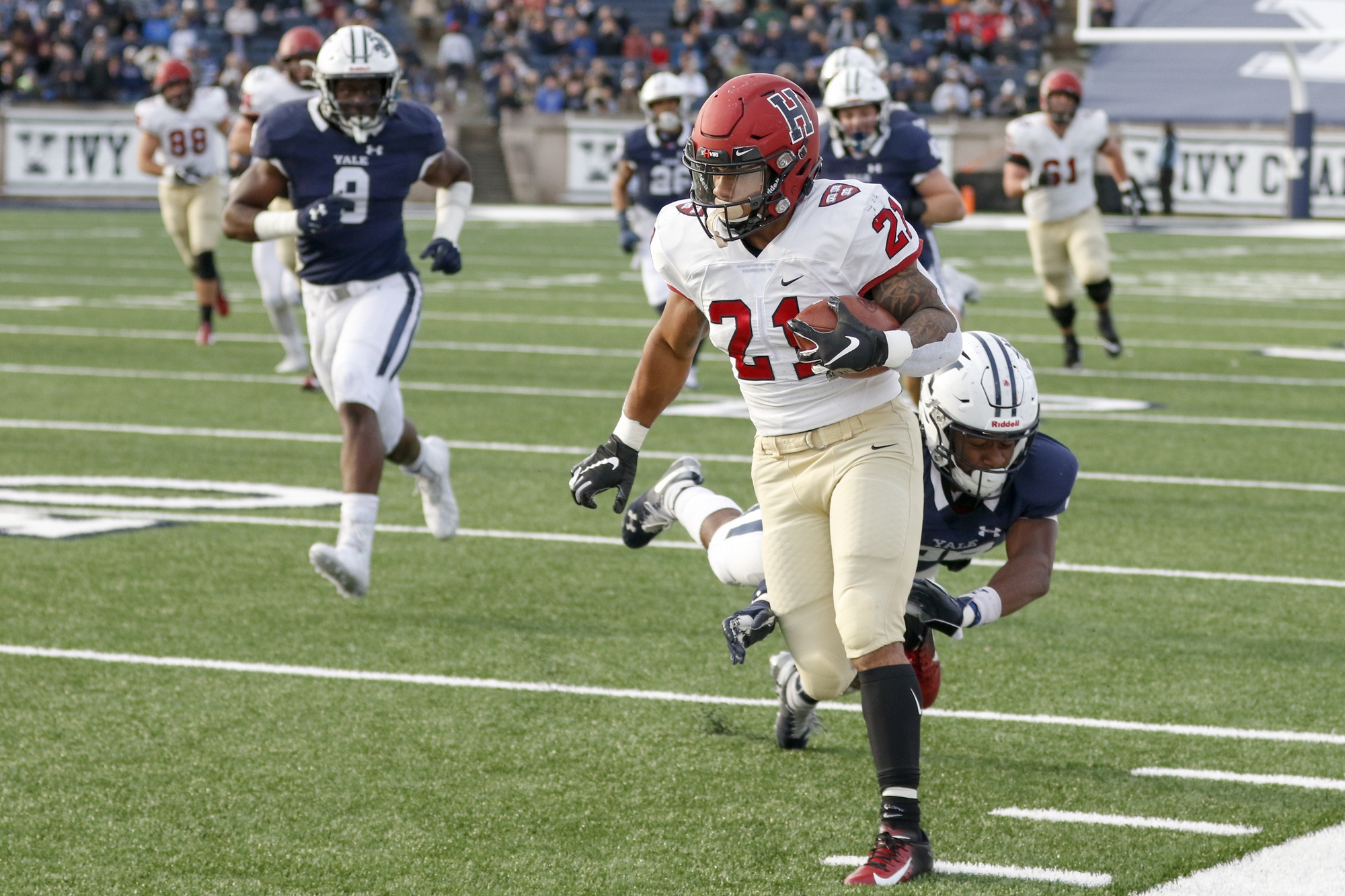 Freshman Aidan Borguet had a career day on Saturday, registering 269 yards and four touchdowns on 11 attempts. The four touchdowns tied a record for the most in a Harvard-Yale game. By Timothy R. O'Meara

The Bulldogs scored again after the second Borguet foot race, this time on a read option run from Rawlings. The home team went for the two point conversion, hoping to bring the game within eight points. The pass attempt was knocked down.

Borguet scored once more to start the fourth. Taking the give up the middle, Borguet looked to be swallowed up. The players nearly stopped moving as the freshman burst from the center of the pile for the 67-yard sprint. With the touchdown, Borguet tied the record for the most rushing touchdowns in a Harvard-Yale game. The Crimson would not break the 17-point Bulldog march to overtime.

Harvard’s defense registered four sacks for 34 lost yards while the Bulldogs managed to pull down Smith only twice. Senior Brogan McParland led the effort, registering two sacks and three additional tackles. Junior defensive back Isaiah Wingfield led the front in tackles, pulling eight Yalies to the ground and logging the team’s only interception of Rawlings in a diving pick.

Harvard’s 4-6 overall record represents the first time the team has posted a losing record since 1998. Harvard did not drop a contest this season by more than a single score.

“Stating the obvious, the cruel ending is just so symbolic of the last half of our season,” Murphy said. “You keep thinking somehow the law of averages is somehow going to work itself out. End of the day, great effort by Yale.”