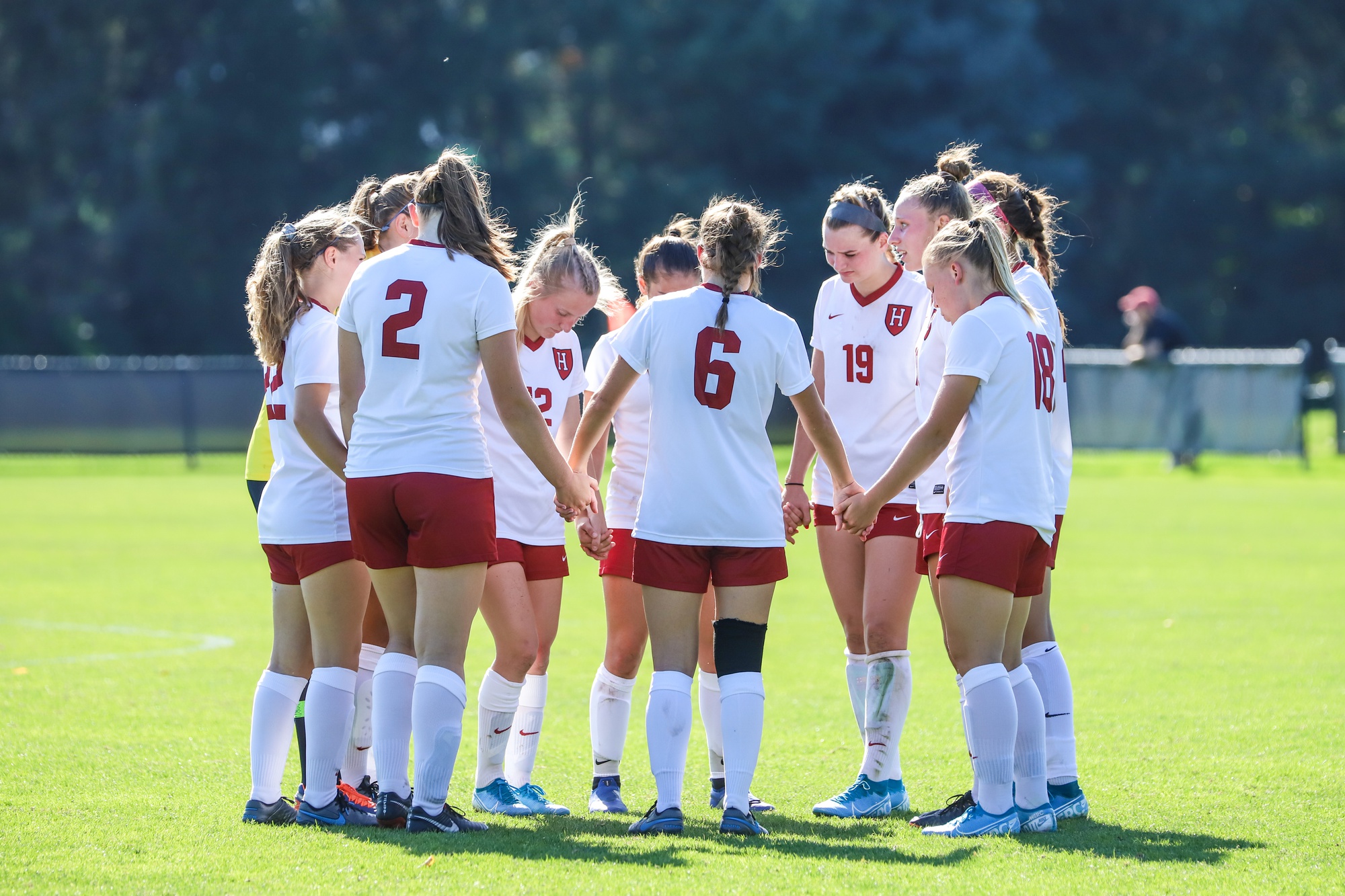 The women's soccer team shut out Dartmouth this past weekend; however, the squad was nonetheless eliminated from championship contention. By Quinn G. Perini
By Lev Cohen

CAMBRIDGE, Mass. — Harvard women’s soccer, propelled by two early goals, defeated Dartmouth 2-0 on a chilly Saturday afternoon. But the league’s other fixtures did not go the Crimson’s way on Saturday, as the combination of Yale’s loss at Columbia and Brown’s controversial win over Penn in the dying moments of double-overtime allowed the Bears to clinch the Ivy League championship on the season’s second-to-last weekend.

Harvard (12-3, 5-1 Ivy) pounced early, scoring on its first shot to jump out to what proved to be an insurmountable lead. In the game’s third minute, sophomore midfielder Sophie Hirst found an open Gabby DelPico 25 yards from the goal. The quick-footed freshman forward took a touch and fired over Brown’s junior goalie Mariel Gordon, who appeared surprised by DelPico’s quick release. It was the Brockton, Mass. native’s third league goal and her seventh overall.

Four minutes later, the Crimson made it 2-0. DelPico found an open Meg Tveit on the left wing, and the senior midfielder quickly slotted the ball in to freshman forward Angela Caloia in the box. Caloia held off a defender with her back to goal before creating an inch of space and firing past Gordon into the top right corner. It was a tidy finish to an incisive team move by the Italian U19 National Team forward, who picked up her second league goal.

“We’ve been working on crossing and kind of getting that front post run, and usually it’s a decoy, but this time Meg had a beautiful ball in and it was just a turn and finish,” Caloia said. “Honestly I don’t really remember [my thought process] but it felt really good and I think the second goal really shifted the momentum.”

Tveit, who had not started since a September 8 victory over Northwestern, had a lot of success on that left flank in the first half as she was often left wide open by a Dartmouth defense that appeared to prioritize shutting down attacks up the middle of the field.

“I think just taking that space, keeping that width is really important for us, so there was a lot of space and it was a fun time,” Tveit said. “I haven’t played a lot, so being able to go out there and play for my team was important.”

Once Harvard was up 2-0, it seemed unlikely that the Big Green (9-6-1, 0-5-1) would be able to get back into the game. But while Dartmouth was unable to add to its paltry total of three league goals on Saturday, the Big Green did begin to control the game after Harvard’s early onslaught, showing off the attacking potential that led to 29 goals in 10 non-conference games.

“They didn’t really have any breakaways, they didn’t really have any clear-cut chances,” head coach Chris Hamblin said. “They had a lot of really good half-chances at our defense that [senior goalie] Kat [Hess] made some nice saves on. I’m just so proud of the way the team was able to defend, although it looked hairy at times. But that’s who we are, and we have to be ok with that.”

After the Crimson took five of the game’s first six shots, Dartmouth outshot the Crimson 12-4 in the game’s final 75 minutes and 7-1 in the second half. Freshman forward Allie Winstanley, in particular, looked threatening, cutting in dangerously and blazing shots high and wide on two separate occasions. But Winstanley, who scored nine goals in 10 non-conference games, remained scoreless in Ivy League play, making it six games and 19 shots without a league goal.

In the second half, Harvard’s tendency to play the ball out from the back nearly cost it. Crimson defenders were caught on the ball a handful of times and played a few dangerous passes that led to Dartmouth chances. But the defense largely shut down the Big Green, and Hess did the rest, earning Harvard its fourth clean sheet in six league games.

The Big Green remain winless in Ivy League play this season, and this was yet another in a series of close defeats for Dartmouth, which has conceded just 10 goals in six league games and has not lost by more than two goals.

“Their record in Ivy League play is not fair because they’ve lost to Princeton in overtime, they’ve lost by a goal to Brown,” Hamblin said. “They’ve really been a really competitive group and they’ve just been missing that final punch. I’m glad they didn’t find that rhythm today, but I’ve got a ton of respect for them.”

While the game was not the walk in the park it seemed set to be early on, the Crimson held serve on Saturday, keeping it in the hunt for a league title until later in the evening. But Yale (11-4, 4-2) lost to Columbia and Brown (13-1-1, 6-0) then edged Penn with a penalty kick with 30 seconds left in the second and final overtime, rendering the final games of the season moot. The referee’s decision to award a penalty kick for a handball was vigorously appealed by Penn’s sideline, to no avail.

Had Yale defeated Columbia, a Bulldogs victory over Brown and a Harvard defeat of Columbia would have created a three-team tie for first and given the Crimson a chance to win on a tiebreak. With Yale’s loss, a Brown loss and Harvard win will create a two-team tie atop the league standings, with the Bears holding the tiebreaker thanks to their win over the Crimson earlier this season.

While the stakes are not quite what they might have been, Harvard will face Columbia (9-3-3, 3-1-2) next Saturday in the hopes of posting its best Ivy League finish since 2016.