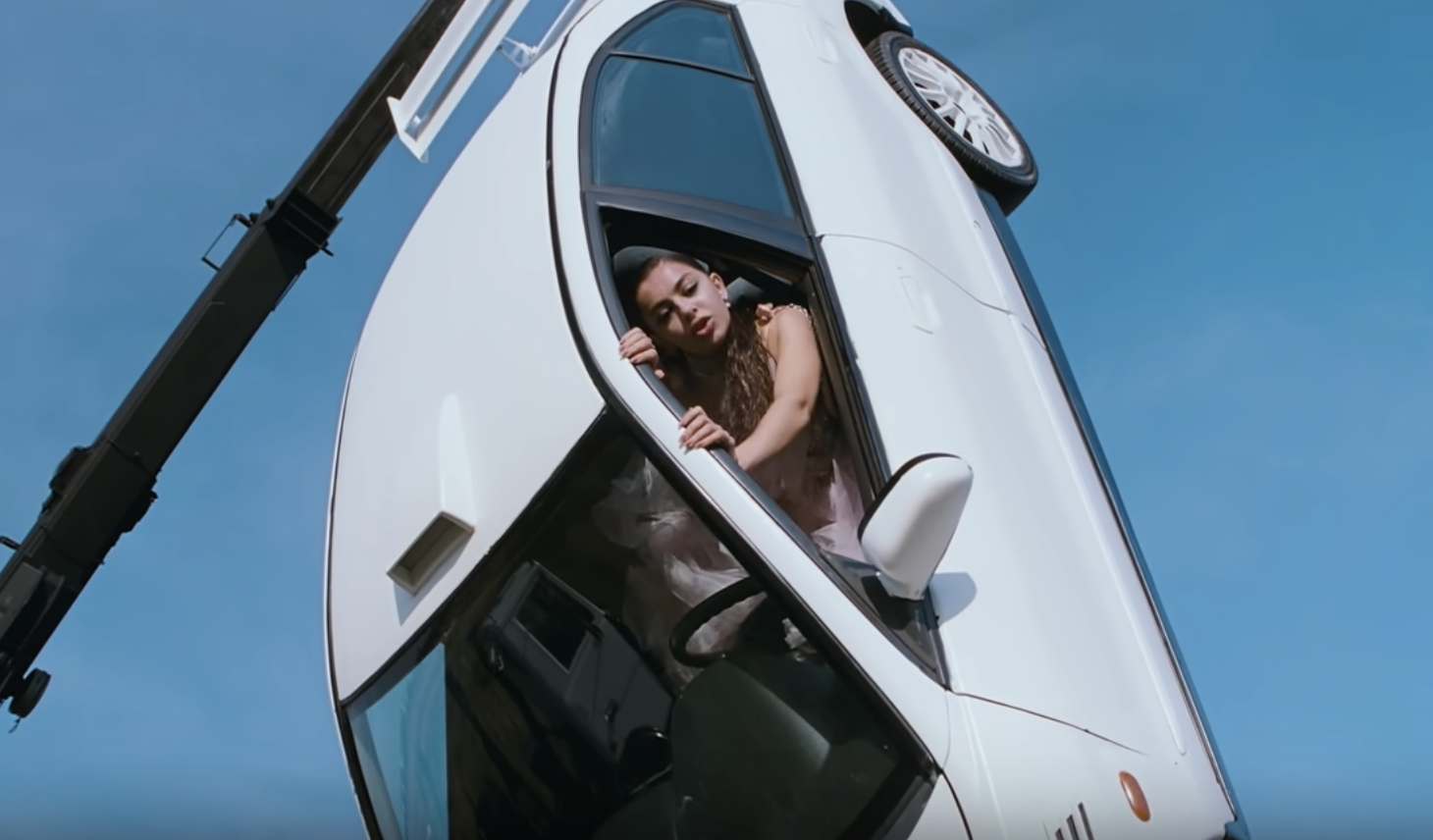 Breaking news: Charli XCX has made landfall. When last we heard from the British boombox pop star, she was jet-skiing around some shallows with Troye Sivan in the appropriately one-note music video for “2099,” an extremely (though not quite literally) one-note song. While it’s great to see her safely ashore in her new video “White Mercedes” it would be even greater to see the change of scenery bring some new ideas.

Instead, it’s déjà vu all over again. If it weren’t well-documented that “White Mercedes” was directed by Colin Solal Cardo and its predecessor by Bradley&Pablo, the two short films could feel like consecutive fever dreams. Both feature excess pastel tulle billowing behind Charli in the breeze. Both feature sultry choreography set atop moving white vehicles sending either dust or spray into massive clouds. Even the admittedly beautiful orbs, which appear in the sky during the new video’s final chorus, mimic the bokeh which begins to pop up near the end of “2099.” At least this time around we’re not supposed to believe Troye is doing flips in the background.

But don’t worry, “White Mercedes” is still Exciting ™. Charli has to sing from a car hanging hood-down, and then the car gets literally run over by a white monster truck, and then the car (somehow suspended once more) catches fire. I mean, we knew there was going to be a white car in the video — who would pass up a chance to use a title literally? — but no one could have predicted what it would do once it got there, nor could anyone have predicted it would be joined by a white horse recently escaped from “Bound 2” by Kanye West.

In a particularly generous reading, the gratuitous “action movie” vibes (as per Rolling Stone) could function as a materialistic cover-up for a complex emotional landscape. “You know I’ve got a suit of armor on,” Charli sings. Maybe the armor is the gown and the fire and the expensive watch and the not-so-subtle Powerbeats Pro product placement. Perhaps the close-up, the handheld shots, and the fireworks reflecting in her stoic eyes reveal her inner turmoil even as her exterior seems cool, calm, and collected. After all, the singer of “White Mercedes” is meant to be an icy expert at avoidance, and if that voice is meant to define the whole of her new album, “Charli,” it would make sense for imagery to repeat from “2099” to its video.

But I’d guess the symbolism was an afterthought to the commercialism, that the problems Charli XCX is blocking out in “White Mercedes” include the seemingly pointless inconsistencies in the video. One particularly obvious example: She sings, “You’re chasing after something that you’ll never catch,” but it looks like the car she’s riding is actually moving pretty slowly. I still probably couldn’t catch it, but I also haven’t been to the gym in three years. More generally, it’s impossible to write off the aesthetic contradictions between the song, a sweeping tech pop ballad with breathily-voiced references to addiction, and the video, an ode to luxury which could neatly double as a perfume ad. The contrast isn’t strong enough to imply an intentional juxtaposition: It just seems like a mistake. Maybe we could shrug and appreciate the glamour in isolation if the family resemblance to “2099” were less pronounced, but as stands, my confusion has an aftertaste of boredom.

The music itself is cool, fresh, inventive. Pitchfork gave “Charli” a 7.8, and if you can’t trust Pitchfork, you can’t trust anyone. I just wish the videos looked the ways the songs sounded. Instead, “White Mercedes” looks like it was designed to produce a compelling thumbnail.