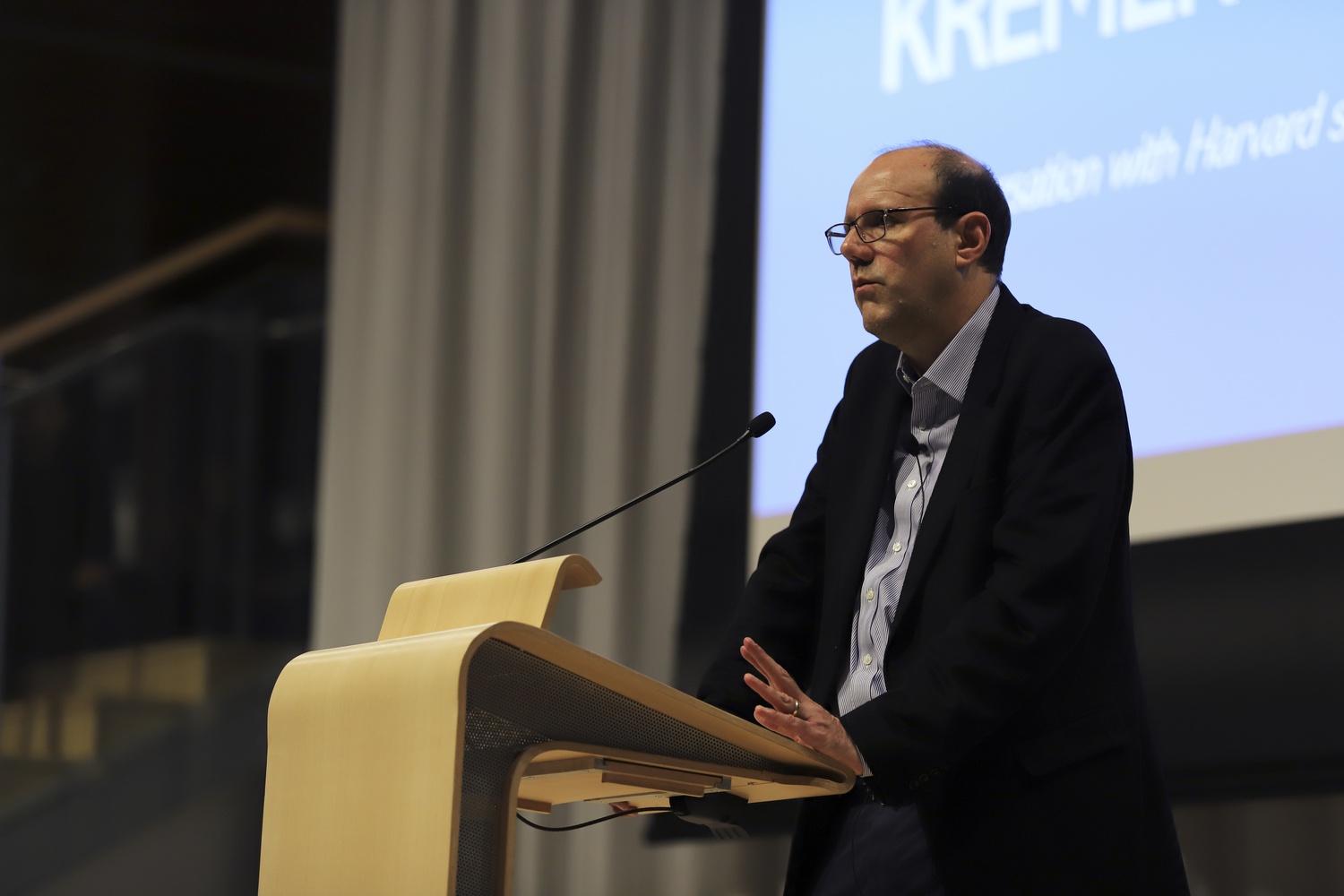 Economics Professor and 2019 Nobel Laureate in Economics Michael Kremer '85 converses with students during an event hosted by the Center for International Development in the Smith Campus Center Tuesday evening. By Amy Y. Li
By Ethan Lee and Andy Z. Wang, Contributing Writers

Economics Professor and 2019 Nobel Laureate Michael R. Kremer ’85 shared insights into his personal journey as an economist and his experimental approach to alleviating global poverty with Harvard students during an event Tuesday afternoon at the Smith Campus Center.

Hosted by the Harvard Center for International Development, the event drew more than 200 attendees to Harvard Commons to hear Kremer speak. Kremer is a member of the CID’s Faculty Advisory Council, which oversees the University-wide research center working on development challenges and solutions to global poverty.

Kremer, along with MIT professors Abhijit V. Banerjee and Esther Duflo, was awarded the Nobel Prize in Economics last month for his research using experimental methods to explore the root causes of poverty in developing countries.

CID Director Asim Khwaja introduced Kremer to the audience, noting how he serves as an example of how research can be used to “make a difference in the world.”

“Michael is out there to save the world. Michael is one of the few academics I know who creates global public goods and impact,” Khwaja said.

Kremer then kicked off the discussion by sharing how he got into the field of international developmental economics, which he attributed primarily to a sense of moral duty he felt as a result of his upbringing.

“I had been interested in international development and cared about it. It’s in part because of how I was raised by my parents as a child, that we have obligations when there are injustices in the world to address them,” Kremer said.

Kremer added that concentrating in Social Studies during his undergraduate career at Harvard helped tremendously in his future work, especially the concentration’s focus on interdisciplinary inquiry.

After graduation, Kremer moved to Kenya, where he helped establish a program called WorldTeach to match Harvard students with schools in need of teachers. After completing his Ph.D. at MIT, Kremer returned to Kenya, where he observed that officials were introducing programs to schools at different rates. This inspired his experimental approach to economic research.

“Part-way through you could compare the schools that had got a particular program to those that hadn’t,” Kremer said, explaining the officials’ process. “This may seem like basic logic to you, but this was not that common at that time.”

After concluding his own story, Kremer took questions from the audience. In response to a question about how researchers come up with “groundbreaking” ideas, Kremer said to focus on pursuing passions.

“I would say choose something that you care about and that’s important,” he said. “‘Care about’ could be this puzzle that you just can’t get out of your head and you want to try to solve.”

In an interview after the event, Kremer said he was excited to host the talk and interface with Harvard students.

“There’s so many talented people in this community, so many people that genuinely care about these issues, and I wanted to be able to interact with them,” he said. “I’m grateful for, as I said, everything that I’ve learned as an undergraduate here, as a grad student here, as a faculty member.”

“I thought it was fantastic. It’s really interesting to see research meet reality, because often in academia those two things tend to separate, and it’s cool to see his life work reconcile those things together,” he said.