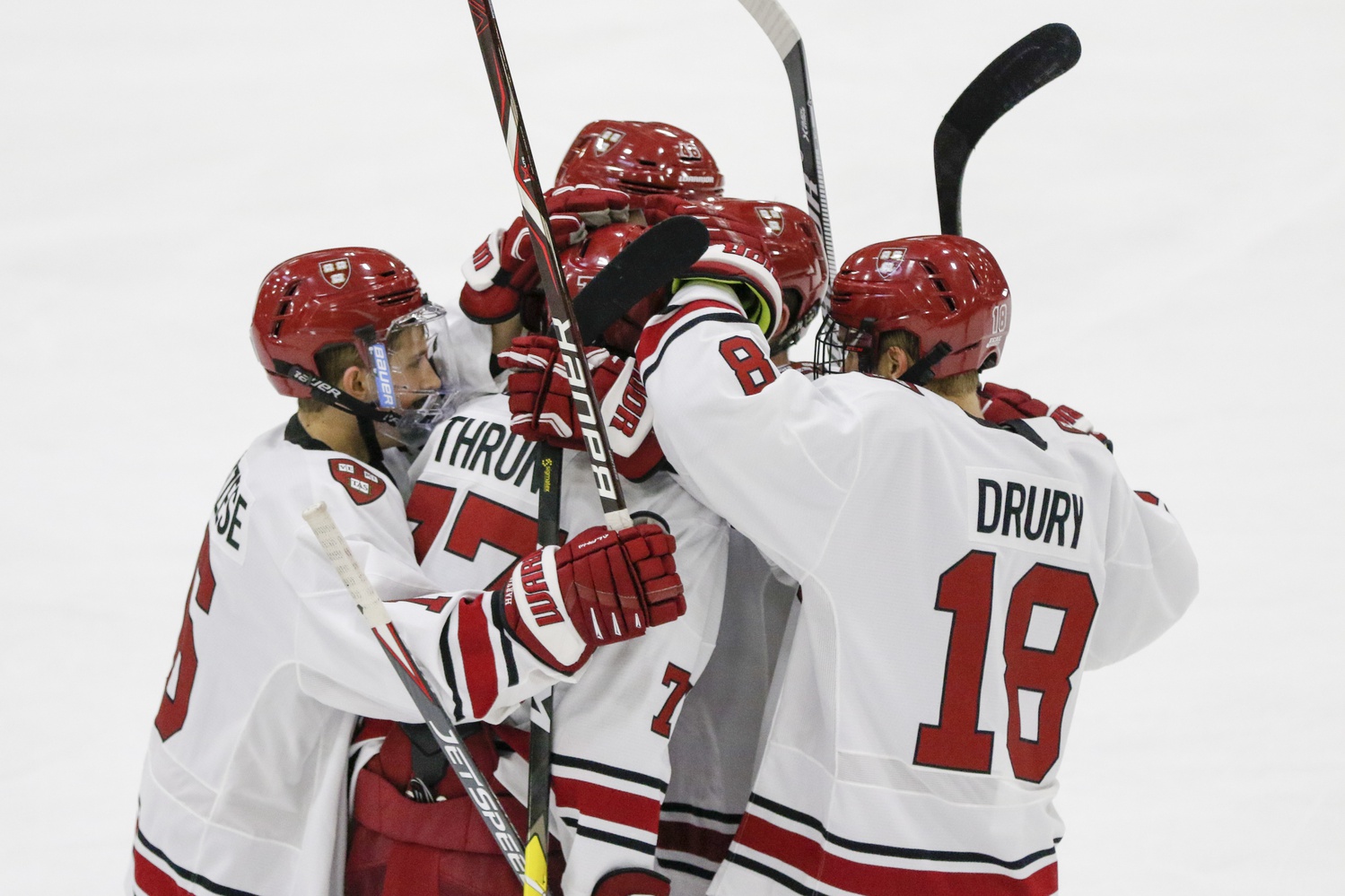 After putting up seven goals in its opening game against Dartmouth, the Crimson will look to bring a balanced, defensive outlook to its next weekend of play. By Timothy R. O'Meara
By Stuti R. Telidevara, Crimson Staff Writer

This weekend, the no. 18/15 Harvard men’s hockey team will take on its first full slate of weekend games, hosting Princeton and no. 15 Quinnipiac. Last year the Crimson faced these same two teams in its second week of play and earned only one point; now, the squad will look to avoid that disappointing result and extend its momentum from last week’s win against Dartmouth.

While the obvious challenge lies with the ranked Bobcats (4-3-0, 0-0 ECAC) on Saturday, the Tigers (1-0-1, 0-0) are hardly easy competition. Both visiting teams have tested themselves against non-conference foes. Harvard (1-0-0, 1-0) will need to ensure that head-start doesn’t put it at a disadvantage.

“Having beat Dartmouth we definitely want to keep that ball rolling and take down Princeton and Quinnipiac this weekend,” said forward and captain Nathan Krusko. “We know it’s going to be a huge test for us...so we want to come out with a huge push early on and just kind of ride the wave.”

The Crimson is focused on putting last week’s up-and-down win behind it and settling into a more controlled, defensive game. In other words, the team hopes not to concede three straight goals in five minutes. Sophomore forward Casey Dornbach (3 A), junior forward Jack Badini (3 A), and sophomore defenseman Jack Rathbone (2 G) will need to show up again. More promising outings from rookies like defenseman Henry Thrun (1–1—2), and forwards Nick Abbruzzese (1–2—3) and John Farinacci (1–1—2) couldn’t hurt either.

On the other hand, junior defenseman Reilly Walsh, who was second in team scoring last season, could make more of a mark this weekend after a quiet night against the Big Green. A boost in Walsh’s production could come with a strong showing on the power play too — the junior paced his squad in man-advantage goals last year.

“Coach has made it a point of emphasis that [scoring seven goals is] not the norm and we’re going to really have to work to score against Princeton and Quinnipiac this weekend,” Krusko said. “So, just getting in the dirty areas, making sure we capitalize [on] our chances when we get them, and staying positive through the entire game.”

Whether or not Harvard will choose to make a change in net remains to be seen. Senior Cameron Gornet (3 GA, .936 SV%) earned the start last Friday, but the team has another option in freshman Mitchell Gibson.

“There’s a benefit to having that position have some competition,” head coach Ted Donato ’91 said. “Cam, I think, had some ups and downs in the game, but I really liked the way he pulled it together in the third, and...he deserved that first game. ...The reality is, we want to play, on each and every night, who we think gives us the best chance to win.” 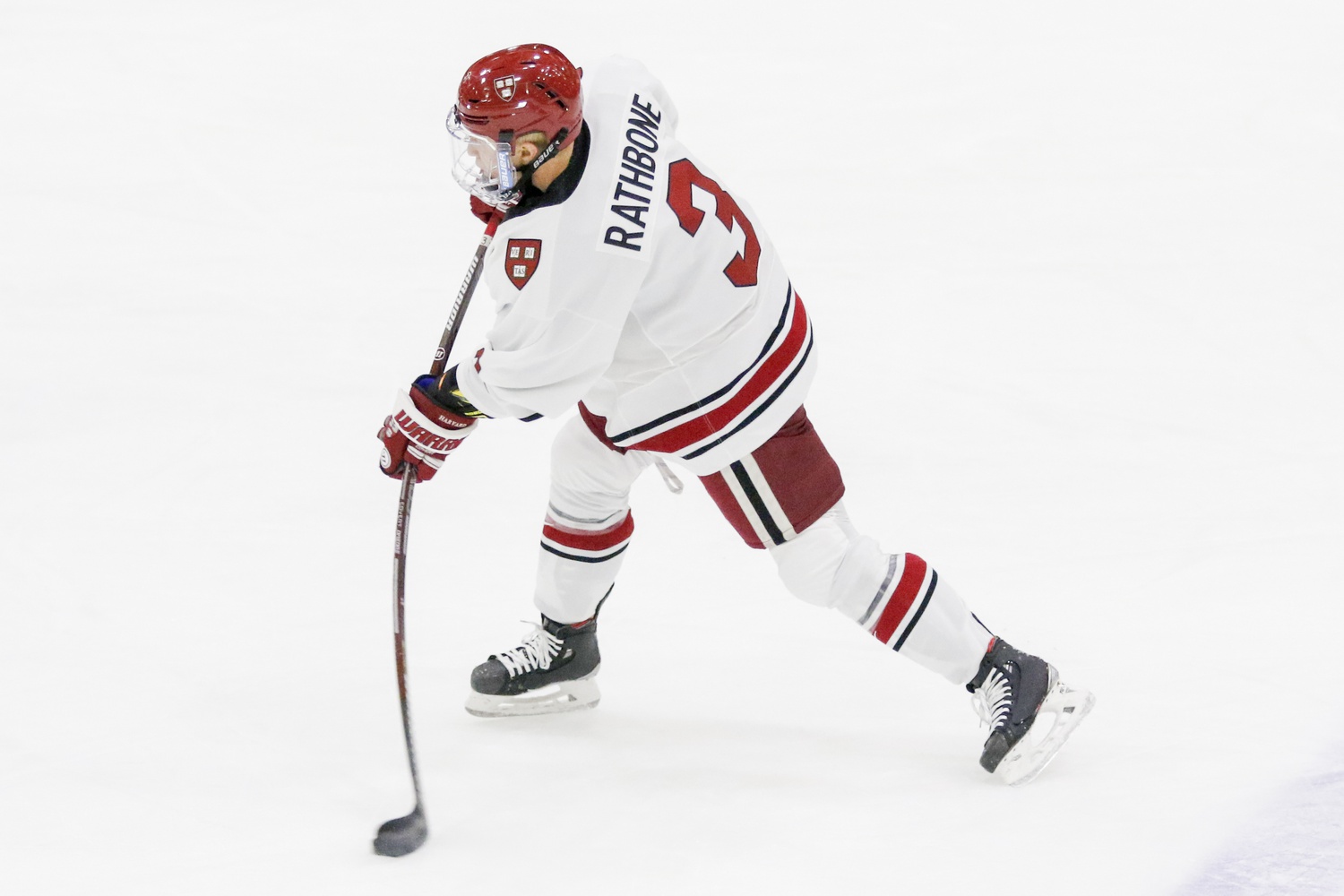 The Crimson's young defensive corps is led by sophomore Jack Rathbone and junior Reilly Walsh, both offensive-minded blue-liners who are also key pieces of the power play. By Timothy R. O'Meara

Princeton, much like the Crimson, entered this season knowing it would have to make up for the key pieces it lost in the offseason. Forward Ryan Kuffner and defenseman and captain Josh Teves have both graduated, while forward Max Véronneau chose to sign a professional contract after his junior year. But the Tigers may have shut down doubters in their opening weekend trip to then-no. 16 St. Cloud State, winning once and then skating to a tie to knock the Huskies out of the national rankings.

“Certainly they lost a lot of guys that were key players for them last year,” coach Donato said. “But that...isn’t that much different than a lot of other teams. I’m sure they are playing with a chip on their shoulder and something to prove.”

This feat was accomplished thanks to the 10 goals Princeton put up in those two games, three of which came on the man advantage. Forwards like senior Jackson Cressey (2–4—8) and sophomore Corey Andonovski (4–1—8) lead the way for the Tigers; Andonovski is second in league-wide goal-scoring while having played six fewer games than the tally leader. The second-year was instrumental to the tie result against St. Cloud State, netting a hat trick that included two power play goals, one of which was the final, game-tying score. Though two games against the same team isn’t the best sample size, Princeton’s man-up squad is clicking at 33.3 percent.

“In terms of the penalty kill...at the end of the day defense comes down to hard work,” sophomore forward Jack Drury said. “So I think starting with our leadership, with Krusko and kind of trickling down, we just need everyone to be working hard in the d-zone.”

Splitting starts last weekend were junior Ryan Ferland (3 GA, .912 SV%) and freshman Aidan Porter (5 GA, .833 SV%). Ferland has been the Tigers’ go-to net-minder for his college career, and propelled the team to an ECAC Tournament championship his freshman year. One weakness that Harvard can look to exploit is the fact that Princeton conceded nearly as many goals as it scored last weekend. On the other hand, the Crimson can’t necessarily count on putting up a seven-spot every night either.

“We’re focused on Friday night,” coach Donato said. “...It’s very difficult to have a great home weekend if you can’t win the first one, so we expect a good, confident Princeton team, and we know we’re going to have to elevate our game.”

Come Saturday, Quinnipiac arrives at Bright-Landry as the team to beat, though the Bobcats lost some steam after last weekend’s sweep at the hands of Arizona State. The team has had its share of offseason losses primarily on the blue line, in captain and Hobey Baker finalist Chase Priskie, and Brandon Fortunato. But Quinnipiac has come into this season swinging, having been ranked since the start of NCAA play. 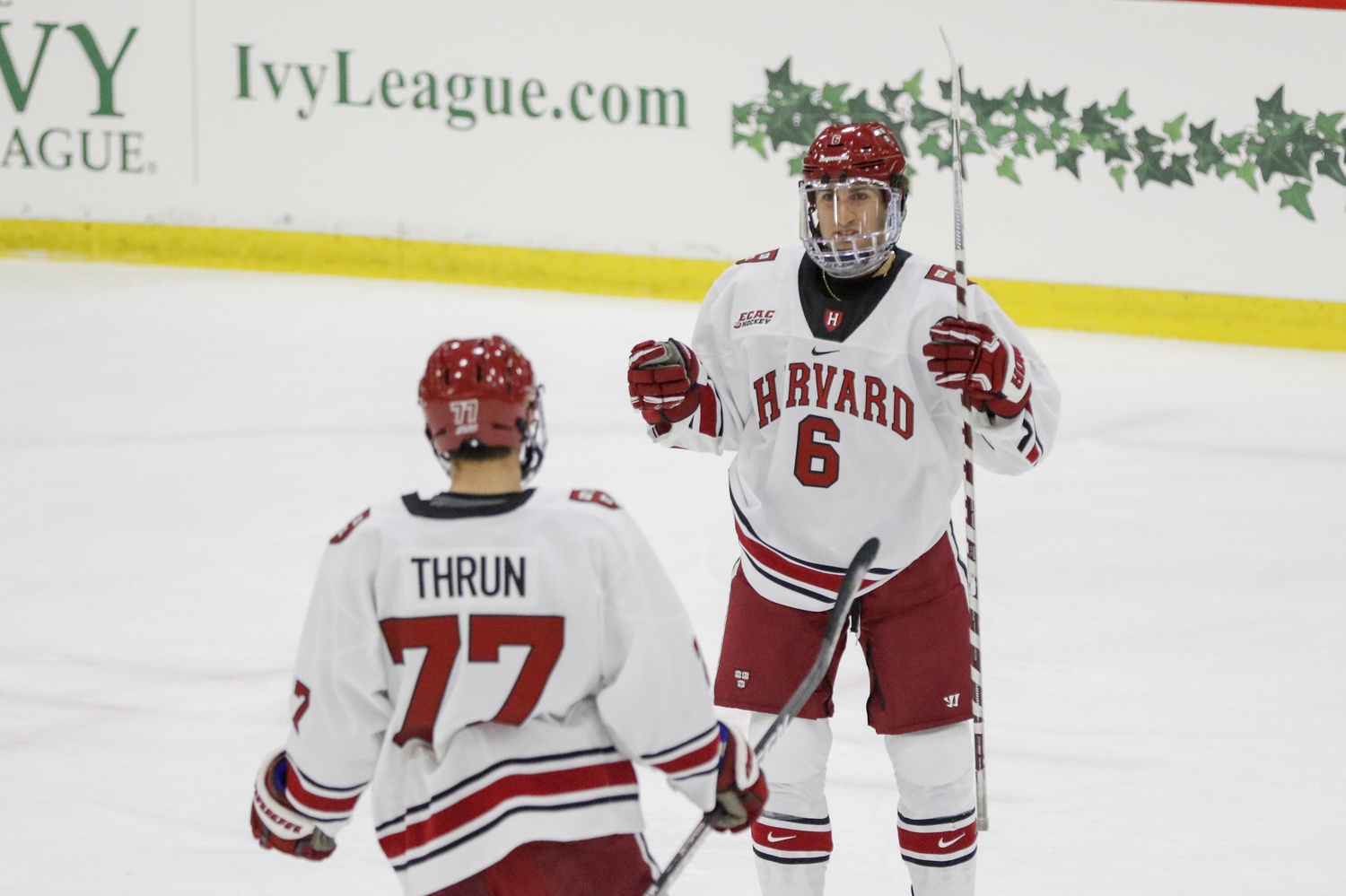 Though the Crimson was held scoreless on the man advantage on Friday, it did find the back of the net immediately after a power play ended. By Timothy R. O'Meara

The Bobcats' player to watch will be junior forward Odeen Tufto, who led his team in points last season (15–27—42) and currently leads the ECAC in assists (9). Tufto has been held goalless so far, but it is only a matter of time before a player of his caliber finds the back of the net.

Other talented weapons in Quinnipiac’s arsenal are sophomore forwards Wyatt Bongiovanni (4–2—6) and Peter DiLiberatore (1–5—6), along with sophomore defenseman Ethan de Jong (3–2—5). But the Bobcats have goal-scorers across its roster that Harvard will have to be wary of.

“They have our attention, that’s for sure,” coach Donato said. “We’ll have to be really good, especially against a team that’s had some games and kind of worked out some things to sharpen their game… We’re going to have to get there a lot quicker in order to have success.”

Junior Keith Petruzzelli will probably be the masked man the Crimson must best, having started most games last season and all but one contests this year. The goaltender’s numbers (2.73 GAA, .899 SV%) might not be the most impressive, but Petruzzelli can certainly take control of a game. His save percentage is also skewed by the fact that Quinnipiac tends to suppress shots, possessing a SOG margin per game of +4.14, good for second in the ECAC.

The Bobcats’ soft spot, however, is in special teams. Not only do they possess a low man-advantage conversion rate (11.1%), they also allow opponents to convert at a decent clip of 18.5 percent. If Harvard can get its own power play going this weekend, it can pose an even greater challenge to the visitors from Hamden, Conn.

The Crimson plans to take things one game at a time instead of getting carried away by the big picture. However, with four crucial points at stake, the team has a lot to play for this weekend, and fans can look forward to seeing how the young, speedy squad might rise to the occasion.

“I think we’re excited to get into back-to-back games, finally,” coach Donato said. “But for us, there’s a lot to prove, and it should be a good test for us.”