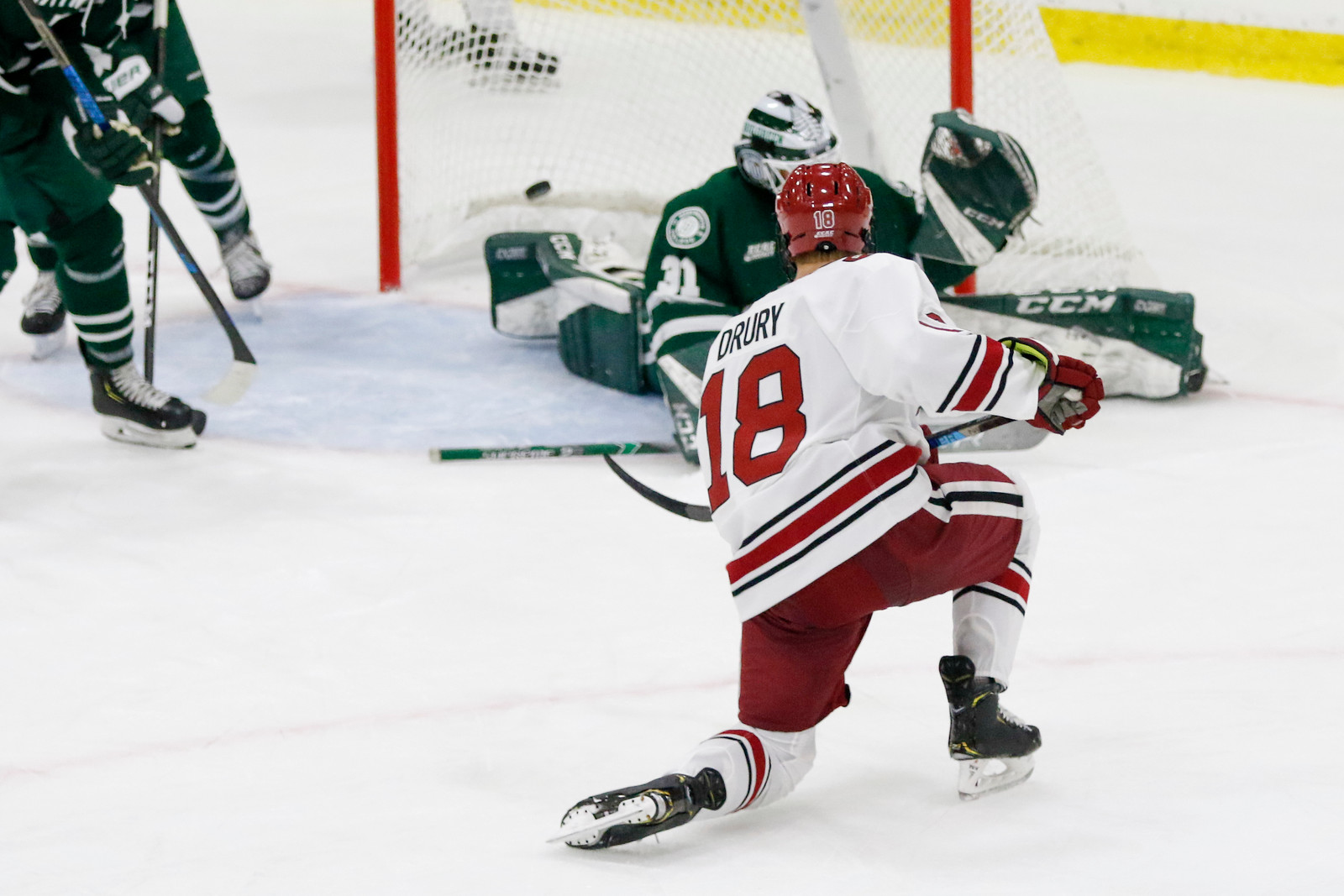 Opening its season at home, the No. 19 Harvard men’s hockey team faced travel partner and frequent foe Dartmouth. Matchups between the two squads tend to be explosive and high-scoring, much to audiences’ delight and coaches’ chagrin. With the Crimson’s especially young and fast roster this year that run-and-gun tendency seemed even more likely — but though the game was a back-and-forth one, the final score gives it a lopsided look.

Harvard’s (1-0-0, 1-0-0 ECAC) bursts of scoring propelled it past the Big Green (0-1-0, 0-1-0) by a score of 7-3. Those seven tallies included three from freshmen in their first collegiate contests and two from sophomore defenseman Jack Rathbone. Sophomore forward Casey Dornbach, last year’s ECAC Rookie of the Year, pocketed three assists on the night, as did junior centerman Jack Badini. 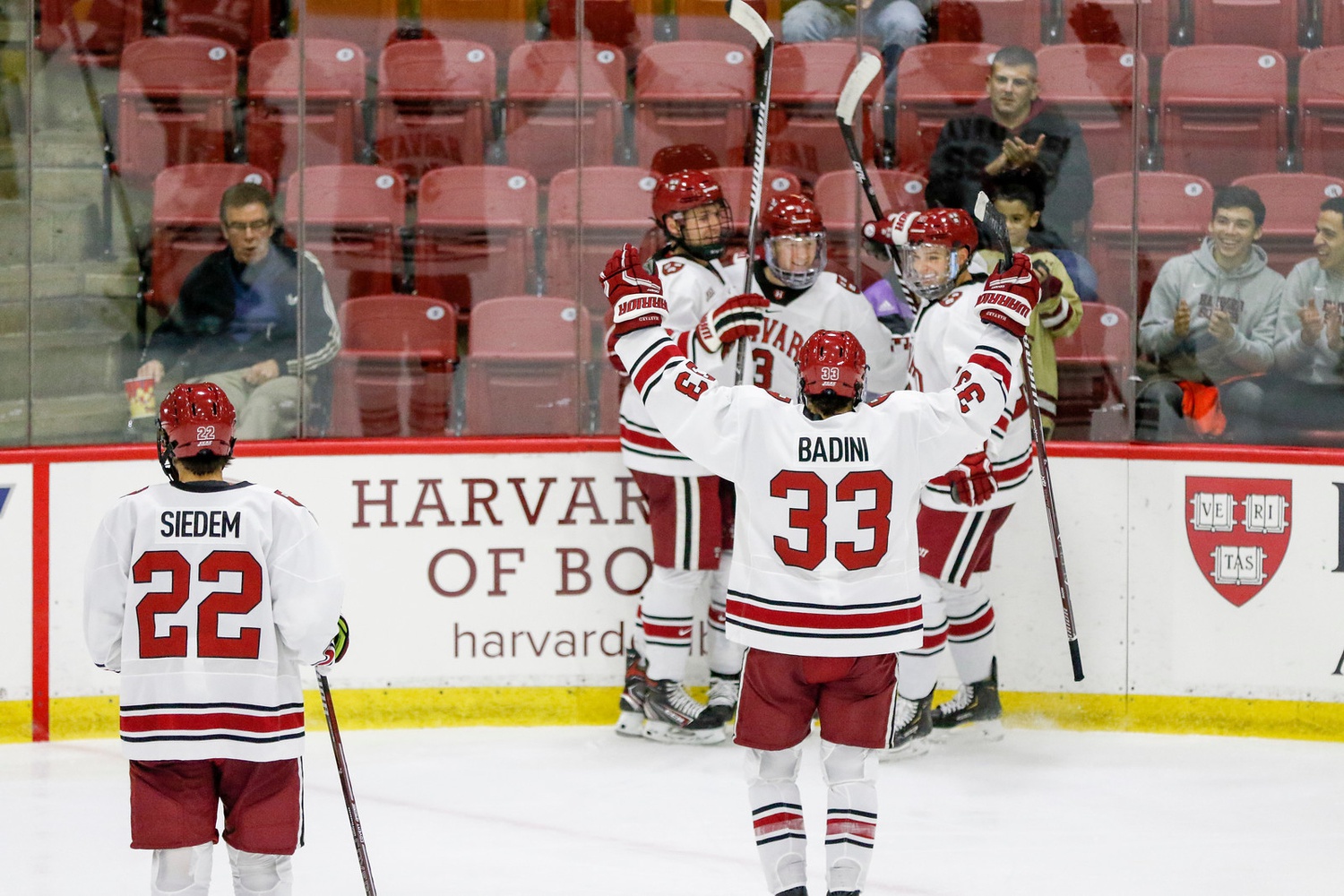 “Everyone’s excited to finally start to get going here,” sophomore defenseman Jack Rathbone said. “It’s been a while watching some other college teams play the last few weekends, so [it was] good to get out there, good to get the first one under our belt, especially for all the young guys too.”

Though the Crimson jumped out to an early lead, doubling it later in the first period, the bulk of the contest’s action — six goals, in fact — came in the middle frame. Dartmouth came in flying after the first intermission, taking only 1:36 to find the back of the net courtesy of senior forward Daniel Warpecha. The visitors repeated the feat again 20 seconds later and a third time less than five minutes after that, as junior forward Quin Foreman slotted a rebound home after a Big Green 2-on-1. Momentum, arguably, had been on Dartmouth’s side anyway; the Big Green put up 18 shots to Harvard’s 12 in the first period. But now the chances were going in. 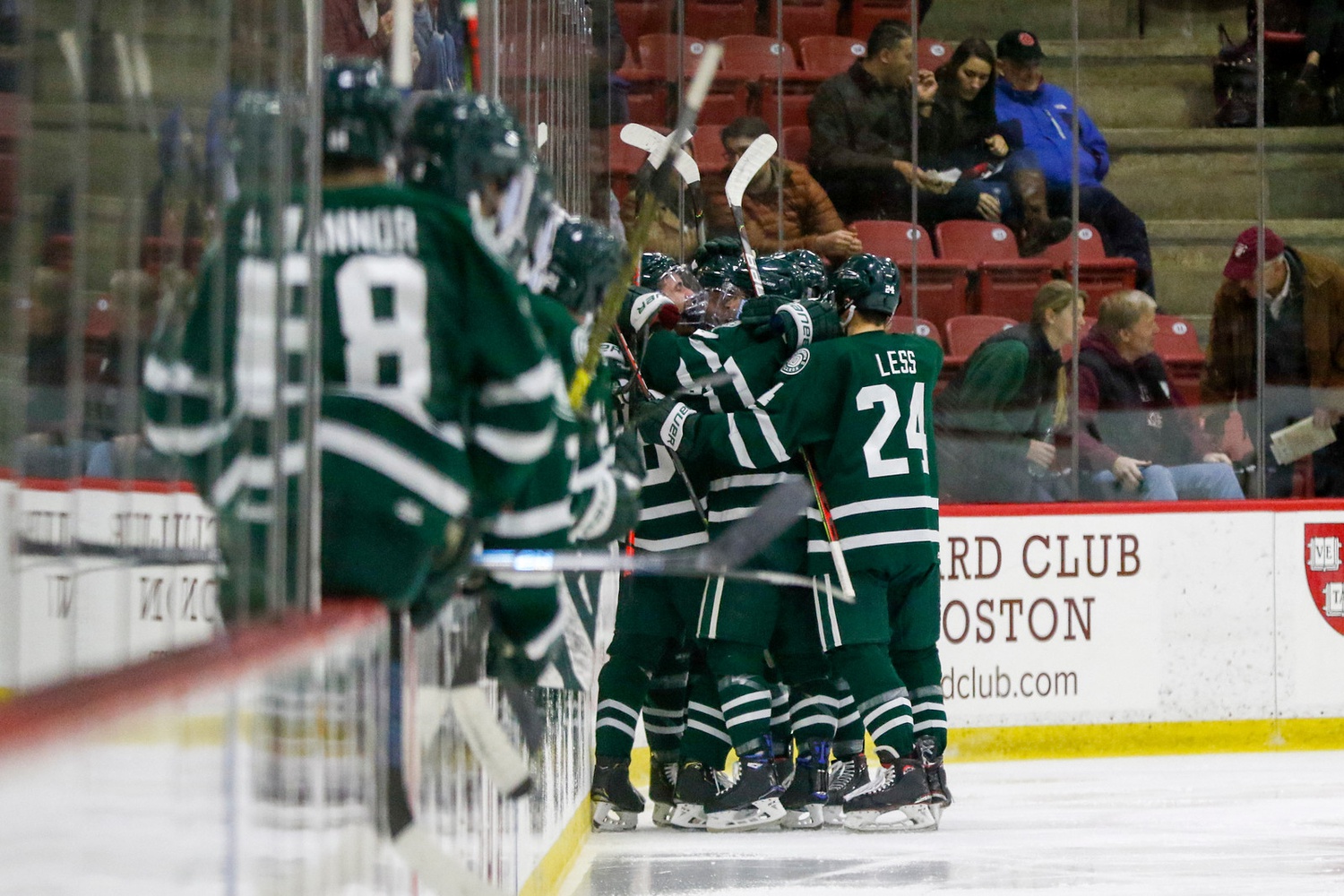 Despite the loss, Dartmouth controlled parts of the contest. In the first eight minutes of the middle stanza, the Big Green found twine three times. By Timothy R. O'Meara

“Their first line [of sophomore Drew O’Connor, senior Will Graber, and Foreman] is heavy, and can make it tough on you, and can make it a physical mismatch,” head coach Ted Donato ’91 said.

Whether or not the sequence of events had to do with the Crimson’s inexperience or size — Dartmouth iced one freshman as opposed to the hosts’ four — the test of resilience had arrived early. Now down 3-2, could Harvard withstand a bigger opponent long enough to counter? 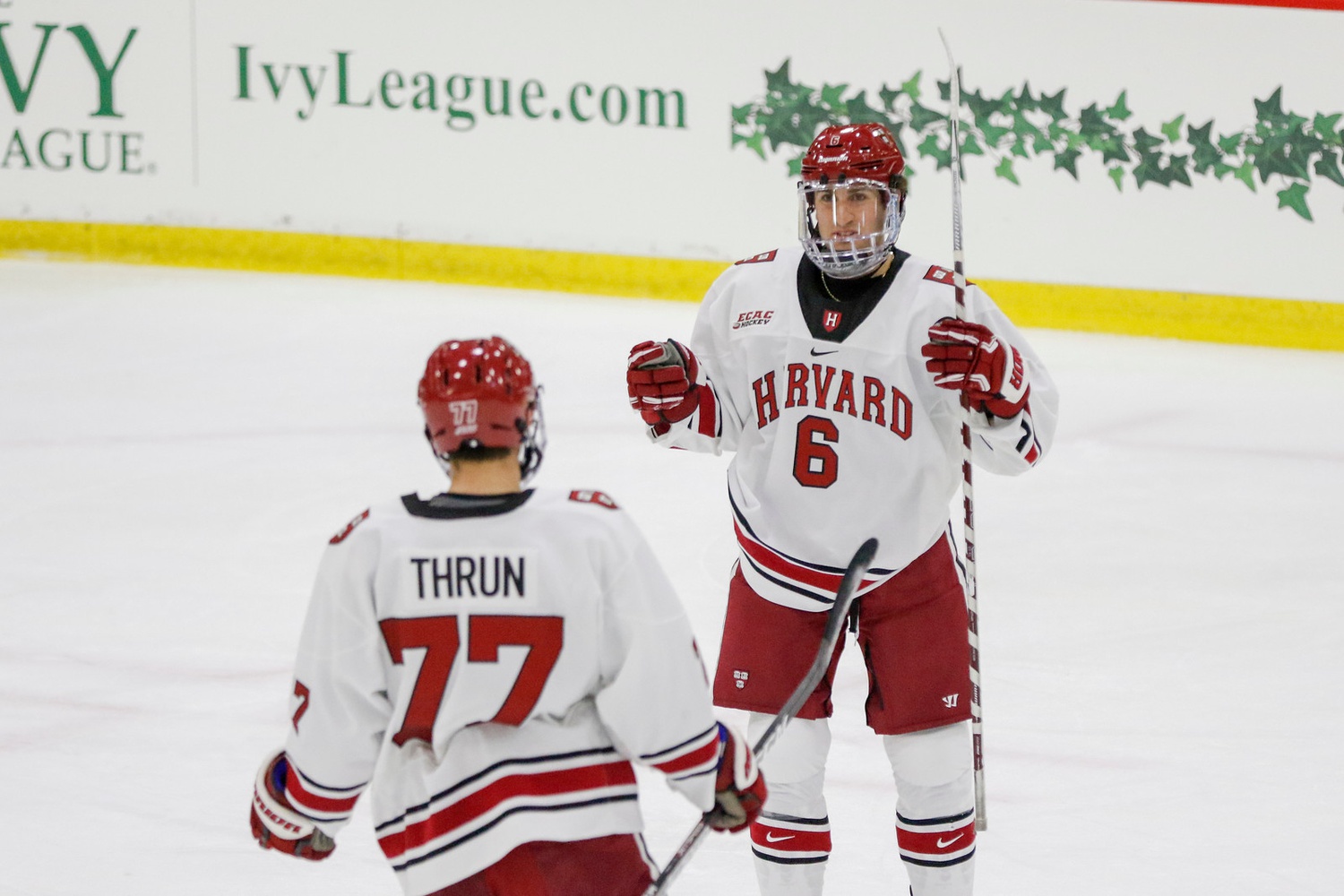 In the first period, junior forward Colton Kerfoot potted a cross-ice feed from rookie blue-liner Henry Thrun. The tally contributed to Thrun's impressive night, in which he notched his first NCAA point and, later, goal. By Timothy R. O'Meara

It didn’t take long for that question to be answered. Halfway through the game, rookie forward Nick Abruzzese took the puck at the left circle on a pass behind the net and found his classmate, defenseman Henry Thrun, in the slot. Thrun shot the puck off the pipe and in; sophomore goaltender Justin Ferguson was screened effectively on the play. That wasn’t Thrun’s first point of the night, as he had already assisted on Rathbone’s ice-breaking goal in the first period — it was Abruzzese’s first, however.

“It looked like it was a good night to be a freshman,” coach Donato joked. “I thought Thrun was excellent, in the d-zone, offensively, on the power play. I just thought he looked very comfortable for a guy playing his first collegiate game.”

Having tied the game, the Crimson kept going, tacking on a tie-breaking goal less than a minute later. The goal was Rathbone’s second, a top-corner snipe from the right faceoff dot. Still more was to come. 12 minutes into the middle period, a timely Thrun keep-in was carried in behind the goal line by Abruzzese, who then found sophomore forward Jack Drury for a one-timer that beat Ferguson. Drury’s tally was the dagger, though both Abruzzese and rookie John Farinacci added to the goal total in the third period.

Harvard’s offensive performance was backed by steady goal-tending from senior Cameron Gornet (3 GAA, .936 SV%). While Gornet has never started the lion’s share of games in his career, he proved himself in select contests last season. That calm kept out the Big Green in even high-grade scoring chances throughout the game. 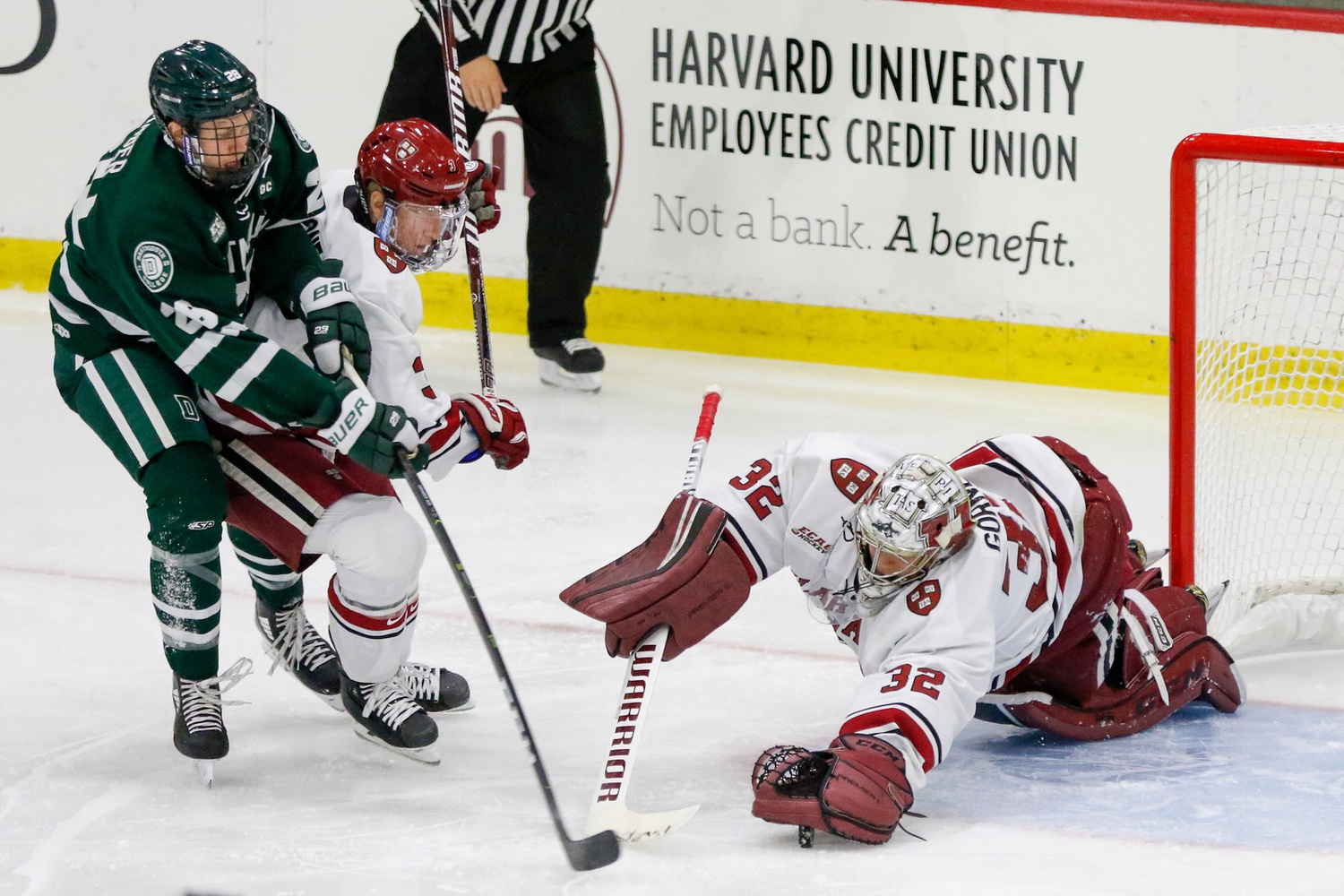 Senior Cameron Gornet tended the Harvard cage on Friday night and will look to lock down the starting role for the entirety of the season moving forward. By Timothy R. O'Meara

“I was happy to see Cam Gornet kind of settle down,” coach Donato said. “I don’t think a couple of the goals early were him at his best. But I was really happy with the way he responded and dug in, I thought he was great in the third period.”

The non-factor that was special teams on Friday was unusual for a contest between these two teams. The Crimson did not manage to score on any of its three man-advantage opportunities, though its 2-0 goal, scored by senior forward Colton Kerfoot, came right after a power play expired. Still, there will be plenty of time to tune up 5-on-4 play as the season goes ahead — and as Thrun (1–1—2), Abruzzese (1–2—3), and Farinacci (1–1—2) demonstrated, it is clear the team can get a great deal of mileage out of its skilled rookie class.

“It was really exciting,” Thrun said. “A lot of good plays were made out there. Thankfully [Abruzzese] had a great pass on my goal. I mean, you can’t do it without a team effort.”

Early chemistry will come in handy next week when Harvard plays host to Princeton and No. 9 Quinnipiac. The Bobcats, not beholden to the late-start rules of the Ivy League, have already put up an impressive non-conference record (4-1-0, 0-0-0 ECAC); while the Tigers are the easier challenge of the weekend, the Crimson would be loath to take any two points for granted.