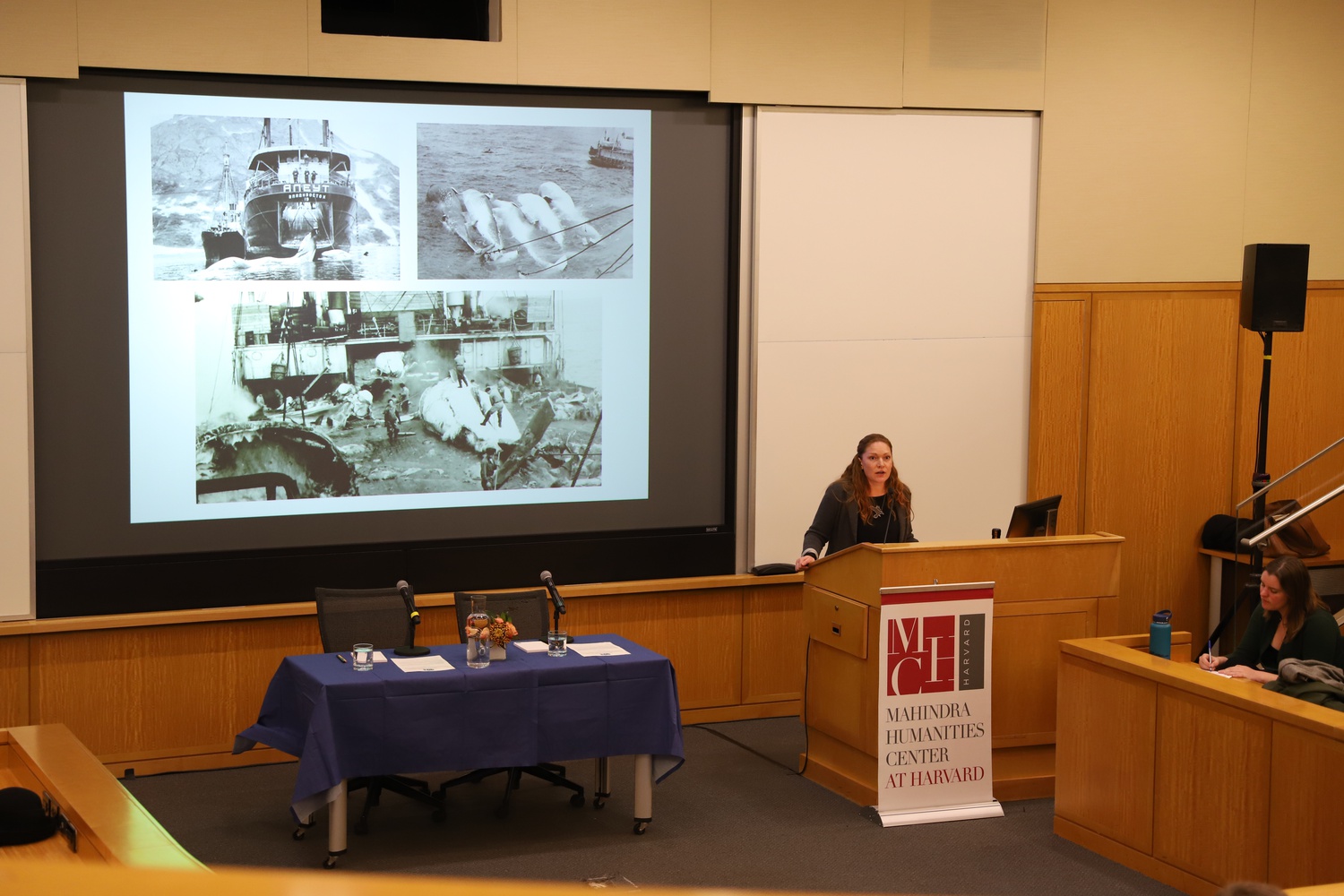 Bathsheba Demuth, Assistant Professor of History and Environment and Society at Brown University, spoke Wednesday evening about the ethics of human interaction with whales and the consequences the actions humans take. By Ryan N. Gajarawala
By Taylor C. Peterman, Crimson Staff Writer

Graduate students, professors, and whale enthusiasts gathered to hear Brown University Professor Bathsheba Demuth discuss the history and ethics of humanity’s relationship with whales Wednesday at the Center for Government and International Studies.

Demuth, an environmental historian, spoke to a packed audience in the Belfer Room on the history and moral consequences of whaling in capitalist, socialist, and indigenous societies.

“One way of reading the history of humans and whales for the last 2,000 years is a history in which whales have actually intimated the way in which they wish to be consumed,” Demuth said.

“The whales themselves have offered an argument for the kind of relationship that they would prefer: it is a relationship where humans remain dependent on whales, and it’s also a relationship in which there is true and recognized interdependence,” she added.

Demuth, who studies the environmental history of the Russian and North American Arctic, began her presentation with a discussion of the importance of whales in the oceanic ecosystem. She said, for example, that environments with certain types of whales are "more alive" than those without them.

She also compared the relationship between people and whales among different populations, including the Yupik people — an indigenous group in the Arctic region. She said the group has a long, complex relationship with the swimming mammals.

“Within this kind of lush and animate universe, whales were understood as being kind of a particular kind of person with a particular character to their souls,” she said. “They [whales] had their own social world of laws and would leave their country each spring to come past St. Lawrence Island, and perhaps, in doing so, they would consent to be hunted by the people who lived there.”

Demuth also compared the relationship between whales and humans in capitalist society, focusing on the connection between whaling and consumption.

“We must consume something,” she said. “What is left for us to do is figure out not how not to consume, but how to actually consume well.”

The event, entitled “Do Whales Judge Us? Interspecies History and Ethics,” drew Harvard affiliates from across the University.

Reverend Cody J. Sanders — an American Baptist Chaplain at Harvard — said he was interested in the event because of its focus on human relationships.

“I was drawn mostly by the topic in relationship to kind of my own emerging sense of what it means to have a relationship kind of beyond human relationships to the more-than-human world,” Sanders said.

Chloé-Rose Colombero ’20, who also attended Demuth’s talk, said she wished the event had been longer.

“It would have been so cool to hear her talk more,” Colombero said. “I think that my biggest takeaways are that this is really energizing work that I hope more people can do because...we can’t exist in a way we can’t imagine.”