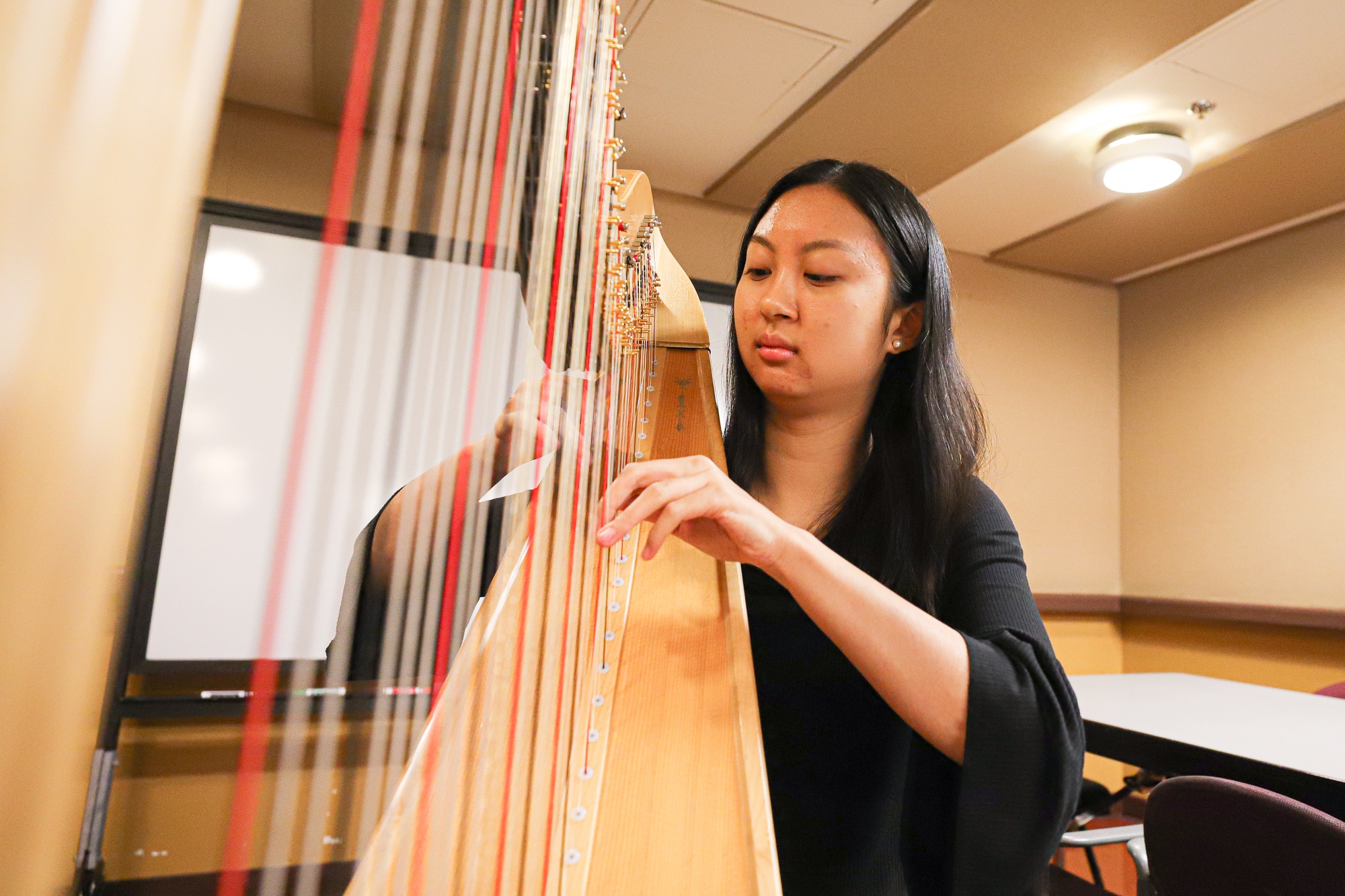 Jessica L. Ding ’20 and I are squashed together in the Memorial Hall elevator with a small bench, a music stand, and a harp. When the doors open, a woman is waiting on the floor landing, watching with amusement as we shimmy our way out.

“You should try the flute,” she says to Ding, who deftly wheels the instrument over the elevator grate. Ding laughs politely, later admitting that the flute comment is “not unique.”

Ding is one of three Harvard harpists currently enrolled in the dual-degree program between Harvard and the New England Conservatory. Next year she’ll receive her Masters of Music, but for now she’s finishing up her Anthropology concentration — all while completing pre-med coursework.

“I’m torn between different paths,” she says. “Everything that I try winds up becoming something that I really like.”

It began with the harp, which she took up at the age of 10 after growing tired of the piano, which she played for six years. At the time, her elementary school was implementing an orchestra program, so Ding went on YouTube to survey the different orchestral instruments. “The one instrument that was there and that wasn’t offered by my school was the harp,” she says. Naturally, that’s the one she chose. “It just kind of stood out.”

Ding’s parents drove her to lessons two and a half hours away from her small hometown of State College, Penn., and once they could see that their daughter was committed to practicing, they purchased her an instrument of her own.

In her senior year of high school, while Ding was applying to the Harvard/NEC program, she also had the opportunity to enroll in a class at Penn State University. Perusing the various courses, Ding ultimately chose — as with the harp — the unfamiliar option: anthropology. By the time she got to Harvard, she already knew she wanted to earn her degree in the field.

At that point, medicine “wasn’t a path I was considering at all,” she says. “I had this idea of medicine as super formulaic: You come in, you diagnose someone, and then you give them medication that’s already been decided as a course of treatment.”

Meeting anthropology professors with medical degrees in her freshman year, however, swayed her opinions. “Anthropology really emphasizes how individual everybody is,” she says. The medical anthropologists she met emphasized that people differ in illness not simply from a biological perspective, but also in the ways they experience illness itself. 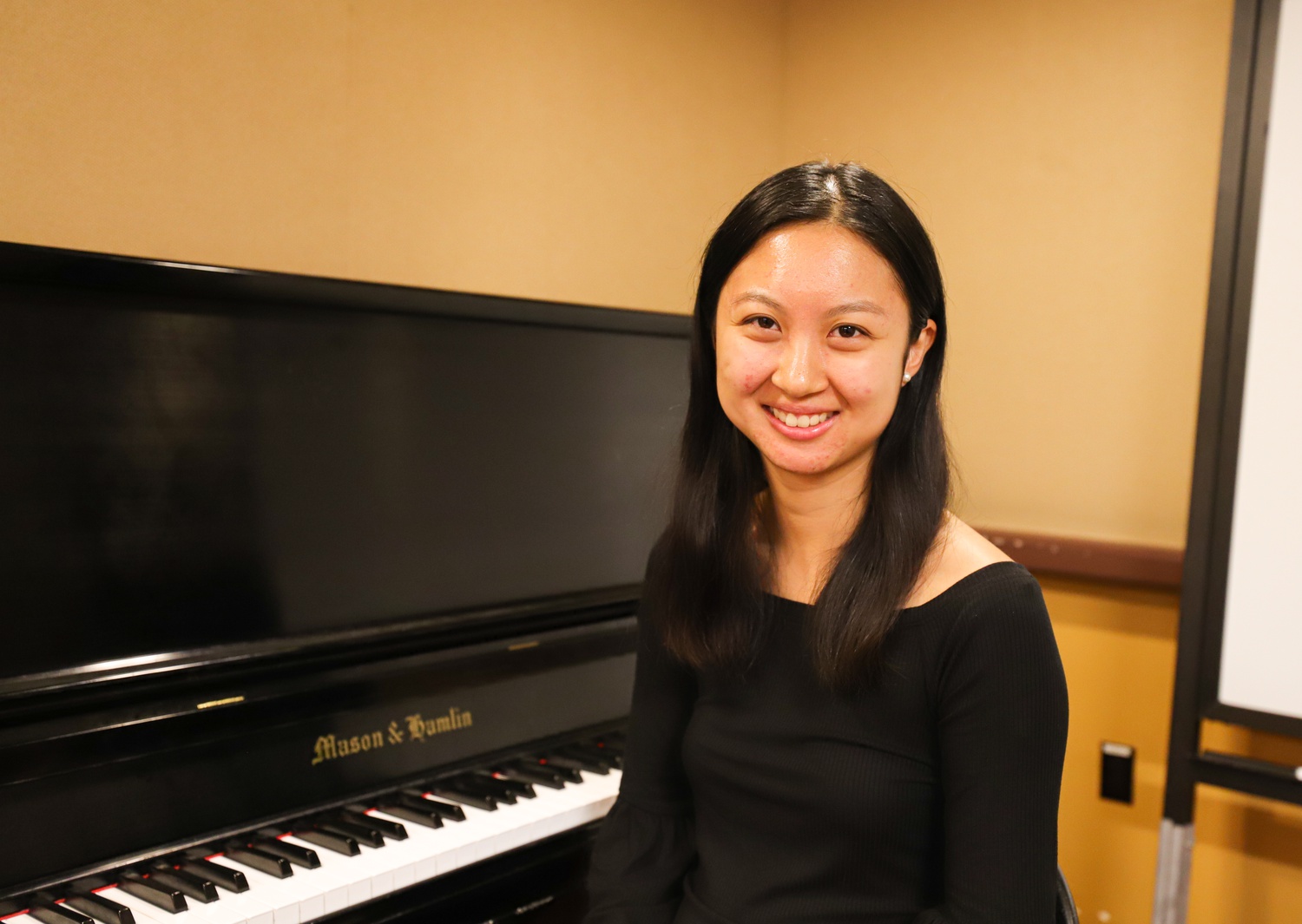 “That made me a lot more open-minded about what’s out there,” Ding says.

Ding has faith that her winding paths will ultimately coalesce, each somehow informing the other. This semester, for example, she’s taking what’s been her “favorite class ever”: Mind, Brain, and Behavior 980P, “The Role of Music in Health and Education.” She’s learned about doctors who integrate different art forms into their careers and new clinical studies that suggest music can help stroke or Alzheimer’s patients.

“I’m just going to go with everything I find interesting right now, and I think it’s going to work itself out,” Ding says.

That mindset has drawn her to numerous other activities: She joined Kirkland’s intramural crew team and served as director of the Harvard Program for International Education, teaching classes on international affairs to local high school students. Now she’s a co-head tutor, writing curricula for the program on topics like international elections.

When we finally wheel the harp to a suitably private practice spot in the basement of Memorial Hall, Ding gives me a brief but informative crash course on the instrument, which I realize I haven’t ever examined up close. She shows me how the different pedals control whether a note is sharp, flat, or natural; how the C strings are red while the Fs are black; how to play a simple scale, which I tentatively pluck out to my own delight. Then she sits down to play.

I try to remind myself that the notes flooding the air, light and soothing as drizzling rain, are each the product of real labor: intense concentration, rapid coordination, sustained strength. The harp rests on Ding’s right shoulder, and I ask if it’s possible for it to fall.

But it hasn’t happened yet, and Ding, in spite of others’ clever comments, has not thought of switching to the flute. “No one ever says that to a pianist,” she grumbles.