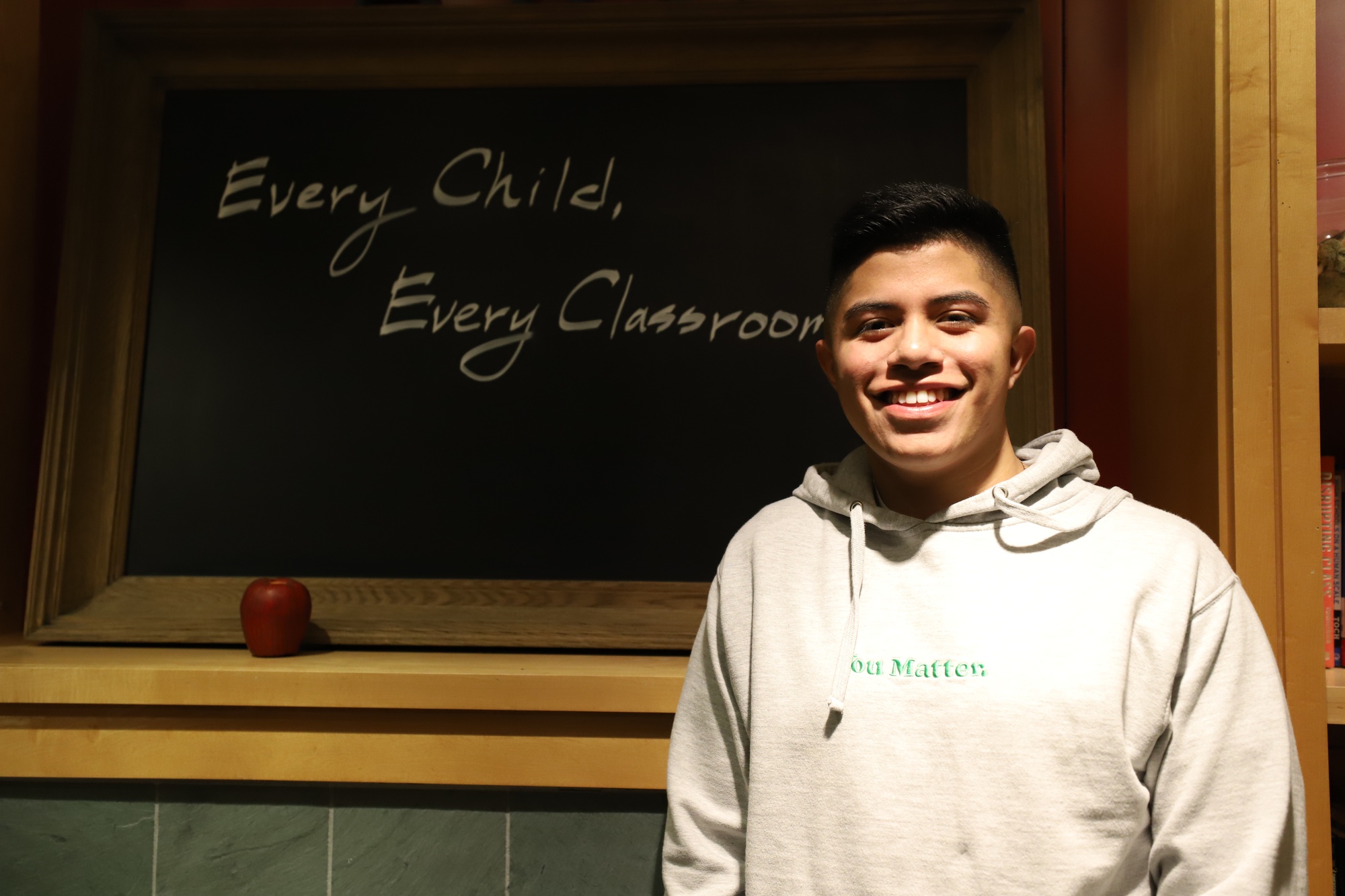 I don’t know how I expected my interview with Andrew Pérez ’20 to start, but I definitely didn’t expect him to offer to shave his head on camera for the video accompanying our “Fifteen Most Interesting Seniors” feature. He assures me that does this all the time — his hair grows back quickly: Every time he needs a fresh start, it’s the first thing to go.

We’re meeting in the back of the Gutman Library, surrounded by books about education and a chalkboard display propped up against the wall behind two red foam apples. Pérez tells me that he wants to be a teacher, hence why he chose to meet at a Graduate School of Education library. His first choice location was the Hip-Hop Archive — unfortunately closed on Friday afternoons.

Originally from Pico Rivera, California, Pérez is a senior in Mather concentrating in Sociology. He has served as the president of the First Generation Students Union, later called Primus; he is one of the founders of the First Year Retreat and Experience (FYRE); and he has been involved with Latinx cultural organizations and the Ethnic Studies Coalition. He began community building work in high school, where he created a bridge program that helped first-generation and low-income students transition from middle school to high school.

“It was basically the same thing that FYRE is,” Pérez says. When FYRE got approved for funding in 2017 after seven years on the back burner, Pérez was president of the First Generation Students Union — so he and then-vice president Charity E. Barros ’18 got to work. Today, FYRE is a full-blown and institutionalized pre-orientation program open to over 100 first-years, dedicated especially to helping first-generation and low-income students make the transiton to Harvard.

Outside of his community-building work, Pérez is involved with music on campus. He works at the Hip-Hop Archive and is an organizer for No Label, a group made up of students across the Northeast situated at “the intersection of business and music,” as he describes it. The group is dedicated to creating brand partnerships between institutions and artists. He has helped organize events on campus with artists like Travis Scott, 6lack, and Bad Bunny. Over the summer, he interned at Interscope Records and left with a few highlights. 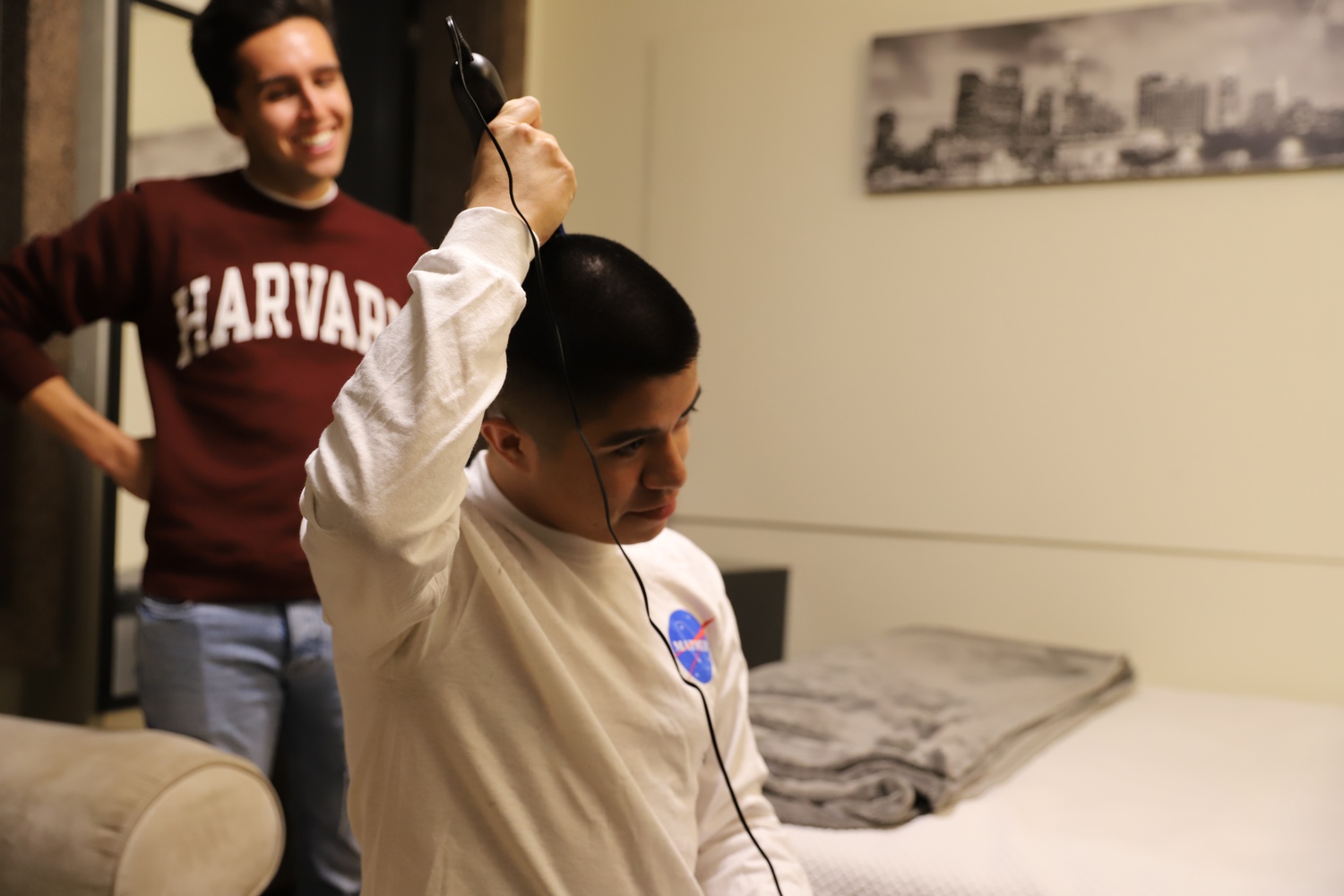 “I got Selena Gomez tea,” he says. “The child in me was like, ‘Wizards of Waverly Place!’ You were my crush. Here is your green tea venti with whipped cream.’” I forgot what exactly the order was. I know it was a green tea… and she added something on it that I was like, ‘That doesn’t sound right.’ But I was like, ‘Hey, whatever the love of my life wants.’”

Pérez is currently writing his senior thesis on the culture within the U.S. Border Patrol, trying to determine how Border Patrol agents view their job: protecting their homeland, or protecting immigrants by apprehending them on life-threatening journeys through the desert. When I ask him what he wants to do after graduation, he laughs. “Asking a senior that question is disrespectful, he says.”

He does have an answer, though: After graduation, he is going to be a consultant for a few years, a move he describes as “selling [his] soul.” But after that, he plans to return to his original plan — teaching sixth or seventh grade.

“I want to have some pretty cool stories before I go back,” he says. “I want to be able to be like, ‘Hey, I traveled to this country,’ and really inspire the kids, and so I want to take a moment to collect my bag and travel the world and then go back.”

When I ask him why he wants to be a teacher, he laughs again.

“So, not to shit on Fifteen Most Interesting seniors, right?” he says. “People here are interesting and cool. But there are so many other interesting cool people in the world that just didn’t have the chance to be here for whatever arbitrary reason, right?” Pérez wants to empower students to choose exactly what they want to do with their lives –– whether that means going off to a place like Harvard or staying in their hometowns.

“I would want to teach a community that is more like mine back home. A more first gen, lower income, some students are undocumented, kind of room, because I think those are students who are so creative and have such a story behind them, but are often not said and spoken about,” he continues.

Our conversation winds down as he tells me about a time he rented a car with friends for spring break in Canada, only to have it towed in the parking lot of an Allston restaurant. We leave Gutman,walk towards the river, and part ways soon after. As he crosses the street, he calls over his shoulder, “Later homie.”