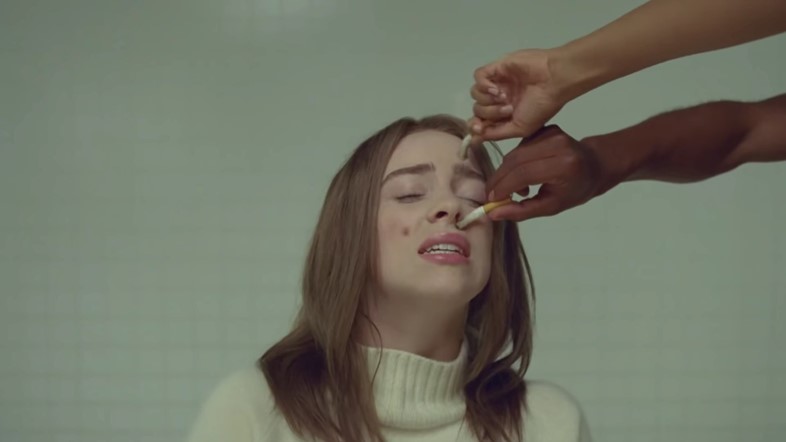 With a chart-topping album and an appearance at Coachella, 17-year-old Billie Eilish is emerging as the child star of our generation. And she’s doing it her own way, with whispery vocals, hyper-processed sounds, and a not-quite-goth aesthetic of neon hair dye and dark, baggy clothing. But Billie Eilish is one thing few would expect of someone with her early success and edgy style: a substance-free teen.

On “Xanny,” a track from her debut album “When We All Fall Asleep, Where Do We Go?” Eilish explains why she abstains from alcohol, weed, and Xanax (the titular drug). Of drug users, she says she’s “Better off without them / They're nothing but unstable / Bring ashtrays to the table / And that's about the only thing they share.” As the dramatic yet minimal ballad floats on, Eilish’s friends get stoned, but she stays sober, “in their secondhand smoke / Still just drinking canned coke.”

On Dec. 5, Eilish debuted a music video for “Xanny.” It’s her ninth music video, and the first she directed herself. In the video, Eilish looks strangely “normal”: She wears an understated cream sweater and her hair is a natural brown. Sitting cross-legged on a white bench in a white tiled room, she looks much like an average person on the street and little like her typical stage persona. The video progresses in a series of small, shocking movements. The camera zooms in and out on Eilish’s face; she dances robotically, following the music mostly with her neck, head, and glazed eyes; and at the song’s climactic moments, disembodied hands enter the frame and extinguish cigarettes on her face.

Eilish isn’t one for minimalism. That’s why her decision to bring natural hair, an understated outfit, and an almost all-white palette to her first self-directed music video is so interesting. In many ways, Eilish seems to be inhabiting the character of the addict she describes in the “Xanny” video: Her eyes are glazed over and she’s apathetic, barely reacting as cigarette burns cover her face. This choice overturns many pop music narratives around drugs and alcohol. For Eilish, getting drunk and high isn’t sexy; it’s dull and repetitive, colorless and numbing. Her cool self is her sober self.

There’s an obvious explanation for Eilish’s attitude: She’s still too young to legally drink or promote drug use without raising eyebrows. But age has been no obstacle to other hard-partying child stars, and Eilish’s conviction seems legitimate, coming out not only in her recordings but also in her interviews. So maybe Eilish’s substance-free attitude reflects something more meaningful. Eilish has long complicated the norms of female celebrity, refusing to be sexualized to sell records. Paradoxically, in being boring, this music video may represent an attempt by Eilish to twist pop culture’s norms around drug use—another attempt to do fame differently.