A three-goal third period powered the Crimson to victory 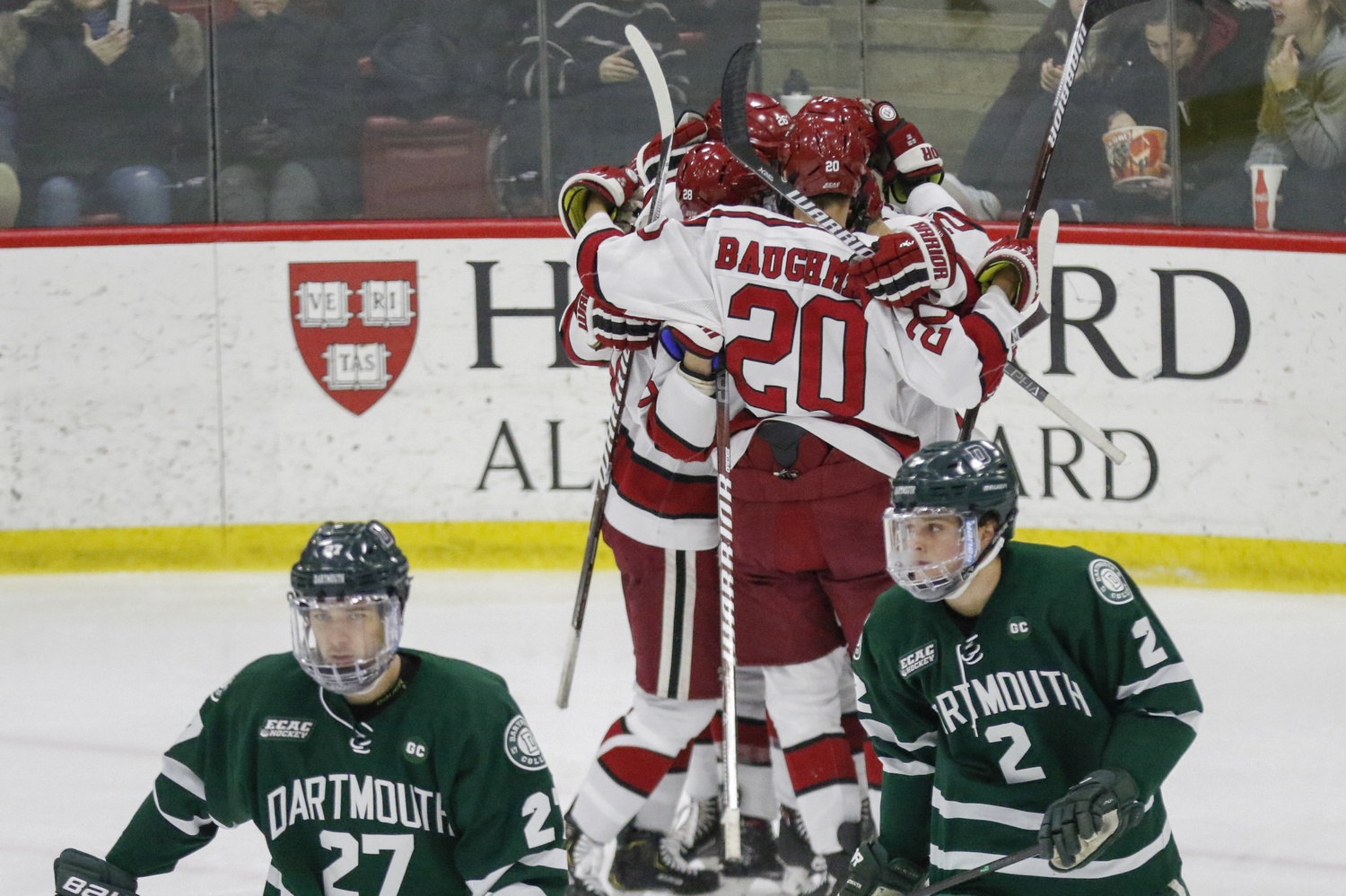 With the win on Friday, the Crimson brings the season series against Dartmouth to a 1-1 tie. Unless the teams meet again in the ECAC playoffs, that result will stand for this year. By Timothy R. O'Meara
By Stuti R. Telidevara, Crimson Staff Writer

Before taking the ice for its first Beanpot matchup on Monday, the Harvard men’s hockey team had to contend with Ivy foe Dartmouth. The Big Green visited the Bright-Landry Hockey Center in the hopes of derailing the Crimson’s first hot streak of the season — perhaps the hosts would make the mistake of overlooking Dartmouth in light of the upcoming big game.

“I think we owed those guys a game, after the first game of the year,” said senior goaltender Michael Lackey, referring to a frantic opening night at Hanover, N.H. that ended in a 7-6 Big Green overtime win. “...Everyone’s bought in to the team, and we’re confident going into every game.”

Shots on goal were even more lopsided in the first period, when the Big Green put 14 pucks on net to the Crimson’s three. Dartmouth was faster out the gate than the hosts and nearly broke the ice around the five-minute mark, though that attempt was waved off and reviewed to confirm no goal.

The Big Green’s swarming offense forced Lackey to scramble in the paint on several occasions. In the end, it was an unlikely shot that beat him: a floater from senior defenseman Connor Yau that snuck between his pads.

“I thought [Lackey] looked a little bit antsy early on,” head coach Ted Donato said. “[But] it’s not a question of whether you have a bad play or a bad goal, it’s how you respond to it. And he made some big saves to keep it at one.”

The turning point for the Crimson came early on in the middle frame. After outlasting a penalty that carried over from the first period, Harvard mounted the pressure on the Big Green. Rookie forward Baker Shore tossed the puck on net from the left circle; though Dartmouth junior net-minder Adrian Clark stopped his attempt, co-captain Lewis Zerter-Gossage was in the perfect position to bat the biscuit into the back of the net. Just four minutes into the second period, the Crimson had evened up the score.

“When we’re struggling, [Zerter-Gossage] gets a big goal to give everybody a shot of adrenaline and kind of settle the game down,” coach Donato said. “I think that’s what you hope to get out of your captains, a big night when we need it.”

Harvard continued to push, but could not capitalize again that period. When the teams left the ice after 40 minutes, the score was still knotted at one. The Crimson had suffered a different kind of blow, though; sophomore forward Henry Bowlby, who returned after missing last Saturday’s game against SLU, was issued a game misconduct for hitting from behind. The team killed off the ensuing five-minute penalty, but was short a man for the rest of the matchup. 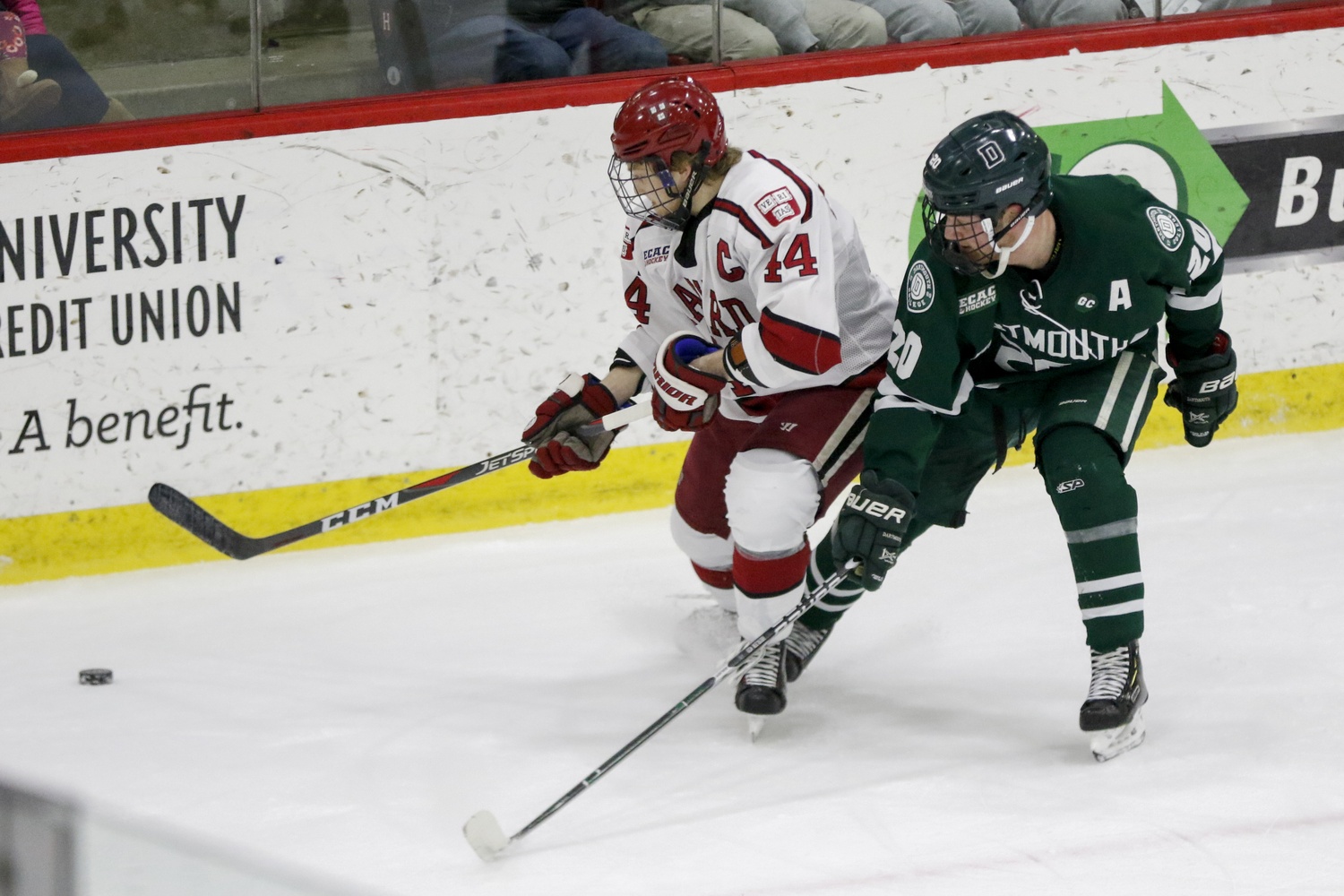 Co-captains Floodstrand and Zerter-Gossage provided the Crimson's crucial goals on Friday. The pair have scored in the same game three times so far this season. By Timothy R. O'Meara

Still, it was with renewed energy that Harvard returned to the ice. Only 2:34 into the final frame, the team found its reward. Senior forward Frédéric Grégoire fired a shot into Clark’s glove, which the net-minder struggled to collect. In a scramble around the blue paint, co-captain Michael Floodstrand was able to push the puck past him, earning the Crimson its first lead of the night. From there, sophomore linemate Jack Donato joined in on the scoring, corralling a loose puck near the slot to shoot it home.

“On different nights you need different guys to step up,” coach Donato said. “I thought that the Floodstrand-Donato-Grégoire line was really good. It’s been a couple games in a row now where they’ve not only showed up on the scoresheet, but they held onto pucks and really helped up get the win tonight.”

An empty-net tally from Zerter-Gossage sealed the deal for the home team. The forward’s clutch two-goal performance adds to his team-best 12 goals. Harvard’s other two notches both came from the fourth line of Floodstrand (1 G, 1 A), Donato (1 G), and Grégoire (2 A). The co-captains made the difference on Friday, scoring the tying and game-winning goals.

“We’re really just trying to get the team turned around,” Zerter-Gossage said. “I think it’s on the older guys especially to really lead the charge. Today we really built well off that.” 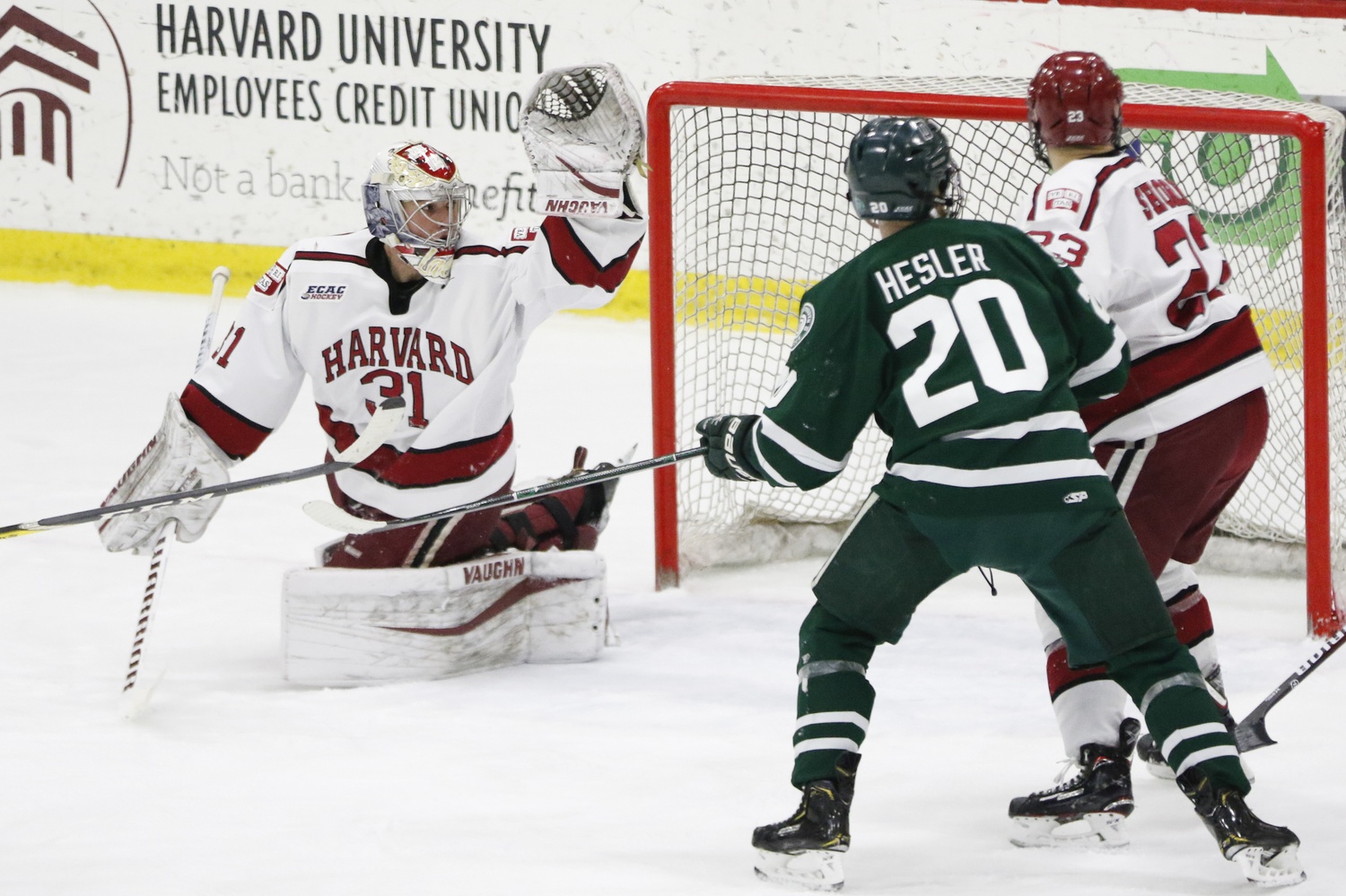 Lackey turned away 34 of 35 shots on the night, good for a .971 save percentage, despite giving up a soft goal early on. By Timothy R. O'Meara

After his shaky start, Lackey’s recovery and the Big Green’s high shot volume resulted in a stellar .971 save percentage. The net-minder was especially solid in helping shut down Dartmouth’s power play, which could not convert on its five-minute opportunity.

In fact, special teams played out tonight contrary to the Crimson’s usual style. The nation’s best power play (34.3%) was unable to find twine, despite a 5-on-3 chance, and instead Harvard’s lackluster penalty kill (75%) held sway.

Harvard’s two points boost the team to second place in the ECAC, though it has played two more games than most other squads. Perhaps most important, though, is that the newly-ranked Crimson extended its winning streak to four straight and will carry that momentum with it into the Beanpot. As the ECAC race gets ever closer, Harvard will need confidence and drive on its side.

“We felt as a group that we were kind of due for it,” Zerter-Gossage said. “We had a lot of games that we lost just by a couple bounces early in the year. Since then we’ve cleaned things up, and I think the results are starting to show.”