The Big Green defeated the Crimson, 7-6, in a dramatic overtime contest 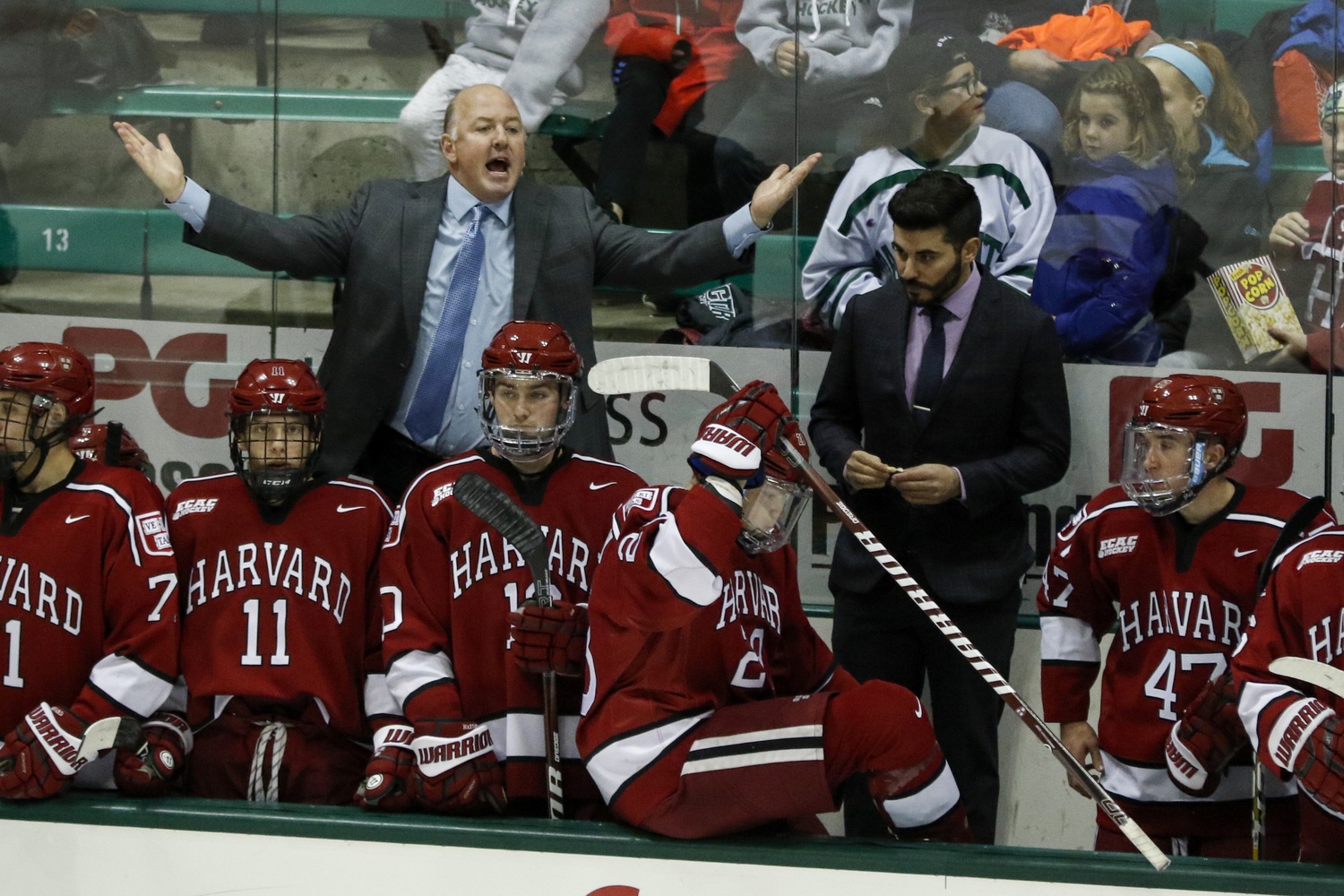 Tempers flared in this matchup of ECAC travel partners, as the Crimson and the Big Green combined for 14 minor penalties through 60 minutes of play. By Timothy R. O'Meara
By Stuti R. Telidevara, Crimson Staff Writer

HANOVER, N.H. — Coming into overtime, the Harvard men’s hockey team’s season opener against Dartmouth had already checked off just about everything you’d want to see in a hockey game. Goals aplenty, as the squads were tied, 6-6, after 60 minutes. Dramatic penalties galore. Even broken glass, the victim of a hard point shot during a Crimson power play, that required a brief delay to replace. An enthusiastic Big Green home crowd settled in for extra hockey, waiting to see how much longer the contest would go on.

“We had some positives and negatives, but we battled real hard,” said junior defenseman Adam Fox. “When you have a lead going into the third you want to hold it, and we persevered really well…but overall it’s disappointing not to come away with the win.”

After conceding a power play goal halfway through the first period, Harvard found itself on the receiving end of three straight man-advantage opportunities. For the first two of those, the power play unit — significantly different, and younger, than last year’s — had enough chances to tilt the shot clock wildly in the Crimson’s favor. On the final power play, with a little over a minute remaining in the period, the visitors finally broke through, as sophomore forward Jack Badini cleaned up loose change around the Dartmouth net. Twenty seconds later, junior forward Colton Kerfoot got his first career goal, once again after a tussle in the blue paint.

The floodgates opened from there, and with that came some extracurricular activities. The middle 20 saw seven penalties, including a contentious embellishment call against Badini that had head coach Ted Donato ’91 fuming on the bench. Each team potted two goals in the second; both Harvard goals came on the power play, from sophomore defenseman Reilly Walsh and rookie forward Baker Shore. The Big Green retaliated after each Crimson tally, bringing the score after two periods to 4-3 with the visitors leading.

“The game was choppy,” coach Donato said. “Which is somewhat to be expected, first game of the year, whatnot. But I liked the resilience of the group; [they] kept coming back.”

Additional power play goals in the third from Walsh and Fox, however, were not enough to preserve Harvard’s lead. Dartmouth entered the final period with extra energy, finding twine three times. The Big Green’s dangerous top line, with only one tally to its name against the Crimson coming into the game, combined three minutes after intermission for the go-ahead goal, and the team did not fall behind again. 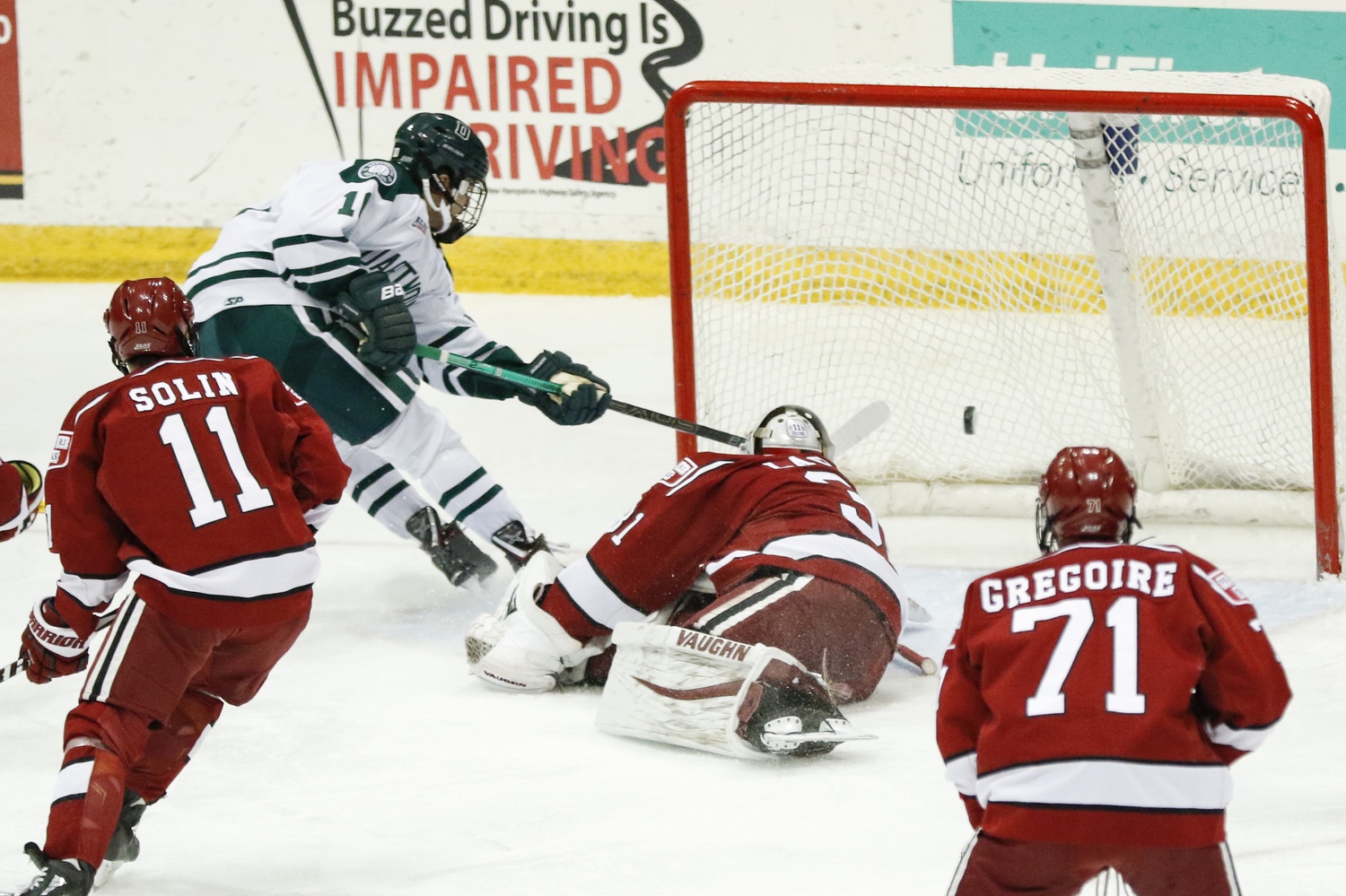 Big Green junior winger Shane Sellar had a three-point game (2–1—3), bringing his career total against Harvard to 4–3—7 in 11 games. By Timothy R. O'Meara

Despite the loss, Harvard has numerous positive takeaways, the most significant being the power play’s 5-for-7 contribution. The goal-scoring extravaganza also featured rookies notching their first points in crimson and white: forward Baker Shore tallied on the man advantage, while defenseman Jack Rathbone and forwards Jack Drury and Casey Dornbach each picked up assists.

“[Assistant coach] Rassey does a great job with our powerplay," coach Donato said. "We have some excellent players that shoot the puck and I thought we scored in a number of different ways…. That’s certainly a positive coming out of the game. If we get a game with five power play goals and score six goals, we should be able to taste victory after a game like that.”

Momentum on the 5-on-4s was driven by point shots from defensemen like Walsh, Fox, and Rathbone — unsurprising, given the Crimson blue line’s experience and skill. Saturday night was a multi-point outing for both Fox (1–3—4) and Walsh (2–0—0), which bodes well for a team with a young forward corps.

“We have some new pieces that are still trying to…find their chemistry,” Fox said. “Coming back for the third year and having the experience I have, the thing I want to do is step up, be a leader on this team and produce in every way I can.” 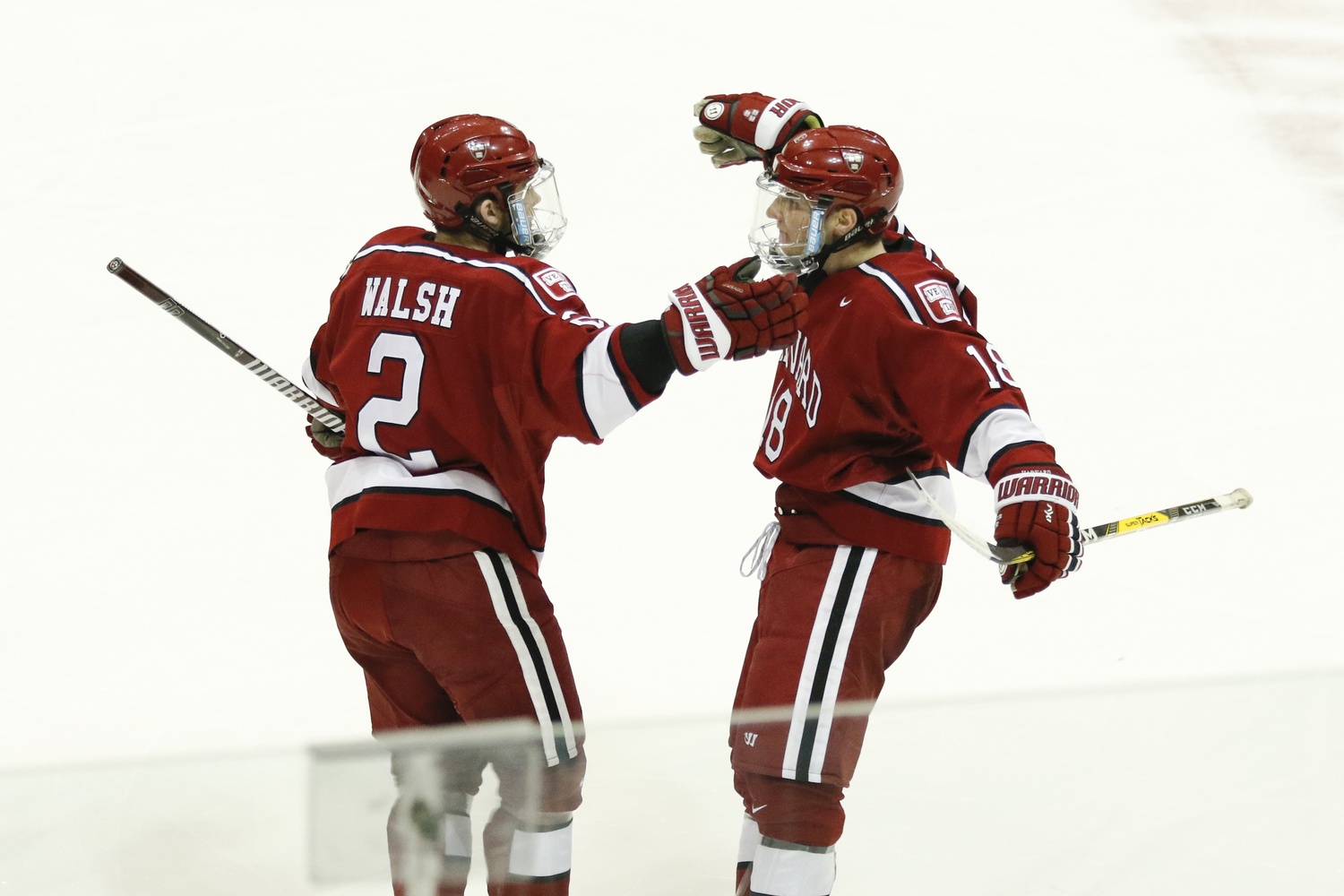 It's usually a good outing for Harvard when Walsh and Fox are at their best — together, the two offensive-minded defensemen scored three goals on Saturday. By Timothy R. O'Meara

Opening the season for the first time in his career, Lackey (7.04 GAA, .741 SV%) had alternating bursts of poise and shakiness. He stopped multiple breakaways, and slid pipe to pipe to rob a charging Dartmouth forward, to the chagrin of Thompson Arena. Still, conceding seven goals — five of which were at even strength — makes any contest difficult to win.

“I’m not taking [Lackey] off the hook either,” said coach Donato when asked if the onus for the Crimson’s goals against should be on the skaters or the goalie. “There’s five guys on the ice before it gets to the goalie…but I don’t think we got a good enough effort there to win either.”

The team will get back to righting the ship with a slate of home games next weekend, as Harvard plays host to Quinnipiac and Princeton.