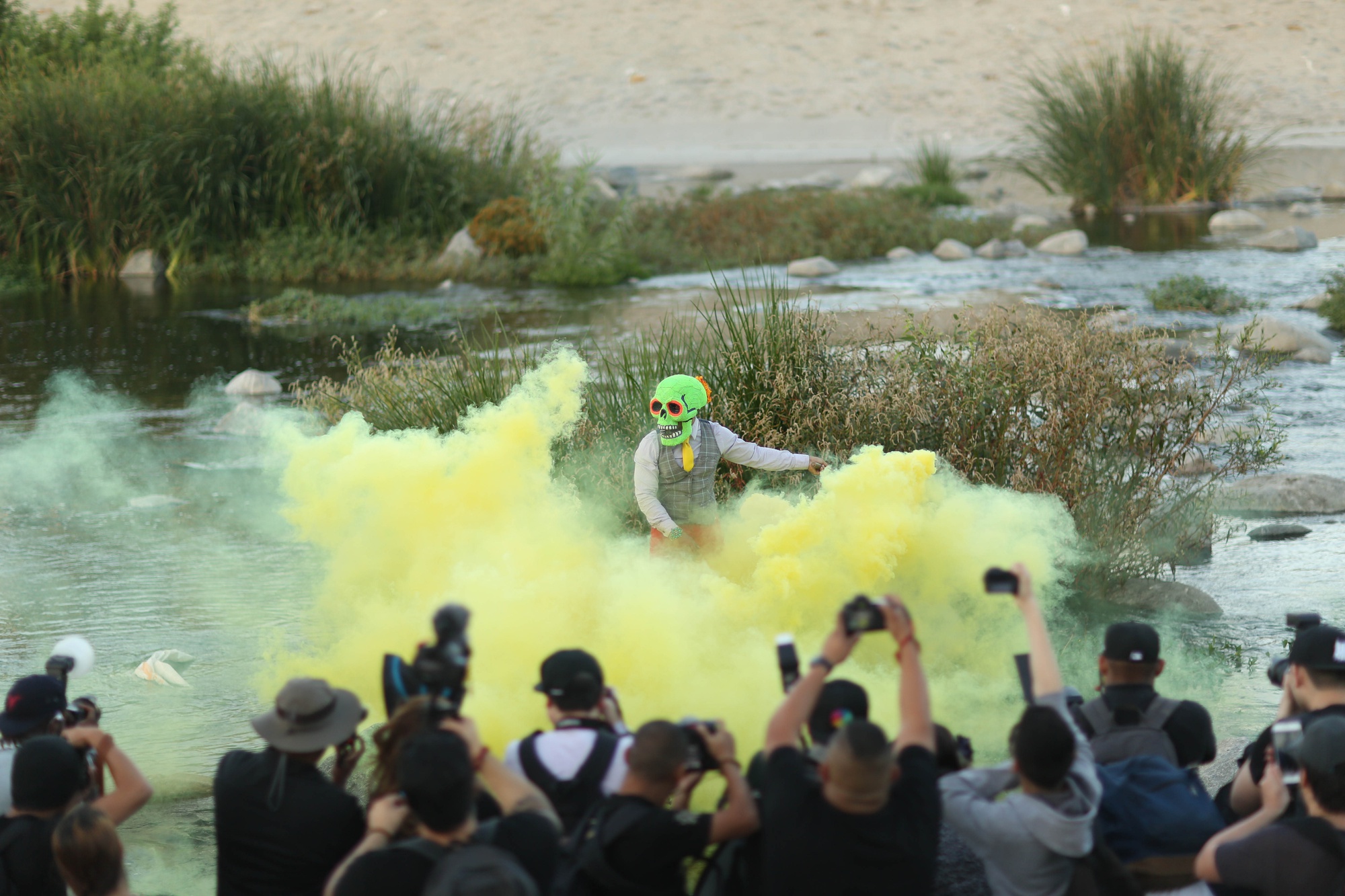 With every frame, I freeze less than 1/200 of a second. Bright blue smoke spills from the canister, enshrouding Butch — skull and all — in a thick, morphing cloud.
By Kai R. McNamee

My dad and I are crammed in a crowd of approximately 30 other photographers when Butch dons his neon green skull. Reflective plastic jewels and flowers elaborately decorate his Day of the Dead-inspired mask. He’s completely out of place on the boardwalk of the Santa Monica Pier — locals and tourists alike are taken aback by the scene.

Butch pulls the release on a smoke grenade and waves the canister in a slow arc over his head. The act is predictably followed by a wave of clicking. The crowd (myself included) eagerly fires away at the scene, hoping that a spray of exposures will capture at least one perfect moment. With every frame, I freeze less than 1/200 of a second. Bright blue smoke spills from the canister, enshrouding Butch — skull and all — in a thick, morphing cloud. 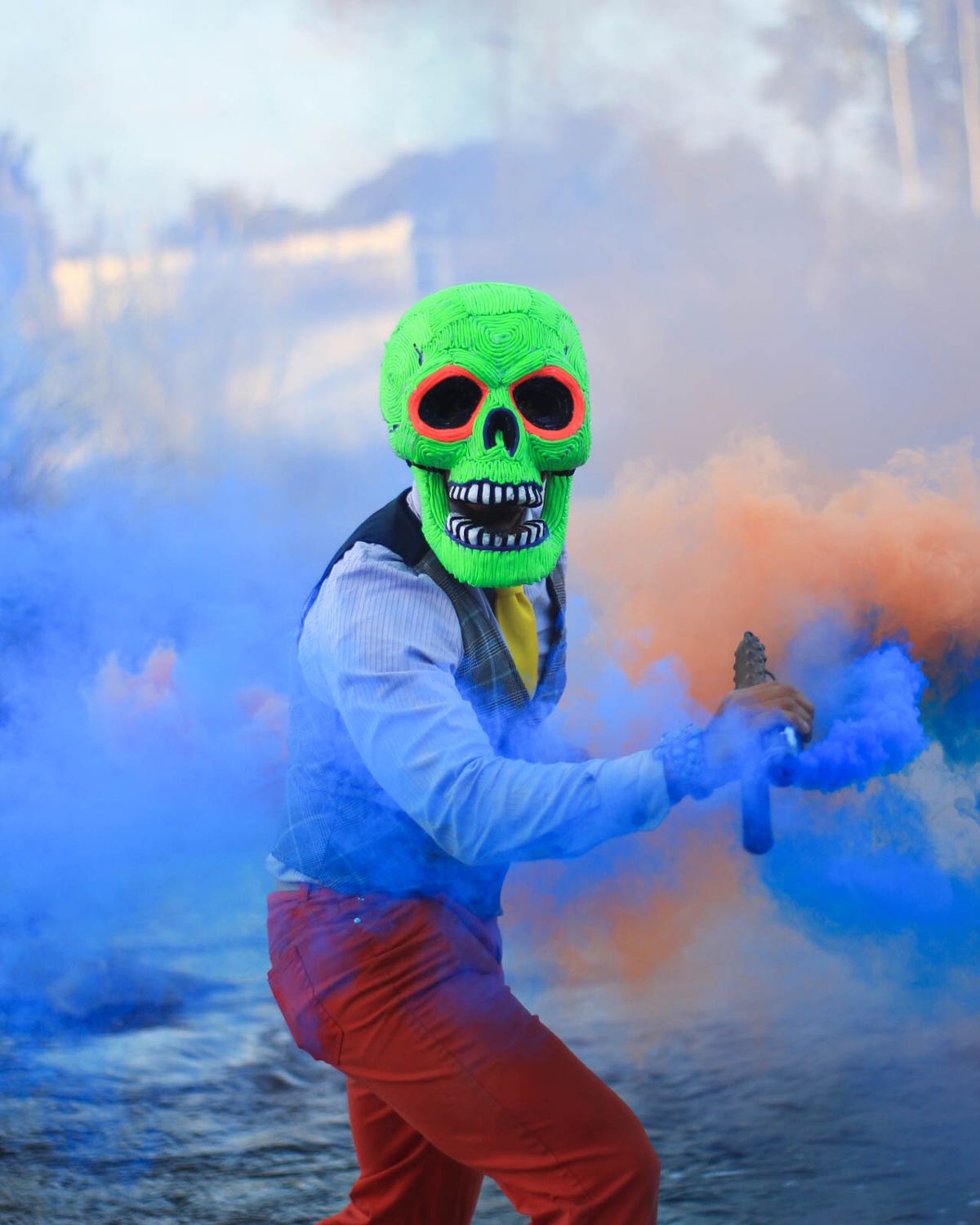 After about a minute, the smoke grenade sputters to a stop. The ocean breeze sweeps away the now-thinning blue cloud. I look around and easily find my dad in the crowd. His signature baseball cap is flipped backwards so he can look through the viewfinder of his camera. More noticeably, however, he’s the only middle-aged white guy here, probably double the age of the next oldest participant. He’s also one of the only people here shooting with professional-grade gear.

The evening’s event is organized by the owners of the Instagram page StreetMeetLA. The group hosts monthly meetups that attract an amateurish crowd of models and photographers. Like me, most of the participants are 18 to 21 years old and shoot with entry level equipment. But my dad is neither 18 to 21 nor inexperienced — he has been a professional wedding and portrait photographer since before I was born. He’s been to several of these StreetMeetLA events, and tonight he brought me along to show me the ropes of portraiture.

The crowd disperses and I rejoin my dad. He looks over my shoulder as I scroll through the photos I have just taken. Every few frames, he offers a complimentary “Nice shot,” or a critical “That’s out of focus.”

Butch, having removed his skull, makes his way over to us, talking to other photographers along the way. He joins me and my dad, looking at my photos.

“That shot’s sick,” he says. “Could you DM that to me? What’s your Instagram?”

Soon he’s moving on again, but as he’s about to walk away, he turns back to me.

“Hey man, it’s so cool you bring your dad to these things.”

He departs, and my dad and I exchange glances, smiling at the irony of his comment. We laugh about it on the car ride home. 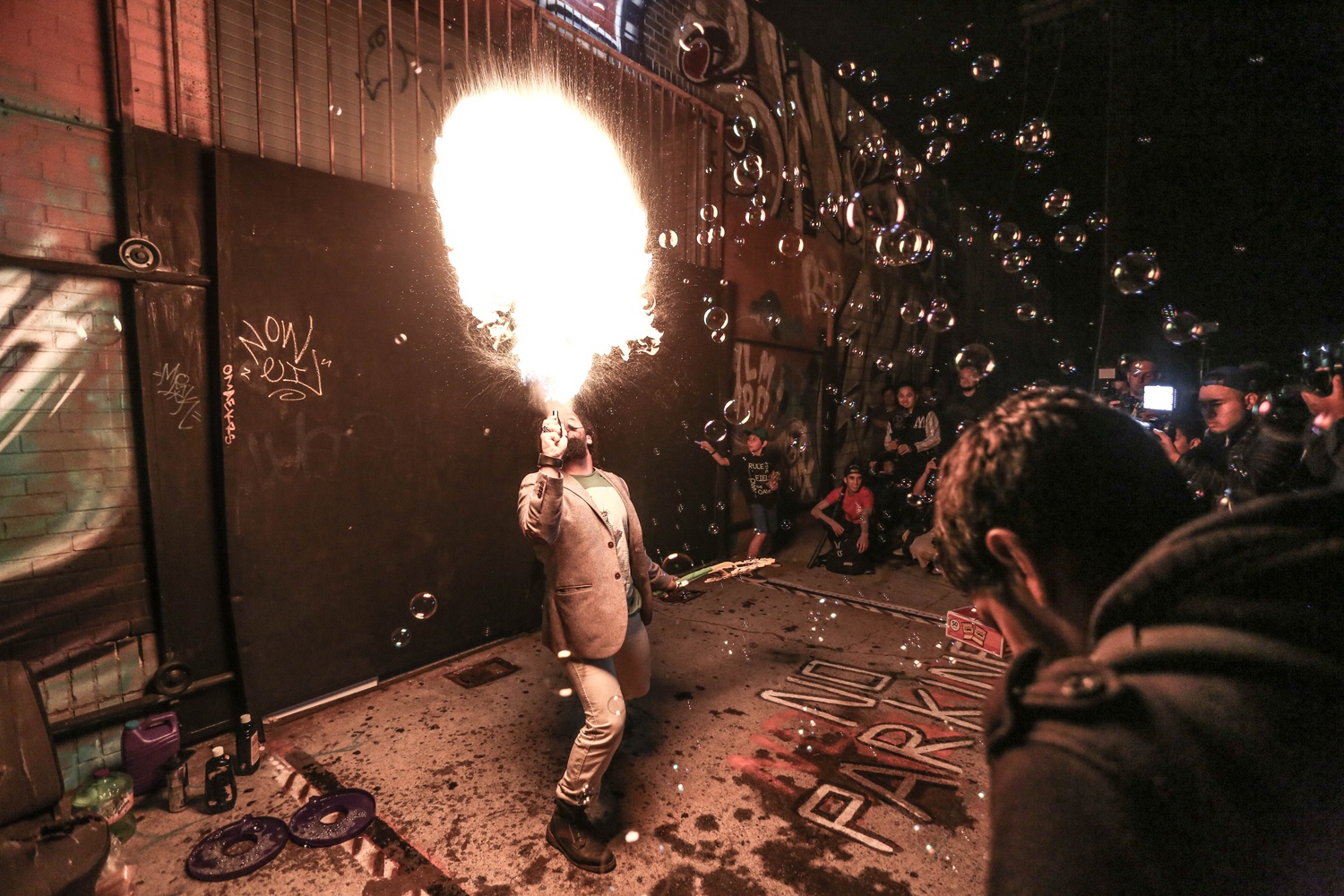 Fire and Bubbles in the Los Angeles Arts District. By Courtesy of Douglas N. McNamee

“The fire is going to be pretty bright, so you’re gonna have to stop down to compensate for the extra light,” my dad explains.

We’re in the Downtown Arts District, the Los Angeles skyline shimmering in the distance as the sun sets behind us. It’s another StreetMeetLA event, but Butch is replaced by a shirtless fire-breather with tattoos snaking around his midsection. Again, my dad and I find ourselves in a crowd of trigger-happy photographers. We’ve now been to a handful of these meets together, and going to them has become somewhat of a monthly ritual.

The firebreather signals with his fingers before spitting a blazing inferno above our heads. There’s a flurry of clicking, and then the moment is gone. Everyone’s now looking down at their camera screens.

“Yo that shit’s so dope,” one photographer practically squeals.

My dad quietly points out to me that the enthused photographer’s lens cap is on and his flash is useless for the lighting situation. “But that shit’s so dope yo,” he says, trying to mimic the swagger of the hip LA youth. He laughs at his own imitation, and I join him. 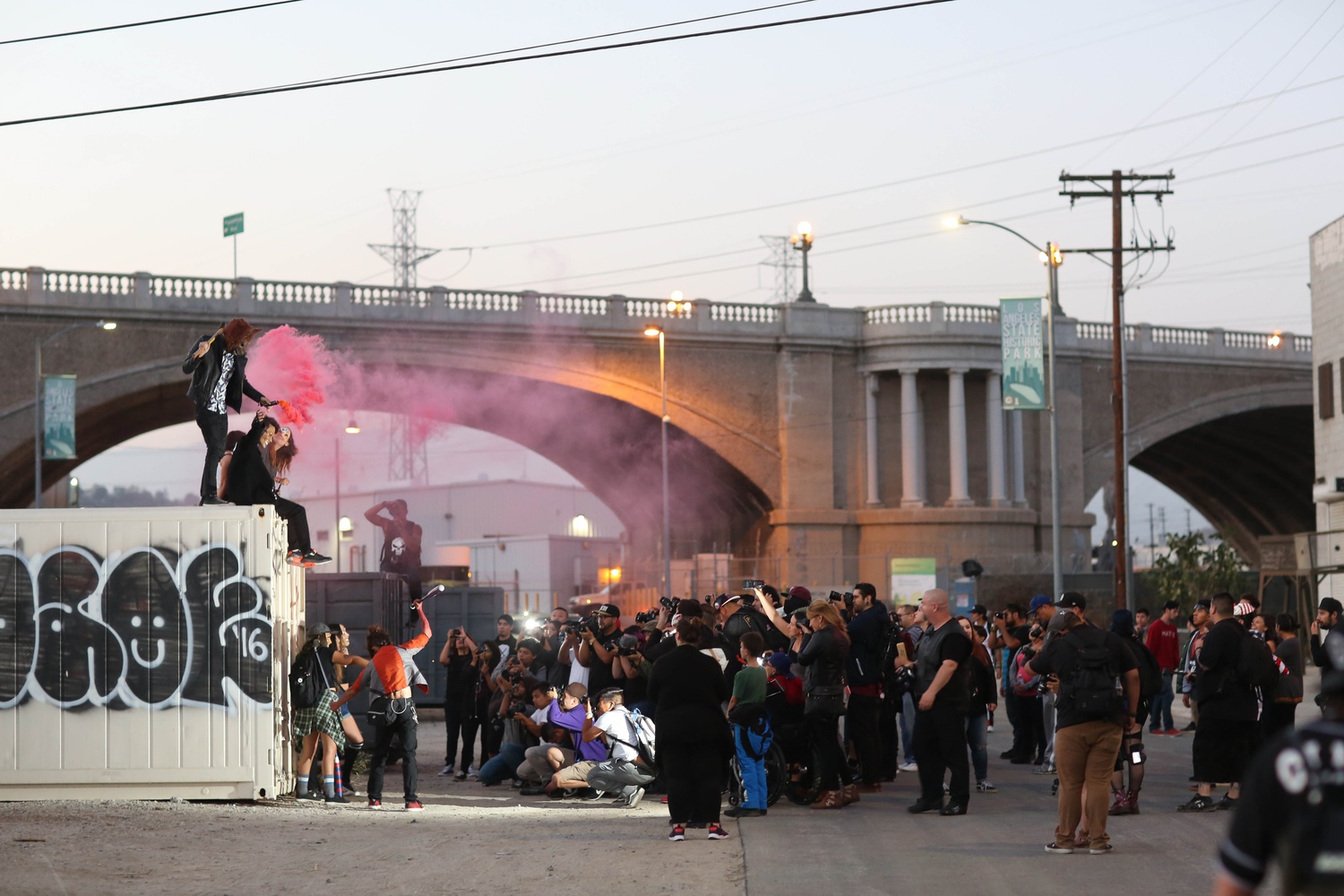 Photographers crowd around models at a photo meet in downtown Los Angeles. By Courtesy of Douglas N. McNamee 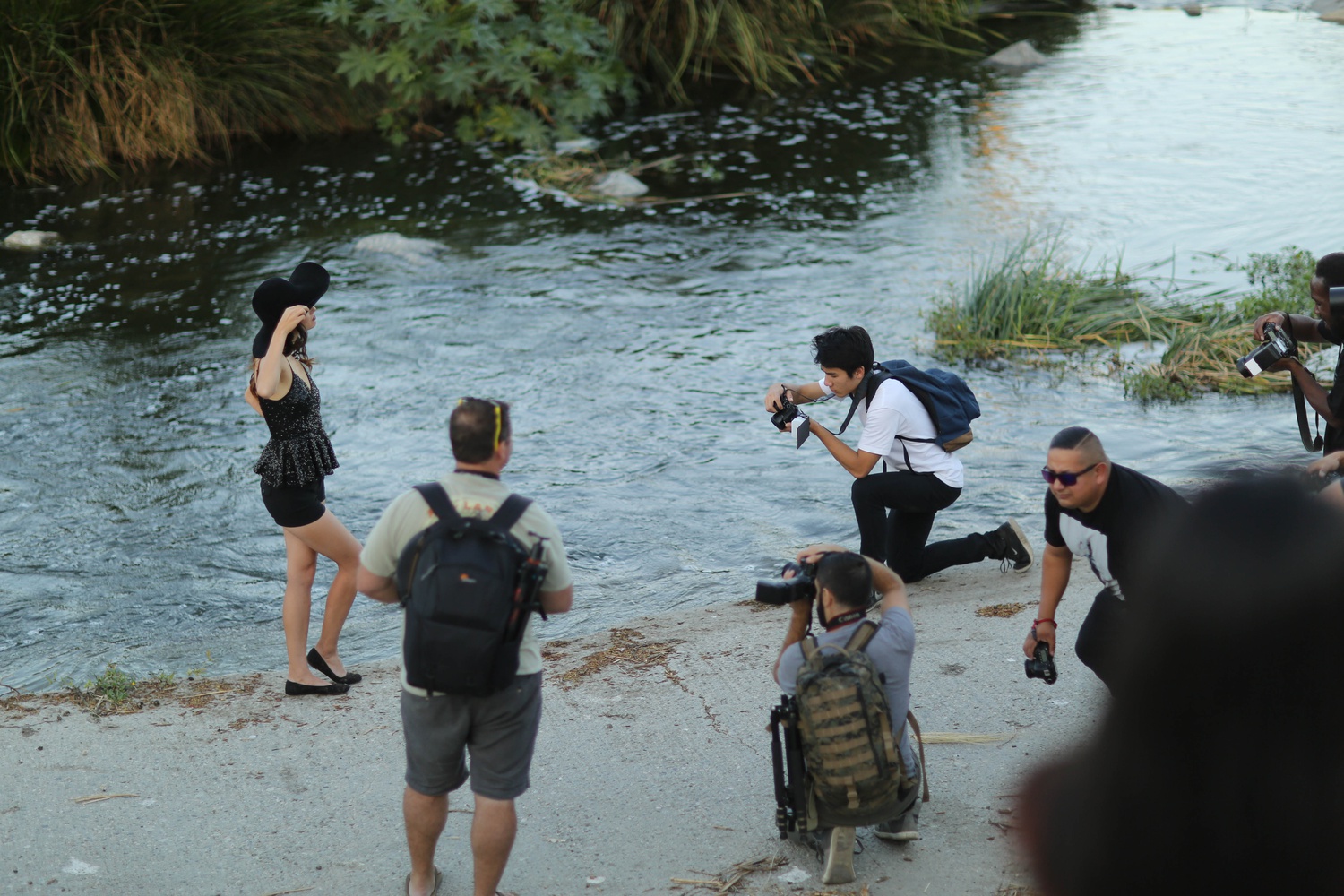 Kai photographs models at a StreetMeetLA event. By Courtesy of Douglas N. McNamee

The phone rings a few times before my mom picks up.

“Is something wrong?” she asks urgently.

My mom’s reaction indicates that I probably don’t call enough. She puts me on speaker while the three of us — me, my mom, and my dad — talk about our weeks. They tell me about the family dumpling business, and they share the usual customer stories: barefoot kombucha-drinking hipsters, people demanding gluten-free this or that. It’s all very LA. It’s home, and yet it’s worlds away.

“Have you been taking any photos?” my dad asks.

I tell them that I just got a roll of film developed from the FOP trip I led. My dad and I talk about camera gear for a little, and I can hear my mom playfully hit my dad in attempt to change the topic of conversation — she thinks the gear talk is just encouraging me to spend money. I can imagine the face she’s making, a scrunched smile as she delivers the classic Chinese mom “ai ya!”

I tell them about what I’ve been working on for The Crimson. My dad tells me about some photos he saw in the news recently. We’re on opposite sides of the country, but through photography, we connect in a way that we have not in some time. Photography has replaced the trips to the hardware store, the evening car rides to hockey practices, the collaborative jam sessions at music stores.

I text the link to my latest photo essay to the family group chat. It’s quiet for a moment as they scroll, taking in each image. I can hear the smile in my dad’s voice as he breaks the silence.