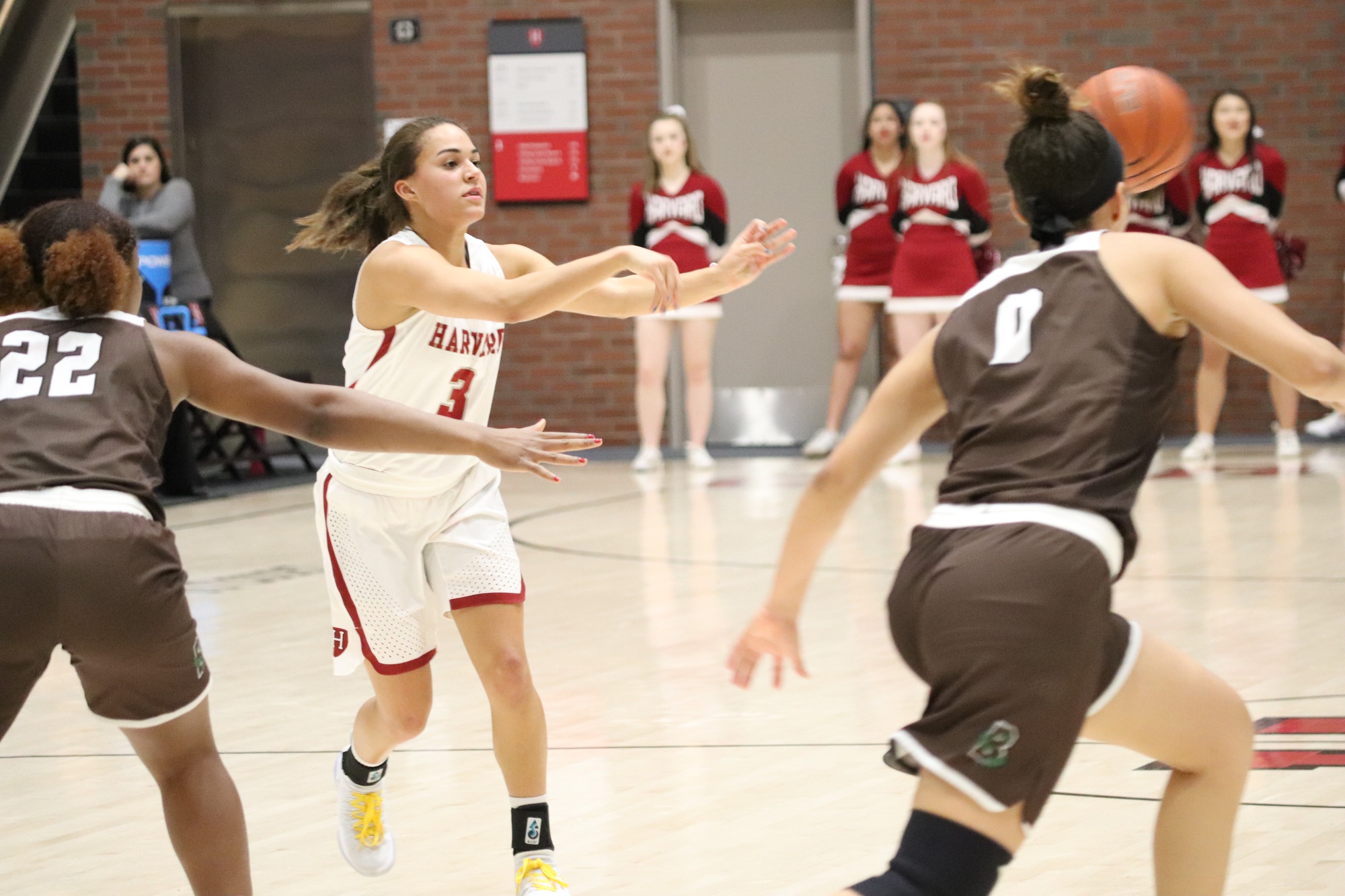 On a night in which Harvard rolled to a 98-55 romp — good for easily the Crimson’s biggest margin of victory in Ivy League play — over Brown at Lavietes Pavilion, junior guard Katie Benzan added another personal milestone to a quickly growing list.

A month after she became Harvard’s 20th 1,000 point scorer (a list that is also soon likely to include co-captain guard Madeline Raster, who has scored 991), the Wellesley native hit her 262nd career three pointer early in the third quarter, breaking a Crimson record long held by Erin Maher ‘93.

“I didn’t even know I was close to that record,” Benzan said, “So it was a surprise. I was taken aback. I didn’t know until it was announced and all of my teammates came and gave me the biggest hugs, so I was shocked. It was nice that I was able to get those hugs from my teammates and my coaches, because they are the reason that I broke that record.”

Benzan’s 19 points on 7-of-9 shooting led Harvard on Friday, but she was hardly the only standout performer for the Crimson. All five starters were able to crack double figures in scoring despite spending much of the second half with the game having been long since decided.

Three weeks ago in Providence, Harvard (13-9, 6-3 Ivy) and Brown (9-16, 1-8) traded blows throughout a frenzied first half and entered the break 48-48 before the Crimson pulled away in the second half. This time around, Harvard made it obvious from the opening tip that it was the superior team, jumping out to a 20-3 lead and going into halftime up by 25.

Raster may not have reached the 1,000 point mark against the Bears, but the South Bend, Ind. native did everything else on Friday. She dove after countless loose balls, played stifling defense, and started a number of fastbreaks with steals or quick passes ahead after rebounds. The co-captain finished with 11 points, 12 rebounds, and 8 assists in what was one of her better all-around performances of the season.

When Raster was subbed out with 8:20 to go in the game and the Crimson up by 40, it looked as if she had seen her last action of the night. But coach Kathy Delaney-Smith put her back in with 4:26 left in the hopes that she would get the two assists that would have given the senior her first career triple double.

“I didn’t have the scorers out there, but I wanted Madeline to see if she could get the two assists,” Delaney-Smith said. “This was the [Raster] that we know and love. She was phenomenal on both ends of the court tonight.”

Bush scored 16 points on 7-of-8 shooting despite playing just 16 total minutes, including only four in the second half. She looked unstoppable down low, scoring with ease and gobbling up offensive rebounds.

The Federal Way, Wash. native’s 16 minutes were lowest among the starting lineup, but not by much. The other four starters played between 23 and 24 minutes as Delaney-Smith was able to rest her key players ahead of Saturday night’s crucial showdown with Yale.

Overall, the Crimson was dominant in every facet of the game. Unlike in Providence, Harvard took its time offensively, refusing to get into a track meet with the offense-first Bears. The Crimson shot 55%, largely because it was able to drive to the hoop or dump the ball into the post and get easy layups. Harvard ended the game with 44 points in the paint to Brown’s 14.

Against fast-paced Brown, the Ivy League’s worst defense, the offensive explosion was to be expected, especially after the Crimson scored 100 points in Providence three weeks ago. The difference Friday was Harvard’s defensive effort. The Bears’ scoring output dropped from 83 in the first meeting between these teams to 55, as the Crimson was able to shut down Gaziano — Brown’s main offensive weapon — particularly when the game was in doubt.

Playing near her hometown of Natick, Mass., Gaziano was unable to match her 28 point performance against Harvard the first time around. The 19 point-per-game scorer end up with a respectable 16 points, but most of those points came long after the game had been decided. In the first half, Brown’s leading scorer put up just four points on 1-of-5 shooting.

The Crimson’s stifling defense clearly had an impact on the Bears’ shot selection from the opening tip. Brown was forced into one contested shot after another and had far more ugly-looking shots than makes early on. The Bears shot just 7-of-29 (24%) from the floor and 2-of-13 (15%) from three point range in the first half.

Aside from Raster’s brief four minute cameo and two minutes for senior guard Nani Redford, Harvard’s starters were able to watch the fourth quarter from the bench, allowing seldom-used players like sophomore forwards Maddie Stuhlreyer and Maria Guramare, sophomore guard Matilda Salen, and senior guard Kelsey Bogdan to get real playing time and to score a combined 16 points in the final frame as the Crimson extended its lead to its eventual 43 point margin of victory.

Harvard’s key players will presumably get a more normal share of playing time Saturday in a crucial game against Yale (15-9, 5-4), which is coming off of a surprising two point loss to Dartmouth on Friday night. The Crimson will be looking to exact revenge after the Bulldogs won a heartbreaker in New Haven three weeks ago on a buzzer-beating three. With a win, Harvard would also earn its first weekend sweep in league play and all-but clinch a spot in the Ivy League tournament, which will take place in three weeks in New Haven.