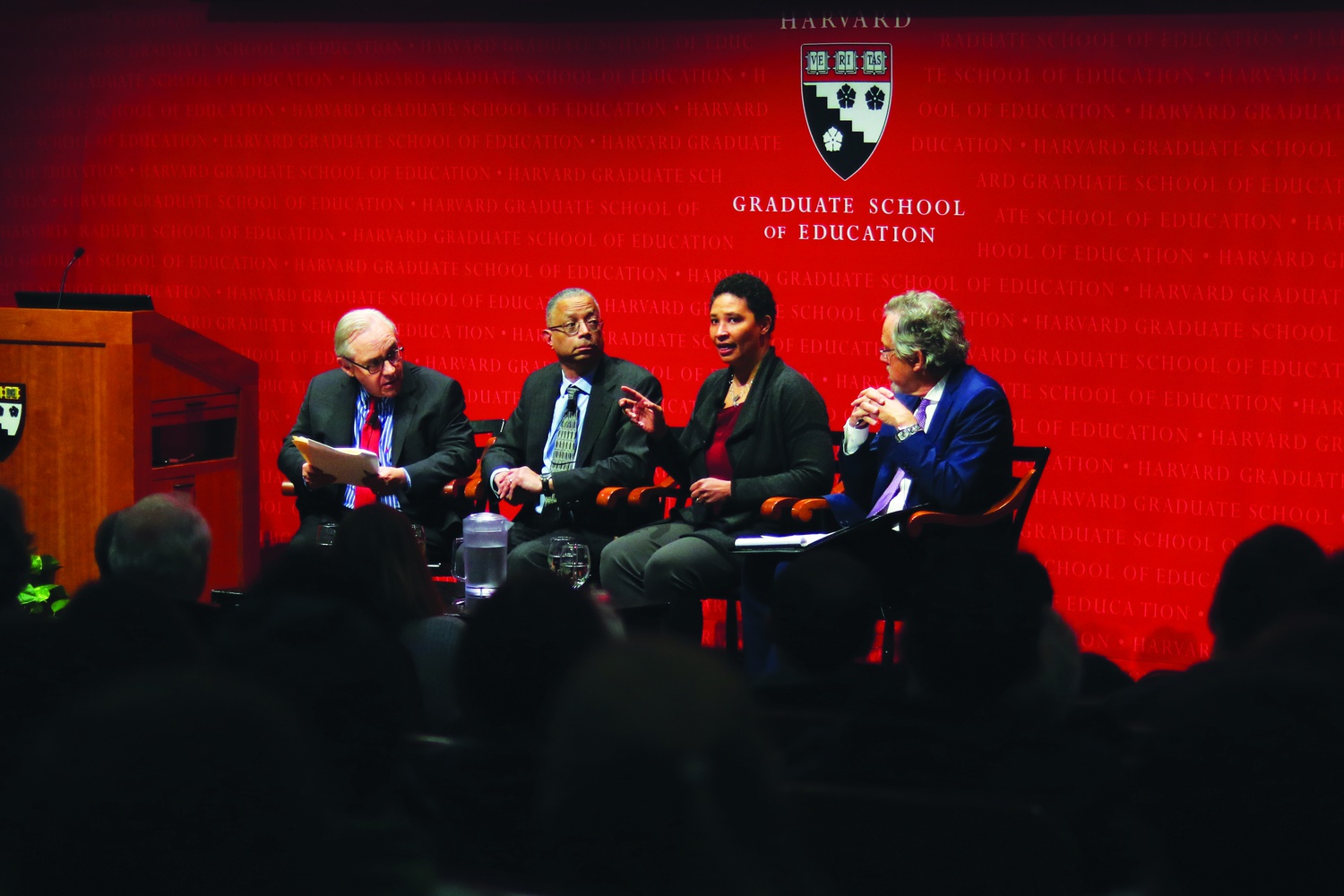 Danielle S. Allen remarked on ways to improve social inequality through a focus on civic education Wednesday evening during a Harvard Graduate School of Education's Askwith Forum event. The panel was a conversation about poverty, inequality, and racial injustice in the U.S. By Mariah Ellen D. Dimalaluan
By Joshua S. Archibald, Crimson Staff Writer

Five professors from across the Northeast gathered at a forum at the Harvard Graduate School of Education Wednesday to discuss the causes of racial inequality in the United States education system. They also brainstormed solutions for bridging gaps between white children and children of color.

The forum, which was part of the school’s Askwith Forum events — a series of public lecture on challenges in modern American education — coincided with the 51st anniversary of the landmark 1968 Kerner Commission report, a document that detailed the extent of racial inequity in the United States at the time.

Alan Curtis ’65, the president of the Milton S. Eisenhower Foundation and co-editor of a 50-year update of the Kerner Commission report, delivered opening remarks, during which he described the persistent problem of racial inequality in the 21st century.

“Overall, child poverty, deep poverty, income inequality, wealth inequality, public school segregation, all have increased in the 50 years since the Kerner Commission,” Curtis said. “To begin to heal our divided society, we need to accelerate the movement to base policy on evidence, not ideology.”

Panelist E.J. Dionne ’73, a professor at Georgetown University and a visiting professor at the Divinity School, said that in many ways, the United States has moved “backward” on eliminating racism in education systems.

“The time we live in remains urgent and it’s fair to ask why, on so many issues, does our country still seem to be waiting,” Dionne said.

Government professor Danielle S. Allen, who also served as a panelist, said the driving force behind continued racial inequality was the focus on top-down solutions rather than engagement with citizens.

“At the end of the day citizens need to be direction-setters,” Allen said. “If we haven’t taken the time to ask citizens what direction they want to go in out of the field of possibilities for solving this, then we’re in danger of not securing the legitimacy that is the ground for will.”

Despite agreeing on the continued presence of inequality in education, the panelists offered differing opinions on how to best bridge the gap. In his opening remarks, Curtis suggested that increased funding and training for public education would be the best solution.

Allen, however, said the solutions were not as clear.

“I don’t agree with the premise that we know what we need to do," Allen said. "For the last 25 years, the policy universe has focused on developing technocratic solutions and then telling people that 'we the experts know' and 'why can’t you get on the train?' And I think that’s actually the problem."

Hilda M. Jordan ’19, who attended the forum, said she agreed with Allen’s centering on locally-focused solutions.

“One of things that is largely missing is the emphasis on real people and individuals and not just the efficacy or the percentages of a certain policy,” she said.

—Staff writer Joshua S. Archibald can be reached at joshua.archibald@thecrimson.com.