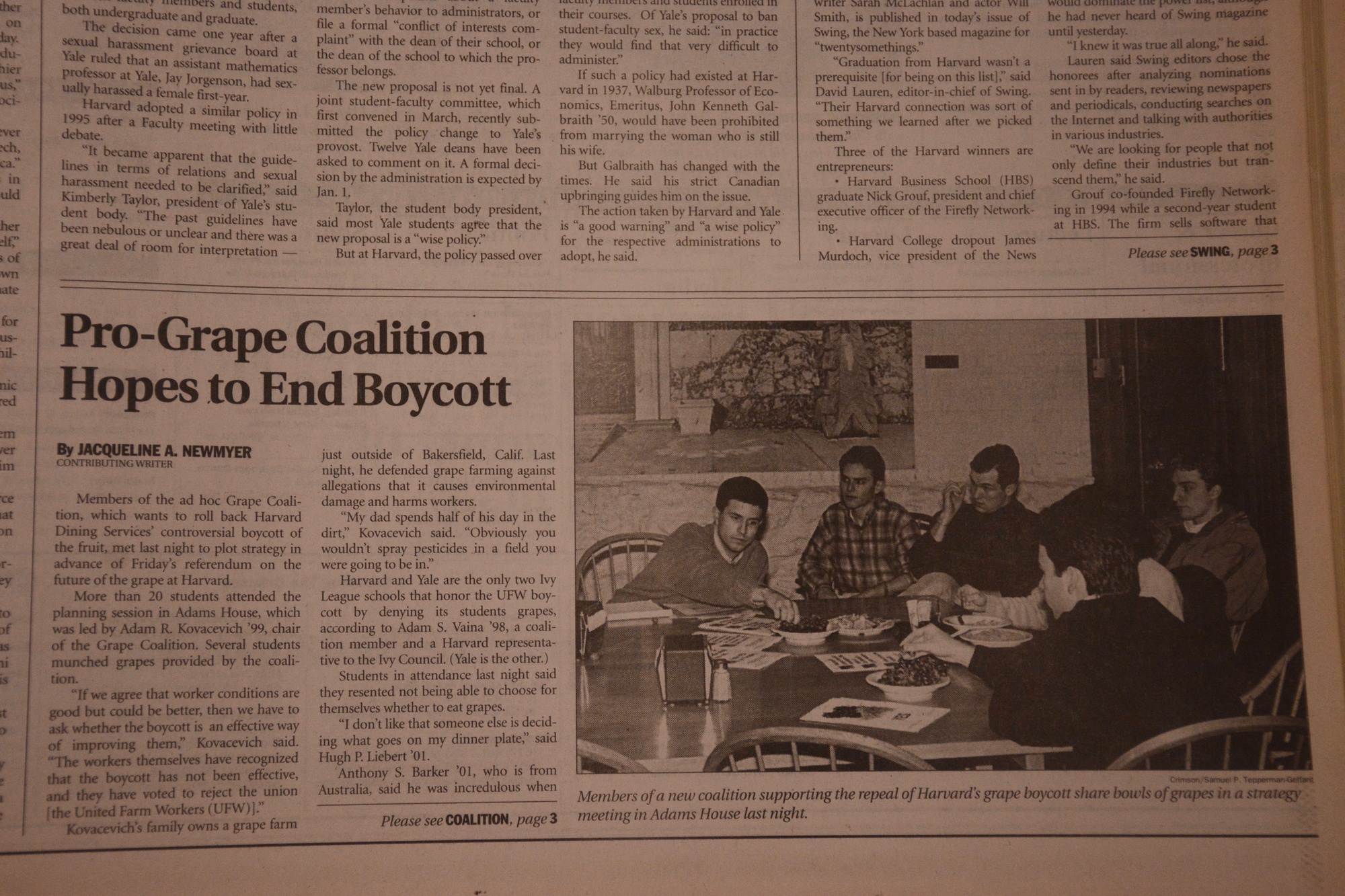 By 1997, the students who had pressured Harvard to boycott grapes in 1992 had graduated. To many students, the absence of grapes didn’t signify the presence of an ongoing boycott, but rather simply went unnoticed.
By Paul G. Sullivan

In November of 1997, the Fruit of the Loom logo, once relegated to tags on the underwear of dowdy freshmen boys, found itself on 400 posters throughout Harvard’s campus. Adam R. Kovacevich ’99 made and distributed these posters to call attention to what he saw as an important political issue: grapes.

The month before the Fruit of the Loom logo graced campus, Harvard University Dining Services announced that it would be bringing grapes back to Sunday brunch, ending Harvard’s five-year-long support of the United Farm Workers’ (UFW) grape boycott. The UFW, founded by César Chávez and Dolores Huerta, was the first farmworkers’ union in the United States. Since 1986, the UFW had been boycotting grapes because they said that pesticide exposure was poisonous, endangering grape workers and their families. Unlike the UFW’s earlier boycotts, the 1986 boycott didn’t gain a wide following, and sales of grapes increased in the US throughout the late ’80s and early ’90s. While the movement waned on the national stage, elite universities like Harvard and Duke joined the grape ban in the early ’90s due to pressure from student activists.

By 1997, the students who had pressured Harvard to boycott grapes in 1992 had graduated. To many students, the absence of grapes didn’t signify the presence of an ongoing boycott, but rather simply went unnoticed.

Yet, in the days following their announcement, HUDS management received twelve yellow comment cards — the analog version of texting feedback to HUDS today. Eleven of the cards opposed lifting the grape ban. Throughout November, those yellow cards would metamorphose into hundreds of posters and pamphlets and over 30 stories in The Crimson as students prepared for The Great Grape Referendum. Conducted by HUDS, the referendum allowed students to decide whether Harvard should continue its support of the UFW’s boycott or if dining room tables should be laden with grapes once again.

As was the case in 1992, there were students who supported the boycott. Members of Harvard Radcliffe Raza, a Latinx student organization, and the Progressive Student Labor Movement (PLSM), the predecessor to the Student Labor Action Movement, joined forces to support the continuation of the boycott.

“For Raza, Chávez was one of our heroes, and so we wanted to honor the ongoing boycott,” says Roel Saldivar ’01, a member of Raza. “You also had your prototypical activist dude from PLSM with the sandals and the long hair coming to Raza meetings to talk about labor issues. It was really cool.”

According to Saldivar, Raza and PLSM combined their Listservs — “email was just becoming big,” Saldivar remembers — and forwarded literature from the UFW about working conditions on grape farms to Harvard students.

On the opposing end, a group of students “would storm the dining halls and say, ‘Don’t you want grapes? Yeah, grapes taste good!’” recalls Edward Childs, a HUDS worker who supported continuing the boycott.

These students were The Grape Coalition. Founded by Kovacevich, they advocated lifting the grape ban. According to The Crimson’s coverage in 1997, The Grape Coalition represented “traditionally hushed conservatives” making themselves visible on campus, not unlike Kovacevich taking the usually hidden Fruit of the Loom logo and emblazoning it on 400 posters across campus.

These posters stated that not only was “the situation of grape workers much improved” but also that “Grapes Are Tasty.” These three words echoed across campus throughout November, becoming the group’s wry motto. 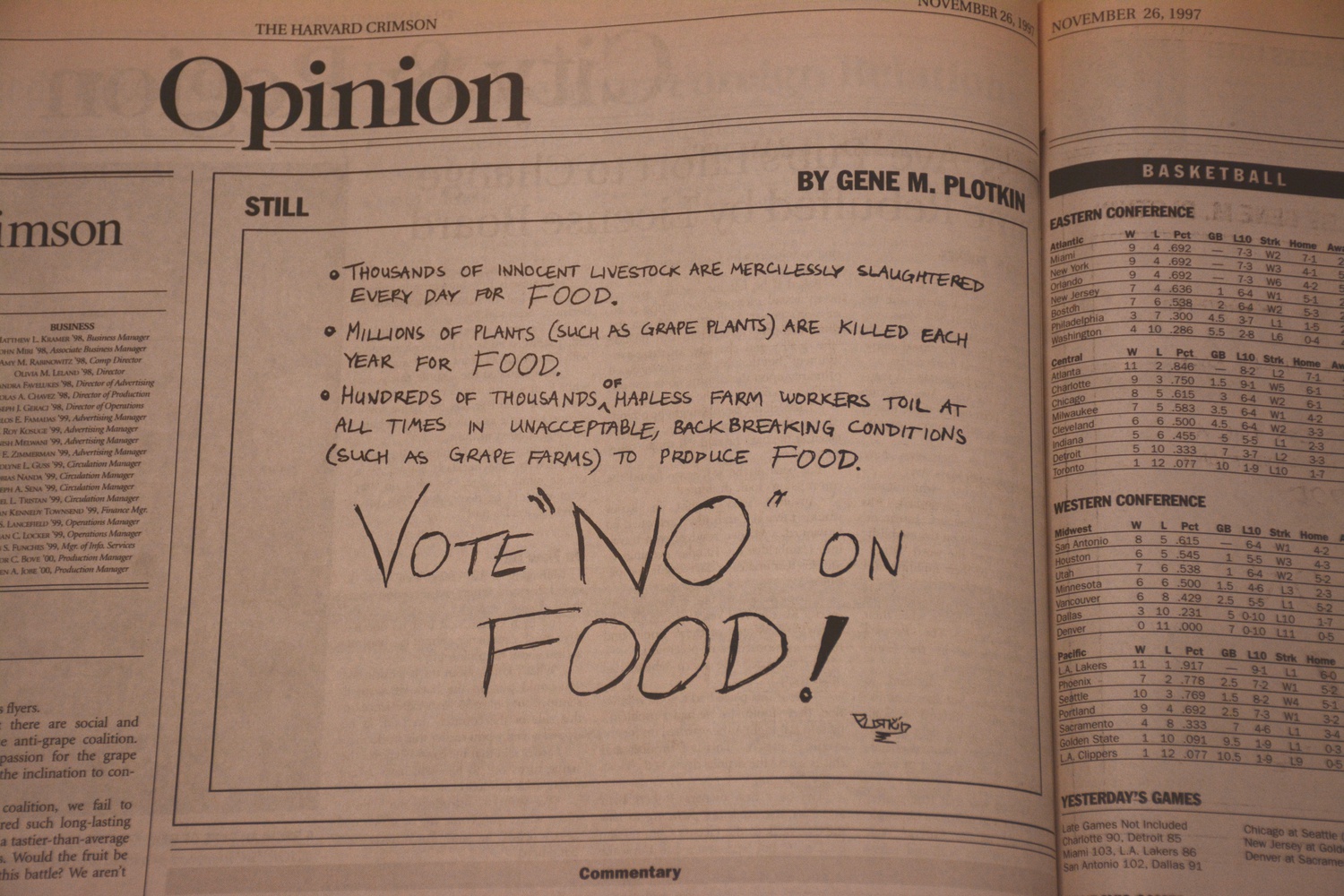 A cartoon run in The Crimson parodying the great grape debate. By Ellis J. Yeo

For Kovacevich — whose father owned John J. Kovacevich & Sons, a grape farm in California — his “pro-grape” stance meant opening up discussion on campus. “One of my goals was to have a genuine, two-sided debate. I had a distinct sense that there were not always both sides presented to issues on campus,” he says.

Frank E. Pacheco ’99, another member of The Grape Coalition, looks back at his involvement similarly. “I came at it from a perspective of objecting at the attempt to politicize the dining hall. If one group chooses to make political speech with their mouth, that’s fine, but the dining hall isn’t the correct venue for that,” Pacheco says.

Although Kovacevich claims that the group’s aims were to open discourse around the grape boycott, Pacheco says that The Grape Coalition’s and other pro-grape students’ organization strategy was to “devolv[e] into parody and outright mockery.”

In the weeks leading up to the referendum, the grape issue was parodied and mocked across campus. Sham advertisements for a “Grape Forum” with Professors George Will and Cornel West appeared around campus. On Dec. 3rd, the day of the grape referendum, the pranks reached their fever pitch when unidentified male students stood on the steps of Widener Library “dressed as women screaming and supporting the continual dehumanization of grape pickers in California,” according to a letter in The Crimson.

To Childs, the jokes of pro-grape students were “playing on class differences” between those on the pro- and anti-grape sides of the debate.

To Pacheco, this humor was merely “students lampooning the excessive seriousness with which other students were taking the debate.”

Even some members of The Crimson, which had taken an anti-grape editorial stance, embraced the humor of pro-grape students. Gregory S. Krauss ’00, a staff writer for The Crimson at the time, remembers “sitting around in the writer’s room and [writers] talking about how many grape puns we could think of to put in our headlines.”

The wry humor that tinged the issue was captured not only on Harvard’s campus, but also in the Wall Street Journal’s middle column, where the newspaper’s humor pieces ran at the time. In his article “Sour Grapes? Fine Whine? Students Debate Harvard Ban,” Dana Milbank milked the debate for every possible joke, referring to “the recent ferment at Harvard” and referencing the students’ “juices flowing” during debate.

Milbank’s prose isn’t, however, able to make light of the sincerity and seriousness of students from Raza and PLSM, who were on the anti-grape side of the debate. In Milbank’s article and on campus, they were impermeable to the sardonicism that was soaking the issue everywhere else.

This is because, for RAZA and PLSM, the issue wasn’t about opening up debate on campus, but about the lives of grape workers and their children.

“It’s about the process behind the grapes. We needed to honor the workers and that the boycott was still going on,” Saldivar says. Addressing the boycott’s inefficacy on the national stage, Saldivar says “It’s not about the effectiveness. It’s about the principle.”
Similarly, for a lot of HUDS workers, “the plight of grape workers hit close to home,” Childs says. “HUDS workers had a strike in 1988. Some of our best solidarity came from the grape workers. Some of the stuff they went through and some of the stuff we went through aren’t all that different.”

Still, despite their ability to look past humor and grasp the consequences of the issue at hand, some anti-grape students have regrets that they didn’t push these points further upon the student body, says Sergio J. Campos ’00, a Raza leader. 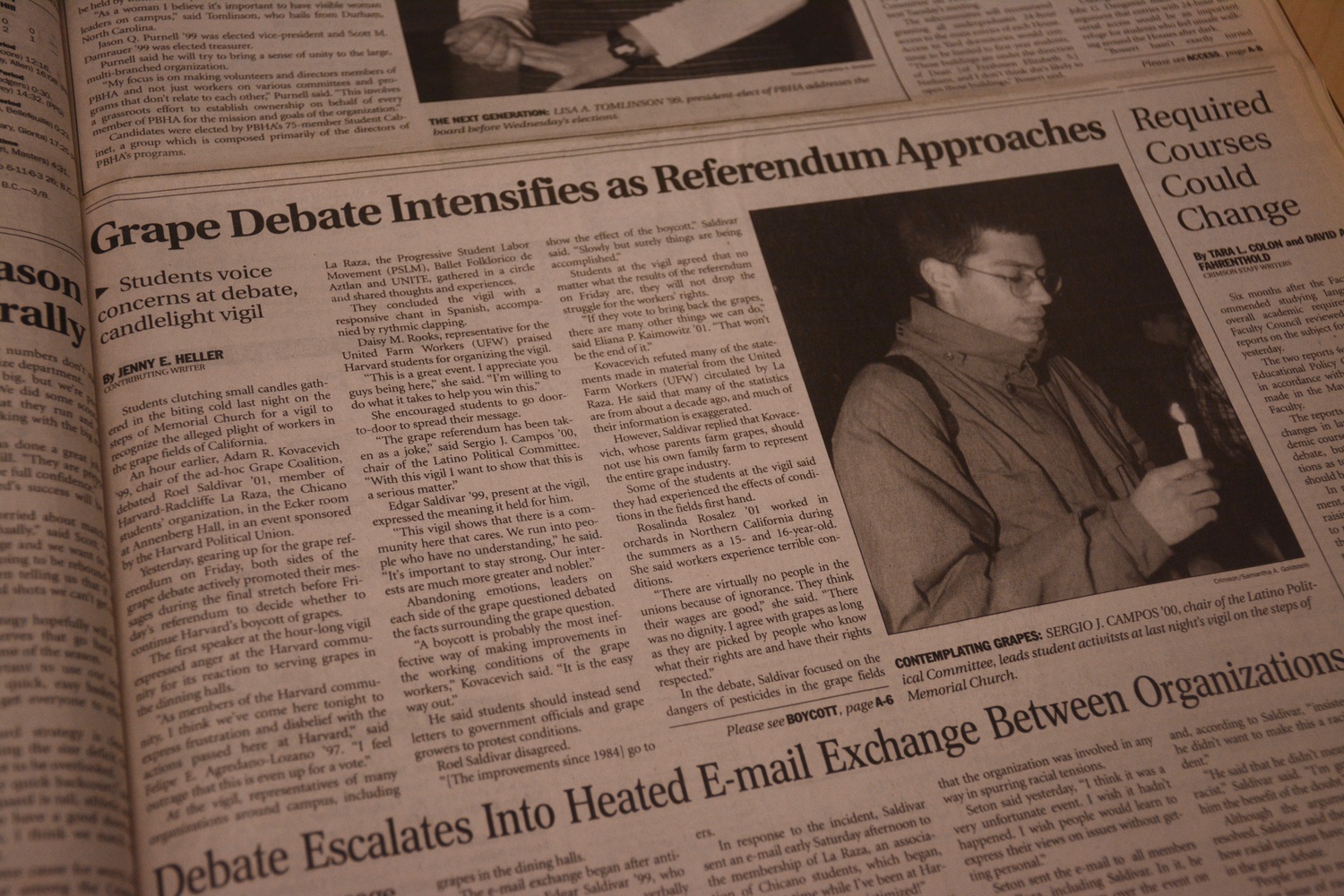 Sergio J. Campos ‘00, a member of Raza, leads students in a vigil on the steps of Memorial Church in solidarity with the UFW. By Ellis J. Yeo

In the end, The Grape Coalition won, PLSM and Raza lost, and students voted to lift the ban — grapes could be eaten at Sunday brunch once again.

Campos says that this was due to “something a little restrained in Raza’s effort. The big vision of 1960s student activism, taking over Massachusetts Hall: there was a feeling that we weren’t going as far as those students did.”

While Campos viewed the outcome of the referendum as a failure of anti-grape student organizers, Pacheco viewed it as indicative of an overall rising tide of conservatism in the student body.

“The big difference was that, in this instance, the group of students who fell in the middle of the spectrum who didn’t have a strong opinion on the issue or just didn’t care even, sided with conservatives,” Pacheco says. He remembers the great grape debate as a “a conservative backlash against campus discourse.”

—Magazine writer Paul G. Sullivan can be reached at paul.sullivan@thecrimson.com.