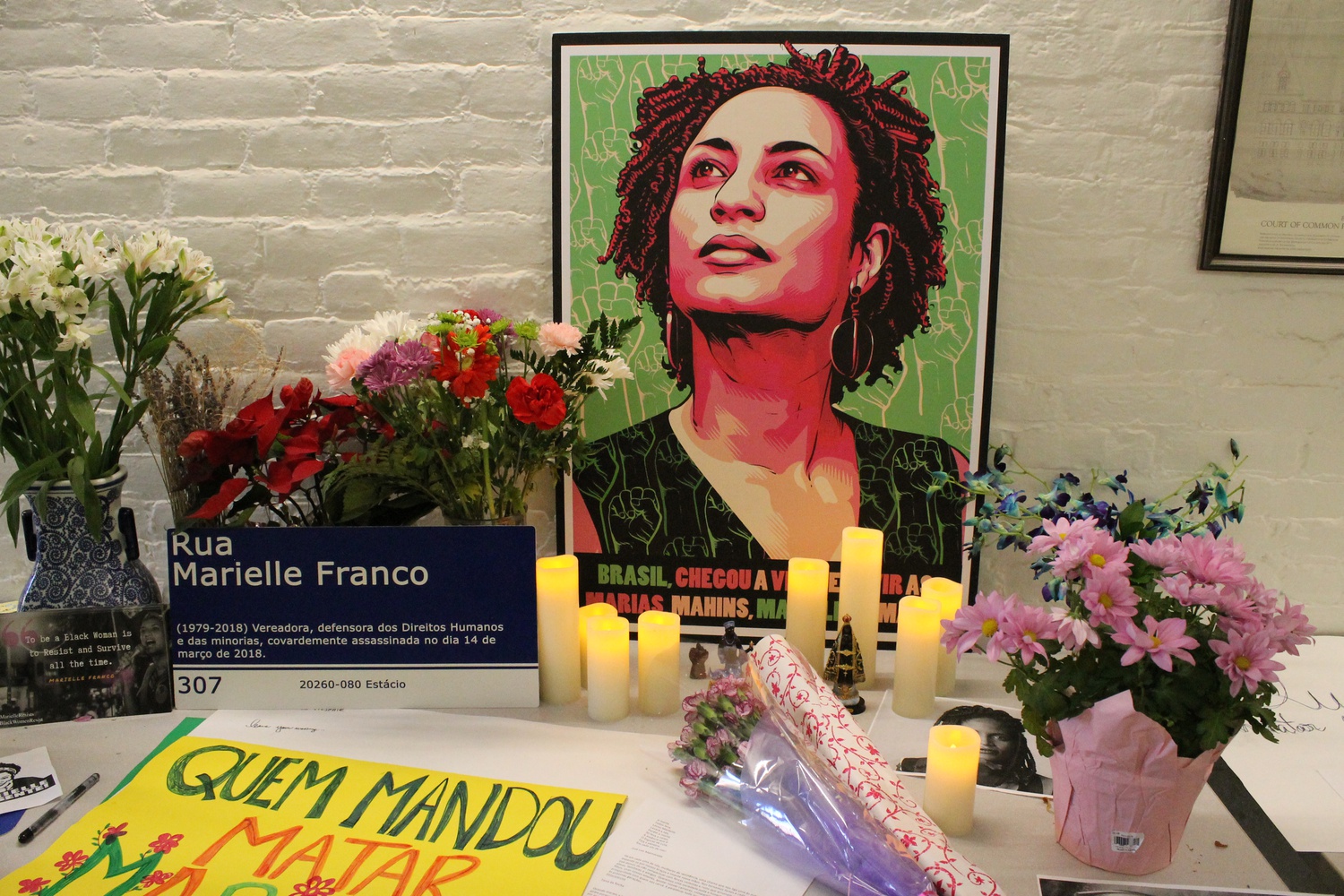 A memorial honors the one-year anniversary of Marielle Franco's killing in Brazil. Franco was a city councilor in Rio de Janeiro and an activist for women's and BGLTQ rights. By Chloe I. Yu
By Alexis K. Bolner, Crimson Staff Writer

Tuesday’s events, called “The Other Side of Violence: Marielle Franco and the Struggle for Brazilian Democracy,” commemorated the one-year anniversary of her assassination in March 2018.

Franco, a woman of African descent who “represented hopes of political renewal for countless Brazilians,” advocated for the rights of BGLTQ people and poor populations during her career, according to a poster publicizing Tuesday’s events. News reports following her March 14, 2018 killing suggested she was assisinated for her criticism of police violence in Rio de Janeiro's poor neighborhoods.

The demonstrators stood in a circle outside Memorial Church, paying tribute to Franco with posters, bouquets of flowers, poems, and short speeches about her legacy.

After the demonstration, Mariana Cavalcanti, an anthropology and political studies professor at the State University of Rio de Janeiro, and Geri Augusto, professor of international and public affairs and Africana studies at Brown University, spoke to approximately 40 attendees in Robinson Hall about Franco’s accomplishments as a politician and activist.

Eduarda Araujo, a first-year graduate student in African and African American Studies who organized Tuesday’s events, said she thought it was important to honor Franco because the she was a “symbol of hope” in Brazil. She said Franco’s death represented “the beginning of the end of Brazilian democracy.”

“I think it’s symbolic because Marielle’s struggle was a struggle for black women to have a right to live, a right to produce knowledge, to be respected while doing so, to live with dignity, to have their reproductive rights respected, and for queer people to have the right to live and live as they want,” she said.

Cavalcanti also praised Franco’s activism on behalf of black women during her presentation, including her efforts to provide women with access to legal abortions and increase the availability of healthcare.

“She brought many black women into spaces formerly denied to them,” Cavalcanti said. “Most of her projects attempted to build a better city for women.”

At the end of the presentation, Cavalcanti repeated the words that Franco’s closest friends spoke after her death.

“In killing her they buried a seed. She may be gone, but since she never walked alone, there are not enough bullets to kill her life’s work.”

A previous version of this article misspelled Geri Augusto's name.