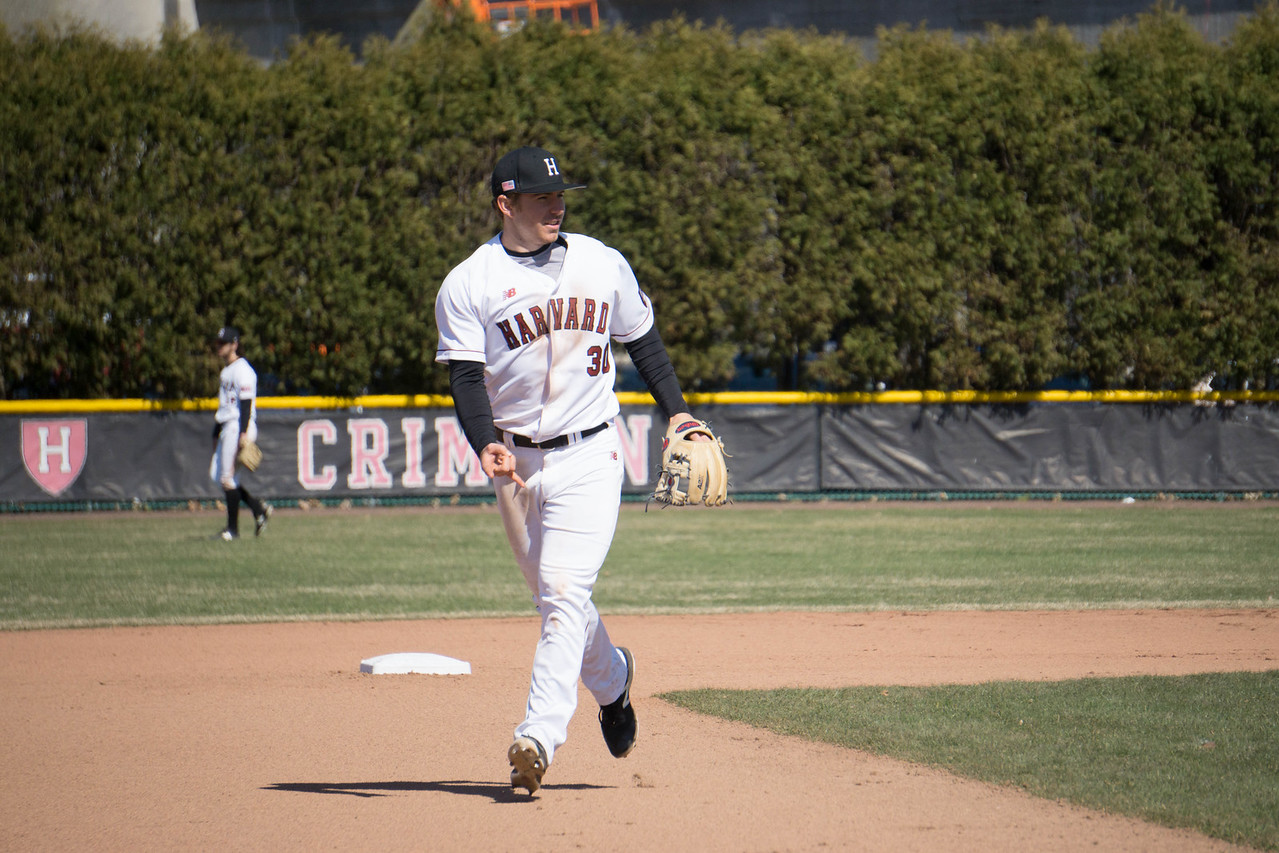 Junior Hunter Bigge jogs back to the infield during a Harvard game against Penn last year. The Crimson beat the Quakers in this year's series against Penn, 2-1. By Allison G. Lee
By Jackson Delgado, Crimson Staff Writer

It was the top of the eighth inning in a tied game, the third of a tied series, when junior outfielder Jake Suddleson stepped into the batter’s box. With the bases juiced, Suddleson was poised to drive in a run or two and finally break the stalemate. He drove in four.

“It was a 4-4 game and we were scrapping away,” said senior pitcher Ian Miller. “We needed that one hit to get us over the edge. Jake really came through for us and hit an opposite field grand slam. His energy going around the bases was infectious — it really picked us up. It was great.”

“Jake Suddleson’s grand slam was one of the more exciting baseball moments I’ve ever had in my life,” added senior first baseman Patrick McColl. “The whole dugout was going crazy.”

The grand slam marked Suddleson’s fifth home run of the season, and was emblematic of the Crimson’s (10-5, 2-1 Ivy) offensive attack in this weekend’s three high-scoring contests against the Quakers (11-6, 1-2). Suddleson hit two home runs and two doubles in the series, McColl hit two homers and three doubles, and senior infielder and team captain Chase Aldridge contributed a homer and a double as well.

“Going up to the plate, our whole team has a lot of confidence right now,” commented McColl, whose home run in the fourth inning of Sunday’s game tied the contest at four runs apiece. “We’re aggressive swinging the bat — we don’t walk a whole lot but we get a ton of hits. I think it’s very contagious. We knew that it was going to be an offensive day in a hitter-friendly park.”

McColl himself continued a hot start to the season. He extended a multi-hit streak to six straight games, and holds the highest batting average in the country at .515. He is also tied with Suddleson with 22 RBI’s on the season, leading the team, and was named Ivy League player of the week. Nonetheless, he was nonchalant about his recent success at the plate.

“You just do everything you can,” the Los Altos, Calif., native said. “Baseball’s a game where sometimes you get lucky, and sometimes you get unlucky. I’ve been feeling good at the plate, being aggressive, and getting good pitches to hit. It’s been working so far — hopefully I’ll be able to keep it up.”

On Saturday, the Crimson played a windy, high-scoring doubleheader against the Quakers, taking the first game 12-9 but dropping the second game 16-12.

“We did a really good job coming out with energy in the first game,” Miller said. “Everyone was super excited to play.”

“It was nice to get into the Ivy League season — this ups the ante a little bit and makes the games more intense,” McColl said. “Saturday was a crazy day — the wind was blowing super hard, which pushed up the scores and home runs in the two games. For the first game we were able to come out on top in a slugfest, but in the second game we came out a little flatter and Penn was able to take it.”

The focus of the weekend, though, was the Sunday matchup that decided the series.

“Sunday was a super fun baseball day,” McColl said. “It was a really intense game.”

Miller was able to control the Quaker offense from the bump. He pitched 7.1 innings and collected his second win of the young season.

“I was just trying to throw strikes and keep the ball down,” the Brooklyn, N.Y., native had to say. “I tried to use their aggression to my advantage. The ball was traveling like crazy this weekend, and they’d been doing a really good job elevating the ball into the wind. I was trying to keep the ball on the ground as much as possible.”

Miller also credited the Crimson infield with solid defensive play to back him up.

“My infield did a fantastic job turning two and making the plays behind me,” he offered, “so I was able to lean on them.”

All in all, the weekend provided the Harvard squad with an encouraging start to Ivy League play.

“Penn is a great team, so we knew that it was going to be a challenge,” Miller said. “But we also knew that if we came out and made a statement this weekend, we were going to be in a great position going forward. We feel really good about the rest of the Ivy League season having won on the road against a really good team.”

“We’re pretty confident going into this next series,” McColl added. “We’re going to try to win as many as we can, but we just focus on one game at a time.”

Harvard takes on Holy Cross in a non-conference contest on Tuesday before facing Princeton over the weekend. Both matchups will be at home on O’Donnell Field.