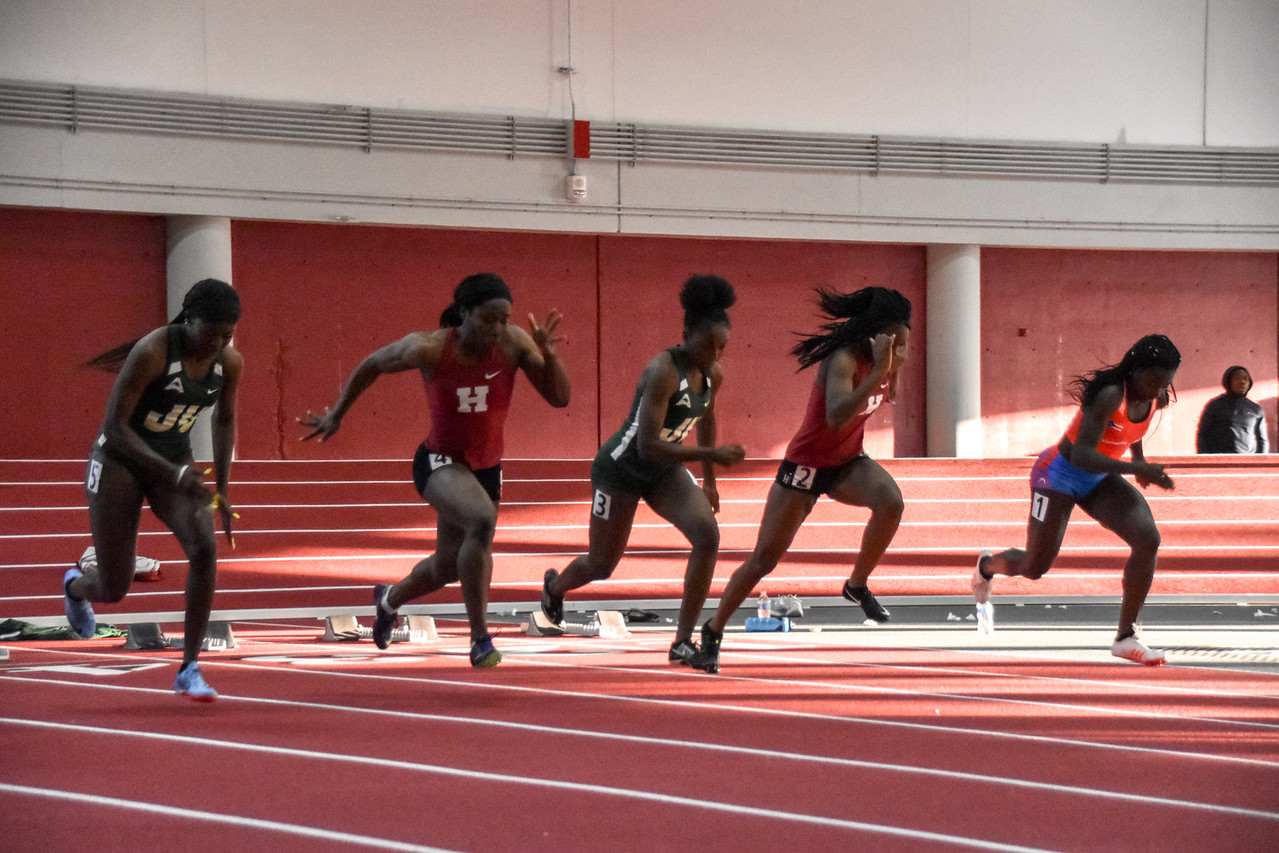 One of the oldest rivalries in the country once again did not fail to disappoint. Records were broken and personal bests were demolished. The Harvard/Yale meet has been going on for over a century, and both the men’s and women’s team continued the Crimson’s domination over the Bulldogs in the all-time series by coming away with a victory this year.

The meet also serves as an HYOC qualification meet. Athletes who hit the standard times and marks will be able to go to England and compete against the Oxford and Cambridge teams this summer.

“Me and all my teammates went in to the meet with our number one priority to beat Yale since the rivalry is historical and the duel meet is one of the oldest meets in the country” said freshman thrower and jumper John Minicus. “We also came in knowing that the winners of each event would qualify for a Europe trip over the summer, so everyone was super competitive.”

Despite competing in this historic meet for the first time, freshmen athletes demonstrated their talent and composure with some outstanding performances. Freshman pole vaulter Alana Carroll came away with a victory with a mark of 4.01m. Her performance broke the Harvard record in the women’s pole vault.

Freshman jumper Kyle Murphy won both the men’s triple and long jump with marks of 14.91m and 7.23m respectively.

Freshmen throwers John Minicus and Sam Welsh also had commanding victories in three different events. Minicus won the javelin by over nine meters with a mark of 54.33m. Welsh dominated the shot put and the discus winning these events with marks of 15.6m and 51.48m respectively.

“I was pretty excited with the win because it scored a lot of points for the team, and a lot of the team came out and supported the javelin throwers” said Minicus. “I still have a lot to work on and there will be some tough competition to face soon, so now I am looking forward to working on some form issues to hopefully get some further distances before championships”

Preparation was key for these freshmen athletes to excel in a historically competitive meet that such high stakes.

“To prepare for the javelin and my other events, I worked hard in the first half of the week with some tough workouts” said Minicus. “I then tapered off in the second half of the week, fine tuning my technique and making sure I was rested for Saturday”.

Other notable performances came from the Crimson’s sprinters and middle distance runners. The women swept the 200m with sophomore Olivia Okoli, freshman Tina Martin, and junior Micah Meekins coming in with times of 24.22, 24.29, and 24.35 respectively. On the men’s side, sophomore sprinter Jovahn Williamson also won the 200m with a time 21.37, while senior co-captain middle distance runner Myles Marshall won the 800m with a time of 1:52.68.

“The team knew that we wanted to go down there and take care of business” said Marshall. “The HY meet is a historic meet and so one we take seriously. For me preparing for the 800 meant finding a way to get the win and the points to best set up everyone else to get the team win.”

Harvard also dominated the hurdles and jumps, even sweeping several events. The men’s team got 1-2 in the 110m hurdles with freshman Tre Hollingsworth and senior Andrew Bolze having times 14.71 and 14.88 respectively. Meanwhile, the women swept the event with freshman Jada Jones taking the victory with a time of 13.96, while juniors Livia Gauntlett and Karina Joiner followed closely behind with times of 13.98 and 14.05.

In the 400m hurdles, junior Maya Miklos got fifth all-time with a time of 59.11, while junior Jacob Mclennan won the men’s race with a time of 53.21. Erick Duffey managed to set a new personal record in the pole vault with a mark of 5.41m.

“This meet was really good for a lot of our team and definitely boosted our spirits, giving us confidence that we will do well at Heps” said Minicus. “Specifically our pole vaulters had huge days and PRs, which I know hyped up the team a lot. I think we are in a really good position heading into our last regular season meet this weekend and then Heps in three weekends, and I am excited to see my teammates exceed expectations in the following weeks.”