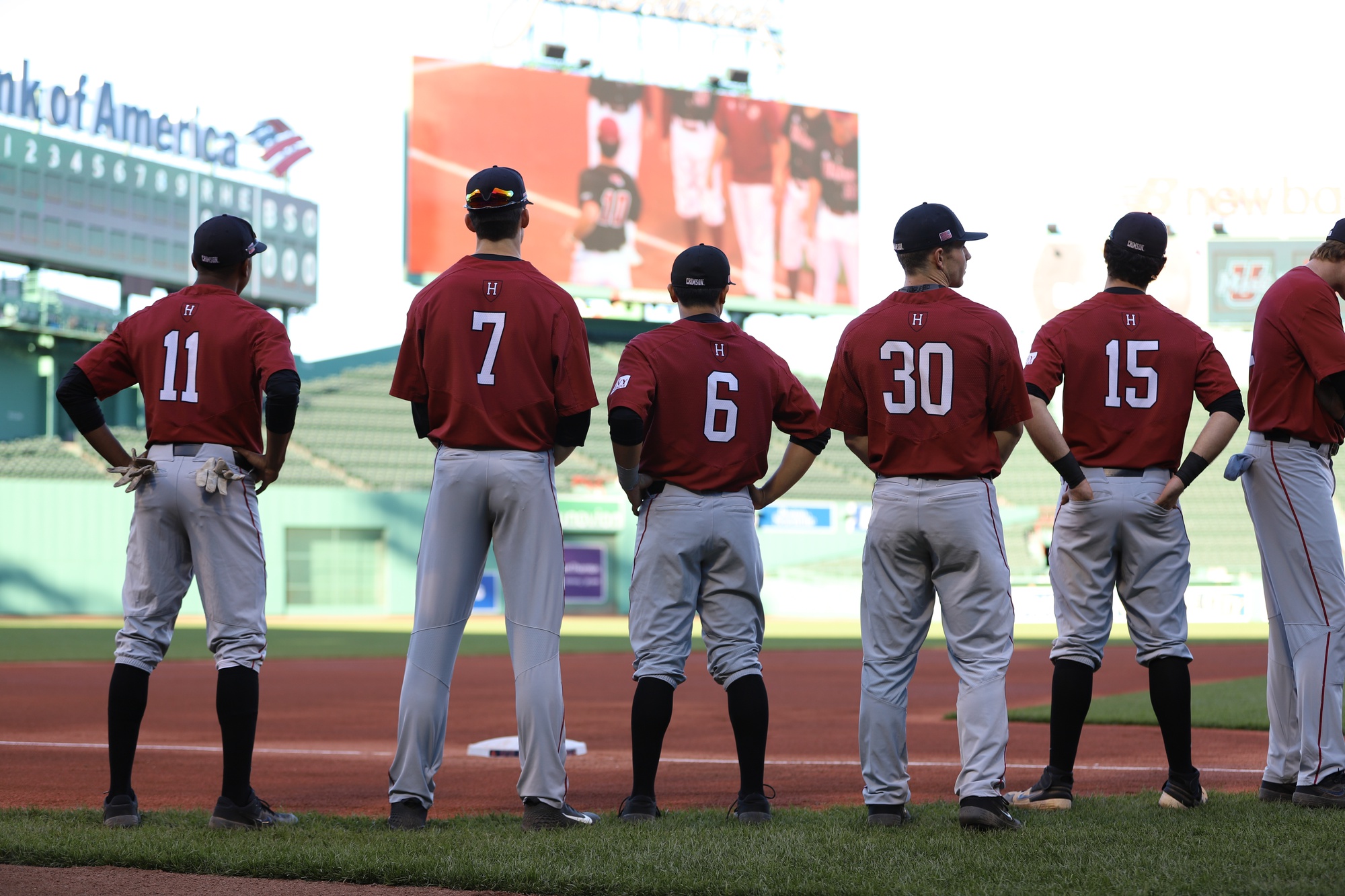 Senior first baseman Patrick McColl blasted a home run in the top of the first inning, but the Crimson could not take home the victory. By Quinn G. Perini
By Jackson Delgado and Amir Mamdani, Crimson Staff Writers

When Kieran Shaw toed the rubber in the bottom of the ninth inning at Fenway Park, Harvard baseball seemed poised to make history. With the Crimson holding a narrow 9-8 lead over UMass in a nail-biting game, Shaw was three outs from securing both the Crimson’s first ever back-to-back Beanpot titles and the single-season record for most saves by an Ivy League pitcher.

But in a heartbreakingly cruel twist of fate, the Minutemen stormed back in the bottom of the ninth inning to win 10-9. The bottom of the ninth began with a ringing double into the left field corner, and a costly wild pitch moved the runner to third, bringing the infield in. A chopper that might have otherwise been fielded made it through the drawn-in infield, scoring one and tying the game at nine runs apiece.

With their backs against the walls, Harvard faltered, despite playing sparkling defense all night. The defense failed to record an out on an attempted sacrifice bunt that bizarrely deflected off of catcher Matt Thomas’ mask, setting the stage for a successful sacrifice on the next at bat. After an intentional walk to load the bases and set up a potential force out at the plate or a double-play, pinch-hitter Logan Greene hit a walk-off fly ball to center field.

The Crimson (18-9, 8-4 Ivy) sought to repeat as Beanpot Champions for the first time in program history, but were ultimately doomed by ineffective pitching throughout the ballgame. Without a formal starter, Coach Bill Decker was forced to go to eight different relievers, and was ultimately unable to find the right combination to defeat UMass (11-18, 5-7 Atlantic-10).

Harvard turned to many of the bullpen arms to take the mound in tonight’s contest, not wanting to disrupt the rotation for Ivy League play this coming weekend. Sophomore Enzo Stefanoni made his 11th appearance on the bump for the Crimson in what was his first start of the season.

If there were any early nerves for Darien, Conn., native, they didn’t show, as he struck out the first batter he faced, Minutemen leadoff man Collin Shapiro. Stefanoni added another strikeout as he sat down cleanup hitter Anthony Videtto to finish out a clean first frame.

With solid defensive play from junior shortstop Chad Minato, Stefanoni was also able to emerge from the second inning unscathed. The third inning, though, was not as kind to the product of Rye Country Day, as he allowed four consecutive base hits, cutting the Crimson lead to one run. While two of the hits were of the infield variety, the others were smashed into the right-center field gap for extra bases.

The next to enter the fray for Harvard was senior Jake Forte. Forte, one of the most unique stories on the team, transitioned this season from the field to the mound, featuring an unconventional three-quarters delivery. He had some trouble with command, though, and hit two batters in his second inning of work, loading the bases and bringing freshman Harrison Stovern out to the mound from the pen.

With a full count and facing the cleanup hitter, Stovern painted the inside corner with a fastball for a called strike three — controlling the damage and ending the inning. This clutch strikeout set the stage for a four-run fifth inning that gave Harvard a lead it would only cede in the bottom of the ninth. 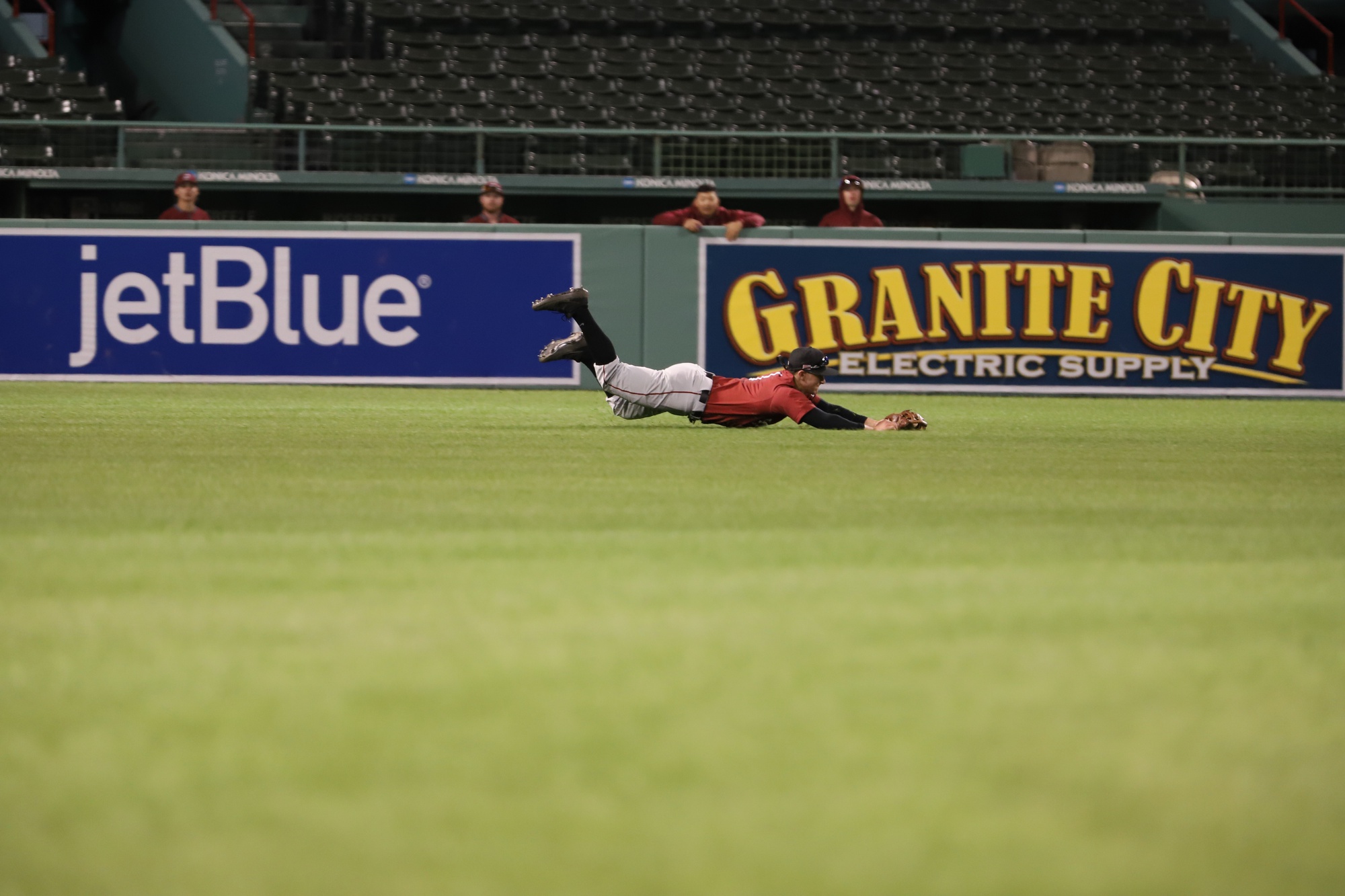 Outfielder Ben Skinner made a diving catch to add to his defensive highlights this season. By Quinn G. Perini

The bullpen’s struggles overshadowed what was an otherwise standout performance from an offensive perfective, for both Harvard and UMass. Tonight’s contest was a slugfest compared to the Crimson’s semifinal matchup against Northeastern, a game in which there were just seven runs and three hits recorded by the two teams combined. When the dust had settled at the Fens, the two teams today had combined for a whopping 29 hits and 19 runs.

Harvard’s offensive tear started with two outs in the top of the first inning, when senior first baseman Patrick McColl wrapped a solo home run past the Pesky Pole in right field, channeling the spirit of David Ortiz and other Red Sox greats. McColl’s drive was the latest in a series of clutch offensive contributions this season that has helped the Crimson to second place in the Ancient Eight standings. The senior added an RBI single in the sixth to extend the lead to 8-5.

The power surge continued into the top of the second as freshman Logan Bravo realized a dream of many ball-players can only hope to achieve. He hammered a two-run shot over the Green Monster, putting Harvard up 3-0. That blast made this the second straight Beanpot championship with a Crimson homer over the Monster, as then-freshman infielder Quinn Hoffman did the same just two years ago.

Bravo rung a double off of the top of the Monster in the top of the seventh inning, to help extend the Harvard lead to four runs. His 2-for-4 performance, including a pair of extra-base hits and three RBI’s, was critical out of the No. 8 spot in the lineup.

UMass relief pitcher Brad Collins struggled to get through the middle of the order in the fifth inning, and was hurt greatly by a series of defensive errors that resulted in four total runs, three of which were unearned.

The turning point in the top of the fifth came with the bases loaded and one out, when catcher Deven Peterson hit a hard ground ball towards second baseman Eddy Hart, a picture perfect double play ball. Instead of causing a double play to end the inning, the grounder skipped through Hart’s legs, allowing an additional two runs to score.

The Minutemen would not go down without a fight, however, as a three-run seventh inning cut the Crimson lead to just one run. While Harvard mounted a rally in the top of this deliberate frame, UMass responded with a hit parade of their own. Coach Decker was forced to use three pitchers to record three outs, with the inning mercifully ending with Harvard still in front, if only for another inning.

The seventh inning expended many of Coach Decker’s high-leverage relievers, forcing Shaw to enter an inning earlier than Coach Decker might have otherwise wanted. The Los Gatos, Calif., native had previously recorded a two-inning save, but might have fatigued slightly over the taxing 36-pitch performance.

Wednesday’s game moved at a pace usually reserved for Fenway’s more frequently attended draws between the New York Yankees and the Boston Red Sox. With a first pitch at 6:03pm, the contest lasted well over four hours, ironically overlapping with a matchup played at Yankee Stadium between the two Major League Baseball foes.

When the final pitch had been thrown, Harvard was left rueing its opportunity to close out the game, and must turn its attention to qualifying for the Ivy League Championship series, one of the only consolations that might ease the memory of tonight’s Beanpot Championship.