Harvard's Crew Teams Heat Up As Postseason Races Near 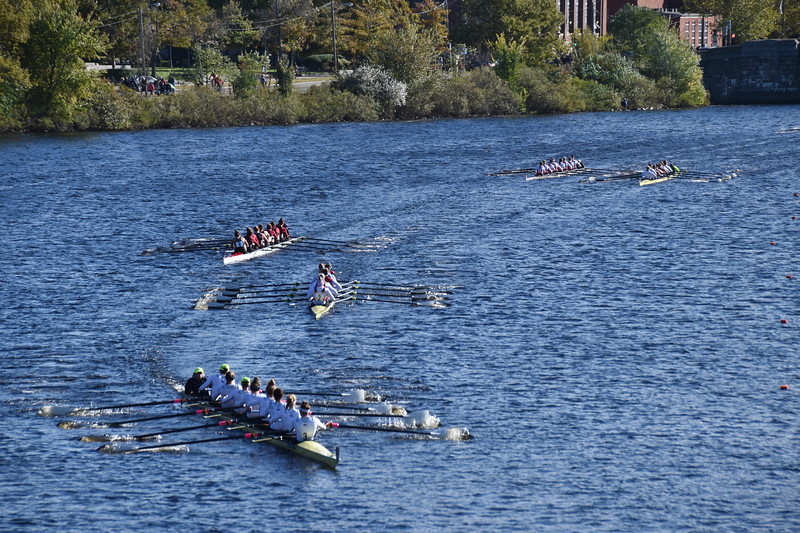 Harvard’s crew teams continued to surge, heating up with the spring weather as the spring season progresses towards its nearing culmination. By Quinn G. Perini
By Leon K. Yang, Crimson Staff Writer

Over the past two weeks, all four of the Crimson’s crews took to the water to partake in tenacious battles of physical exertion and mental fortitude. Through high tides and low tides, all displayed a competitiveness indicative of the immense training that has propelled them to the solid teams they are today. With the large regattas of the postseason looming near, the warmer weather signals the heating up of this spring’s competition.

The No. 3 men’s heavyweight team displayed its prowess on the water this weekend. The crew traveled to northeast Princeton, N.J., where it settled down to compete on Lake Carnegie of the Millstone River for the Compton Cup.

From the very beginning, Harvard’s 1V took a comfortable lead, which it maintained for the entire race. The boat crossed the line in 5:25.3, a margin of victory of seven seconds over the Tigers. The Crimson also took the second and fifth varsity eight. The victory in the 1V was Harvard’s 11th in the past 13th contests.

“Princeton is a tough opponent; they’re generally a strong team all the way through,” Corrigan said. “Speaking for the 1V, which is the race that decides the Compton Cup, we just got a really good rhythm really early in the race; we beat them by seven seconds and I think set the course record, so we felt pretty happy with that.”

Last week, the Crimson suppressed a late surge by No. 5 Brown to take the Stein Cup on the Charles River. Harvard took the first, third, and fourth varsity eights. The 1V finished in 5:45.3 to Brown’s 5:46.6.

“You’re always giving your max effort, but sometimes you’re not working as efficiently and that was one of those races where we were all going pretty hard, and going for it, but we weren’t working very efficiently, and we weren’t able to move smoothly and get as much of a lead on them in any point of the race,” Corrigan said. “With Princeton we were able to work efficiently and very hard at the same time, and it’s a lot more fun and boats go faster when that happens.”

The No. 4 men’s lightweight crew dominated the Charles River in the Haines Cup. Blustery winds did not impede Harvard from besting both No. 7 Navy and Delaware in three races, the 1V, 2V, and 4V. The team’s victory in the 1V secured the Cup. The Crimson’s boat outlasted Navy by just over a second in 6:20.38; Delaware finished more than seven seconds behind.

Last weekend, Harvard traveled to Dartmouth to face the Big Green in the Biglin Bowl. Coming in to the race, the Crimson had not ceded a victory in the regatta since 2009. This year’s match-up proved no different, as Harvard took both the 1V and 2V/3V races, including a 5:28.4 finish in the 1V, six seconds ahead of the Big Green.

Senior Jack Stone, who coxed the 1V in both races, noted that the Navy race showcased the team’s depth and also praised the crew’s efforts against Dartmouth in a race that was delayed a couple of hours due to the mist.

“This team so far has had a successful dual season, but we also realize that we lost our first race and that no one is just going to be giving away their shirts or giving away their medals at Sprints of the IRAs this year,” Stone said. “We know it’s a very competitive league and we already have two teams that have beaten us, so we’re really hungry to compete and ready to prove ourselves.”

The No. 15 Radcliffe heavyweight team was also in action this weekend and traveled to Providence, R.I., to face No. 8 Brown on the Seekonk River. Conditions were subpar, with winds up to 15 miles per hour. The Bears bested the Black and White in the 1V with a time of 7:09.40. Radcliffe did secure a victory in the B4/C4 race with a seven second margin of victory.

The No. 4 Radcliffe lightweight crew did not take to the water this weekend after a flurry of races last week at the Knecht Cup, which took place on the Cooper River in Cherry Hill, N.J. The Black and White sent four boats to the Grand Finals on that Sunday. In the varsity quad, Radcliffe took second to UMass in 7:37.80. The crew took fourth in the lightweight four and lightweight eight grand final events, which were won by Princeton and Stanford, respectively. In the varsity eight, Radcliffe took sixth; Stanford won in 6:39.23.

Moving forward, Corrigan noted that it is imperative that his team does not become complacent in preparation for races against tougher opponents moving forward, including Yale, Washington, and Cal. His crew, along with the other three, has its sights both on the Harvard-Yale race and the National Championships at the end of the season.

“You show up to these races against Brown and Princeton and Cornell and you want to win and you hope to win, and coming away with a win is good, but for instance next week Yale is racing Princeton and you can compare the margins across weeks,” Corrigan said. “We won by seven seconds; did Yale win by eight?”

—Staff writer Leon Yang can be reached at leon.yang@thecrimson.com