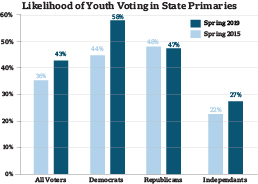 The spring 2019 Harvard Institute of Politics Youth Poll found that voters between the ages of 18 and 29 are experiencing anxiety and have increasingly voiced concern about the moral direction of the United States.

Conducted by the Harvard Public Opinion Project, the biannual poll surveyed more than 3,000 individuals nationwide. The survey also revealed that the youth vote will likely play a significant role in the 2020 presidential election.

While the poll did not find a significant link between anxiety and partisan affiliation, anxiety was correlated to views about the nation’s civic health. Forty-eight percent of young Americans — irrespective of political affiliation — reporting having experienced anxiety within the 24 hour period before the poll was conducted. Fifty-nine percent of respondents who strongly agreed that “politics today are no longer able to meet the challenges our country is facing” reported experiencing anxiety. Only 29 percent who strongly disagreed with that statement experienced anxiety.

John Della Volpe, the IOP's director of polling, said in a press release about the fnidings that candidates need to better understand the stress and anxiety that young voters face in order to connect with them.

“It is no secret that social media has exacerbated the stress and anxiety that is already so prevalent in the late-teen and early-adulthood years of young Americans,” Della Volpe said in the press release. “However, for the first time, we now have evidence that the state of our politics is contributing to the mental health challenges millions of young Americans already face.”

In addition to high rates of anxiety, the poll found that young Americans are worried about the deteriorating moral state of the nation.

“We can watch that concern over the country’s morals trending steadily upward since this point in 2015,” Richard M. Sweeney ’21, student chair of the Harvard Public Opinion Project, said in interview following the results' release.

Sweeney also said he was surprised to find that near-equal percentages of Democrats and Republicans agreed with the statement “I am concerned about the moral direction of the country,” with 66 percent and 64 percent agreement respectively.

“What did surprise me was that when you broke this down by party, this concern is relatively broad based – it cuts across party lines,” Sweeney said. “Young people of all stripes are really looking for leaders that can bring morality back to Washington.”

Della Volpe said in an interview that another key finding was the tension that appears to exist between young voters and baby boomers, which survey organizers defined as people ages 55 to 73. Only 18 percent of survey respondents agreed that voters within the baby-boom cohort care about people like them.

One of the issues that may contribute to this generational conflict is environmental policy, according to Della Volpe. Forty-six percent of respondents agreed that the government should be more proactive in curbing the effects of climate change, even at the expense of economic growth – a substantial increase over previous years’ findings.

“Protecting the environment – dealing with climate change – is now central to both the domestic and well as the foreign policy agenda of young Americans,” Della Volpe said.

IOP Director Mark D. Gearan ’78 said in the press release that the results of the youth poll – and the voices of youth voters – should inform the actions of candidates in the upcoming presidential election.

“This presidential election serves as a consequential moment in time to shape how young Americans engage in politics and I hope candidates thoughtfully listen and engage with their agenda,” Gearan said.