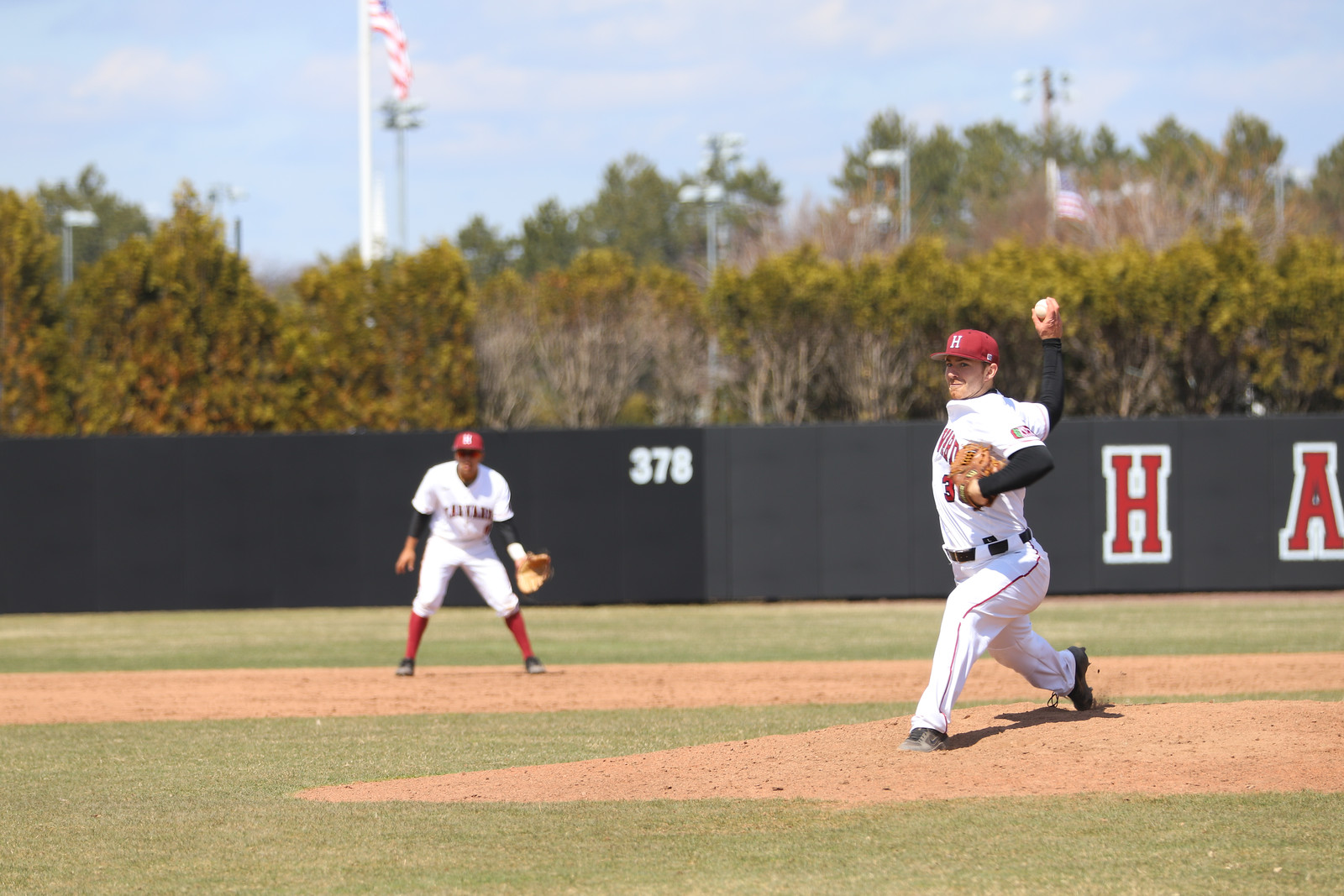 Junior Hunter Bigge has excelled as a two-way player for the Crimson this season. The righty has compiled a 5-1 record on the mound, and a .291 average at the plate By Quinn G. Perini
By Jackson Delgado, Crimson Staff Writer

It was the bottom of the 14th inning in a 9-9 game against Columbia (17-19, 12-6 Ivy) when junior outfielder Jake Suddleson stepped up to the plate. After five straight scoreless innings, and with senior first baseman Patrick McColl on base, Suddleson was poised to break the tie and take home the win for the Crimson (23-11, 12-6).

And with one swing of the bat, that’s what he did.

“It was crazy,” McColl said. “It was pretty awesome for Jake to come in clutch like that at home.”

A line drive almost to the wall in the right-center gap sent McColl sprinting around the bases from first and sliding into the plate with the throw just a bit late.

“When he hit the ball, I turned and looked to make sure that no one was going to get to it,” commented McColl, the Los Altos, Calif., native. “As soon as I made that decision, I took off and there was no way that I was stopping.”

As the team stormed out of the dugout to mob Suddleson at second base, he threw up both hands in euphoria.

“As soon as I scored, I think Chase Aldridge was there at home, and we took off running towards left field,” added McColl, who also currently boasts the second best batting average in the nation at .430. “The whole team ran to just chase down Jake.”

The walk-off double cemented the series victory against the Lions and capped off an overall offensive battle between the two teams. The slugfest started in the first two innings, where Columbia put up six runs and kept Harvard scoreless. Harvard put up three runs in the third, with senior outfielder Ben Skinner and junior infielder Quinn Hoffman contributing RBI extra base hits and Suddleson knocking one in with a sacrifice fly.

The Lions put up two more in the top of the sixth and seventh innings, each coming from a solo home run. In the bottom of the seventh, though, the Crimson exploded for a six run inning, led by an RBI double from McColl and home runs from sophomore catcher Matt Thomas and Suddleson himself.

Columbia retaliated with a run in the top of the eighth, tying the game at nine runs apiece. The game was kept scoreless from the ninth inning through the thirteenth due to a dominant performance from the Harvard bullpen on the mound. After senior starter Ian Miller left the contest, freshman Harrison Stovern entered and saw two and two thirds innings of work. Stovern yielded for sophomore Enzo Stefanoni, who added another two innings, after which freshman James Kirkpatrick and senior James Forte each contributed an inning.

“Once we got to extras, it was a battle to see who could last longer,” McColl said. “Our pitchers did an amazing job coming out — a bunch of great things were going on.”

On Saturday, Harvard split a doubleheader against Columbia to open the series. They dropped game one 11-9 to Columbia in another back-and-forth shootout, with extra bass hits coming from Skinner, Suddleson, freshman infielder Hunter Bigge, and senior Trent Bryan. After the tough loss, though, the team picked up a tight game two with a score of 6-4, propelled by extra base hits from Skinner, senior catcher Devan Peterson, and sophomore infielder Buddy Mrowka.

However, the focus of the weekend was on Sunday and the Crimson seniors. It was fitting that the Crimson took home the ballgame and the series in such an electric fashion, as Sunday was the team’s senior day on O’Donnell Field.

“It was definitely an emotional day for some guys,” said McColl, himself in the final season wearing a Crimson uniform. “Knowing that’s the last regulation game we seniors played on O’Donnell Field made the way we won especially memorable for us.”

The seniors were able to reflect upon what the program has meant to them over the years as they were celebrated for their commitment to Harvard Baseball. Sunday was a truly meaningful day for all involved.

“It’s been a long four years of playing baseball out on this field,” McColl offered. “For me, I was standing out on first base and just taking it all in. And to be able to score the winning run made it a day I’ll never forget.”

And as they looked in the rearview mirror, the senior ballplayers were also able to look forward at the conclusion of one of the most fruitful seasons in recent memory. Harvard moved into a tie with Columbia for first place in the Ancient Eight standings — and the series win just gave them the tiebreaker. The the final conference matchup against Brown will determine the team’s fate and chances at an Ivy League championship in which the Crimson might very well encounter the Lions again.

“This was a really big one for us,” McColl said. “It was a good series in general — all the games were tight and super intense. Hopefully this was just a precursor to what will end up being the Ivy League championship.”