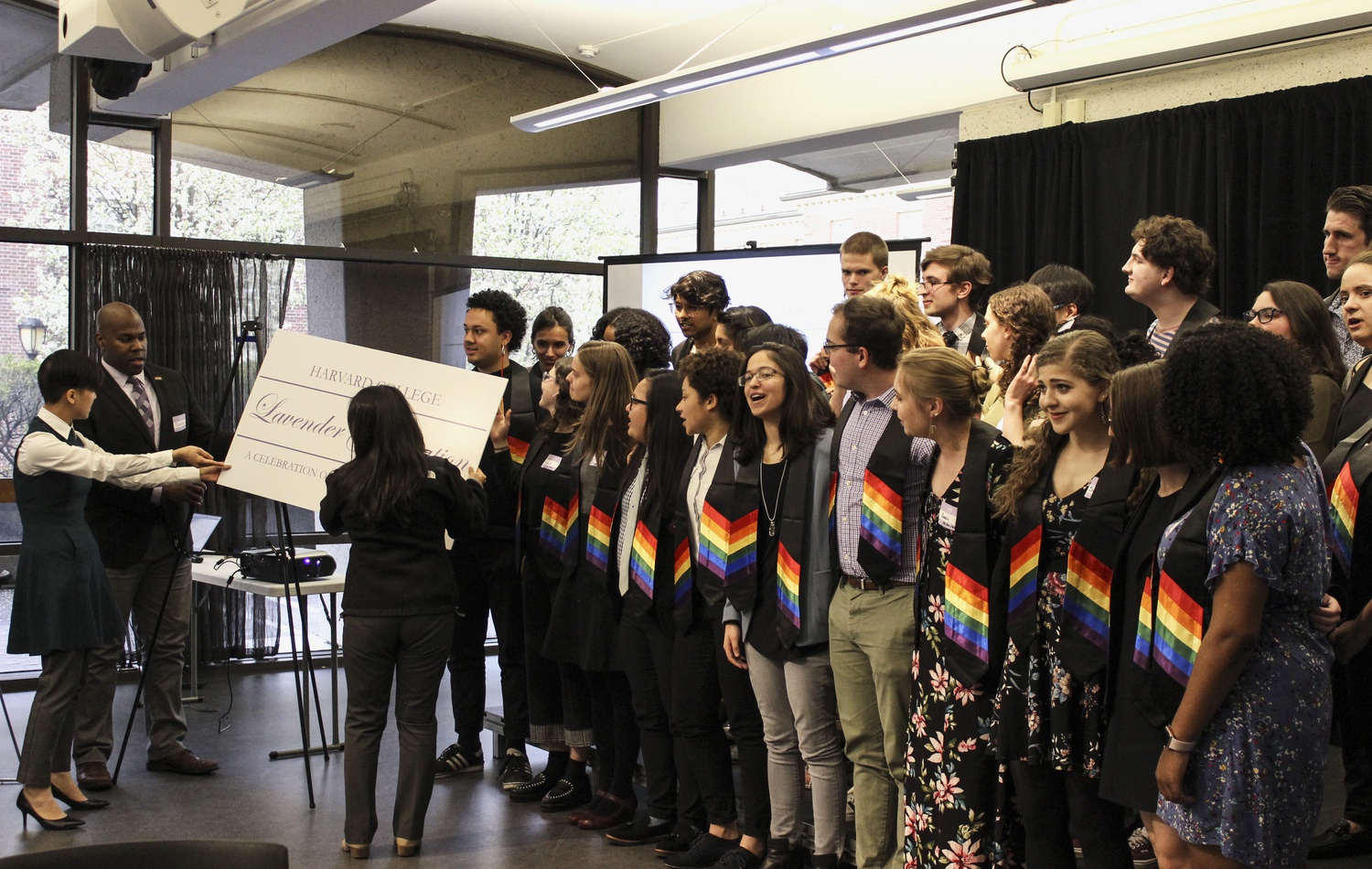 The Office of BGLTQ Student Life held the event at the Student Organization Center at Hilles, which was decorated in various purple hues — a nod to the significance of the color lavender in BGLTQ history. The ceremony marked the sixth time Harvard has hosted Lavender Graduation, which was first held in 2013.

Sheehan D. Scarborough, the director of the Office of BGLTQ Student life, opened the event with remarks about the challenges of being a BGLTQ student at the College.

Before the distribution of rainbow tassels in an official procession, Ming Li Wu ’21 performed a spoken word poem and Aisha Moodie-Mills — a resident fellow at the Institute of Politics and BGLTQ activist — delivered a speech about individuality and resilience.

“What really, really matters at the end of the day is not necessarily the tactical, but the emotional. And how you lead with passion in everything that you do, no matter what that is,” Moodie-Mills said in her remarks.

The College's annual Lavender Graduation honors BGLTQ seniors as they prepare for University-wide graduation at the end of May. By Sanjana S. Ramrajvel

Though Lavender Graduation only began at Harvard six years ago, colleges and universities nationwide have held the ceremony since 1995, when it was first held at the University of Michigan. The event has expanded significantly since its inception at Harvard, Scarborough said in an interview before the event.

“There were only about ten to 15 students who participated [in 2013],” he said. “We’re at about 60 students participating in Lavender Graduation in some way or another this year. So, it’s just growing every year.”

Harvard Gender and Sexuality Caucus President Kamille D. Washington ’10 conducted the ceremony, praising the growth of the event and support services for BGLTQ students since her graduation from the College.

“We have been so excited at the HGSC to see how this event has grown,” Washington said in an interview before the event. “For me, when I graduated in 2010, there was no Office of BGLTQ Life when I graduated so it’s really heartwarming to see this program exists.”

Amelia M. Lamp ’19 and Luke. A. Martinez ’19, who participated in Lavender Graduation, said they appreciated the continued tradition of ceremony at Harvard to cap their college careers.

“This is really cool for me, because I wasn’t totally out most of my college career,” Lamp said. “Doing this was really nice because it is finally kind of experiencing the queer community. It’s great to hang out with lovely and supportive people.”

“This is just a wonderful installment in the life of the Harvard queer community,” Martinez said. “I hope people take this as an invitation to do more.”