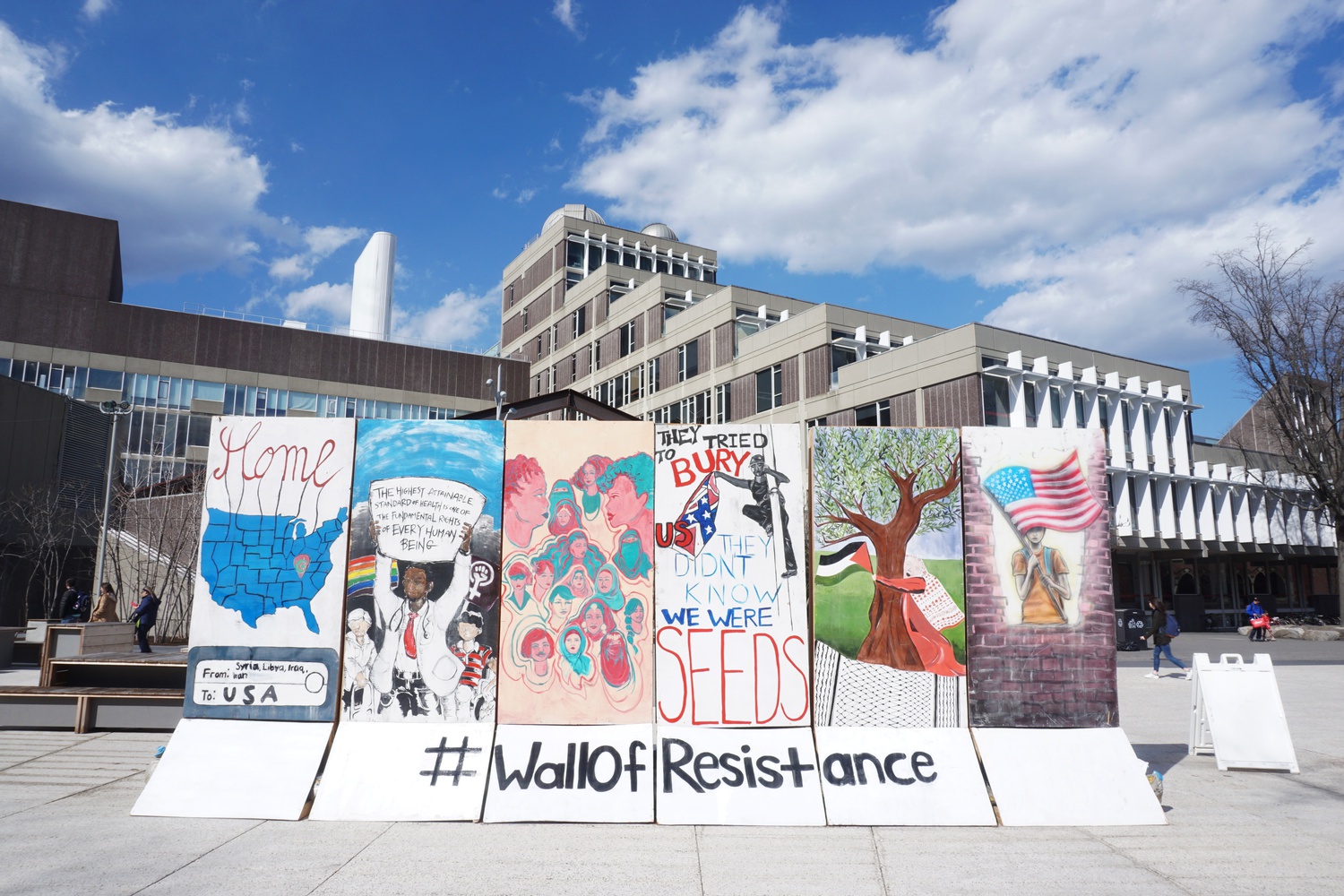 The Wall of Resistance, co-sponsored by various organizations on campus, was unveiled on Wednesday. Students who contributed to the wall said they hope to raise awareness of the struggles that different communities face daily. By MyeongSeo Kim
By Kevin R. Chen and Laura C. Espinoza, Crimson Staff Writers

Students at the College, Harvard School of Public Health, Lesley University, and other area schools built and painted the wall, which students first designed and constructed in 2017. Activists have displayed the Wall of Resistance during Israeli Apartheid Week — which includes speakers and performances designed to raise awareness for what PSC calls Palestinians’ unfair treatment by Israelis — for each of the last two years.

PSC leaders said hope the wall will connect campus affinity and service organizations by using the physical barrier to identify “common struggles” that affect various groups, according to Co-President Christian B. Tabash ’21.

“The purpose of the wall is to connect diverse struggles of different groups through a common theme of resistance to oppression,” he said.

The six-panel wall features designs on “racial discrimination, mass incarceration, immigration and undocumented issues, sex inequality, police brutality, and the occupation of Palestine,” according to a sign posted near the installation.

“This woman hanging on is sort of symbolic of her own resistance to the occupation, her own testament to her struggle, and her resistance and her attachment to the land,” she said.

Act on a Dream Co-President Diego Navarrete ’21 said in an interview before the event that his organization chose to co-sponsor the installation because of the parallels that members see between the Trump administration’s proposed border wall between the United States and Mexico and the Israeli West Bank barrier.

Some Israelis argue the barrier provides protection against what they see as a terrorist threat from the West Bank, while some Palestinians argue the barrier, which they say limits their mobility, creates conditions that mirror apartheid.

Many students who spoke on behalf of their organizations said they think their own struggles parallel the issues that Palestinians face.

“We also recognize that our struggles are metaphorically and tangibly connected,” said Maha J. Al-Suwaidi ’19, the vice president of the Society of Arab Students, a co-sponsor of the wall. “Our struggles are yours, and yours are our own.”

Representatives from other groups said they think the wall is an apt symbol.

“Walls are inherently oppressive,” Fuerza Latina Co-President Yasenimary Velazquez Carrasquillo ’21 said. “They serve to separate and divide and tear people apart. They pit groups against each other. Not only that, but they also dehumanize and ostracize people.”

While members of some student groups said they support the wall and view it as a statement of solidarity with Palestine, others have found organizations’ co-sponsorships of the wall “troubling,” according to Harvard Hillel President Rebecca Thau ’20.

“I’ve gotten several messages, actually, from students not knowing that a group they were a part of decided to co-sponsor things,” she said. “Some of those groups have said, ‘We’re not co-sponsoring the whole week; we’re co-sponsoring the wall, which is separate from the week.’”

Thau said that while some students might see a distinction between co-sponsoring the wall and co-sponsoring Israeli Apartheid Week, others may not. She added that while Hillel generally endorses dialogue for peace-building in Israel, some discussions are “outside of the scope of what counts for us as a productive conversation.”

“We generally feel that Israeli Apartheid Week is a series of events that does not characterize the nuance and difficult political situation that is happening in Israel,” Thau said.

In a statement submitted by PSC to the Undergraduate Council Sunday, group members defended their use of the word “apartheid” to describe the Israeli treatment of Palestinians, arguing that the term accurately applies to the political situation in Israel.

The wall installation will remain in the Science Center Plaza until Saturday.

A previous version of this article referred to Maha Al-Suwaidi as a member of the Society of Arab Students. To clarify, Al-Suwaidi is the vice president of the organization.