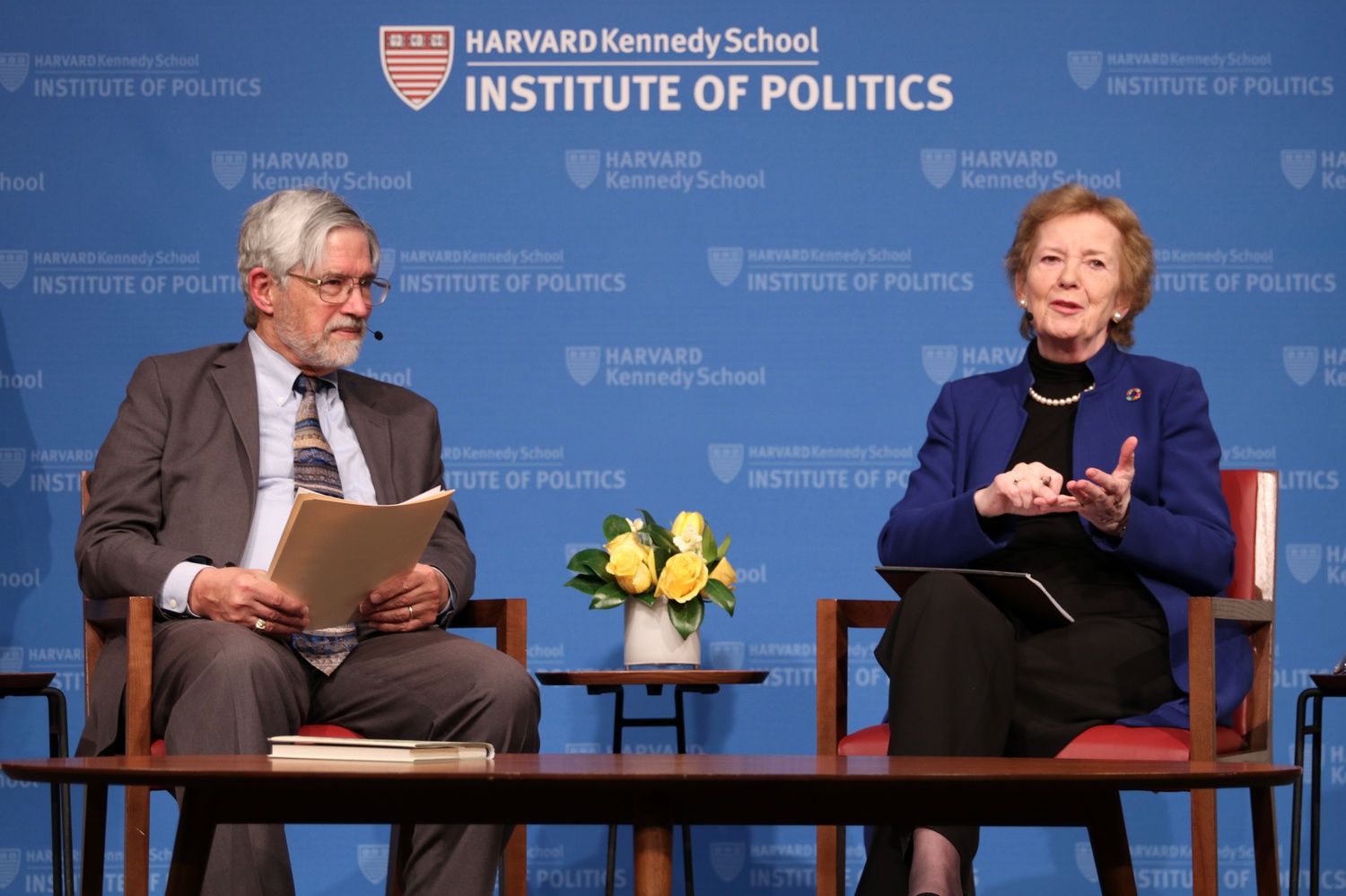 Former President of Ireland Mary Robinson discussed the intersections of the science of climate change, feminism, and climate justice at a Harvard Institute of Politics event Tuesday evening.

Professor of Environmental Science and Policy John P. Holdren moderated the conversation, beginning with a brief synopsis of current scientific perspectives on climate change, arguing that there is a spectrum of options for mitigating its effects.

Holdren asked Robinson — who started a foundation to educate people around the world about climate justice — to explain how she came to understand the “multiple justice dimensions” of climate change.

“I was a very slow learner, if you like,” Robinson said. “I say with all humility that I came late to climate change.”

Recalling her time serving as the United Nations High Commissioner for Human Rights between 1997 and 2002, Robinson said she does not recall “making any significant speech on climate change.” She said her perspective changed, however, after she started doing social and economic justice work in Africa, where she saw and heard firsthand climate change’s impacts on human rights.

“I kept hearing this phrase, it was the same everywhere I went, really: ‘Things are so much worse now,’” Robinson said.

Robinson also discussed how a changing climate will have “intergenerational” impacts. She acknowledged how recent global youth climate strikes and the Extinction Rebellion movement’s demonstrations in London earlier this month made apparent the urgency and magnitude of climate change’s disproportionate impact on future generations.

Robinson also pointed to the ways in which climate change impacts women, especially in developing nations. Women are typically responsible for preparing food and collecting water and firewood, which all can be made more difficult with increased drought and flooding severity.

“Even in disasters, we now know that women have long skirts, they grab their children, they can’t run, they can’t climb trees, and they die in much bigger numbers than men,” Robinson said, reflecting on her work in the field.

At her first UN Climate Change conference in 2009, Robinson said she found a dearth of perspectives of people with lived experiences of the negative effects of climate change.

“It struck me as being incredible when I went to my first climate conference...how male and technical this world was,” Robinson said. “Nothing about human rights. Nothing about gender. Nothing about what I understood to be the problem.”

Robinson identified recent progress as stemming from efforts of African, Asian, and Latin American women, who have made the issue a “top priority.” She said in Europe and the United States, climate change and climate justice pale as issues compared to sexual harassment, wage equality, and education.

Kaveri K. Iychettira, a postdoctoral fellow at the Kennedy School’s Belfer Center, asked Robinson how academics ought to help further the cause of environmentalism.

“You’ve got to take the issue of climate change very personally, in your life and in your work. It has to somehow penetrate,” says Robinson, citing her personal decision to become a pescatarian.

She also suggested that people should “get angry with those who have more responsibility,” including government officials and big businesses.

“Use your voice, your vote, your marching, your teaching,” she said.

A previous version of this article was accompanied by a photo from a different IOP event. It has since been corrected to the right photo.