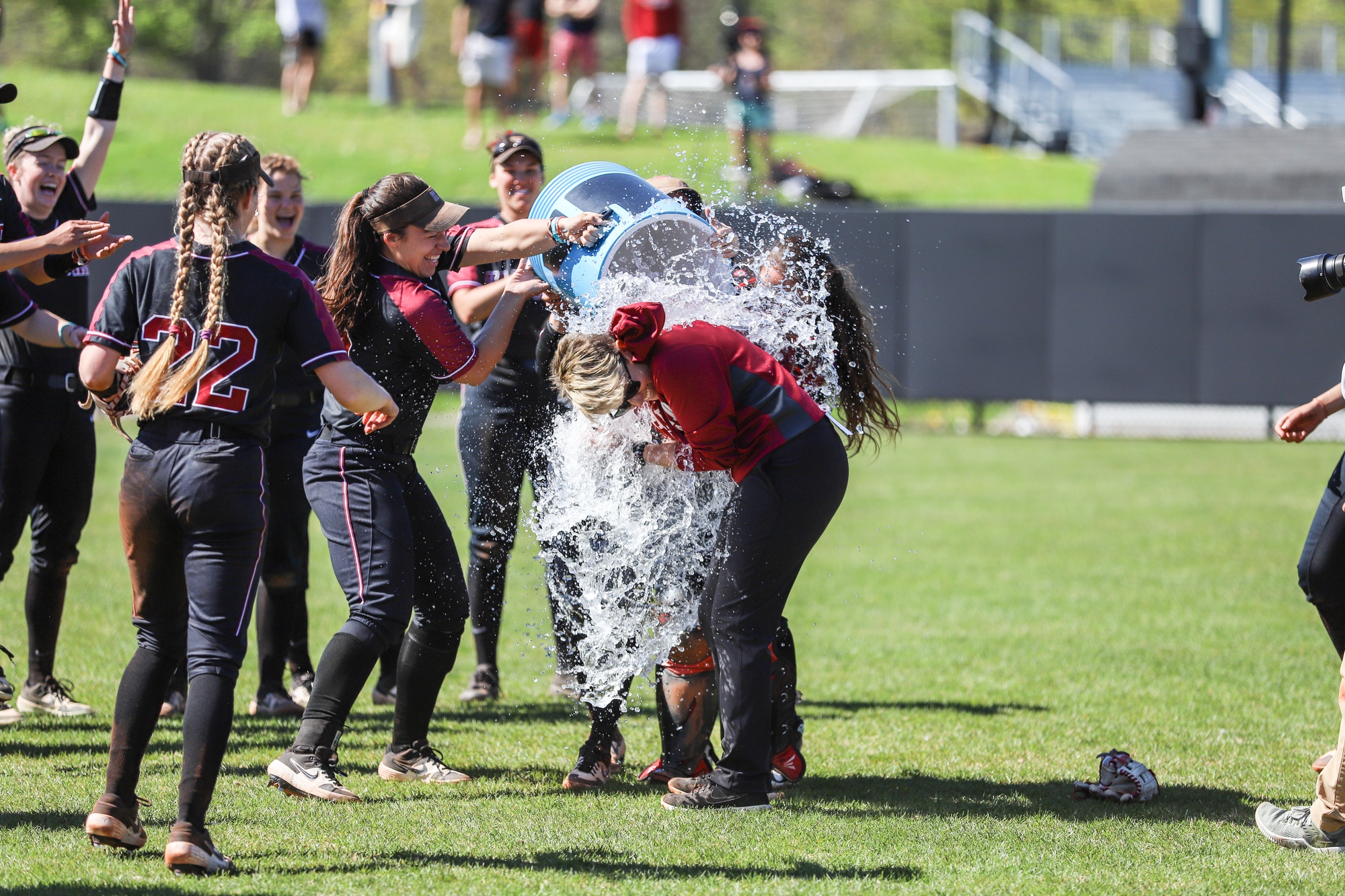 The Crimson advance to the NCAA Tournament for the second straight season. By Quinn G. Perini
By Mohamed Ahmed and Henry Zhu, Crimson Staff Writers

Within two innings on Saturday, the Crimson had already sent eight players home. One frame later, Harvard held a double-digit margin. Finishing the game 11-1, the Crimson cruised to a playoff series sweep of Columbia, booking a spot in the NCAA Tournament for the second straight season.

“We really wanted to extend our season,” senior catcher Elizabeth Shively said. “Just continue being the strongest team we could possibly be. We clinched the Ivy League title but we also wanted to continue playing and clinch the birth to regionals, which we did.”

In fact, the second game in this best-of-three series was so resoundingly one-sided that it was the first-ever mercy rule game in the history of the Ivy League Championships. Following Friday’s 10-7 win in Game One, Harvard (25-17, 16-5 Ivy) is also now the first team ever to score double-digit runs in multiple games during the playoffs.

“It didn’t matter what we had done the previous game,” Shively said. “Our mentality has always been this season to just focus on what’s on the table that present moment. What really got us to win both those games back to back and sweep was not focusing on past success but focusing on the present moment.”

In the series clincher, Ivy League Pitcher of the Year Katie Duncan proved her value in resounding fashion, tallying her ninth complete game with just one unearned run. Duncan’s season-inning total now stands at 149 frames with a 2.72 ERA, although her pitching demands have in no way ended. Her number will again be called on Friday, May 17 when the Crimson will face the nation’s sixth-best team, Arizona, in the opening round of the NCAA Tournament.

“It is super exciting to go to regional,” Shively said. “The returners on the team know that last year’s energy at UGA Regional was incredible and we are definitely looking forward to preparing for it.”

Beyond the mound, Harvard’s offensive production will be of equal importance if it seeks a chance at an upset. Saturday’s game was a display of offensive dominance for the home side, with four Crimson players — Meagan Lantz, Trina Hoang, Megan Welsh, and Shively — each reaching base two times. Shively singled to begin the scoring barrage in the first inning, before two doubles added three more runs in that frame. Hoang contributed one of those doubles in a game which saw her lead the squad with three RBI’s.

The Crimson repeated its output in the second inning, catapulted once again by a Hoang two-baser. Harvard tallied two more on the board in the third and one final run in the fifth to guarantee a mercy-rule ending.

Harvard exuded tremendous excitement after Duncan’s final pitch of the game, with the entire bench sprinting towards the field to celebrate. Associate head coach Lacy Wood was doused in water by senior Erin Lockhart before the team posed for their second trophy celebration in the last two weeks. Harvard previously locked up the Ivy League regular season trophy with a 9-1 victory over Cornell on May 6.

The opening game in the series was much more of a back-and-forth battle. Duncan earned the nod and lasted three innings, striking out three in the process. A four-run second inning propelled the Crimson to a 6-3 early lead, but the Lions reciprocated with a quadruple-run mark of their own in the third. But an opportune double from Shively in the bottom of the fourth followed by a Hoang RBI rebooted the home side, and a combination of strong pitching from junior Alissa Hiener and a dagger home-run by Welsh secured the game one victory.

“We knew that Columbia was gonna battle really hard,” Shively said. “Our mentality was keep fighting, keep pushing and not let them get any momentum. Every single person was brought in and the energy was incredible from the dugout.”

The Crimson completed its weekend the following afternoon without needing a third contest, and will have a little less than a week for its challenge on the national stage. Many members of this squad reached this stage last season, and are prepared for more. The road forward is not easy, but this Crimson side knows it has more winning than losing in its recent history.

“We need to be super sharp and super focused,” Shively said. “I know I’m excited because hopefully we end up going somewhere new and exciting, playing teams we have never played before. It is a really great experience to represent your conference at regionals and that is what we plan to do.”