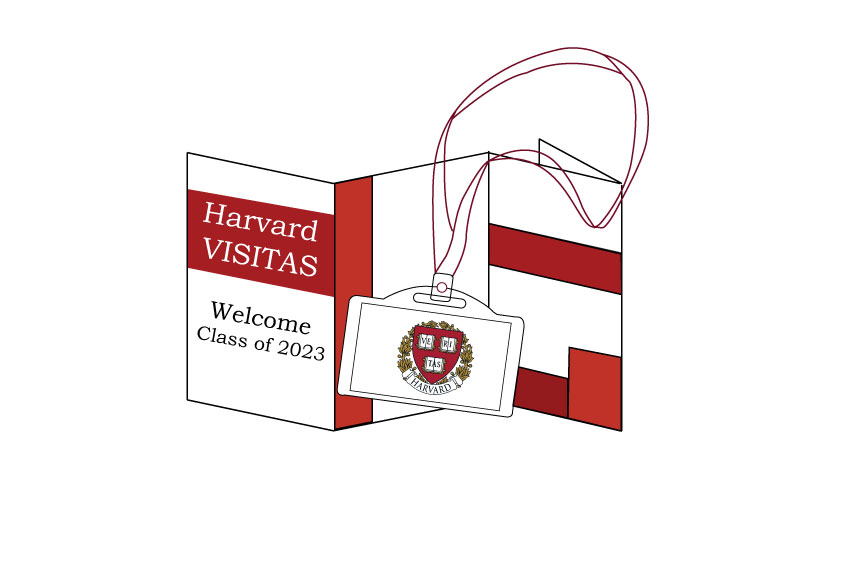 "We don’t spend a lot of money all at once during the rest of the year, so that’s probably why the bank deactivated our card on the Sunday afternoon of Visitas."
Advertisement
Advertisement

Do You Know What You're Getting Yourself Into?

But spending the money is worth it, because a successful Visitas is imperative for NAHC. We’re a small group, and if we don’t convince enough prefrosh to join as freshmen, our numbers will dwindle. We feel like we have to convince Native prefrosh to commit to Harvard — and once that happens, we have to convince them that we are a community worth investing time in.
By Anna Kate E. Cannon

It’s 5 p.m. on Saturday, and our hands are stinging from hot frybread grease. That’s the trouble with frybread — when you drop the rounds of dough into the pan of oil, it’s bound to splash. Bubbles pop and spray droplets onto whoever is flipping the pieces. But the whole process gets a little more complicated when we’re in the Grays common room kitchen, which is full of college students.

Every year at Visitas, Native Americans at Harvard College hosts an event called the Frybread Formal (formal attire is “highly unnecessary” — we just like the alliteration). I attended my first Frybread Formal as a prefrosh in 2017, where I met the Harvard Native community and decided that Harvard might just be the right place for me. The frybread was a little cold and rubbery then, and it will be cold and rubbery by the time we eat it tonight in Quincy, where we will welcome the Native prefrosh, tell them about Harvard, and try to convince them to enroll in the fall and join our community. I was elected co-president a week ago — Visitas is my first major responsibility as one of NAHC’s main leaders.

We choose frybread every year because it’s a quintessential Native comfort food. Many of us have recipes memorized — a pinch of this, a handful of that, a bowl of flour measured by eye.

But we also choose frybread because it’s cheap. Flour, salt, baking powder and a little hot water: knead it, shape it, throw it into a pan of melted Crisco. My co-president and our treasurer purchased the ingredients using the club credit card, with money left over from donations for a conference we hosted during my freshman fall.

We don’t spend a lot of money all at once during the rest of the year, so that’s probably why the bank deactivated our card on the Sunday afternoon of Visitas. Between food, drinks, and utensils for Saturday, a large catering order for Sunday, and supplies to decorate our activities fair booth, the bank grew suspicious, apparently. But spending the money is worth it, because a successful Visitas is imperative for NAHC. We’re a small group, and if we don’t convince enough prefrosh to join as freshmen, our numbers will dwindle. We feel like we have to convince Native prefrosh to commit to Harvard — and once that happens, we have to convince them that we are a community worth investing time in.

The weekend’s efforts begin when Native prefrosh meet their student hosts — most are hosted by NAHC members through the University Minority Recruitment Program, hand-matched by a NAHC member working at the office according to academic interests, tribal affiliations, and home states. General pool hosts (hosts who are randomly matched to potential students) are asked only to provide a floor to sleep on; we’re expected to spend the weekend with our prefrosh, take them to lunch, and be friendly and supportive all weekend. We have a great time — it’s fun to befriend the prefrosh, to hang out as a group, to eat frybread and Panera sandwiches. But for NAHC’s leadership, a sense of urgency hangs over the weekend. For many people, Visitas is like any other weekend. For cultural groups like mine, Visitas can be an exhaustive recruiting event, with stakes as high as the group’s survival.

At the formal, we ask the prefrosh if they’ve committed to Harvard. If they have, there’s a chorus of “yay!” from around the room. If they’re still deciding, we ask them what questions they have about Harvard. Which schools are you still choosing between? What’s keeping you from committing? Is there anything we can do to help?

I sometimes joke that we become a branch of the admissions department during Visitas.

The Frybread Formal is the first of three events that we look forward to every year. On Sunday, we meet at the river for PicNAHC, to eat boxed lunches catered from Panera. Then it’s time for the activities fair at the Student Organization Center at Hilles, where we yell information over the din to interested prefrosh.

This year, our table is on the third floor, between the Nigerian Students Association and Fuerza Latina. Both groups have more people staffing their tables than us, and both have speakers. As the fair progresses, their music gets louder; people from both groups start dancing, until the space around our table is filled with swirling bodies. The energy is exciting; we’re all trying to reach interested prefrosh, but, as the din grows, it becomes harder and harder for me to talk to prefrosh who approach NAHC.

My attention is drawn across the room, where another group is yelling. I am curious about how groups like the Harvard College Standup Comic Society (HCSUCS) — organized around a shared interest, rather than a common cultural identity — approach Visitas weekend.

HCSUCS, I learn, participates in two events during Visitas weekend. The first is the activities fair, and the second is the Visitas Stand Up Comedy Show. HCSUCS puts on shows every month, and according to their president Freddie S. Shanel ’21, they usually start preparing for shows a week in advance. Visitas planning doesn’t differ too much from normal operations.

I’m struck by their casual approach to Visitas when I talk to Jackie M. Feffer ’22, a HCSUCS member. She points to a poster she made right before the fair started. “It didn’t take that long,” she says, and laughs.

NAHC wants prefrosh to come to Harvard so they can be part of our community. When I talk to Feffer, I notice an emphasis on the extracurricular interest: “You could do stand-up anywhere,” she says. “We would want it to be at HCSUCS, but I just want to let people know it’s a fun thing to try out wherever you go.”

I had a similar conversation earlier with Ava M. Hampton ’21 and Jonathan Castillo ’21 at an information session for the Harvard-Radcliffe Dramatic Club. I asked them if they talk to prefrosh about whether or not they’re committed to Harvard, something we ask in NAHC all the time. They say that HRDC generally doesn’t ask.

When she says this, I think about the other potential students I met during my own Visitas — three of us hung out for a long time over the weekend, but I was the only one who committed to Harvard. One went to Yale, and I see her sometimes at Ivy Native Council. The other went to Stanford, and I haven’t seen him since. When I reminisce with my NAHC friends about Visitas weekends past, his name still comes up. Each potential new NAHC member lost is significant.

I can’t speak to the way these interest groups approach community, and I certainly don’t fault them for so earnestly encouraging a passion for their activities. But I can’t imagine being so casual about prefrosh committing to other schools. That attitude isn’t something we can afford.

Back at the activities fair, I meet Anisha Dok ’20 and Julie Ngauv ’20, co-presidents of the Khmer Student Association. The KSA is a new cultural organization; it was founded last semester with approximately ten members and the intention to grow. KSA was one of the many co-hosts of the Pan Asian potluck.

“It was a lot of time I guess, because we had to cater,” Dok says of the effort Visitas required. “The restaurants that we wanted to cater from weren’t willing to give us food and bring it all the way to Cambridge.”

“Yeah, because it’s really hard to find Cambodian food in the area,” Ngauv adds. “So we had to go to Lowell, Massachusetts, and one of our board members had to drive the food back.”

They’re describing a logistical problem, but I know the baggage that it comes with: the mental toll of taking time out of a weekend at the end of the semester, the physical toll of traveling, the emotional toll of having to continuously display an inviting, supporting community. When I interview Cindy Gao ’21, she shares some of the same concerns. Gao is co-president of the Harvard-Radcliffe Asian American Association, and she says that Visitas is important to her because it strongly influences the future character of AAA.

And, if community-building efforts fail, there can be long-term consequences.

I mention that I’m writing this piece to a classmate of mine, Anum Shafqat ’21, while we’re studying for a final. She perks up; it doesn’t take long for her to recount her own Visitas experience.

“When I was a prefrosh, I remember going to a [South Asian Association] event and feeling very excluded because a lot of the culture there was very cliquey,” Shafqat says. “It’s like, it’s not that you guys aren’t friendly and nice people, it’s that I feel like you have to be a certain type of person to fit in.”

“And that kind of shaped my whole SAA experience — because of how I felt during Visitas, I realized that’s not the place for me to be.”

The last person to stop at our activities fair table asks us what kind of support system we are. The question is par for the course. Every Visitas, we talk to prefrosh about how we are each other’s support system; how we check in every week, proofread each other’s emails, convince each other to go to office hours or to reach out to professors for help, talk through the steps of dropping classes or getting a CAMHS appointment or taking time off.

I’m practically shouting over the music as I tell them that there are things we will inevitably go through as Harvard students, and it helps to know that you have a group of friends there to help you through it, as best they can.

My voice cracks and I have to cough. When I try to finish answering their question, my voice is gone.