After three illustrious seasons at Harvard, the blue-liner will forego his senior campaign, for which he was elected a tri-captain, and embark on his NHL career.
By Spencer R. Morris 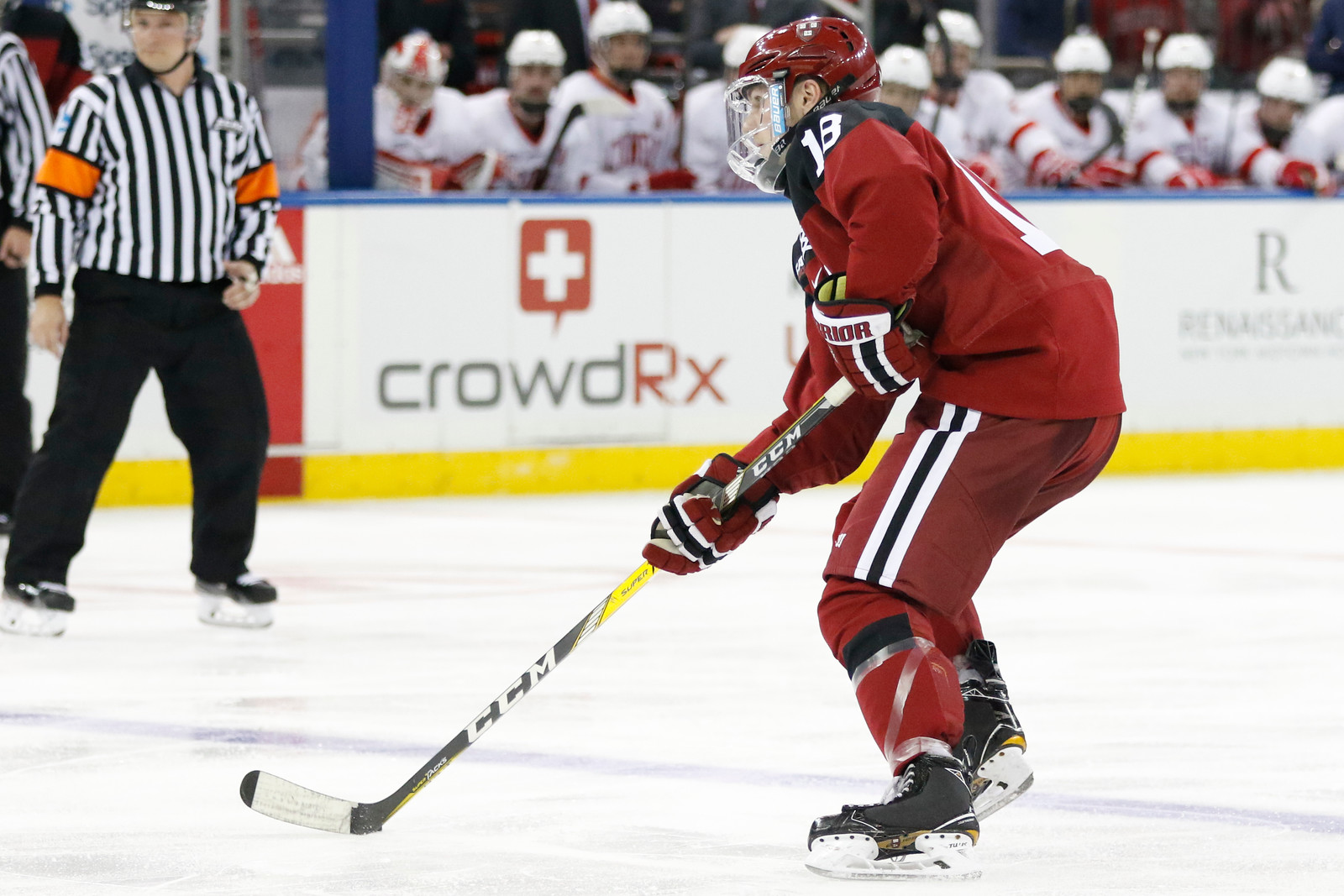 Fox, pictured here at Madison Square Garden back in November's Frozen Apple Game, will call this historic barn his home as a member of the New York Rangers. By Timothy R. O'Meara

Junior defenseman Adam Fox has built one of the more impressive careers in Harvard men’s hockey history. He’s done so through just three seasons, not even requiring a senior campaign to blow past 100 career points, receive All-ECAC First Team honors three times, and draw national attention from the collegiate and professional levels.

It looks like Fox’s time in the Crimson sweater is over, however. On Wednesday, Harvard’s captain-elect announced that he will forego his senior collegiate season after inking an entry-level deal with the National Hockey League’s New York Rangers, his childhood team.

"It's definitely a pretty special opportunity," the Jericho, N.Y. native said. "Having been to enough games in the crowd and then being able to play on the ice, it's always special. Hopefully I'll be fortunate enough to put on a Rangers jersey and play on that ice."

Blueshirts GM Jeff Gorton acquired Fox’s rights in a trade finalized on Tuesday that saw the Carolina Hurricanes ship away the promising defenseman prospect in return for a 2019 2nd-round pick and a conditional 2020 3rd-round pick which becomes a 2nd-rounder once Fox plays his 30th NHL game.

“I had heard talks…. Obviously [a trade] was a possibility,” Fox said. “Then I found out the other day that it was official, and obviously it was pretty exciting for me.”

This is not the first time Fox’s rights have been moved. The Hurricanes acquired them from the Calgary Flames as part of a blockbuster trade in the summer of 2018. The Flames originally selected the offensive-minded defenseman in the third round of the 2016 NHL Entry Draft, 66th overall.

After the Crimson’s season concluded in late March with an NCAA Regional Semifinal defeat, early indications that Fox was not keen on signing with Carolina motivated the Hurricanes’ decision to seek compensation via trade for the blue-liner’s draft rights. 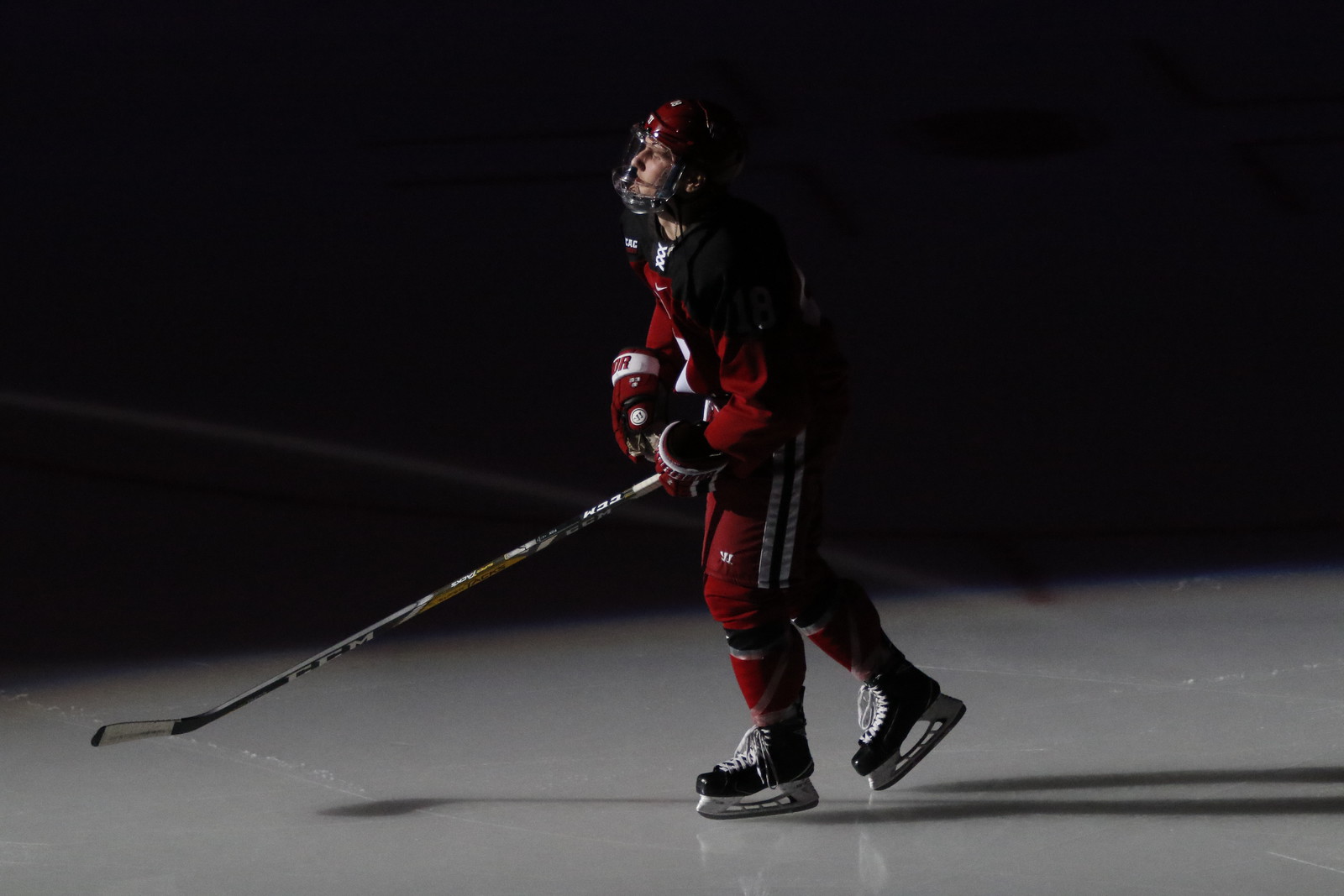 From the moment he arrived at Harvard, Fox commanded the spotlight, easily eclipsing the 100-point mark in his three seasons with the Crimson. By Timothy R. O'Meara

This comes despite Carolina General Manager and President of Hockey Operations, Don Waddell, being confident that the organization could sign Fox to an entry-level deal next season.

“I'd say it's 99.9 percent we will get him signed,” Waddell said shortly after acquiring Fox’s rights. “I don't see it being as issue at all.”

Per the league’s collective bargaining agreement, Carolina’s rights to exclusive negotiations with Fox would have expired next Aug. 15. This annual deadline allows NCAA players who were drafted four years prior to evade the restricted negotiation rights of their respective NHL teams. Former Harvard standouts Jimmy Vesey ’16 and Alexander Kerfoot ’17 are among the many players in college hockey that have taken advantage of this option, instead choosing where they began their professional careers.

The Hurricanes blue line currently features a crowded right side, with talented rearguards Dougie Hamilton, Justin Faulk, Brett Pesce, and Trevor van Riemsdyk demanding the bulk of the minutes. By the 2019 trade deadline, the club was eyeing a playoff spot and elected to retain its blue-line depth in favor of making room for a potential Fox arrival in late March.

“There’s a good opportunity [in New York] for me,” Fox said. “Hopefully I’ll step in and play. There’s a lot of factors. Being close to home is obviously pretty nice for me. It’s definitely a good spot.”

Thus, Harvard’s star defenseman had resigned to taking his time to decide on his professional future, inclined to wait until the summer to assess his opportunity. The Rangers, Vesey’s current allegiance, were not as inclined to wait.

“I didn’t think [the trade] would progress as fast as [it] did,” Fox said. “I kind of just took it from there. Obviously, things change, and it happened a lot quicker than I initially thought.” 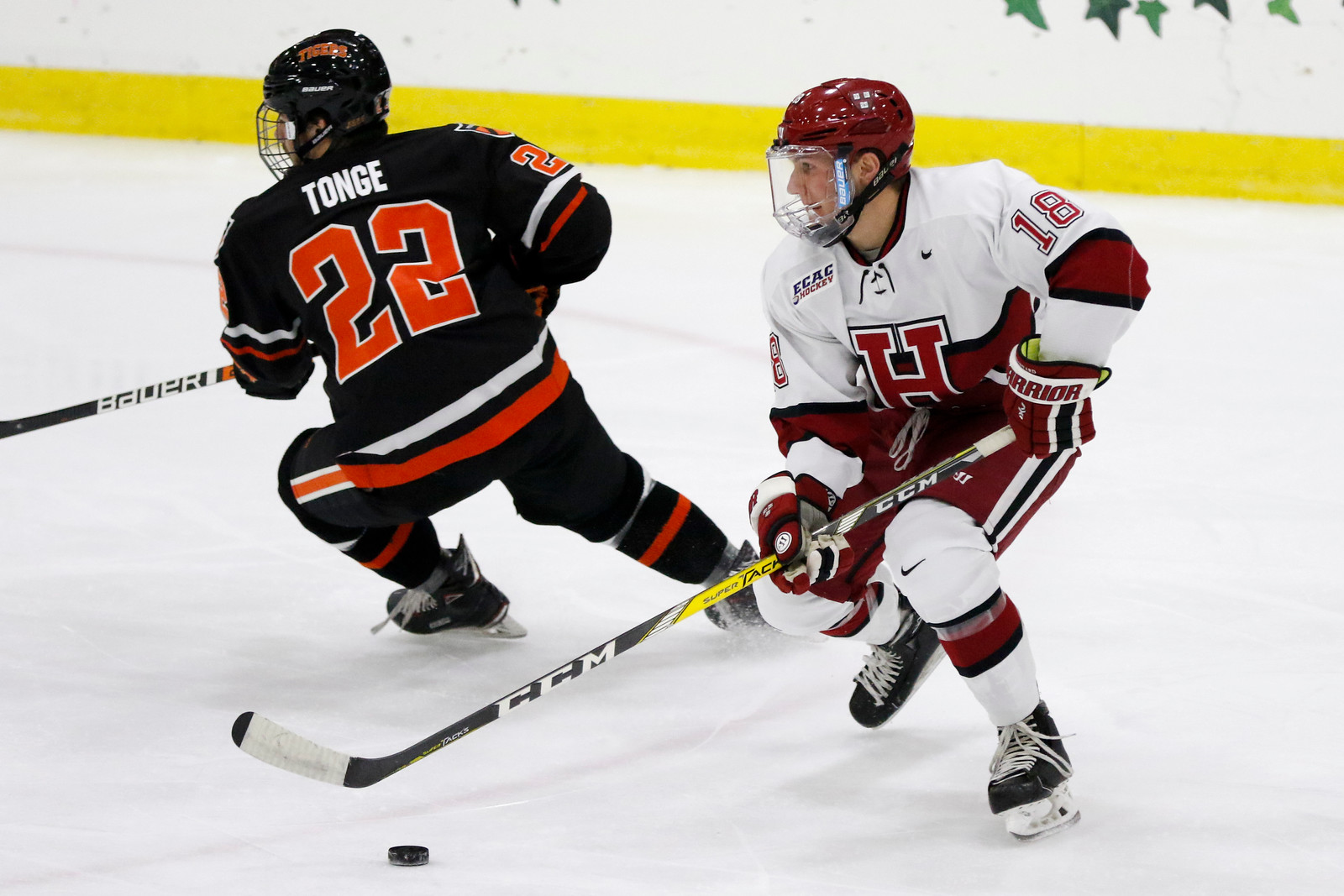 Fox's expert puck-moving and nifty stick skills separated him from most of the competition during his time in the ECAC. By Timothy R. O'Meara

Crimson coach Ted Donato ’91 and next year’s squad were certainly excited at the prospect of retaining Fox for his senior year. If next season were to go anything like his first three, Fox would have become the ECAC’s first player to be named to four all-conference first teams.

The right-hand shot’s career numbers with Harvard (22–94—116, +43) reflect his knack for facilitating, both at even strength and as the quarterback on the team’s first powerplay unit. He has been a reliable producer and integral part of the squad since he arrived in Cambridge in the fall of 2016. Given his individual development and increasing demand for national recognition throughout his career, Fox would have entered the 2019-2020 campaign as one of the favorites — if not the favorite — for the Hobey Baker Award, given to Division I’s most outstanding player.

“Bittersweet is a great word for it,” said Fox, in reference to his NCAA departure. “It’s a great opportunity to do what I dreamed of doing, playing at the next level…. Just having the opportunity to play at Harvard was definitely special and something I enjoyed — cherished — but it was definitely a decision I felt comfortable making. It’s definitely tough from the other end, but I’m excited for looking forward.”

While a decision like this is often bittersweet, Fox leaves Harvard after one of the most impressive seasons by anyone to suit up in crimson and white. His 48 points (9–39—48) in 33 games in 2018-2019 set a program record for single-season points from the blue line and earned him a third consecutive CCM/AHCA First Team All-America designation. Fox’s 1.45 points per game paced the nation, and the skilled rearguard was named a Hobey Baker Hat Trick finalist.

As he looks ahead to life as a professional hockey player, Fox will strive to continue the recent stretch of Harvard icemen excelling on the next level. While his departure leaves a void on the Crimson’s back end, the 2019-2020 rendition of Harvard hockey still promises to compete for an ECAC crown and place in the National Tournament.