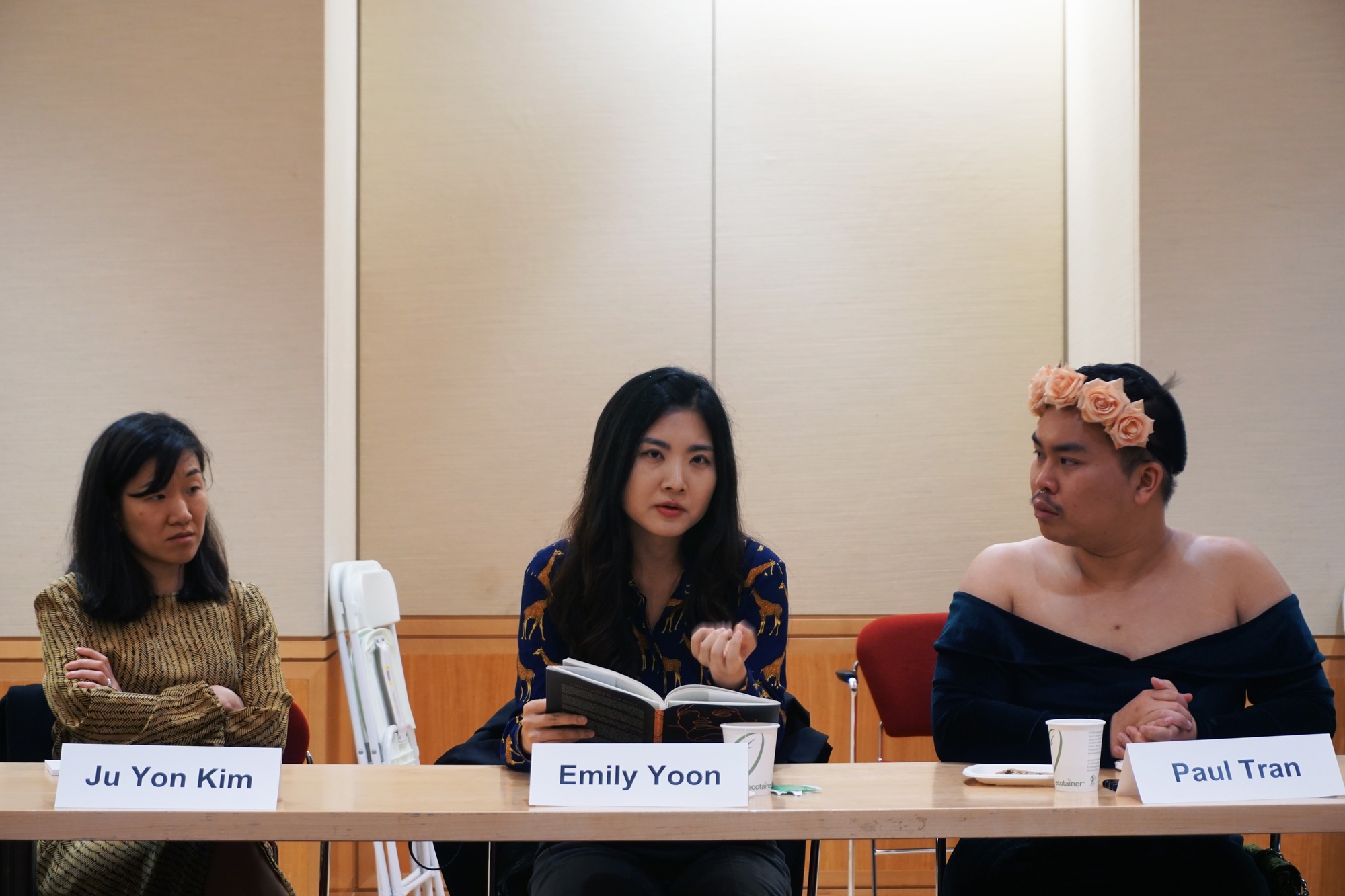 Beyer has authored a poetry collection called “We Come Elemental,” Tran placed in the Top 10 at the 2015 Individual World Poetry Slam, and Yoon was a recipient of the Ruth Lilly and Dorothy Sargent Rosenberg Poetry Fellowship from the Poetry Foundation in 2017.
By Rachel Chen and Virginia F. Tiernan

There is something theatrical about the way people straggle into CGIS South on this ordinary, rainy Monday afternoon. One by one, the drenched attendees shuffle inside, shaking out their umbrellas before descending into the depths of the CGIS South basement. They have braved the downpour for “Writing Asian America: A Reading and Conversation with Three Poets.” The three poets and Ju Yon Kim, an English professor and the organizer of this event, sit at the head of a circular arrangement of tables filled by around 25 attendees.

Kim briefly introduces the poets Tamiko Beyer, Emily Yoon, and Paul Tran. Collectively, the recognition they’ve earned in the poetry world is clear, and no one in the room seems surprised by their impressive list of awards. Beyer has authored a poetry collection called “We Come Elemental,” Tran placed in the Top 10 at the 2015 Individual World Poetry Slam, and Yoon was a recipient of the Ruth Lilly and Dorothy Sargent Rosenberg Poetry Fellowship from the Poetry Foundation in 2017.

For the next two hours, Beyer, Yoon, and Tran have a captive audience. As they successively read their works, the room begins to feel smaller, warmer, and brighter.

Beyer reads first from her upcoming manuscript. Her voice is soft but firm, and its power seems to rest in the spaces between her words. She reads poems on topics ranging from systemic racism to refugee detainment to police brutality —all seem to be informed by her passions for social justice and mitigating “climate disaster.” These causes drove her “to move people [and] to build power” in her writing.

But she also views herself as part of a broader push for cultural change. “I don’t think one thing can create social change, I see my poetry and all the forms of my writing as being part of a giant tidal wave of change,” she says.

While she says her writing is always informed by her Asian American heritage, being Asian American is not always an explicit theme in her work. She identifies as a woman of mixed race and often feels the need to explain her relationship with the term: She is half-Japanese American and spent ten years of her childhood in Japan.

After Beyer, Tran begins to perform their poetry from memory. There is no spotlight in this ordinary classroom, but they don’t need one. The space expands to hold the dynamic volume of their voice, the swirl of their green velvet dress, and their Ariana Grande references. In contrast to Beyer, Tran’s poems are unabashedly about themself and their family history.

When they first began writing, they struggled to justify what right they had to write at all, searching for the answer in poems focused on their family’s immigration history. So, by taking on a “responsibility of representation,” they found themselves writing about topics that felt “easily politified or recognizable.”

Only recently have they begun to value other parts of their life, ones that indulge a more personal, individual narrative.

But, Tran stresses the impossibility of disentangling these more collective Asian American experiences from their more personal identifiers.

“Even if I’m writing about my experience as a rape survivor, it is inherently Asian, queer, trans, and first-generation,” they say.

As Tran ends their expressive reading, the room’s attention shifts to Yoon. Yoon breaks the expectant silence, “Is my volume okay?” It isn’t, but the room contracts and each listener leans in, on the edge of their seat.

For Yoon, poetry is a “historical document.” Unlike a textbook or official records it allows “audiences [to] enter a historical knowledge through emotion.”

She reads from her book titled, “A Cruelty Special to Our Species.” Embodying her grandmother’s perspective, she delicately broaches the dark features of the Korean War. Yoon is Korean Canadian but she understands Asian America as “borne out of a political conviction” and a “notion of pan-Asian solidarity.”

When Yoon was younger and just beginning to write poetry, she found that Asian American writing showed there that “there are ways to write about integration, about isolation, about language with nuance and tenderness. I don’t think that I knew how to describe my experience or emotion.”

Yoon closes the book, a peaceful conclusion to her reading. The three poets stand and stretch. The pace of the room shifts and the performances from minutes before melt away as the room fills with casual chatter. Friends of the poets in the audience leave their seats for exuberant reunions. Behind them, admirers of the poets’ work line up to offer their compliments. Others leave without fanfare, slipping out of the room with their still-damp umbrellas in hand.