A ‘Product of the Resistance’: The Creation of African-American Studies

For the majority of Lee A. Daniels’ undergraduate experience, the AAAS Department — founded in 1969 — had simply been a hope for many students. But now, the department stands as the “product of the resistance” both from within and outside Harvard, Daniels said.
By Isabel L. Isselbacher 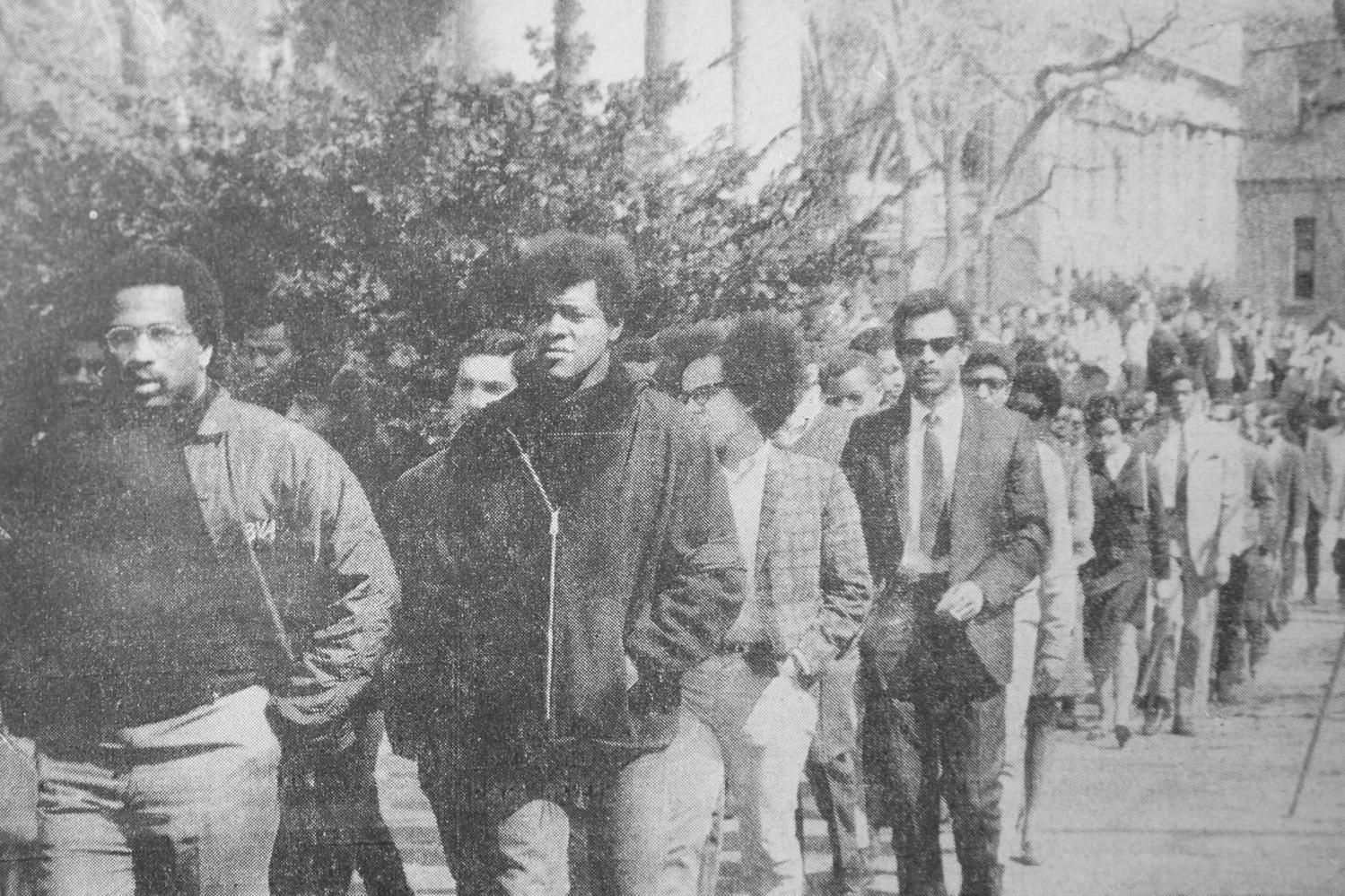 This past November, Lee A. Daniels ’71, traveled with his 14-year-old nephew to Cambridge to attend the Harvard-Yale Football Game. Harvard’s football team emerged victorious, but Daniels said he remembers the weekend for another reason.

The day before the Game, Daniels — a former Crimson editor — took his nephew to visit the Department of African and African American Studies on the second floor of the Barker Center. Though the department was closed that Friday afternoon, the in-person visit nevertheless held a special significance for him.

For the majority of Daniels’ undergraduate experience, the AAAS Department — founded in 1969 — had simply been a hope for many students. But now, the department stands as the “product of the resistance” both from within and outside Harvard, Daniels said.

“Back then, we were — that is, those students who were pushing for Black Studies Department — castigated as being radical, being not serious about the academic experience,” Daniels said.

A ‘New Stage of Black History’

Jeffrey P. Howard ’69 said the creation of Afro-American Studies was a long time coming at the University.

“It was clearly an idea whose time had come,” Howard said.

Though it is now referred to as AAAS, the department has undergone a series of name changes, including Afro-American Studies and Afro Studies since its inception.

The surge in demands for a department had begun in April 1968 when, in the wake of Martin Luther King Jr.’s assassination, the Harvard-Radcliffe Association for African and Afro-American Students had published their “Four Demands” in an advertisement in The Crimson. Among these demands was the development of more courses pertaining to black students at the University, an endowed chair for a black professor, and increased hiring for lower level black faculty.

That same month, the Ad Hoc Committee of Black Students, of which Howard was a member, had been established to facilitate the conversation surrounding what form African American studies should take at Harvard.

Per the report’s recommendations, the faculty agreed to establish a degree-granting program — which would function as a center and not as a department — in African American Studies.

Despite this, black students continued to advocate for a department. They demanded that black students be given a direct role in creating the program, whether that be through developing the curriculum or helping to select faculty members.

In 1969, the Students for a Democratic Society — an organization at the epicenter of much of the campus’s political action — backed the demands of black student activists. The SDS incorporated black students’ demand for a department as one of its own initiatives, resulting in joint political demonstrations throughout that April.

Myles V. Lynk ’70 – a member of standing committee on Afro-American Studies — galvanized African American students who were engaged in the strike effort. He was selected to speak at the SDS stadium rally at Soldiers Field on April 15, 1969, to petition the University for change.

“Speaking for me, I think the sense was that you were walking on air, that everything was uncharted, that it was new, and there was no script,” he said, reflecting on the precipitous time of unrest.

Lynk recalled that the confluence of the assassinations of King and Robert F. Kennedy with the Vietnam War gave rise to an unsettled, politically charged energy on Harvard’s campus.

“It was a time of great ferment and uncertainty and hope and aspirations,” Lynk added.

A week after the Soldiers Field rally, the faculty acquiesced to students’ demands and voted not only to establish Afro-American Studies as a department, but also to give students a role in its development.

When the department was finally voted upon, Daniels said he felt that it was “long overdue.”

“It was the beginning of a new stage of black history at Harvard,” Daniels said. 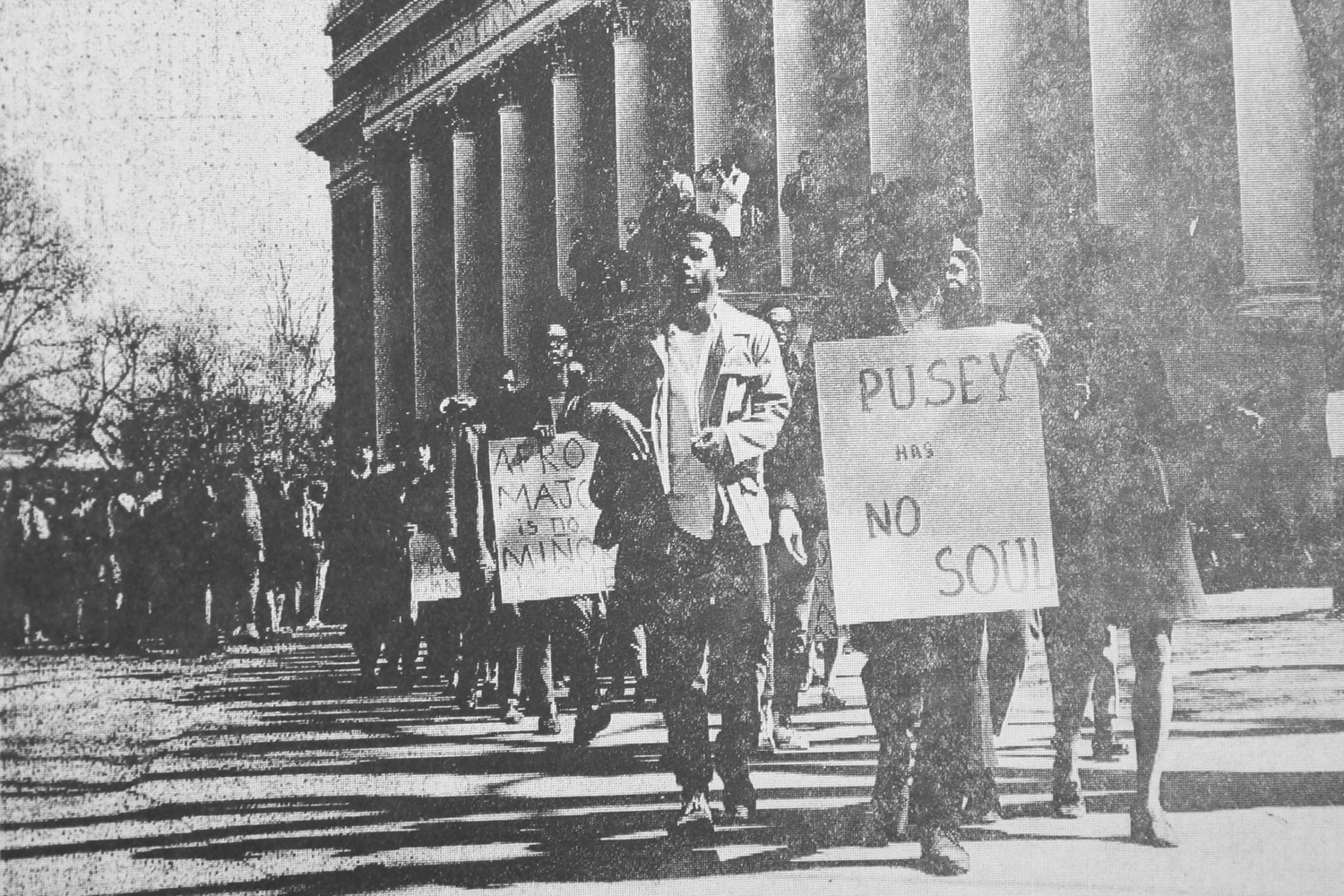 Student members of the Association of African and Afro-American Students joined the 1969 Students for a Democratic Society strike. By Courtesy of The Harvard Crimson Archives

From Dissent to Success

Daniels said AAAS stands as a veritable “academic powerhouse” at Harvard since its inception in the late 1960s.

“We're owed a big apology from those people who said Black Studies programs would never amount to anything,” Daniels said.

In 1970, the AAAS department rolled out its inaugural set of 25 course offerings. In the 2018-2019 academic year, the number of courses listed has climbed to more than 200.

“It's far beyond what we expected,” Daniels said. “You look at the variety of offerings at the department — not only in African American studies but in African studies — and you see how wrong the critics were that said there was not something there that was worthy of scholarly attention.”

Former Dean of the Faculty of Arts and Sciences Henry A. Rosovsky — who also chaired the Faculty Committee on African and Afro-American Studies — initially preferred that AAAS be a committee over a department. In an interview last week, he said the department has become a “tremendous success.”

“It was not easy in the beginning. It was difficult to find leadership; it was born at a time of tremendous internal dissent and problems,” Rosovsky said. “But I very much believe in the subject. I believe in the vision.”

Rosovsky said he believed some opposition to the foundation of Afro-American Studies stemmed from beliefs that the field would become a “political accommodation” amidst the racial turmoil in the 1960s.

“But I think the department, by its intellectual achievement and strengths, convinced everybody that this was not simply a political issue,” he said. “On the contrary, it was really a major intellectual subject.”

Sebastian Jackson, a current Ph.D. candidate in the AAAS department, said the department’s development at Harvard has been a “very validating” experience. Jackson said he thinks the department does “get a lot of respect” from the University in comparison to how the field is treated elsewhere.

“One of the reasons why I wanted to come to Harvard was because it was quite clear that, at most top universities in the United States, Africana Studies and African American Studies are still very much ghettoized and not really taken seriously among the other departments,” Jackson said.

Even so, Ibrahim spoke highly of his experience in the course and the department as a whole.

“I definitely felt like I was growing as an intellectual,” he said “It’s like a journey and we’re all doing it together.”