“Do you mourn Martin Luther King?” the advertisement read. “Harvard can do this.”
By Ruth A. Hailu 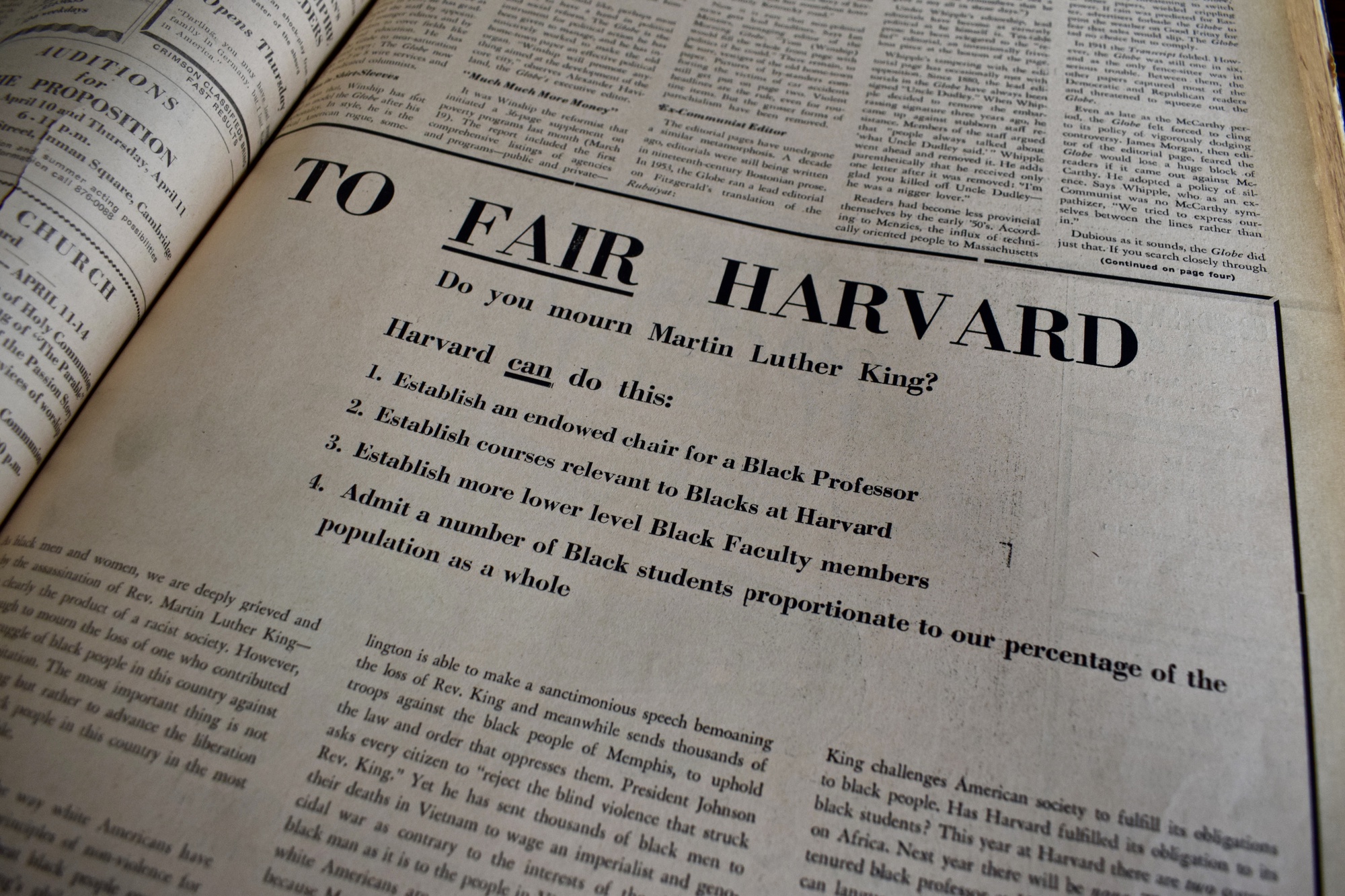 The April 10, 1968 issue of The Crimson featured the Four Demands.

On April 10, 1968, just days after Martin Luther King Jr.’s assassination, the Harvard-Radcliffe Association for African and Afro-American Students—AFRO for short—published an advertisement in The Crimson.

“Do you mourn Martin Luther King?” the advertisement read. “Harvard can do this.”

What followed was a list of four demands for improving the experience of black students: establish an endowed chair for a black professor, establish courses relating to black students, hire more lower-level black faculty, and admit more black students to Harvard.

King’s death brought newfound attention to ongoing black student activism at Harvard, both in the pages of The Crimson and on campus more generally.

“I have found that it's not necessarily that his death either inspired greater action or deterred or discouraged us, but that we strove to focus on the ideals that he expressed,” said Willene A. Jones Johnson ’68, who was a member of AFRO as an undergraduate.

The 1968 advertisement expressed an idea similar to Johnson’s.

“The most important thing is not to mourn Rev. King but rather to advance the liberation movement of the black people in this country in the most effective manner possible,” the students wrote. “Let Harvard know that superficial solutions to complex problems will only root more deeply the frustration and hatred tearing this country apart.” 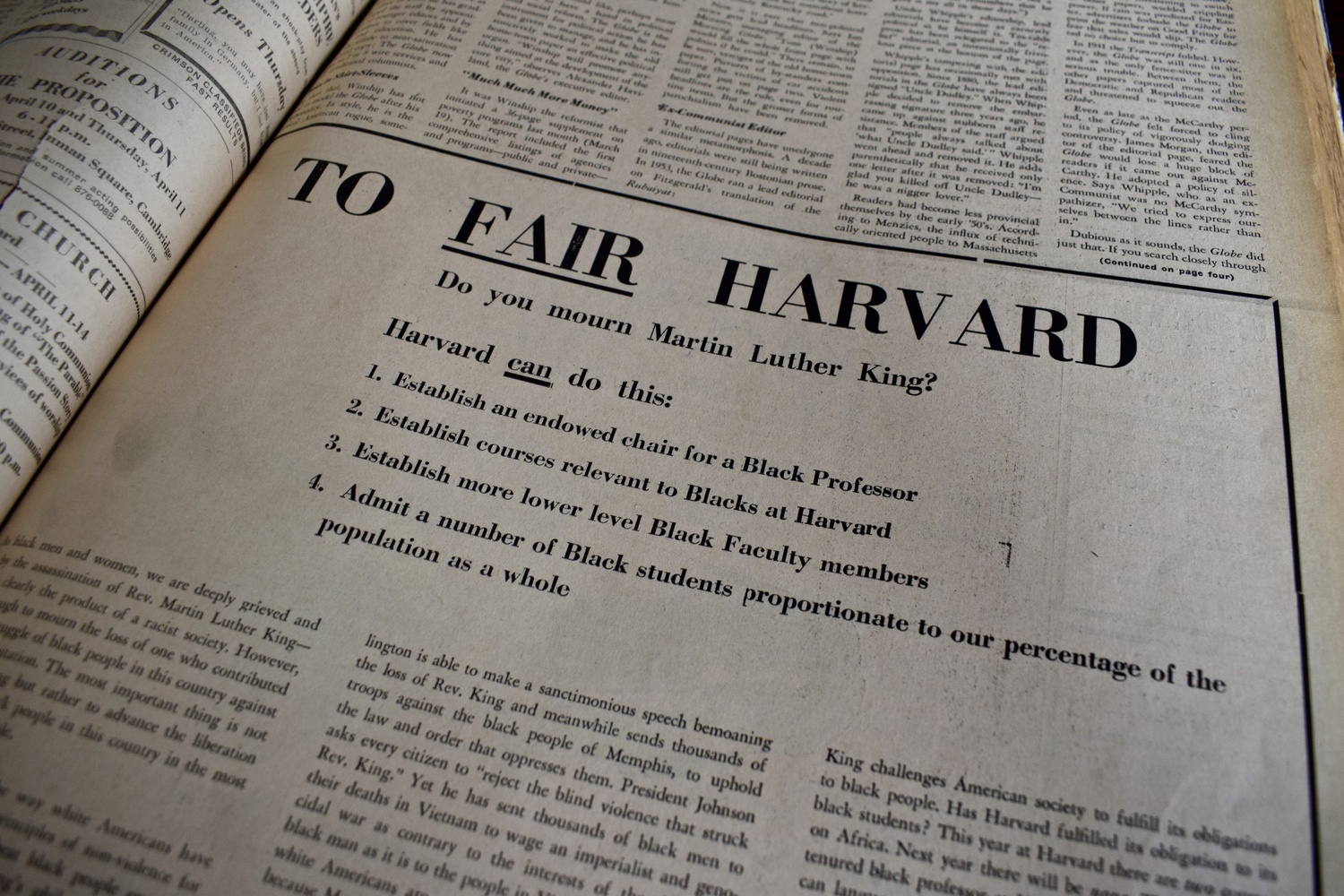 “Yes, Harvard is indeed a microcosm of American society—there is no place for the black man at Harvard,” they added.

Mourning and protest were intertwined: While University President Nathan M. Pusey ’28 led a service for King in Memorial Church, black students held a separate ceremony outside, on the church steps.

“I think you see in the demands, some of the frustration that we felt, and the frustrations, obviously, were largely reflecting the horror that we experienced at the loss of Dr. King,” Johnson said.

From Demands to Recommendations

Several black alumni recalled how small Harvard’s black population was relative to the student body as a whole in the late ‘60s. The black students who were accepted, however, came from all over the country and world. 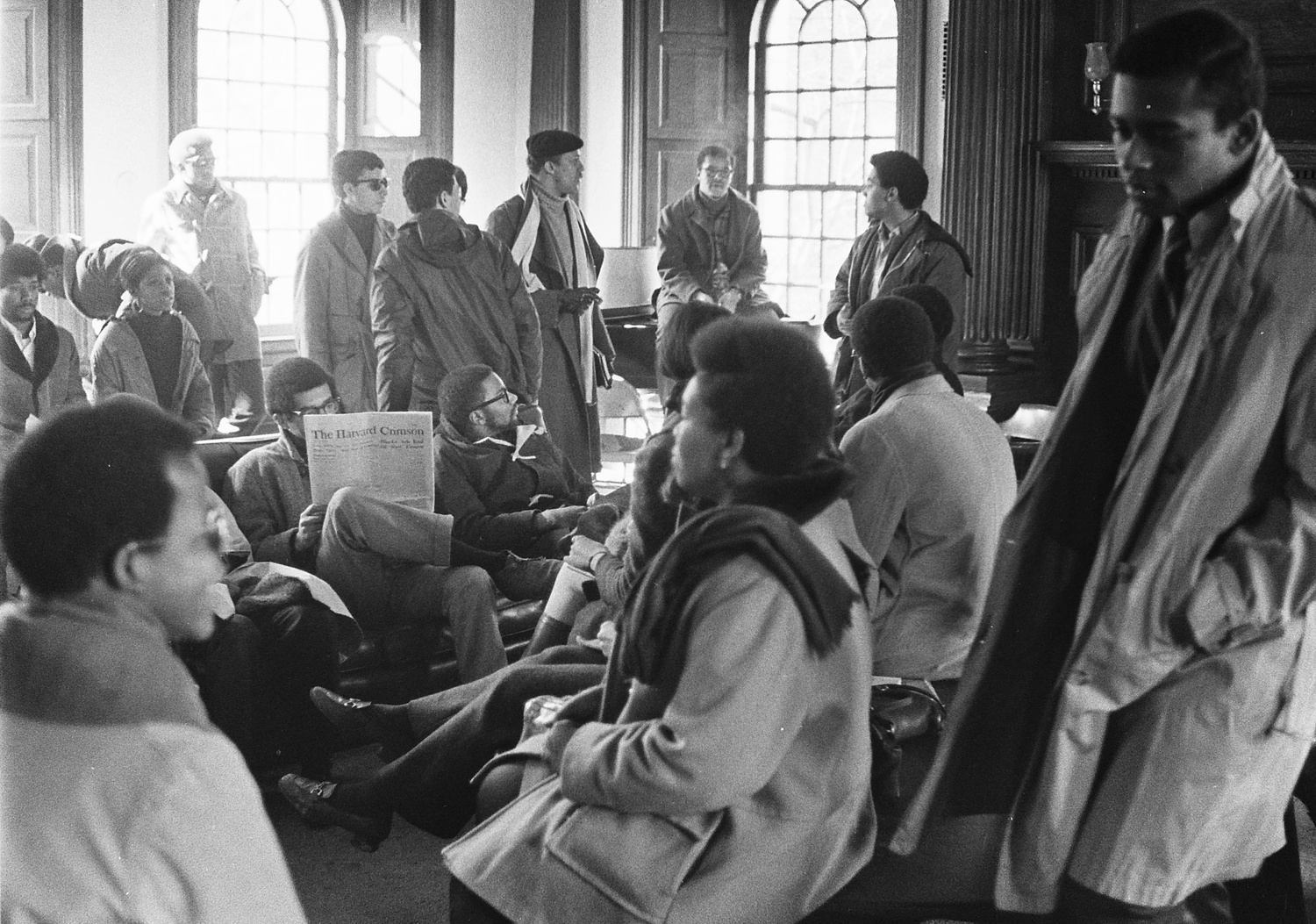 By Courtesy of Lee S. Smith

Smith said he thought the four demands were ideas that all black students could agree upon and coalesce around.

Charles J. Hamilton Jr. ’69, a leader of this movement who often reported on race for The Crimson, said he believed that the University was responsive to black students’ grievances.

“I will tell you that the University was extremely committed to really trying to explore how to address these issues,” he said. “I can't say enough about how concerned certain members of the faculty were and the administration.”

The demands had some immediate effects. At the end of April 1968, Chase N. Peterson ’52, then the Dean of Admissions and Financial Aid, pledged to increase recruitment for black applicants. According to a document that details the history of AFRO, the number of black students “doubled” the following fall.

In response to AFRO’s demands, the University also assembled a task force called the Faculty Committee on African and Afro-American Studies, chaired by Economics Professor Henry Rosovsky. The committee consisted of just one black professor, plus two black students who were allowed to join the committee as “observers.”

Four major recommendations came out of the Rosovsky committee. It recommended that the University create an Afro-American Cultural Center, which was established in 1969. The committee also suggested that Harvard launch an African and Afro-American Studies “program.”

This recommendation sparked frustration from students and professors because it proposed a “program” rather than a department. A program does not receive all of the benefits and institutional support that a department does.

Ephraim Isaac, who Harvard later hired as the first black professor in the African and African American Studies department, said this initial recommendation indicated that the University “wanted to treat African studies as second class.”

Students protested the “program” recommendation in April 1969, and by the end of the month the faculty had approved the students’ demands to establish Afro-American Studies as a distinct department.

A New Set of Demands

Looking back to 1968 today, students, professors, and alumni have varied perspectives on how fully the University has responded to each of the demands.

Many said they think the African and African American Studies Department has come a long way since its founding.

“It took years, some real fits and starts, but Harvard was lived into these ambitions to a remarkable degree,” Professor Lawrence D. Bobo, Chair of the African and African American Studies Department, wrote in an emailed statement.

“We now have the world’s most eminent department of African and African American Studies, covering the U.S., Africa, and Afro-Latin America with a strength and depth that no one else rivals,” Bobo wrote. 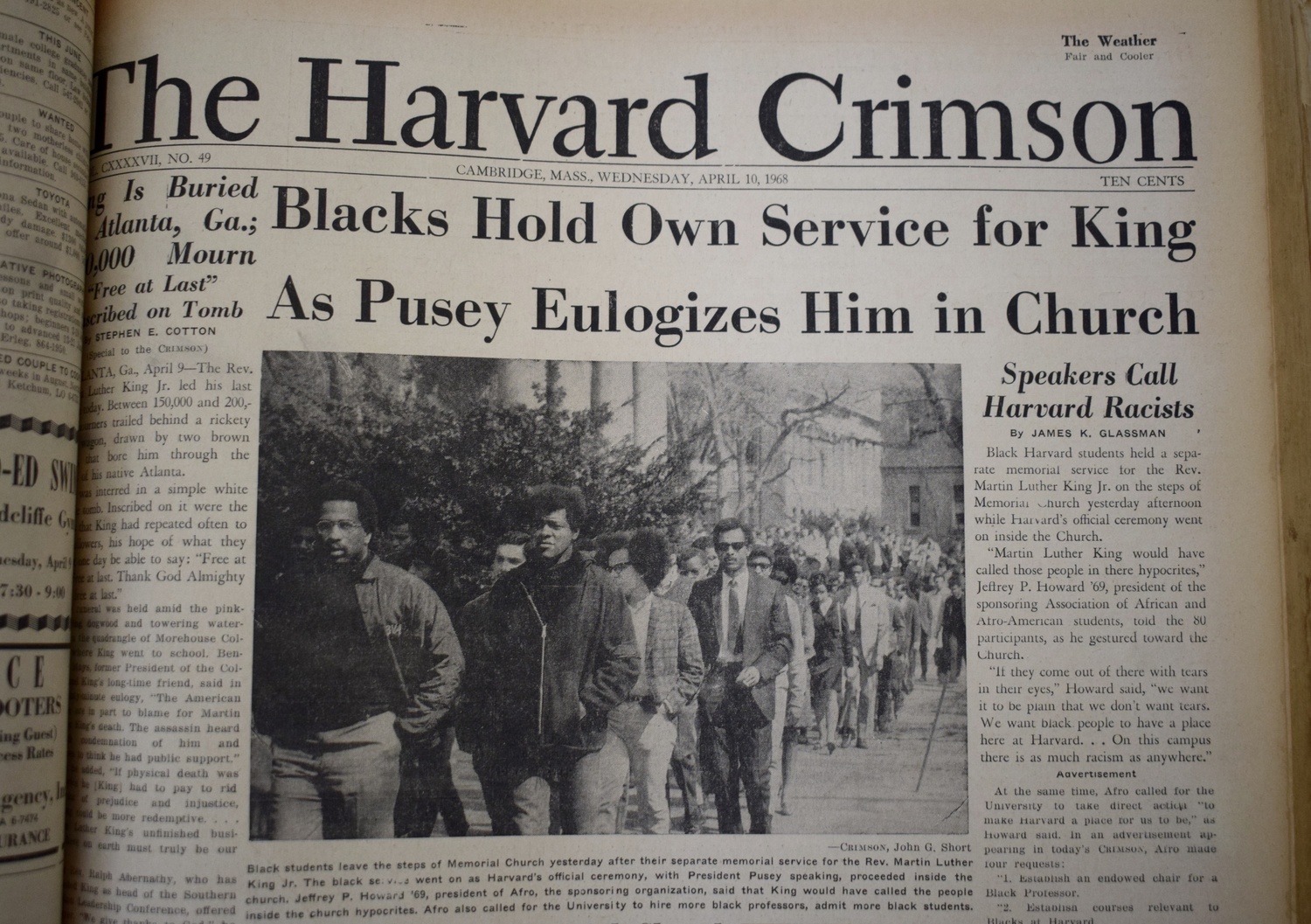 The April 10, 1968 issue of The Harvard Crimson features a story about a separate memorial that black students created for Rev. Martin Luther King Jr. By Ellis J. Yeo

“I think that the perception on campus about African and American Studies is definitely changing,” he said.

But even though the AAAS department has seen major developments, a dearth of lower-level black faculty throughout the Faculty of Arts and Sciences persists. According to the 2017-2018 Faculty Development and Diversity report, just 13 of 150 tenure-track professors in the FAS are underrepresented minorities.

As for the endowed chair, FAS Spokesperson Anna Cowenhoven wrote in an emailed statement that the University could not legally establish a chair for any “specific category of race.”

Though Hamilton acknowledged that there will never be a time without “challenges to our progress,” he said he believes Harvard has achieved the demands in the ways that he had hoped for fifty years ago when he drafted them.

“When I look at the college and the university as a whole, I must tell you, I don't know any university in the country that has done a better job than we have,” he said.

While some may believe the 1968 demands have been met, recent events have spawned new demands among black students at Harvard.

“The thing that is disturbing about Harvard today, to the extent that what I read and hear about, is that in terms of a sense of belonging, a sense of personal worth and integrity, there seems to have been a terrible backsliding,” Sheila Sinclair ’69 said.

In response to the Cambridge Police Department’s forcible arrest of a black Harvard student in April, a new activist organization—called Black Students Organizing for Change—quickly emerged.

The arrest raised concerns about Harvard’s protocols for responding to incidents like these. In a letter addressed to the “Harvard Community” and circulated on multiple email lists and Facebook, BSOC listed 10 demands outlining ways they want the University, Harvard University Health Services, and Harvard University Police Department to ensure students are kept safe when they call HUHS for help.

University President Drew G. Faust, who called the arrest “disturbing,” formed a committee in the wake of the incident to examine the events leading up to the arrest and Harvard’s systems for handling similar incidents.

Fifty years after the four demands, black students and alumni seem to share one sentiment: there is still always progress to be made. When reflecting back on her years at Harvard and looking ahead to the upcoming 50th reunion, Johnson said she still feels a drive to fight for equity, as she did while a student in the ’60s.

“In today's environment, when many people at the age of 70 would be ready to retire, I think many of us who were engaged in the movement for social justice in the sixties find ourselves recognizing that the African phrase, ‘the struggle continues’—aluta continua—is still very relevant,” she said.

“We're still struggling and we're not going to give up.”