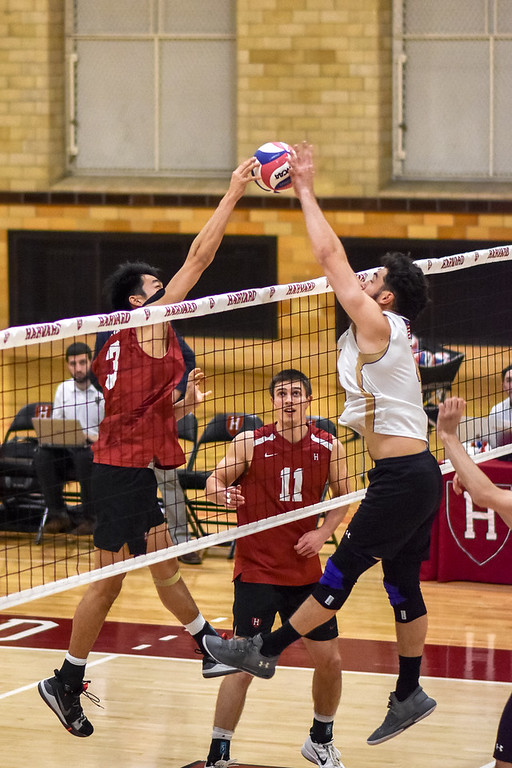 Freshman Ryan Hong blocks a hit in a contest earlier this season. Hong tabbed 13 solo blocks across the course of his inaugural season. By Quinn G. Perini
By Matthew Mu, Crimson Staff Writer

“Whenever he calls a play in Hawaiian, I always laugh to myself knowing that no one else knows the play that we’re going to run," freshman Ryan Hong said. "It’s our little secret.”

Born less than a day apart in the same hospital in Hawaii, Harvard freshmen Buddy Scott and Hong have always been side by side. From preschool and kindergarten through their senior year of high school, the two had always had one another. In fact, the two even manage to occasionally finish each other’s thoughts and sentences.

“So, we were born in the same hospital at basically the same time,” begins Hong. “We went to preschool together at Central Union and then at Punahou…”

“…we started in kindergarten together and went there for twelve years,” continues Scott. “I left my senior year but still we remained close and we started playing on the same club volleyball team in sixth grade and we were on the school team together the whole time essentially. It’s just ridiculous to think that now we’re here…”

The two volleyball players even began playing volleyball around the same time. For Scott, basketball and baseball were his favorite sports as a young child. However, by fifth grade, he had already played in the national championships. From there, joining the school and local club volleyball team was a natural decision.

Likewise, Hong’s upbringing introduced a variety of sports from a young age.

“Growing up, both of my older brothers had played football, basketball, and soccer,” Hong said. “So, I always thought I would end up playing one of those three sports. However, in fifth grade, my mom took me to a volleyball practice with a club team. At first, I really did not want to try it at all, but when I did, I absolutely fell in love with it.”

Whereas some childhood friendships remain only in memory, the two have continued to stay linked together, especially through Harvard.

“I might’ve called you or texted you [when I got into Harvard],” recalls Hong.

“I was super happy for [Ryan], but it took a while to really process it,” replies Scott.

“It wasn’t until we got here and saw each other that it felt real,” Hong said. “And honestly it has been amazing. I feel like I’ve gotten to know Buddy on a deeper and more genuine level than ever before.”

“For sure,” Scott adds. “Getting to live in Cambridge and experience college together on the same volleyball team has been a once in a lifetime experience. It’s weird that even though I’ve known him my entire life, we’ve bonded a lot more in the past year than ever before.”

Even the teammates’ parents are invested in the relationship.

“During senior year, my mom definitely asked, ‘Hey has Ryan heard back from Harvard?’” remembers Scott. “She was really excited when he eventually got in. I think my parents really like the idea that at the end of the day, five thousand miles away, I always have Ryan to turn to. Someone who I’ve known my entire life and I feel super comfortable with.”

“My parents were psyched when we heard that Buddy had gotten into Harvard,” responded Hong. “And then when I got into Harvard they were like ‘Oh my god! This really is full circle!’ They realized that we would be playing on the same team in the same school.”

“We never really played against each other formally; it would always be in practice,” clarified Hong. “Except in club volleyball. In club volleyball, when he played for a club in California, I played for a local team and we both were competitive teams that went head to head in national tournaments. It was so weird to see Buddy on the other side of the court. There’s just some Hawaiian kid I’ve known my entire life on the other side playing for a California team. But it was good competition.”

The two also have experienced drastic changes in volleyball culture in the past year.

“Not only is women’s volleyball big, but also men’s [volleyball],” Hong said. “[In Hawaii], it starts off playing in the grass and on the beach and then eventually to indoor play. That’s huge back at home. To play recreationally is bigger in Hawaii than in other places where people would normally play basketball. There’s a lot more support for volleyball in Hawaii and the culture has nurtured players to end up at the Olympics and high-level college teams. I remember in our high school, we’d have upwards of 800 people out for a game.”

“So many more people care about volleyball because the University of Hawaii is such a big thing there,” adds Scott. “Volleyball is really a big sport there. Regularly there will be 5000 to 10,000 people for a game; the stands will be completely packed. Hawaii is where beach volleyball started and there have been so many Olympians from Hawaii. It’s just a huge culture there.”

However, the two hope to grow and thrive in the northeast, both on the court and off. Both lauded the team and Harvard for presenting them with opportunities and challenges of a lifetime, noting that without one another, college would certainly be different.

“Because we spend so much time together, it’s nice to be able to talk to [Buddy] on the court, in the locker room, or out around campus about things at home or stories when we were younger,” concludes Hong. “It’s a unique bond and I’m just happy to be at Harvard here with him.”