From helping all three play at a young age to supporting them throughout the long summers of baseball, family is a thread that has always been present for the Stones.
By Amir Mamdani 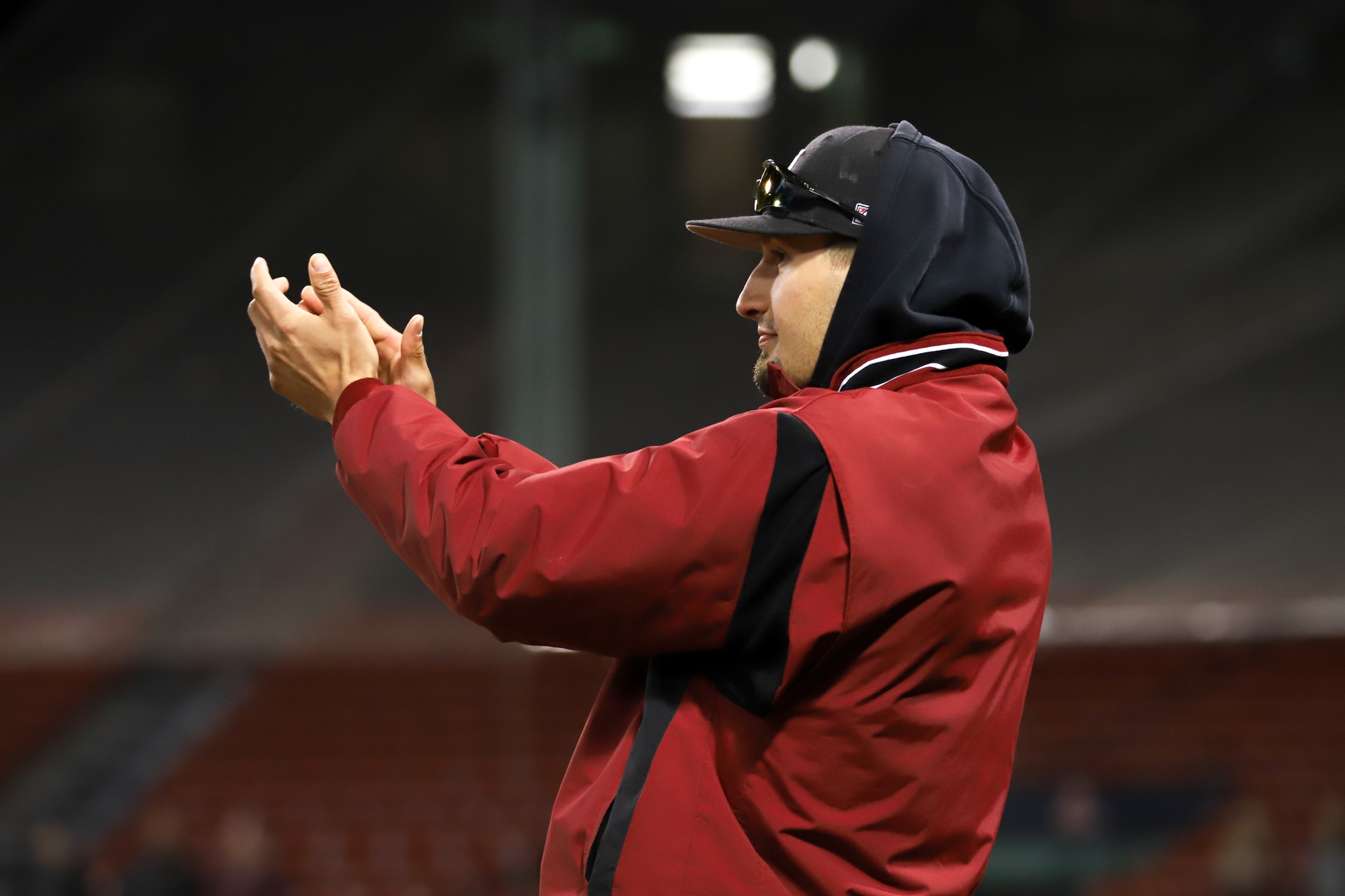 Senior pitcher Kevin Stone cheers from the dugout of this season’s Beanpot Championship at Fenway Park. By Quinn G. Perini

In a 2019 campaign that has featured so much promise for the baseball team, Kevin, now a senior, has served as the anchor and elder statesman of the Harvard pitching staff. But Kevin is not the only Stone you can find in the Crimson dugout on Saturday and Sunday afternoons, as the 6’4 right-hander is joined by his 6’6 brother, Grant.

Grant is a junior on the team with another season at Harvard yet to come, but has impressed as of late, throwing two clean innings in a 2-1 loss against Boston College in early May. While Grant and Kevin have served different roles for the Crimson, few doubt the impact the duo have, both on the on-field product of the program, but also in building a strong team culture.

“It’s really cool having two guys from the same family on the staff, I think it makes us closer as a group and definitely brought the junior and seniors together as classes,” said sophomore pitcher Jaren Zinn of the impression Grant and Kevin have made on the team. “It’s a great example for the younger guys to have both of those guys around and setting the tone.”

Both products of Fairfield College Prep. and natives of Stamford, Conn., Kevin and Grant wear the No. 25 and 26 jerseys respectively, and have appeared in 64 games across the past seven combined seasons they have pitched. The tall righties have become stalwarts in the starting lineup and out of the bullpen, even as their three years together comes to a close.

“I always say it would be weird if he wasn’t here,” Kevin said. “We’ve always played on the same teams, and it would be strange if we didn’t play together. We have always been the 1 and the 2 and always shared baseball as an experience together.”

And as Kevin departs after this season, Grant will be joined next year by the youngest of the three brothers, Adam. Adam Stone, like both of his older brothers, is a right-handed pitcher for Fairfield College Prep, helping the team to a 25-2 regular season record.

At 6’6 with impressive results thus far, Adam has the potential to be the best Stone yet — just ask Kevin.

“Just knowing that he watched us play for Harvard and had the desire and drive to be like his older brothers is really humbling and fills me with a lot of pride,” Kevin said. “He’s the younger brother who’s gonna detababley be the best of the three of us and the one who’s shown the most talent this early on.”

While it remains to be seen if Adam indeed becomes the “best Stone”, it’s clear that the Stone brotherhood is a bond whose strength is appreciated by the entire staff.

“Kevin always has his brother’s back, and you see him giving Grant advice and different times, and that’s really cool to see,” Zinn said. “They played summer ball out in California together after Grant’s freshman year, and they have a really cool brotherhood.”

This culture of baseball, and its day-to-day impact on the next generation of Stones is hardly an accident. All three brothers pitched in Little League and in the summers from a young age, helping sow the seeds for a seven-year college dynasty.

“We’re a baseball family, it’s just like part of the household. We’re Red Sox fans, my mom played softball pretty competitively growing up, so for us to show some talent in baseball early on fired them up,” Kevin said. “We grew up with it, it was our lifestyle from the spring all the way through the fall.” 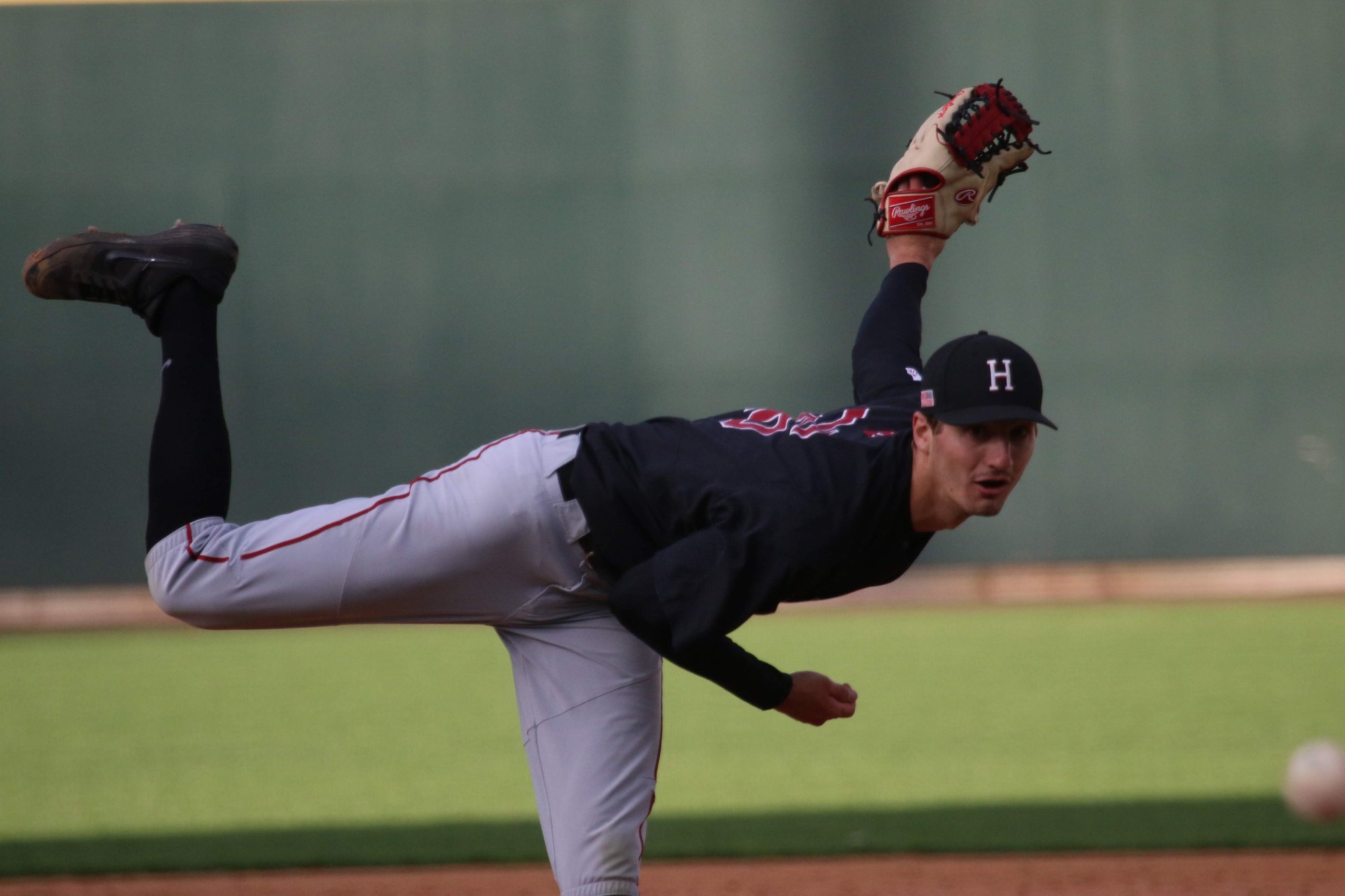 Junior Grant Stone will be joined next season by his younger sibling, Adam. By Courtesy of Grant Stone

The Stone family, who can be seen in the stands cheering on Kevin and Grant, have played a significant role in the careers of all three brothers. From helping all three play at a young age to supporting them throughout the long summers of baseball, family is a thread that has always been present for the Stones.

“It’s so special and my parents are super proud of the three of us, making them proud is a goal for all of us,” Kevin said. “After having them say they’re proud of us after watching us play for a weekend is one of the most peaceful feelings, it’s such a blessing.”

While Adam is set to arrive on campus in the fall, as commencement approaches the focus is firmly fixed on Kevin, as the fourth-year Government concentrator prepares to leave the program. He has started 33 games on the mound for the Crimson, including a Beanpot Championship victory, and an Ivy League Championship series game, but much of the impact the senior has made on the team takes place off the diamond.

“He’s always someone I can go to if I need help or advice,” Zinn said. “He’s always there for everyone and has been an unbelievable leader for us, and a truly invaluable member of this team.”

In his four years at Harvard, Kevin Stone has gone 14-10, with four complete games in regular season action. He has thrown over 175 innings for the Crimson, and will graduate as the only true four-year starter on the pitching staff. And perhaps most importantly, he helped lead Harvard to its first Ivy League Championship series and outright regular season title since the 2004 and 2005 seasons.

But if you ask him, he’d sure to say that playing with his brother, Grant, has meant more to him than any of those statistics. And although Kevin won’t get the opportunity to share the dugout with Adam, he is very aware of how unique an experience he and his brothers have been a part of.

“It’s super cool and you try not to be cocky and prideful about it, but it’s something that’s really special,” Kevin said. “It’s going to be awesome to watch Adam throw with G, but just knowing that we’ve all shared these years is really incredible.”