Double-Clutch: Harvard Men's Basketball vs. Columbia, Game of the Year

The shot became a bigger story than the eventual victory itself, as Aiken’s play was the opening highlight on Friday night’s 11:00 pm SportsCenter, and earned ESPN’s Top Play of The Night.
By Amir Mamdani 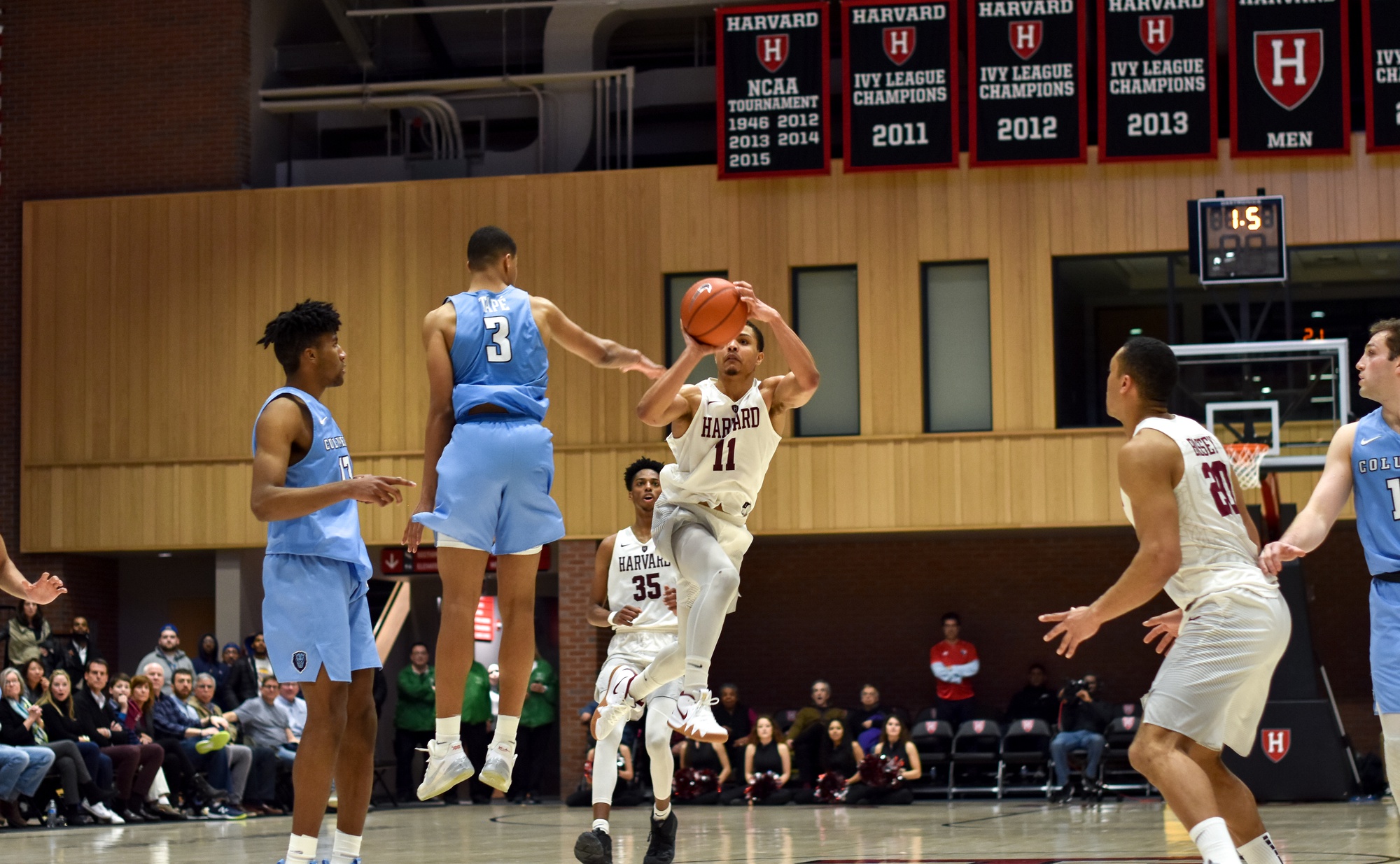 Aiken tallied a career-high 44 points in the triple overtime thriller over Columbia. By Quinn G. Perini

On February 8, 2019, a sold-out Lavietes Pavilion crowd of 1,636 people witnessed the most remarkable game that Harvard basketball played in nearly a decade. In a tintillating triple overtime classic, the Crimson held on to win by a 98-96 score, vaunting their conference record to 4-1 at the time.

The contest featured two stunning buzzer beaters — one by Columbia’s Gabe Stefanini to send the game to overtime, and the second by junior guard Bryce Aiken. Aiken drilled a double-clutch triple from well beyond three-point territory to send the game to double overtime, one of the greatest individual moments in recent Harvard history.

“It was the luckiest shot of my career,” said the junior of his heroics against Columbia.

The shot became a bigger story than the eventual victory itself, as Aiken’s play was the opening highlight on Friday night’s 11:00 pm SportsCenter, and earned ESPN’s Top Play of The Night. The three-pointer became the focus, but Aiken’s performance was a night for the ages in all respects.

The Randolph, N.J., native scored 44 points, one shy of a program record, and was the key cog in the Crimson’s first triple overtime contest since the 2009 season, when Jeremy Lin hit a buzzer-beater to beat William and Mary. Aiken scored an impressive 18 consecutive points during the first and second overtimes, the strongest single-game performance for No. 11 in what was a career-best season.

The victory was Harvard’s seventh consecutive overtime triumph, and improved the team’s record to a remarkable 17-4 in overtime games under Coach Tommy Amaker. Amaker credited the team’s victory to the grit and determination exhibited by Aiken and the rest of the team over the final 15 minutes of extra basketball.

“There is something to say about having the will just to keeping fighting and the will to win,” said Coach Amaker after the game. “It was just a sensational performance certainly by Aiken at the start. He put us on his back and carried us to the finish line.”

And while the Crimson would later secure the regular season Ivy League title against Columbia in another pulse-racing contest in Morningside Heights, the triple overtime stunner was unquestionably the most exciting game Harvard played all season. The win also had symbolic significance for the program, as the palpitating contest was the Crimson’s 300th victory within the confines of Lavietes Pavilion.

Beating Columbia helped Harvard extend its win streak to five, as part of an eight-game stretch in which the Crimson would go 7-1, vaulting the team into the driver’s seat of the Ancient Eight standings. And although Harvard and the team’s tired legs would fall against Cornell the next night — the team’s first and only Ivy League loss at Lavietes — the win over Columbia was the exclamation mark on an excellent spell of conference play.

Aiken’s strong effort was not the only standout performance in the triple overtime contest. Junior wing Justin Bassey recorded a double-double, scoring 17 points and securing 10 rebounds. The Denver, Colo., native knocked down all four of his free throws and was a key cog in stopping the Lions from tying the game late.

“This was the definitely one of the best games I’ve ever been a part of or seen,” said Bassey in the post-game press conference. “Just got to enjoy it, enjoy the moment and everything that comes with it.”

Fittingly, on a night in which he was the star of the show, it was a pair of free-throws from Aiken that would seal the game.

With highly touted recruit Chris Ledlum and a talented recruiting class joining forces with rising seniors Bassey, Chris Lewis, Christian Juzang, and 2018 Ivy League Player of the Year Seth Towns, the Crimson will again set its sights on making the NCAA Tournament for the first time since 2015. With the team hosting the Ivy League Tournament in 2020, Harvard will surely be a strong favorite to finally reach the NCAA Tournament.

Regardless of what transpires next season, it is hard to imagine a more thrilling moment in the career of No. 11 than February 8th, the night Aiken scored 44 to help the Crimson win in triple overtime.