At the end of the season, she earned multiple honors, including First Team All-Ivy, ECAC All-Rookie Team, Second Team All-ECAC, and ECAC Goalie of the Year Finalist.
By William C. Boggs 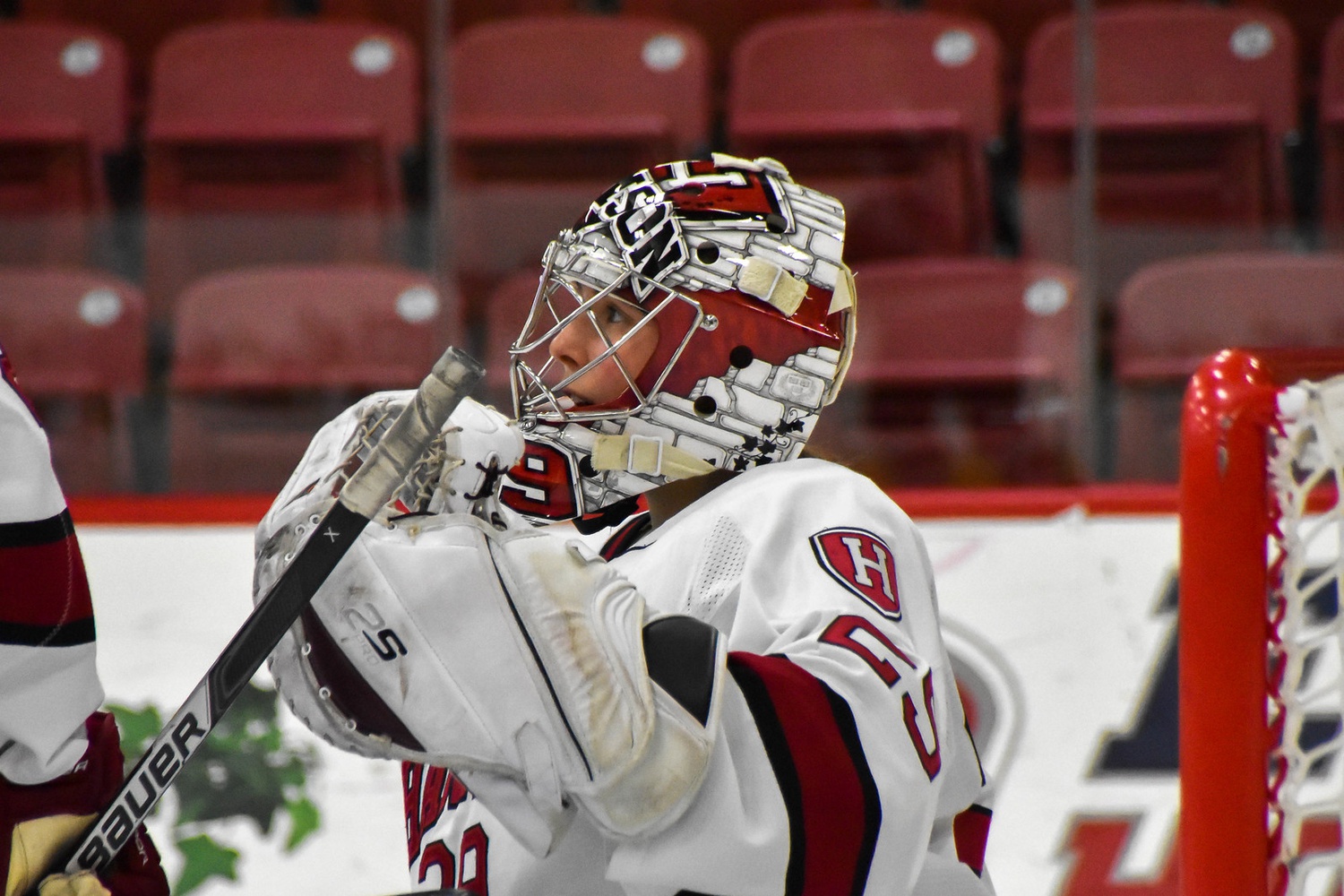 Facing a combined 986-shot barrage in her 27 appearances, Reed had to stay laser-focused over the course of any game. By Quinn G. Perini

Goaltender Lindsay Reed may only be a freshman, but she played the past season as if she had years of experience at the Division I level. In her rookie campaign, she took the ECAC by storm, setting the program single-season saves record (927) and stifling 30-plus shots in 17 of 27 appearances.

At the end of the season, she earned multiple honors, including First Team All-Ivy, ECAC All-Rookie Team, Second Team All-ECAC, and ECAC Goalie of the Year Finalist. At the national level, she made a major impact as well. Among all Division I goalies, she tied for third in the nation in save percentage at 0.940, deadlocked with redshirt junior Kristen Campbell of the eventual national champion Wisconsin Badgers. Moreover, Reed was within just 0.004 of the number-one spot, which belonged to Terra Lanteigne of Rochester Institute of Technology.

“To have this honor [the top-three save percentage] my first year, it’s a huge privilege, and I’m extremely proud of it, but I can’t wait to see where we go from here,” Reed said.

While sharp technique and physical tools played a huge role in her success this season, women’s ice hockey coach Katey Stone reflected that Reed’s mindset contributed a critical edge to her game.

“Lindsay’s an incredible competitor,” Stone said. “We’ve had awesome goaltenders in the past, and what separates them from others is their just incredible focus, and competitiveness, and preparation. We knew what we were getting when we were in the recruiting process, [but] I didn’t anticipate she would have the kind of year she had this year.”

What’s more, Reed seemed to relish the big-game atmosphere, wanting the opponent to throw the kitchen sink at the net. Regularly facing 40-plus shots, she welcomed the challenge.

“Honestly, it’s fun,” Reed said. “That’s really what it comes down to...Knowing that these teams are coming in, and they’re going to take 50 shots, to see them get frustrated and not scoring, in the end, that’s just fun.”

Indeed, this mentality proved crucial in many games, but especially during the Beanpot tournament. Over the course of the two games—an upset victory over Boston College in the semifinals and an overtime loss to Boston University in the championship—Reed totaled 103 saves while surrendering only four goals.

With the bar set so high from the past year, a unique challenge for Reed will be continuing to improve. With that in mind, she is committed to attention to detail over the summer. 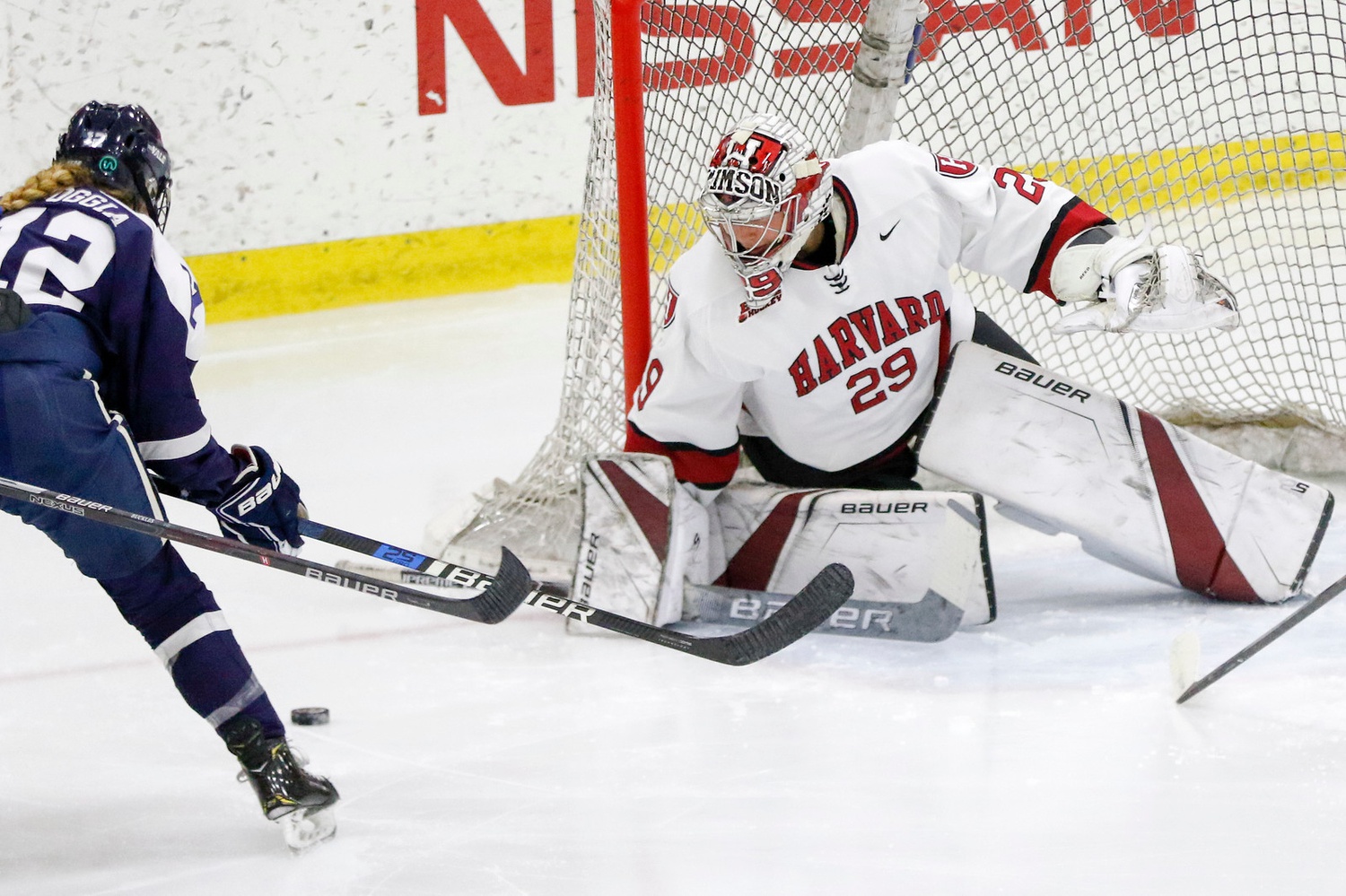 Reed seals off the post as an opponent tries to edge the defender for a net drive attempt. By Timothy R. O'Meara

“[The focus will be] working on my off-ice training, watching video, reworking my angles, and becoming more explosive off the ice so that it can translate on the ice,” Reed said. “Obviously, I don’t want to plateau or anything. I want to keep getting better.”

In addition to refining physical technique, Reed knows that continuing to hone the mental game will be another offseason key.

“I think I’m pretty level-headed when it comes to the big games,” Reed said. “But then, when it gets down to the wire, I think, personally, staying calm and collected will really help improve my game.”

With her numbers this season, Reed attracted the attention not just of opponents, but also of USA Hockey. Reed has appeared for the national team before, earning gold medals at the world championships on the U18 national team in 2017 and 2018, so her play this year only reinforced her position wearing the stars and stripes.

In May, she attended the Women's National Team Goaltending Camp in Plymouth, Mich., earning one of 12 selections to a roster that included 2018 Olympic gold medalists and 2019 world champions. Notably, Reed was not the only Harvard goalie selected, as junior Beth Larcom was also chosen among the 12, showcasing the Crimson’s depth at the position.

“She [Reed] deserves it—simply,” Stone said. “If she hadn’t been selected, I’d be concerned because of the kind of year she’s had. The numbers speak for themselves.”

Undoubtedly, competing at the international level has already given Reed invaluable experience that has boosted her Harvard career. This camp was no different in the unique opportunity that it offered.

“This weekend’s really cool, and it’s a huge honor to be a part of this group,” Reed said. “I’m with the Olympians and people who have been on the national team; to be the young one learning from them is awesome.”

For the Crimson women’s team as a whole, after gaining significant momentum with a February win streak and a Beanpot title game appearance, expectations should be high. A strong core of rising sophomores and rising juniors will return, complementing a talented incoming recruiting class, not to mention that Reed should backstop the program for another three years.

“We’re excited about the future of our program,” Stone said. “We’ve got some great character kids in our program. We’ve [just] got to put it together, and we’ve got to stay healthy.”