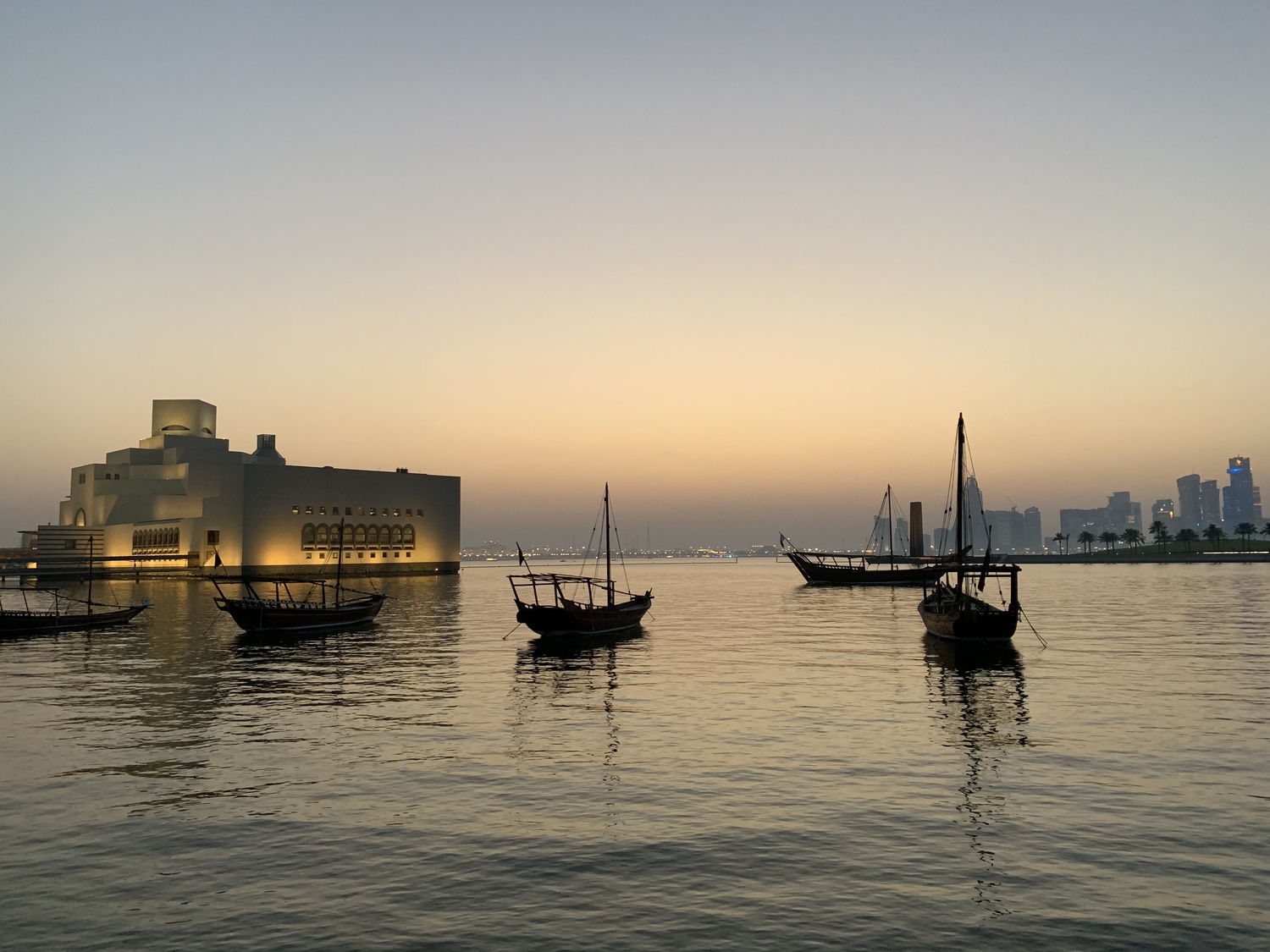 DOHA, QATAR — The porters exchange bemused grins and wish me a pleasant evening stroll. The first time, I worried it was my outfit: a skin-tight t-shirt and skimpy polyester shorts that are definitely too short to be culturally appropriate. After dodging threads of pungent shisha and sidestepping six lanes of traffic, I stretch my calves on the shore of the Persian Gulf.

I schedule my runs for just after sunset, when the temperature has fallen at least below 100 degrees Fahrenheit — maybe down to 95 on a particularly cool day. It’s so hot that even most locals flee the Middle East to escape the summer sun. So my zealous rejection of air-conditioned gyms and state-of-the-art fitness equipment tends to raise some eyebrows.

Jumping over a few bushes (and nearly stepping on some stray cats), I arrive at the Corniche. This seven-kilometer promenade bustles with life after dark: pick-up matches of ping pong, toddlers on tricycles, and young men peddling salty snacks. Couples sit to chat on concrete steps, and a few kids take a dip in the turquoise seawater. Many smoke, a few cast lines for harmour or lukhma, and most sip cups of steaming karak — the ubiquitous local chai masala analog, spiced heavily with cardamom. I still don’t understand the custom of drinking hot beverages, but these folks are the world experts in surviving extreme heat; I trust their judgment.

There’s sort of a cooling effect, paradoxically, that comes with picking up speed. The rush of marine air is like a whirling fan, the force of which varies directly with the firing of my quads. I lean into the last 100 meters and pause to sip cold water with the towering maroon-and-white figure who welcomes me with a torch. Orry the Oryx, mascot for the 2006 Asian Games, directs a pensive gaze toward the desert from his pedestal on the Corniche.

Qatar didn’t send a contingent to the first Asian Games in 1951. In fact, Doha was then the size of my rural Wisconsin hometown, aching from the demise of the pearling industry. But almost overnight, the House of Al Thani traded docks of dhows and divers for a booming port of oil tankers and petroleum roughnecks. Up from the Arabian sand sprouted a futuristic metropolis, complete with architectural masterpieces designed by the likes of Jean Nouvel and I.M. Pei. Qatari citizens — who compose about an eighth of the population here — are now the richest people in the world, and their consumption is as conspicuous as I’ve ever seen.

It’s nearly asphyxiating; a blast of humid air rolls over the bubbling, gurgling, emulous waves. I down the dregs of my bottle, toss it in the recycling bin, and turn toward the motley skyline for a sweaty trot back to my hotel.

What keeps me coming back to the Corniche every night is — unlike at the palatial malls, carved out of Italian marble, or the lavish eateries where we take our business lunches — a coming-together of all who call Doha their home. I run past locals draped in their white thobes and black abayas; tourists en route to Europe, Africa, and East Asia; expats lured by the promise of lucrative contracts; and hard hat-clad construction workers who toil around the clock to erect skyscrapers and World Cup stadiums. Within a society marked by stark inequality, all converge for karak and conversation at the edge of the Gulf.

“The rich and the poor meet together: the Lord is the maker of them all.”

A familiar yellow sign — an invitation for milk tea — illuminates the impeccably manicured park and signals my arrival home. Tomorrow night I’ll remember to carry a few extra riyals for a hot cup, sprinkled with saffron threads, from Karak Spicy.