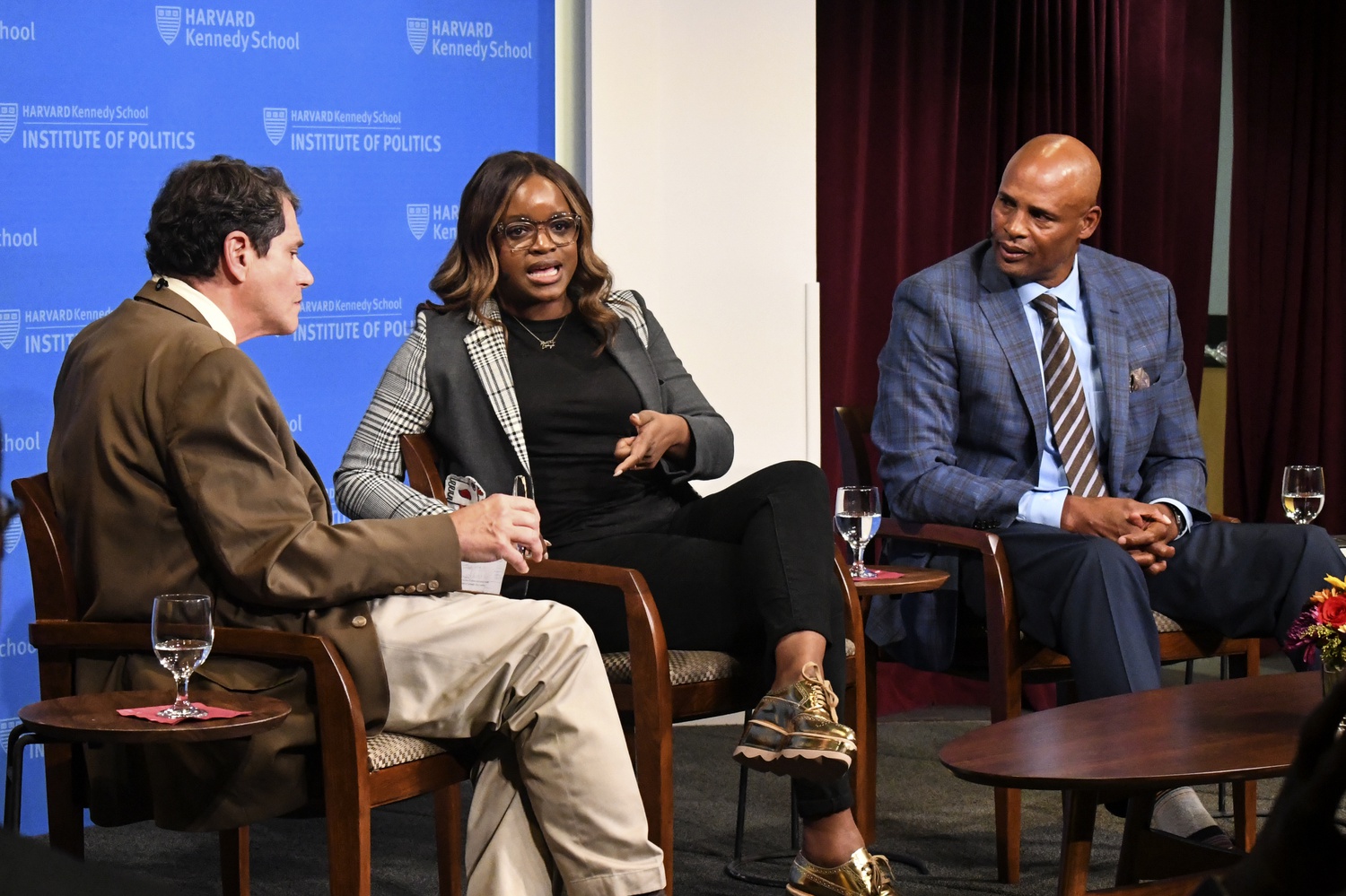 Former IOP fellow Brittany Packett, and former NBA player Clark Kellogg discuss the power of sports and the positive influence athletes can have on their community at an Institute of Politics event Tuesday night. By Naomi S. Castellon-Perez
By Ellen M. Burstein, Crimson Staff Writer

Kellogg and Packnett, in conversation with Peter A. Carfanga, a Harvard Law School lecturer, discussed the role that race, gender, and socioeconomic identity play in sports.

One audience member asked the panelists about their advice for athletes who face professional repercussions for speaking out about social issues.

Kellogg stressed the importance of believing in one’s cause before speaking out.

“I think anytime you’re going to engage in activism, that you have to do it from a place of great conviction,” said Kellogg.

“You need to have courage if it’s going to be painful or difficult and you need folks around you that can help you,” he added.

Kellog also discussed how athletes and other prominent popular culture figures should evaluate their collaborations with athletic leagues embroiled in controversy, in particular focusing on musician Jay-Z’s partnership with the National Football League.

In 2016, Colin Kaepernick, a former player for the San Francisco 49’ers, began protesting the United States national anthem by sitting or kneeling when the song was played before games. His actions prompted players around the league and across the country to perform similar gestures at the start of games.

Two years later, following heavy criticism of the protest from President Donald Trump, the NFL banned players from kneeling during the national anthem.

Kellogg noted that it is “to be determined” what will happen with Jay-Z’s partnership moving forward, but said that those with influence have an obligation to use it responsibly.

“There’s always greater responsibility with greater privilege, and individuals have to steward that as their conscience and convictions guide them,” Kellogg said.

Packnett added that she wishes Jay-Z would have spoken to Kaepernick before entering into the partnership.

Representatives for Jay-Z did not immediately respond to a request for comment Tuesday evening.

“I think it’s especially relevant being women of color and being in sports to hear kind of how we can move the needle and influence people to care and to be knowledgeable about issues of inequality,” Bush said.