The Calling or Denial of Art 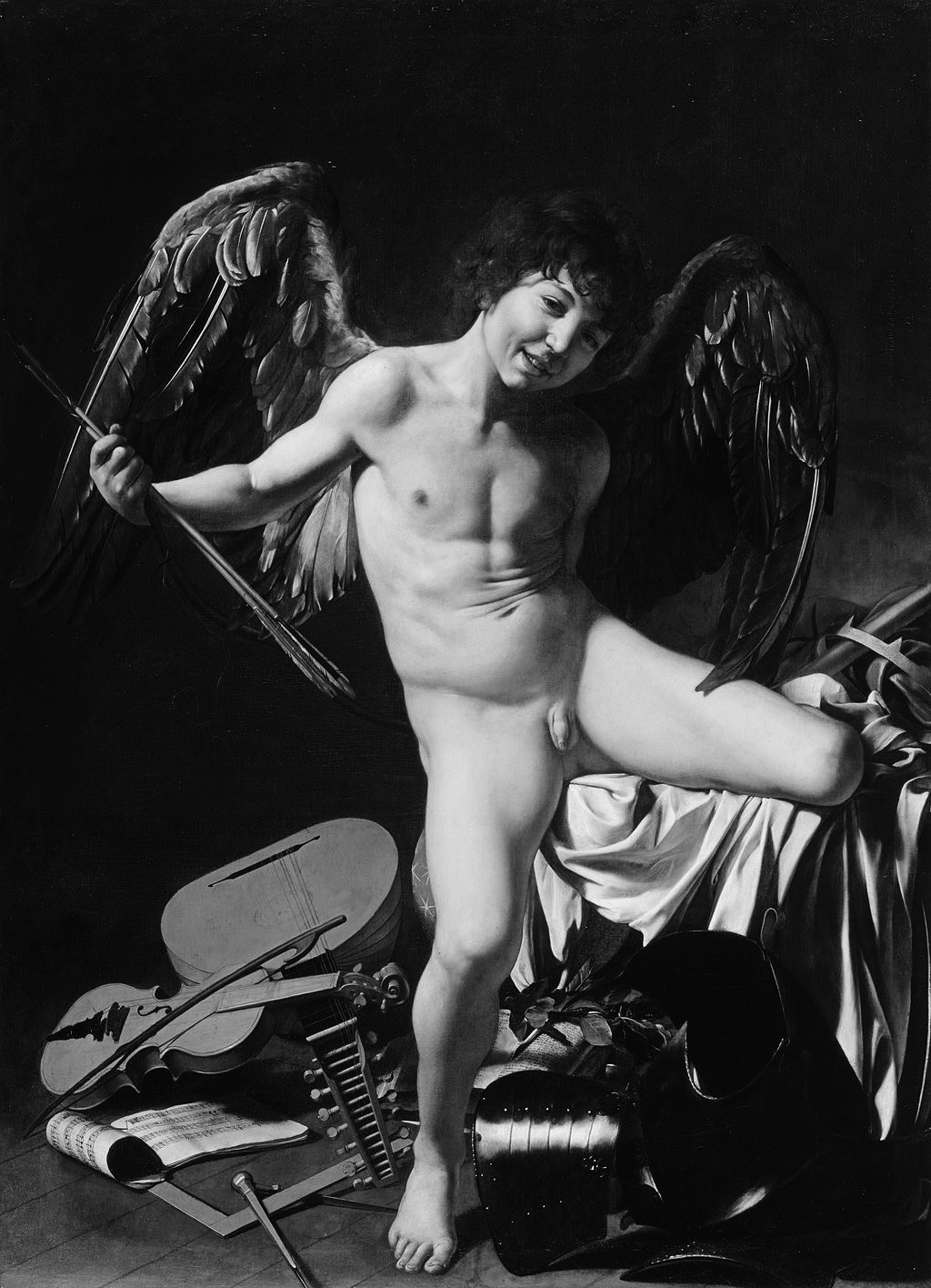 There stood a naked young boy with the wings of an eagle, holding arrows of love, destined for the aching hearts of lonely individuals everywhere. The V formed by the arrows and the tip of his left wing point directly at his genitalia, an indication of the sexually playful undertones of this piece. The fallen violin, lute, and open compass further convince the viewer of Caravaggio’s subtle emphasis of the V, a reminder of carnal pleasures. And with Cupid captured in an awkward yet potentially classically inspired position, Caravaggio’s “Love Conquers All (Omnia Vincit Amor)” captured my attention due to its secular depiction of Cupid in the era of the Catholic Counter-Reformation.

Initially, it might seem that “Love Conquers All” puts it all out there and that his piece isn’t an enigmatic mystery requiring an understanding of Vincenzo Giustiniani, the commissioner of the piece, or an understanding of his rivalry with Giovanni Baglione. If you look closely enough, observing this playful young Cupid and his surroundings with enough attention, you just might be able to draw your own conclusions on Cupid’s true nature. There’s a basic meaning that all viewers can grasp from this masterpiece.

Yet a part of this piece’s real splendor lies in the subtle connections it draws to other pieces of art. Is that black armor besides Cupid’s feet from another of Caravaggio's paintings? The soldier grabbing Jesus by the arm in the “Taking of Christ” dons a cuirass of the same shape and color. What about the lute’s uncanny resemblance to that of Caravaggio’s “Lute Player,” painted nearly half a decade before? Are they in fact the same lute? We may never know for sure, but certainly his piece drew me in, made me think about his other pieces, and allowed me to better understand him as a painter. To understand a piece at its deepest levels might just require more than an eye for detail.

As a result, for me, viewing art has always been treacherous: It felt like a scholar’s activity, trying to understand the hidden meaning behind layers of paint upon a single canvas. My fairly limited knowledge of Caravaggio far exceeds my knowledge for any other artist, and certainly without it, I couldn’t have drawn those connections. What purpose do we have for viewing art when grasping for understanding is so daunting and academic?

Ultimately, Baglione’s “Sacred Love and Profane Love” convinced me that viewing art in museums isn’t meant to be a complex, scholarly endeavor, but a straightforward one. Seeing “Sacred Love and Profane Love” immediately after Caravaggio’s “Love Conquers All,” it almost seemed like Caravaggio’s Cupid lies at the mercy of Baglione’s “Sacred Love” — one love conquering the other. One might second-guess themselves if that connection really exists or if both pieces just happen to employ similar-looking models. But that connection is precisely what these two pieces urged me to make: Baglione’s piece, painted just months after Caravaggio’s, is meant precisely to remind the viewer of Caravaggio’s masterpiece — if anything, it is a mockery of Caravaggio’s work.

But more generally, entering a museum and seeing a list of paintings from their gallery, I couldn’t possibly know enough history about every piece to identify artistic rivalries, remember commissioners, and know underlying relationships between paintings — but that’s precisely the point of a museum. Museums bridge the gap in understanding so that I, as a viewer, can intuitively draw connections, recognize similarities, and draw conclusions. Curatorial teams have devoted hours to perfecting the experience for every viewer.

At the Gemäldegalerie, a museum in Berlin, I found both these works juxtaposed, deliberately placed within view of each other for the museumgoer to see their relationship. There’s an additional layer of depth I might never fully appreciate, but I know that if I look closely enough, observing the piece down to its brushstrokes and being careful to look at paintings in the context in which they are placed, at least I’ll see something. An art piece in a museum is meant to be an experience built around the viewer: For a basic understanding, our eyes are enough.