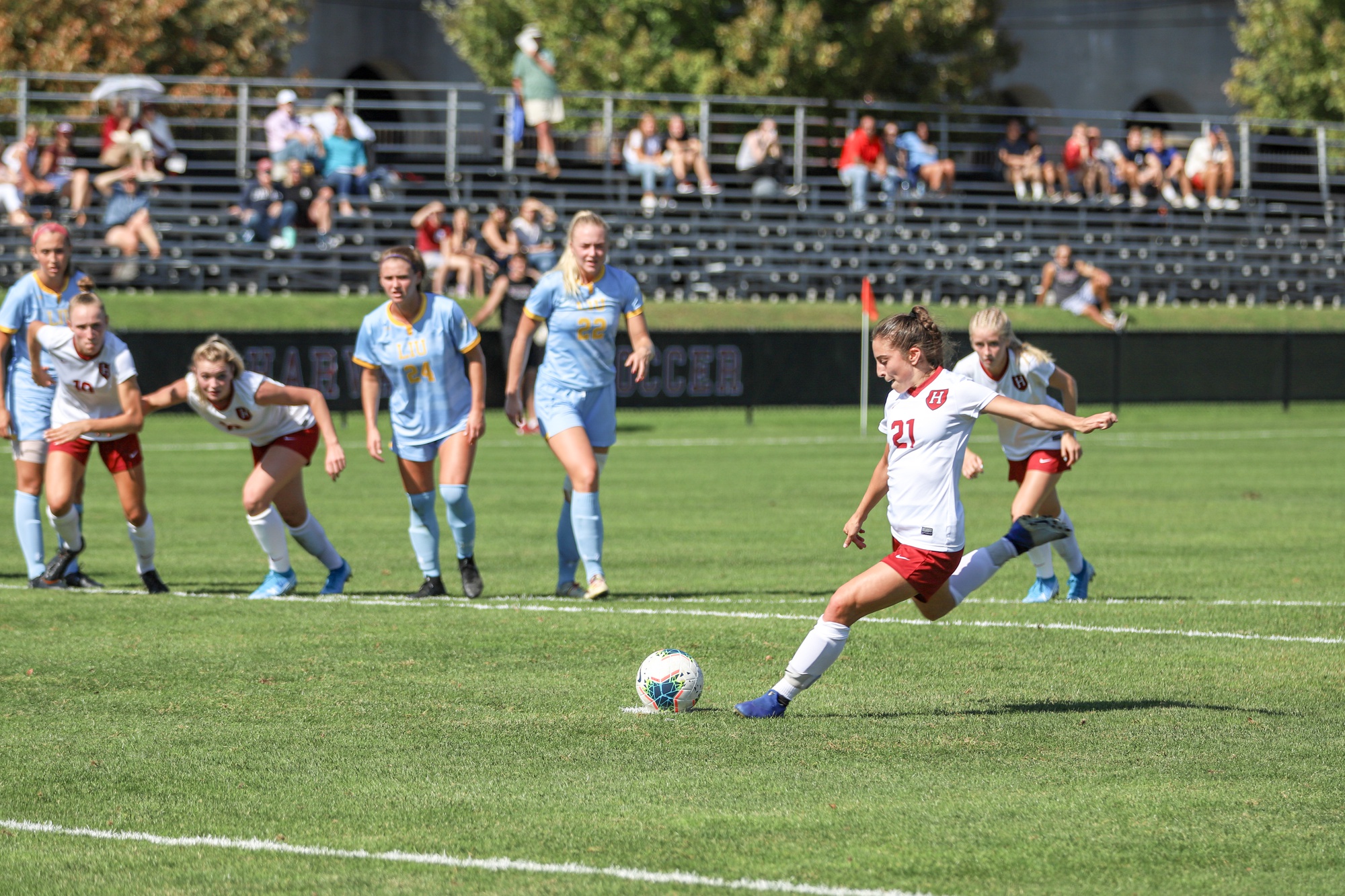 The Crimson cruised to a weekend win over LIU. By Quinn G. Perini
By Ben Morris, Crimson Staff Writer

With conference play just around the corner, the women’s soccer team seems to be hitting its stride perfectly, and it could not come at a better time. With a dominant 5-0 shutout win over Long Island University (1-7-1) on Saturday, the Crimson moved into third place among Ivy League schools–falling just behind Dartmouth (7-1) and Brown (6-1-1).

Even more impressive, though, has been Harvard’s performance in the past three games to conclude non-conference play. In the last week, the team has defeated the University of Connecticut (4-3-1), UMass Lowell (1-6-1), and Long Island University–outscoring the three with a combined score of 12-2 (21-10 on the year).

“As a team, we feel like we are in a really good place right now,” said sophomore midfielder/forward Sophie Hirst. “We’ve hardly had time to practice the last few weeks since we have had so many games, so we’ve had to fix most of our problems on the fly. Now that we have an understanding of what we do well and what we need work on, we have a whole week of practice before we kick off Ivy season with Penn next Saturday.”

The victory against LIU marked the third shut out of the year for the Crimson. The combination of continual solid play from both the offense and defense, as well as the goalkeepers, is going to make Harvard a very difficult opponent to most teams, especially if it continues to improve and play at the recent pace it has been. It is clear that these past three games have set a precedent for how good this squad can actually be.

“I think the three-game win streaks speaks to the fact that the pieces are starting to really come together,” said first-year forward Angela Caloia. “We all knew that we had great potential, but now the chemistry is starting to really materialize and being on the field is more fun every time. We’ve been at it for a full month now, and every game we’ve been focused on fixing all the details that could’ve been better the game before. I think that above and beyond the results, the past three games have shown that we’re been able to dictate our style of play against different opposition.”

The LIU game opened with a lightning-quick pace, as Caloia netted a goal just over nine minutes into the game. Caloia has continued her impressive start to the season, as she now leads the team in total points (16), assists (8), and is tied with Hirst for the most goals (4). Less than five minutes later, first-year midfielder/forward Gabby DelPico added another goal, giving the Crimson an early 2-0 advantage.

Shortly into the second half, Hirst tapped in her fourth goal of the season on a nice center from first-year midfielder Hollyn Torres. Despite building a relatively comfortable lead, Harvard had no intention of slowing down or taking any chances by leaving the game in doubt. In the 61st minute, Caloia drove by the LIU defense and, with a beautiful cross, fed junior forward Murphy Agnew to set up another goal. Finally, the Crimson capped off its scoring barrage (all five of which came from different players) with one last goal from sophomore forward Trinity Thomas.

Despite the abundant success this year, the team knows it still has a long way to go. “Heading into conference play, obviously our goal is to win the Ivy League and advance to the NCAA tournament, but that can’t happen without the whole team committing to do the thing they do best for us,” said Hirst. “If we stick to our roles and be the best at what we do best, we know our team can be great. For me and our forwards, that’s continuing to work together on and off the ball, taking people on and being creative, creating lots of scoring opportunities.”

Harvard is well aware that many large challenges still lay ahead, but rather than dwell on potential difficulties, the team is getting more and more excited to prove itself this season and continue its success into Ivy League play. “Everyone is buzzing and it feels like all of the work we’ve put in is about to be tested,” said Caloia. “Honestly, I’m looking forward to all of our games, but right now the full focus is on Penn this Saturday. It’s a massive opportunity to start conference play on the right foot and make a statement about who the team is and what our goals are for the season.”

The play as of late has had fans buzzing about the potential this team has for an exceptional year, and it seems like with every player being on the same page and improving every game, the sky is the limit for the Crimson.