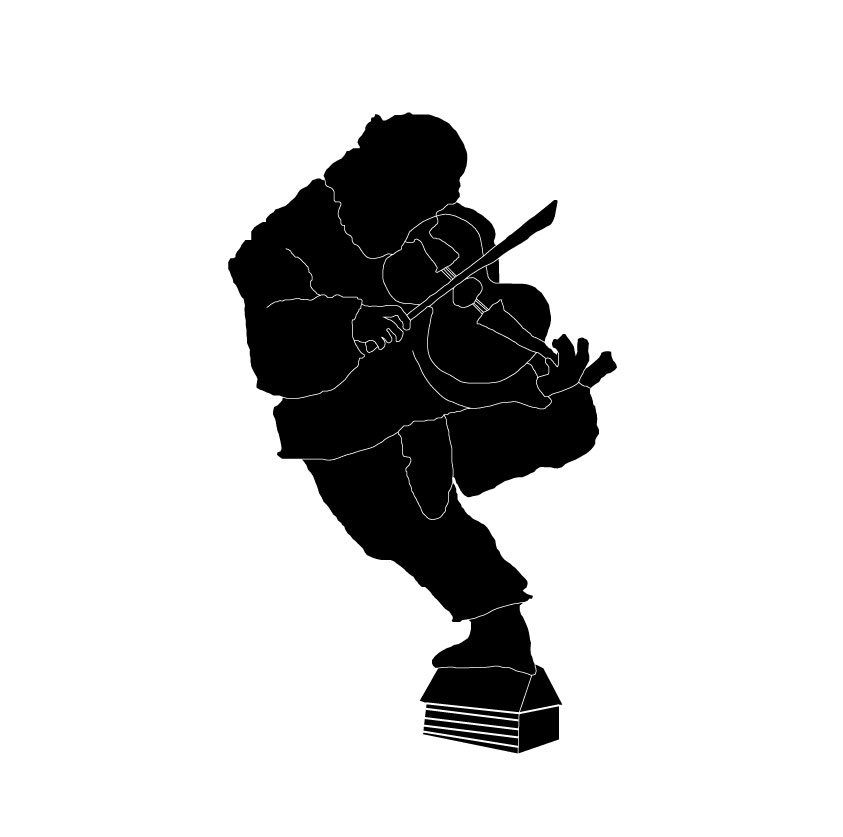 That I Can Tell You in One Word

The play is exactly what its pitch promises. Fiddler Afn Dakh. The Fiddler you know, but — to most who are not obscure intellectuals or devout Orthodox Jews —  less intelligible. So why is everyone so obsessed with it?
By Eliya O. Smith

At an off-Broadway theater in midtown Manhattan, performing eight nights a week with a closing date yet to be announced, runs a surprise success: Fiddler on the Roof.

Of course, Fiddler on the Roof as performed in its usual schmaltzy American English has been a reliable commercial hit in this country since its Broadway premiere in 1964. The current off-Broadway production’s bewildering success lies not in its title but in the parenthetical: that it is performed entirely in Yiddish.

The production began as part of the regular season of the National Yiddish Theatre Folksbiene, a 104-year-old troupe whose 21st century mission is to preserve a dying Yiddish language and culture: Yiddish theater’s last golden age in America ended with the twenties, and Yiddish all but disappeared from stages globally when the vast majority of the language’s speakers died in the Holocaust.

Folksbeine generally sticks to small-scale shows at its Battery Park location, but Fiddler in Yiddish sold like crazy. It extended its run, which sold out again. Then it moved off-Broadway, where it continues to sell, and is currently in the midst of an open run — this play whose set consists of little more than a large white cloth hanging down like a ragged curtain, bearing the letters that spell “Torah” in Hebrew.

The play is exactly what its pitch promises. Fiddler Afn Dakh. The Fiddler you know, but — to most who are not obscure intellectuals or devout Orthodox Jews — less intelligible. So why is everyone so obsessed with it?

The first time I saw a performance in a language I could not understand, I was in Krakow, traveling with my theater classmates on the annual Theater, Dance, and Media-sponsored trip. Plays capped off our overstuffed days spent whisked between museums, historical sites and acting classes, all the while trying not to inhale too much of the stale anti-Semitism that wafts through the city. I sat through the evening performances in an overstimulated stupor, not minding so much that nothing made sense.

When I think back to the plays we saw on that trip, I remember a collection of images: an old woman hanging from her wrist, twirling in space; lines of footless shoes; a gravelly disembodied voice echoing across an empty stage.

Without even a few familiar words to cling to, detachment from the action was inevitable. Like trying to interpret a puppy’s psyche based on the alignment of its ears or the stiffness of its tail, such an endeavor requires patience and intuition and mostly a making of peace with the fact that the narrative you string together in your head will likely bear little resemblance to the one crafted by the playwright.

It is clear when the play zips forward, when its rhythms become staccato, intense, when they stretch. The audience holds its breath and so do you, making holy a moment that you could not possibly explain afterward. But embodied emotions are more difficult to interpret than you would think. Yearning looks too much like regret; tears leak out at every emotional extreme.

Since Poland, I have developed an unwitting habit of consuming these performances, in which starchy voices shout in unfamiliar languages. Sometimes there are subtitles or supertitles or a friend whispering plot points in my ear, in which case I receive an actor’s delivery of a text and after a delay, assign it meaning — an oddly fractal experience of human expression. Other times the sounds are entirely unfiltered and unfamiliar.

At these plays, my analytical abilities resemble something like a twitching camera lens, either zooming in to microscopic detail or stretching out to capture a landscape. The blobbish arc of the play is refreshingly apparent, as are the minutia I would normally miss: the ceramic cat waving in a window, the slippery trails of blood oozing gently across the floor into Rorschach-esque patterns, the sultry trail of cigarette smoke threading its way toward the ceiling.

It is alienating to see plays this way, unable to situate myself at a normal vantage point to the action. But it’s also a satisfying release from my normal mode of consuming theater, in which I must fend off the self-imposed pressure to track every detail.

I see plays in other languages when I do not want to give them the satisfaction of preying on my emotions, my empathy. When I watch from a safe remove, a play cannot do that nasty trick where it makes me feel bad for a protagonist that commits evil (because, in case you did not know, morality is complicated) or twist me into a puddle of goo when actually I am in the mood to control my own emotions and stick to cold analysis, thank you very much.

This anti-feelings mantra is not the sort of attitude with which I usually approach musicals, least of all musicals like Fiddler, which plays on every inclination toward cheap sentimentality I possess.

To begin with, Fiddler — the traditional version, in English — offers me the standard array of nostalgia-related feelings, because for me, it is inextricable from childhood and simplicity and family. I have watched the 1971 movie starring Topol more times than I can count. I played Tzeitel, Tevye’s eldest, in high school. For over a year, my middle school alarm clock woke me up to “Tradition.”

More than nostalgia, though, Fiddler offers the bonus benefit of making me feel like a very good Jew. I do not have to confront my guilt at rarely attending synagogue or wonder whether there is a God and, if there is, why he has yet to beset locusts upon the White House. I do not have to cringe at some of the things the Torah insists upon or wish that I knew more Hebrew.

Fiddler weaves into its text simple prayers that I know, melodies my parents sped through on Friday evenings because I was running very late to whatever boring plans I had double-booked over our Shabbat dinners. It gives me squeaky violins that stir something deep inside of me. It shows me my proverbial ancestors, earnest and anguished. And I can claim their sorrow, mourn our collective exile, without knowing any of it.

At the performance of Fiddler in Yiddish I attended with my dad last summer, I found myself profiling my seatmates, curious if anyone here could genuinely lay claim to the onstage dialect. I don’t have the demographic statistics. Anecdotally, I heard only English at the act breaks, watched a lot of crisp white button-down shirts rustle next to programs that contained a long list of donors, names that perhaps once populated a shtetl like Anatevka.

Twenty-first century Jewish America filled the theater with cheers, rewarded every punch line. Critics lauded the production. In his New York Times review, Jesse Green trumpeted the show’s ability to offer “a kind of authenticity no other American Fiddler ever has.”

We all wanted to stake our claim to this production. Even the most discerning of intellectual Jews — those who usually exempt themselves from the Fiddler fandom because of the musical’s reductive take on the immigrant experience, its sugary melodies and tokenizing motifs — could buy into Yiddish Fiddler. This was the language of our ancestors; these noises their spittled-filled messy back-of-throat noises.

But I know how Fiddler lands when I see myself in the people onstage. And that isn’t what watching Fiddler in Yiddish felt like.

“It couldn’t sound more right as spoken by these characters — or as sung,” Green wrote in his review.

It sounds correct, given its setting and characters, because it doesn’t sound like anything most of us recognize at all. To the majority of the audience, the words were little more than a subliminally familiar gibberish, replicating the cadences we learned in bedtime melodies passed down to us, in the punch lines we might have heard from elderly relatives.

Unlike the alienation I have felt watching other performances in other languages, this sense of distance was not a matter of failure to understand. I have downloaded the complete text of the English language production into the inside of my brain. I barely glanced at the projected translations; no sooner did I hear the mushy Yiddish phrases than I transferred them in my head to clean English.

Fiddler in Yiddish, unlike some other foreign plays, does not actively separate the viewer from the action. Its effect is much gentler, in that it forces us to confront the gulf of understanding, the chasm of experience, that separates them from us. Centuries of assimilation and comfort. Not a distancing from story but a laying bare of distance that already existed, a berth that is too wide to traverse.

Like Green, I sobbed at the end of Fiddler, when the cast waved goodbye to Anatevka and hello to America. I cried because I could not see myself anywhere on that stage, because the way of life it depicted felt cosmically far from my own.

Perhaps this is the appeal of the show: the perverse ache wrought in feeling this identification erased.

— Magazine writer Eliya O. Smith can be reached at eliya.smith@thecrimson.com. Follow her on Twitter @eliyasmith. This is the first installment of her column, Will There Also Be Singing?, about theater.