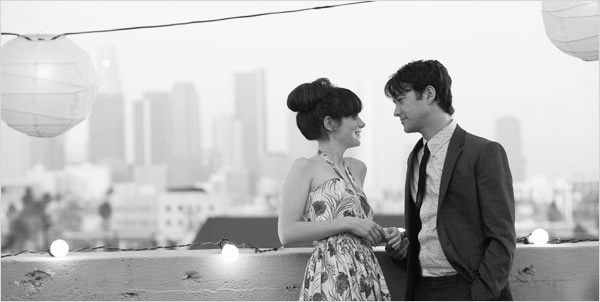 In June, I watched “500 Days of Summer” alone on my bed. I cringed as Tom Hansen (Joseph Gordon-Levitt), head-over-heels in love, decides to stay in a relationship with Summer Finn (Zooey Deschanel), who’s made it clear from the beginning that she doesn’t want anything serious.

Later in the movie, a while after Summer finally breaks up with Tom, he bumps into her, and sees that she is engaged. He is devastated. Summer had previously mentioned to Tom that she “doesn’t believe in relationships” — and here she is, about to get married.

“Either she’s an evil, emotionless, miserable human being, or she’s a robot,” Tom says.

Last week, I had dinner with a friend. He told me how, in computer science, there’s a problem called the stable matching problem, where, given ranked preferences between two sets, you want to find a set of matches — mappings from an element in one set to an element in the other — where, in each match, neither element prefers any other element more than the one to which it is already matched.

He told me that there’s a way to solve this problem by having one set be the “choosers” and one set be the “acceptors.” In each round of the algorithm, each “chooser” proposes to match with the “acceptor” that it prefers most, and if the “acceptor” prefers the “chooser” more than every other element that has previously proposed to it, they get “engaged.” This algorithm continues until everyone is engaged. In this case, everyone is guaranteed to end up with a match, and all the matches are guaranteed to be stable.

This algorithm seems similar to how traditional heterosexual relationships start, when men “choose” and women “accept.” In real life, men ask women out, and women choose from a pool of men who are interested in them. For each woman, the “rounds” continue until she finds someone who is better than everyone else she’s dated.

And he said that this result always happens; it’s the way the algorithm works.

I was talking with another friend earlier this month. We talked about the idea of “settling.” This topic has come up in multiple conversations with multiple friends, even though we are in our early twenties and we have years of dating ahead of us.

“I think women settle when they don’t date enough people before they get married,” she said. “They become content with the option that they already have, and they don’t know that there are other, better options out there.”

“Maybe we should ask people out more often; date more people,” I said. “Maybe that will lower our chance of settling.” I thought about about the stable matching problem again. As women, how can we get what we want if we can only pick from men who want us first?

I didn’t like Summer when I watched the movie. She seemed like the girl I never was: too perfect, too organized, too professional. I also didn’t like her relationship decisions. Why couldn’t she just have left the relationship when she realized she didn’t like him that much? Why did she have to break his heart in such a seemingly cruel way?

After I watched the movie, summer came and passed. June, July, August. My own dating life waxed and waned. I drifted even further and further from the version of Summer Finn that the movie portrayed. My friends and I called frequently; we talked about love and loss and friendship.

It’s mid-August now, and I have also been a little bit heartbroken. Maybe that is why, now, I have been thinking more about Summer and the stable matching problem. Maybe I should look at Summer differently, I think. Maybe she doesn’t deserve all of the blame.

The solution to the stable matching problem puts women at a natural disadvantage — they end up with men they comparatively prefer less, after all. Maybe Summer is noncommittal because she is aware of this disadvantage, and believes what my friend said — that women can decrease their likelihood of “settling” by dating more people.

And Summer’s clear to Tom about her intentions: She mentions on multiple occasions that she isn’t looking for something serious, that she doesn’t believe in love at first sight.

But at the same time, Tom consistently acts like he can change her. He gets obsessive. His life starts revolving around the idea of her, the idea of falling in love. He never really thinks of Summer as a real person.

I find a tweet where Joseph Gordon-Levitt, who plays Tom, writes:

I still don’t know if we should be more like Summer. But I think we can all learn from her. The movie, after all, is told from Tom’s perspective, and focuses on Tom’s obsession and heartbreak. Of course we would sympathize with Tom, because when Summer ends the relationship, we see Tom’s pain on the screen, not Summer’s. However, Summer’s perspective is just as, if not even more, valid: In a dating system where the odds are against her, she might just be trying to overcome the odds.

I wonder why I didn’t realize this the first time I watched the movie.

The stable matching problem is a model. And models for real-life phenomena aren’t perfect. But I think that, just like we can learn from Summer, we can learn from the stable matching problem, because it very roughly quantifies how women and men choose their partners, and can help us understand what kind of power dynamics — in a system where men are the initiators and women are the acceptors — are in place. So despite its imperfections, the stable matching problem gives us a reference point to which we can compare what we see and experience in real life. It makes us more aware of our own biases, of how we feel about and how we perceive relationships that don’t necessarily fit into the dynamics we expect.

My first reaction after watching “500 Days of Summer” was that I didn’t like Summer for sending mixed signals, for not committing, for always looking for someone better, and that I didn’t like Tom, either, for being too obsessed with love. But how would I feel if the genders were reversed — if the man were more noncommittal, and the woman were more anxious, and, dare we say, “clingy” — would my societally pre-programmed brain be more comfortable with these traits, because they’re more familiar to me? Would I find less fault in them; would I feel like the pairing were less deeply flawed, and more as a natural byproduct of society? And what if the movie had been told from the female perspective instead? Would I still have such negative feelings about Summer?

Taylor Swift, having been criticized for more than a decade for her “serial dating” habits, sings on her new album “Lover” about how she would be publicly perceived if she were a man: “I would be complex, I would be cool / They’d say I played the field before I found someone to commit to / And that would be okay for me to do,” she says. Maybe Summer, too, instead of being a selfish and emotionless commitment-phobe, is merely “playing the field”; maybe she is just trying to succeed in a system where the stable matching problem says that she won’t. I want to believe that women don’t have to have Summer’s traits to find a partner they are happy with. But maybe her strategy works: In the movie, she ends up with the love of her life, after all. I still don’t like Summer that much, but maybe we shouldn’t fault her for what she does.

My friends and I talk and theorize, but in reality, I don’t know how scientifically relevant the stable matching problem is in the context of heterosexual relationships — I looked it up, and I couldn’t find much. But, after thinking about Summer for a while, I thought back to the conversations my female friends have had about “settling.” Then, I asked the other friend, the male friend who told me about the matching problem in the first place, whether he’d ever worried about the concept of settling for someone in a relationship — whether he’s even thought about it.

He answered with a clear and definitive “no.”