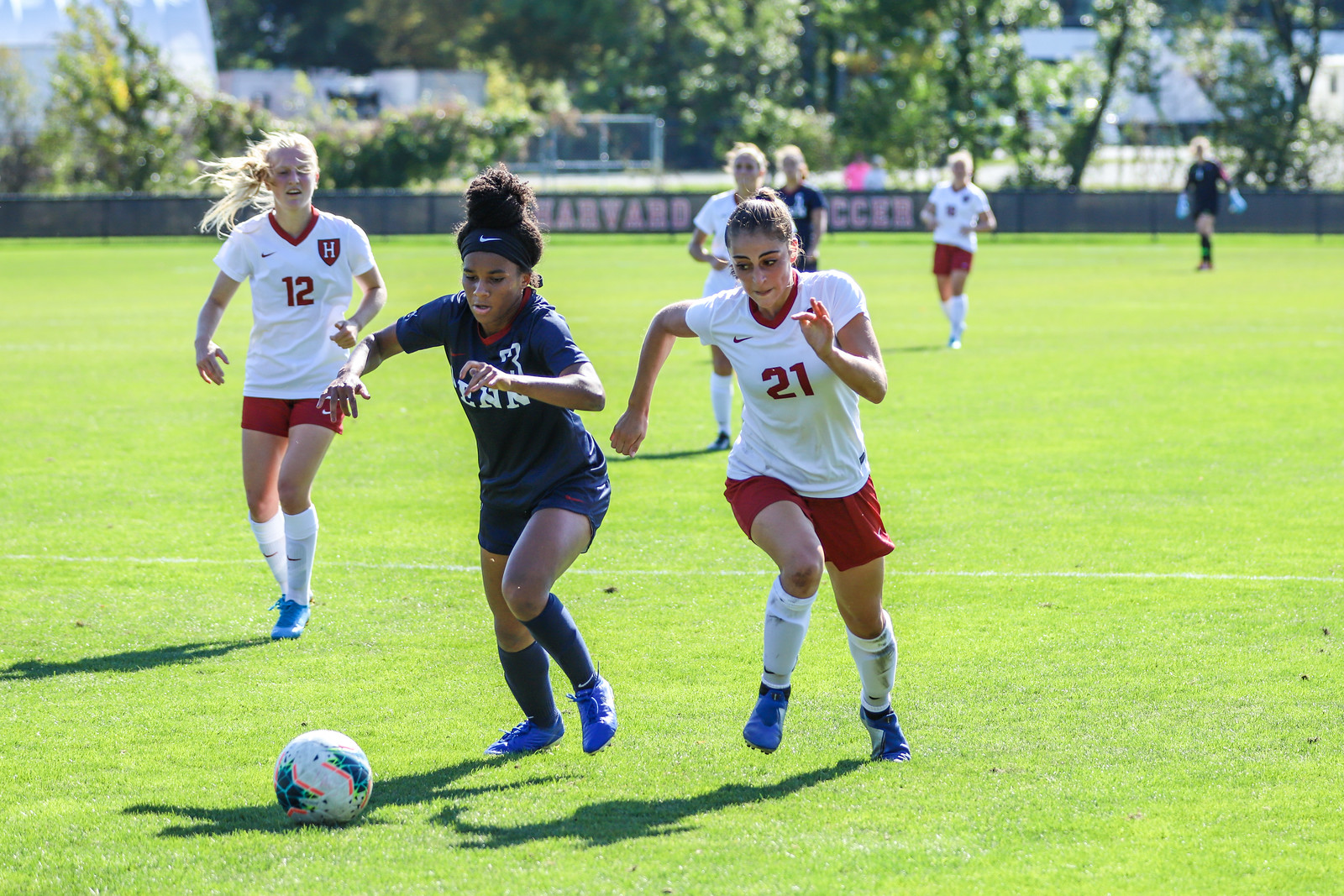 Gabby DelPico maneuvers by a Penn defender on Sunday. The freshman forward scored the sole goal of the match to help Harvard to its fourth-straight win. By Quinn G. Perini
By Lev Cohen, Crimson Staff Writer

Harvard women’s soccer opened Ivy League play with a big 1-0 win over reigning Ivy League co-champions Penn in front of an announced crowd of 1,456 that filled the bleachers at Ohiri Field.

A year after two overtimes were not enough to break a 0-0 tie between these two teams in Philadelphia, freshman forward Gabby DelPico made sure there would be no repeat, slotting home a low cross from junior forward Lauren Raimondo in the 72nd minute to break the deadlock.

“I think we’ve just got a little bit more quality this year in the attack,” head coach Chris Hamblin said. “I think we can break teams down in different ways. I don’t think we were able to be as composed in the first half, but eventually we’re going to wear them down. We did, and Gabby showed up for a fantastic finish late in the game. I think it was deserved. I think we earned that.”

It was the final game of a perfect three game homestand for the Crimson (7-2, 1-0 Ivy) and Harvard’s fourth straight win overall. It was a strong overall performance for the Crimson, which dominated the Quakers (5-3-1, 0-1) in the first half, controlling possession, piling on the pressure, and outshooting Penn 8-1 while creating the only four shots on goal of the half.

“I was really proud of how we started the game and took the game to them,” Hamblin said. “The wind played a factor, so we had more of the territory in the first half, and unfortunately we couldn’t find the answer, we wouldn’t find the goal.”

Despite the strong overall first half performance and in particular the driving runs and dangerous crosses that typify a performance from junior playmaker Murphy Agnew, who was terrific again on Saturday, Harvard struggled to create particularly great chances.

But if a team dominates the game for long enough, as the Crimson continued to do early in the second half, the goal usually comes. While Penn’s defense was sound, Harvard’s near-constant presence in the opposing third finally paid off when Raimondo picked out DelPico in front of goal and gave the Crimson the goal it never found in Philadelphia last year.

It was DelPico’s fourth goal of the season, tying her for the team lead with fellow freshman standout Angela Caloia - who was also credited with an assist on DelPico’s goal - and sophomore Sophie Hirst.

“It was a combination of good play all around throughout the team,” DelPico said. “Lauren [Raimondo] did exactly what we practiced in warmups, which is dribbling inline and then dropping it back in, and then I finished.”

After being held in check for most of the game, Penn’s attack woke up after the Harvard goal, unleashing six shots, including its first three on goal of the match, in the game’s final 15 minutes to quadruple its overall shot total. The Crimson defense, which had been so assured for most of the game, struggled to clear the ball late, inviting more pressure from the trailing Quakers.

Penn’s late pressure created a fantastic, tense atmosphere, and on more than one occasion the Quakers seemed set to knot the game at one and send it to overtime. But Harvard’s senior goalie, Kat Hess, stood tall in goal, displaying calm and control.

It was only fitting that Hess, the star of the game’s last 15 minutes, made her final save as the whistle blew. She fired the ball into the air and rushed off to celebrate the perfect start to the league season with her teammates.

The Ivy League rivals continued a recent tradition of low-scoring battles, as there have been just three total goals scored in their fixtures over the last four years, with the 0-0 draw last season surrounded by 1-0 finishes.

DelPico, for one, is eager to build on her first-ever Ivy League game and goal.

“I think there’s definitely a lot more nerves in the air [in Ivy League games],” DelPico said. “You can feel everybody being tense and having high expectations, but I think what it came down to is us just playing our game we know how to play, treating it not like it’s this huge thing but playing the same way we’ve been playing throughout the other games.”

The Crimson will embark on a three game road trip starting next weekend when it faces Yale, which notched a big 1-0 win of its own this weekend against Princeton. While the Crimson and Bulldogs finished fourth and seventh respectively in the Ivy League last season, it appears that the rivals may be headed for greater things this year.