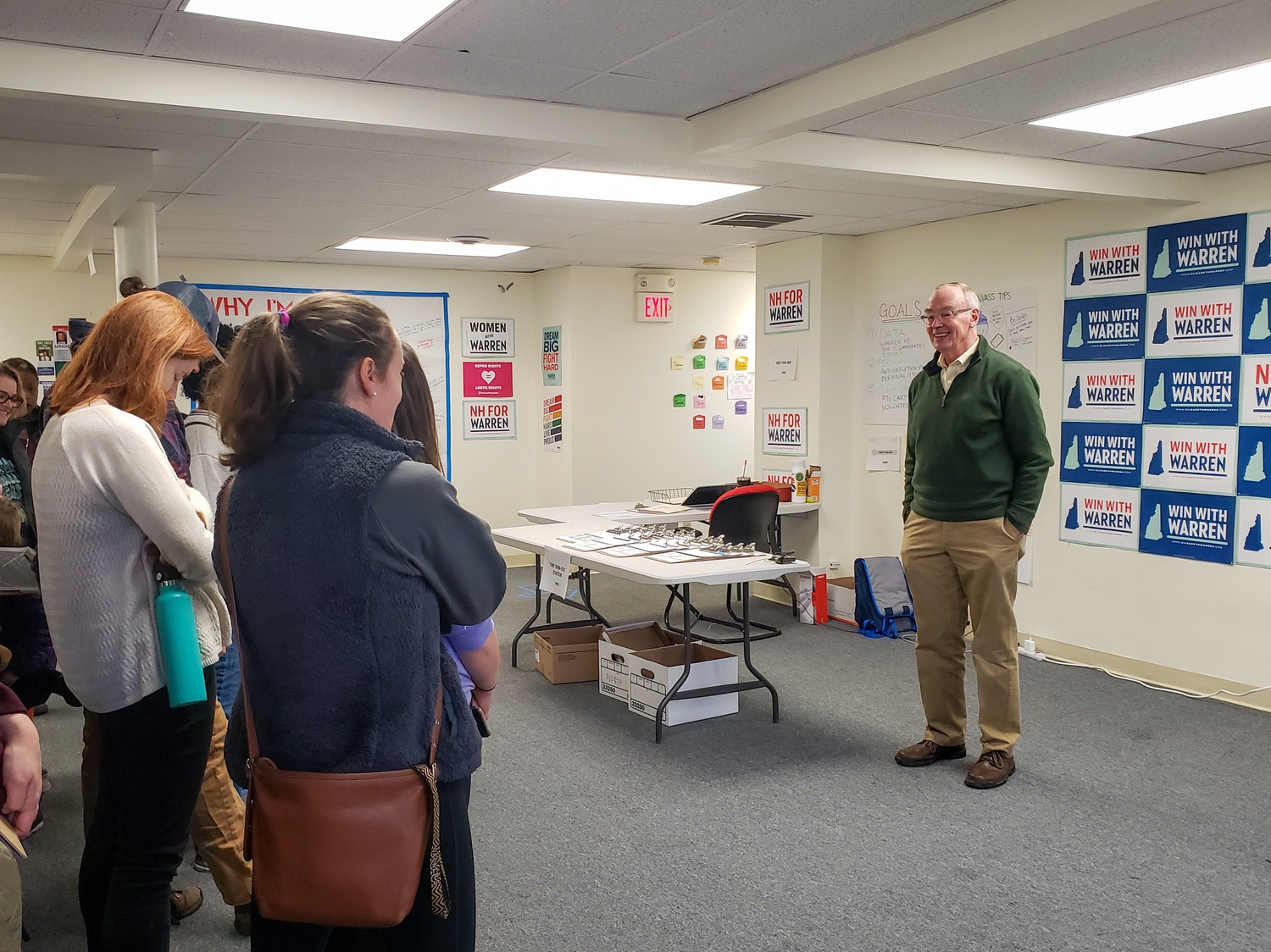 With Warren off the campaign trail while she attends the Senate impeachment trial of President Donald J. Trump, Mann — Warren’s husband of 39 years — has stepped forward as a surrogate. At the event in the campaign’s Manchester field office, he said the Massachusetts Senator is dedicated to working-class families, a demographic that Warren has sought to court.

“This is not a career move for her,” Mann said in a speech to supporters. “This goes down a lifetime of research, studying, thinking about the problems facing working families and because of the depth of her background, because of the fact that her research led her to always see people whose issues she studying and designing to be effective, that sets her apart from everyone else.”

Mann lauded the volunteers for their work campaigning for the policies Warren “cares about and talks about and fights for.” Reminding canvassers that they are on the “front lines” of Warren’s campaign, Mann said the key to reaching New Hampshire voters is engaging with locals.

“As with any grassroots campaign, it really is face to face,” Mann said. “It involves people who are passionate about the issues and about a candidate. They’re passionate about the future on behalf of that candidate and communicate that passion to everyone they see, whether it’s through knocking on doors or through casual conversations.”

The New Hampshire primary is Feb. 11. Warren is currently polling fourth among seven Democratic candidates in the state, according to a January CNN poll.

Mann also described Warren’s character on the trail and at home.

Before leaving to canvass, Veronica Joyce, a Manchester resident, said she had never seen Mann in person before but could see why he spent time campaigning for Warren.

“He’s so supportive of her,” Joyce said. “He seems very calm while also wanting change to happen and wanting people to know the truth about what she’s saying and what she’s putting forward.”

Ben Moser and Andrea Goetschius traveled from Norwood, Mass. with their five-year-old son to help canvass. Moser said they were drawn to Warren’s campaign because of her progressive policies.

“It’s the way that all of those policies fit together to buoy folks,” he added.

Moser and Goetschius said they hoped they could instill their values to their son through their work with the Warren campaign.

“He’s just old enough that I want him to at least remember that we tried,” Moser said.