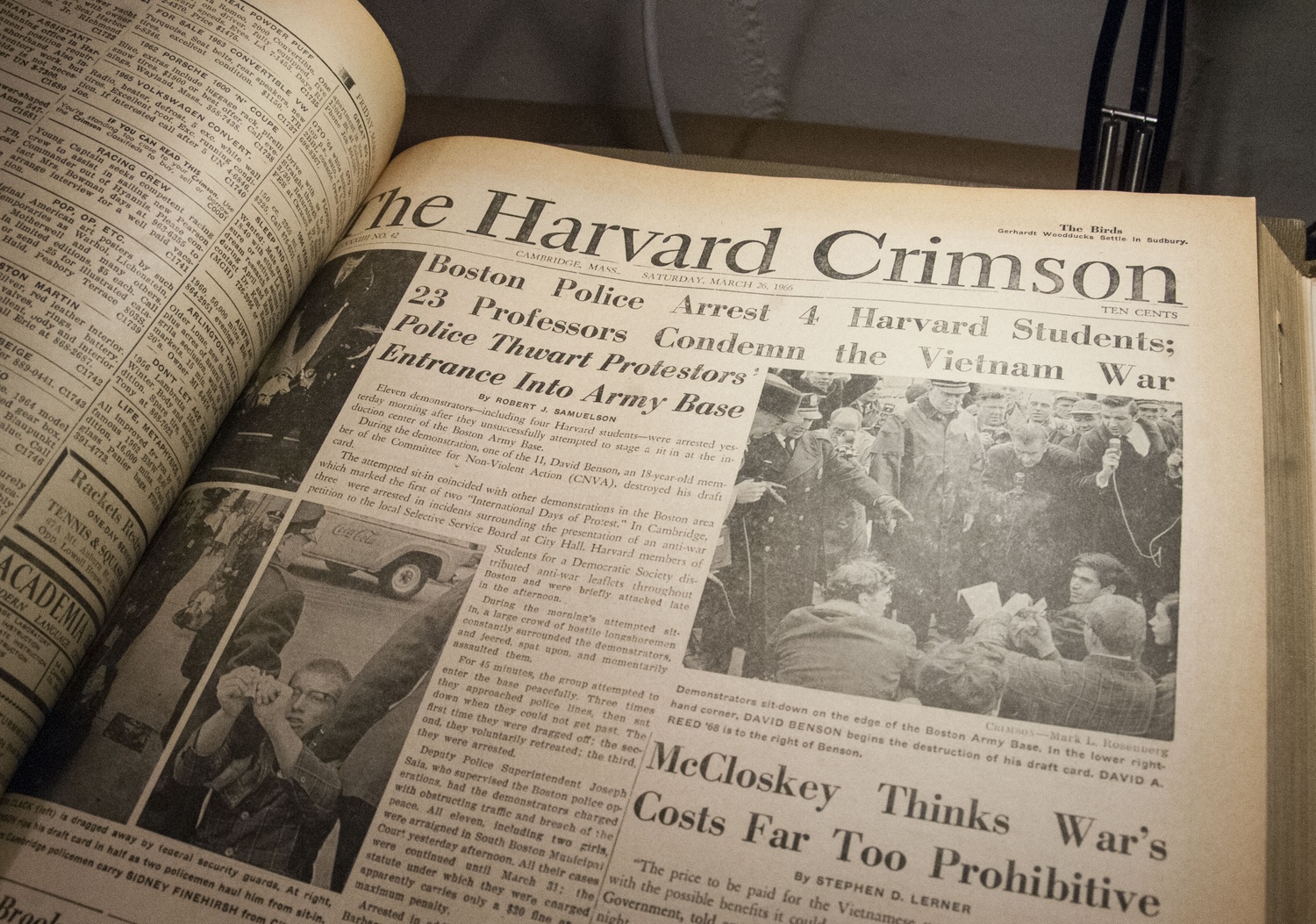 The magazine is steeped in Vietnam Era social criticism, and many stories have to do with the war, protests surrounding the war, or those imprisoned for refusing to fight in the war. By Sidni M. Frederick
Advertisement
Advertisement

The history of the Old Mole, the leftist magazine run by Harvard students from 1968 to 1970, is largely composed of hearsay and conflicting stories. Created as a means to criticize the government and social establishments in the unrest of the Vietnam War era, the Old Mole gave Harvard students an outlet with minimal censorship.
By Sam W. Trottier

The history of the Old Mole, the leftist magazine run by Harvard students from 1968 to 1970, is largely composed of hearsay and conflicting stories. Created as a means to criticize the government and social establishments in the unrest of the Vietnam War era, the Old Mole gave Harvard students an outlet with minimal censorship.

While the founding of the magazine is not entirely clear, the Old Mole, throughout its short lived existence, became a cultural and literary reference for Cambridge residents. In 1969, it published a letter stolen from the files of Franklin I. Ford, the Dean of Faculty at the time, detailing his plan to convince the faculty to continue to give academic credit for ROTC courses.The leaked letter angered the student body and played a large role in Ford’s eventual resignation. While this cemented the Old Mole’s legacy, it was hardly the magazine’s only notable facet.

On old, sallow pages, a poem begins “On acid I wept,” and goes on to call Nixon a pig. A classified section beckons, “To Bill in Cape Cod, who gave me his gas mask at the Smoke-In… I love you. Please write.” Excerpts like these were common in the Old Mole.

In the Aug. 6, 1970 issue, Doug McCormac wrote a piece called “Amerika to Viet Nam: ‘My love for you has gone away.’” In it, McCormac relays his experiences as an intelligence officer with the Green Berets in Vietnam. It addresses middle class guilt, the military-industrial complex, and anti-Vietnamese racism, which he divides into two categories: that of G.I.s and that of the greater American war machine.

McCormac’s essay represents the Old Mole at its best. Unpublishable elsewhere, pieces like this were the magazine’s raison d’etre. McCormac’s piece also reflects common Old Mole themes: The magazine is steeped in Vietnam Era social criticism, and many stories have to do with the war, protests surrounding the war, or those imprisoned for refusing to fight in the war.

Additionally, the Old Mole published essays about the women’s movement, racial unrest, police violence, prison conditions, strikes, welfare, and labor. In between are letters to the Old Mole (some from fans in Vietnam and elsewhere, some from critics who wonder whether the Old Mole represents “the people”), ads for anything from rental cars to stores selling “astrological, occult, and metaphysical” objects, community events, and classifieds.

It’s an odd visual. An ad for a used guitar sits a few pages from an article likening cops to pigs. Next to that sits a comic in which an alligator discovers a money trail linking the American Society for the Prevention of Cruelty to Animals, the alligator-skinning industry, and the Rockefellers. But the chaos of the magazine is not without a certain charm: The Old Mole’s fierce individualism inevitably makes it a mixed bag, but it also gives its gems a stumbled-upon quality, making them seem especially bright and unique.

After the polarization and split of Students for a Democratic Society, the prominent New Left activist movement, the Old Mole faced a serious reckoning, as it was funded and run vastly by students on the (still quite left) right wing of the Harvard SDS branch. The right wing of the SDS was also experiencing infighting, placing the Old Mole at the center of several feuding factions. And in 1969, it was revealed that the magazine was partly funded by a front corporation, Cambridge Iron and Steel, sowing mistrust amongst the readership.

In 1970, police allegedly threatened the Old Mole office, saying, “If you want guns, we’ll use guns. We’ll wipe you out.” The same year, the Cambridge Police had raided a local commune and arrested its occupants.

The Old Mole marked its official conclusion in the fall of 1970. “A lot of people were dissatisfied with what was going on in the paper. They thought it was too closed, and that we had no right to speak for the people,” one member of the collective explained at the time.

It seems obvious, however, that the Old Mole’s niche had dissipated. The Old Mole was a paper catered toward a specific movement, though it claimed to encompass more — and that movement was fueled largely by one thing: the war. Once Nixon assumed office and began withdrawing troops from Vietnam, the movement, and thus the Old Mole, began to die out.

A Crimson article from 1970 reported that the Old Mole’s staff intended to form a new collective dubbed the New Old Mole, but little evidence exists to suggest that this ever came to fruition.

The years that followed witnessed the further marginalization of the activists who had led the Old Mole. In 1971, two ex-staff writers were subpoenaed by a Senate Subcommittee and went to Washington to testify. Though the details were unclear at the time, the writers suspected their subpoena had to do with Cambridge Iron and Steel.

Later, the Progressive Labor party distributed a leaflet denouncing the two writers for supposedly revealing internal SDS information to the Senate subcommittee. Michael S. Ansara ’68, one of the writers named in the leaflet, denied the claims, saying that the Progressive Labor party attacked “everyone in the world who is trying to make a revolution which means something.” He added, “from now on I’m going to treat PL just like I treat the cops.”

In these scuffles were the dying embers of the movement and the official end of the Old Mole.