Listen Closely to Ono's ‘Echo on the Bay’ 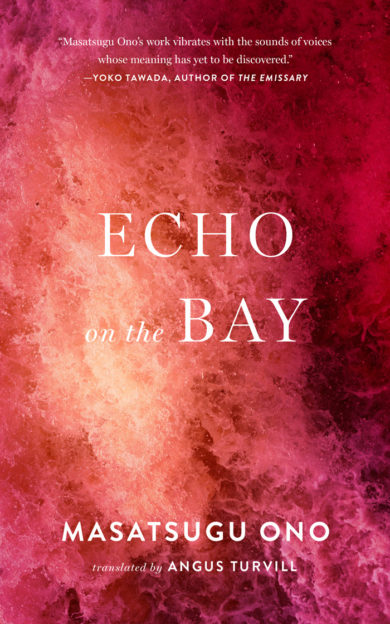 Cover art for "Echo on the Bay." By Courtesy of Center for the Art of Translation
By Beverly J. Fu, Contributing Writer

With its magical realist style, thematic substance, nuggets of oral history, and awkward dad jokes , “Echo on the Bay” is a challenging novel to categorize. From the vantage point of the new girl in town, Miki, we are introduced to the intricate multigenerational story of Oita Prefecture.

“Nothing serious happens,” begins Masatsugu Ono’s novel. Yet, readers are held in suspense for all 150 pages of the story, acutely aware that there is more than meets the eye to this sleepy fishing town. An abandoned boat in the bay. A sodden village celebrity. Not to mention a budding romance between teenage Miki and her 24-year-old social studies teacher.

"People who forget the past repeat it. We have to remember. We have to atone. And now the opportunity had come”: Throughout the book, the time oscillates between 1940s and present-day Oita, guided in large measure by the Silica Four, a gossipy group of four village elders with silicosis. These elders live quite comfortably off government pay-outs and congregate at Miki's home to drink with her father, the police chief. Gradually, they divulge the darkest secrets of this sleepy fishing village. A trigger warning would help, as Masatsugu Ono embeds multiple accounts of physical and sexual abuse into the narrative and vividly describes many atrocities from the Japanese occupations of Manchuria and Korea.

There are several reasons why “Echo on the Bay” is a seriously difficult read, with its lack of formal structure and signposting given that the book is told as one long chapter, senseless cruelties, uncomfortable scenes, and its dissatisfying denouement. At one point, Miki voices her own exasperation with the messy narrative:

"I'd once seen an NHK Education TV show in which a western ethnologist described the frustration people of his profession feel when they can't get at the information they're looking for. I was beginning to understand that frustration myself,” Ono writes. “Just when you think your informants are about to tell you something, they go off on a tangent, recounting anecdotes of no direct relevance … The ethnologists begin to think that their sincere attempts to discover truths about a society and culture are being deliberately obstructed."

A reader might find him or herself longing for further character development, as we are given rather limited airtime with each member of the village. Ono, however, is liberal with his descriptions of the coast, taking pains to ensure the reader is under no illusions that Oita is a charming seaside village. On the contrary, it reeks of manure, fish, and rotten bodies.

Ono writes, "When I get out of the car, there's a dry smell, like manure. Flies buzz around my head, their abdomen and wings bright in the sunshine — rough, black beads of light... There are flies on my sweaty thighs and calves. They keep lifting off and resettling, sipping at the perspiration."

Despite the stench seeping through the novel, Ono continues to masterfully lure readers in with sleek prose and clever metaphors. Make no mistake, “Echo on the Bay” is for the persevering, patient, and curious reader. Comparable to Gabriel Garcia Marquez's “100 Years of Solitude”, it might help to sketch up your own family tree to follow along. Remember, there is a reason for everything: from the way the village drunk’s fingers shake like needles of a broken compass to the soured relationship between the local assemblyman Yoshi-ni and his sister, Hatsue. Listen closely to Ono’s “Echo on the Bay,” and you just might trace its source.