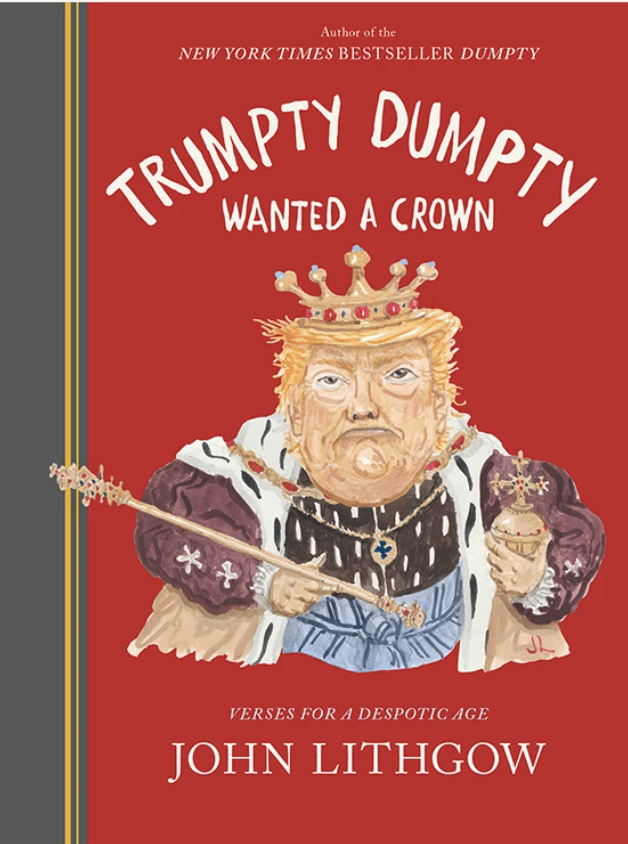 Over the course of his nearly five decade career, John Lithgow has played a plethora of characters, ranging from an apprehensive banker to an incredibly short and incredibly evil animated villain. Most recently, he assumed two interconnected roles: a poet with a razor-sharp wit and masterful command of rhyming couplets as well as an illustrator who renders risible cartoons of boorish politicos. Lithgow’s flawless performance as both an author and a caricaturist can be witnessed not by way of the silver screen, but through the pages of his latest work, “Trumpty Dumpty Wanted a Crown: Verses for a Despotic Age.” Following Lithgow’s first book of political poems (“Dumpty: The Age of Trump in Verse”), “Trumpty Dumpty” is a clever, pertinent, and uproarious poetic lampoon of the second half of President Donald Trump’s disastrous reign — it is an unapologetic masterpiece far more deserving of a crown than “Dumpty,” the text’s primary target.

The book begins with a collection of poems examining Trump’s impeachment in late 2019 and navigates its way through the bevy of misjudgements, oversights, and lies that form the fragile membrane of the current administration. With the exception of Lithgow’s introduction, the satirization of Trump and his cohorts’ instability and incompetency is realized in the rhyming couplets, a literary device incorporated into all 30 poems. Although the repetitive usage of one rhyme scheme may initially seem unimaginative, Lithgow manages to craft poems that are not only distinctive, but also hilarious, engaging, and surprising.

What characterizes each poem’s allure, however, is its duplexity: They simultaneously introduce a note of levity and deride the socio-political circus that is the Trump administration. As one reads Lithgow’s diverse collection of parodic and snarky laments, they are invited to engage in a guffaw-inducing affair, one which welcomes those who are neither fluent in political jargon nor possess ample knowledge of governmental proceedings.

This accessibility allows “Trumpty Dumpty’s” commentary to have an ubiquitous influence that can be felt by all readers. Lithgow’s inclusion of brief profiles of the corrupt politicians he skewers (poetically, of course) removes the potential for misinterpretation — Lithgow’s agenda, unlike Trump’s, is clear and refreshingly honest. Politicians are not given the benefit of the doubt, glorified, nor defended. Instead, their transgressions are listed in “Trumpty Dumpty,” providing readers with a rare literary portrait of a deglamorized United States.

Contributing the most to the creation of this portrait is not the incorporation of descriptions, but instead the addition of cartoons. Due to the text’s short and succinct nature (it is roughly 54 pages), the illustrations append another layer of comedic element to the piece, which would otherwise be rather sparse. What is impressive about Lithgow’s line drawings is how well they complement the text. For instance, placed beside “Recipe for Disaster” — a poem about “the viral new cuisine, COVID-19” — is a graphic of a solemn-looking Trump cooking what looks to be eggs while donning a chef’s uniform. This is all set to the backdrop of a succession of doctors and nurses wearing PPE (Personal Protective Equipment). Other notable examples include Trump (wearing a USA hat) blowing COVID bacteria “bubbles” during a golf session; three politicians emerging from a toilet bowl; and — perhaps the most important one — a nude Trump, standing behind a group of police officers, staring into a crowd of Black Lives Matter protesters carrying signs stating "I Can’t Breathe," "No Justice No Peace," "I am Not a Threat," and “Racism Kills."

Despite its length and the relatively simple drawings, Lithgow is detailed, so much so that Trump and many of his associates cannot escape from being placed under scrutiny. Readers are presented with a myriad of politicos including Mitch McConnell (“the Tortoise”), Roger Stone (“Rueful Roger”), and Jim Jordan (“Buckeye Firecracker”). The poems dedicated to them, as with many of the others included in “Trumpty Dumpty,” are mired with factual evidence.

That said, “Trumpty Dumpty” does not seek to inform and neither reveals new insights into the Trump administration nor proves any given statement is untrue. Instead, Lithgow transforms the obvious into a creative and magnificent world that readers can escape to at any given moment. As Nov. 3 approaches and the stress surrounding the uncertainty of the nation’s future mounts, “Trumpty Dumpty” distracts readers from the ridiculousness of America and lets them make use of their precious time by engaging with a funny and informative text.